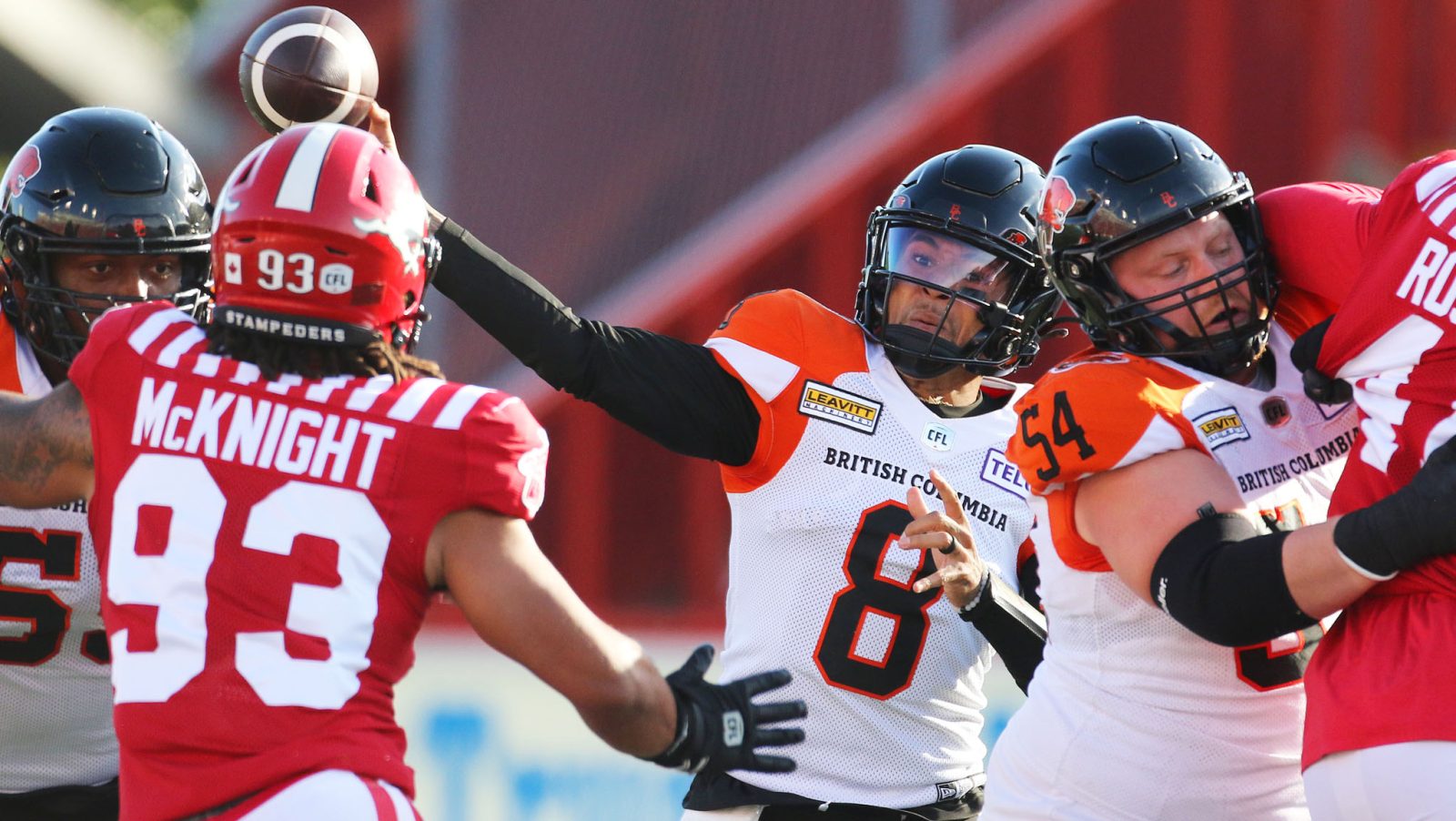 TORONTO — As the sky darkened and the stakes got higher on Saturday night, a perfect storm of pressure was brewing in Calgary.

The BC Lions saw their fourth quarter lead slip away, as the Stampeders outscored them 10-3. Tied at 23 with 21 seconds to play, the game could have been over were it not for a Rene Paredes miss on a 48-yard field goal attempt.

Through the most tense moments of his first win as the Lions’ starting quarterback, the 29-year-old sat on his new team’s bench with an expression that’s not that much different than someone re-watching an episode of their favourite comfort show on Netflix for the 57th time.

“It’s something I’m working on,” Adams told CFL.ca’s Jim Morris after the Lions’ practice on Tuesday.

“I’ve been saying it for a few years: I’m trying to get to that Ricky Ray coolness, that neutral space. I don’t want to be overly positive, or overly negative on myself or anything. I just want to let the game go…one play at a time and to stay neutral and let it come to you.”

“He gave us a chance to win, did a lot of good things,” Lions head coach and co-GM Rick Campbell told reporters after the game on Saturday night. “I was impressed with his steadiness, it was a calming effect for our team and the offence.”

The win proved to be a literal and figurative sigh of relief for Adams, who established himself as a top-tier starter in the league with the Montreal Alouettes in 2019. If you ever needed a reminder that absolutely nothing is guaranteed in football, let Adams’ 2022 season serve as the latest example. He lost his starting job to Trevor Harris in Week 2 and requested a trade to the Lions shortly after Nathan Rourke went down with his Lisfranc sprain in Week 11.

The Lions’ offence was the toast of the league with Rourke at its helm. After two games of the club trying to find its way with backup Michael O’Connor injured and leaning on short yardage specialist Antonio Pipkin, Adams helped get the wheels turning again in Calgary. It wasn’t a perfect performance — there were moments where he appeared to overthink situations and get caught holding the ball on Saturday — but it was a positive step toward the Lions getting back on track after losing their MOP candidate.

“It means a lot,” Adams told reporters after the game on Saturday.

“I’ve been through a lot, roller coaster type of year. We had a great week of practice. The guys took me in. I had a sh—- practice on Day 1, and the guys still stayed with me. Man, we just fought throughout the night, defence did their thing. It was a complete team win, it means a lot.”

Adams’ stay in BC can help let the rest of the league see what he’s capable of. If he can keep the momentum going with the Lions this year, even if Rourke returns from his injury to retake control of the team, it can only bode well for Adams’ CFL future.

While there may not be clear cut openings for starters when you look across the league right now, Adams can be the first to remind you that the quarterbacking landscape can change in an instant. The ones that stay calm amidst the chaos are often the ones that come out of it in the best shape.