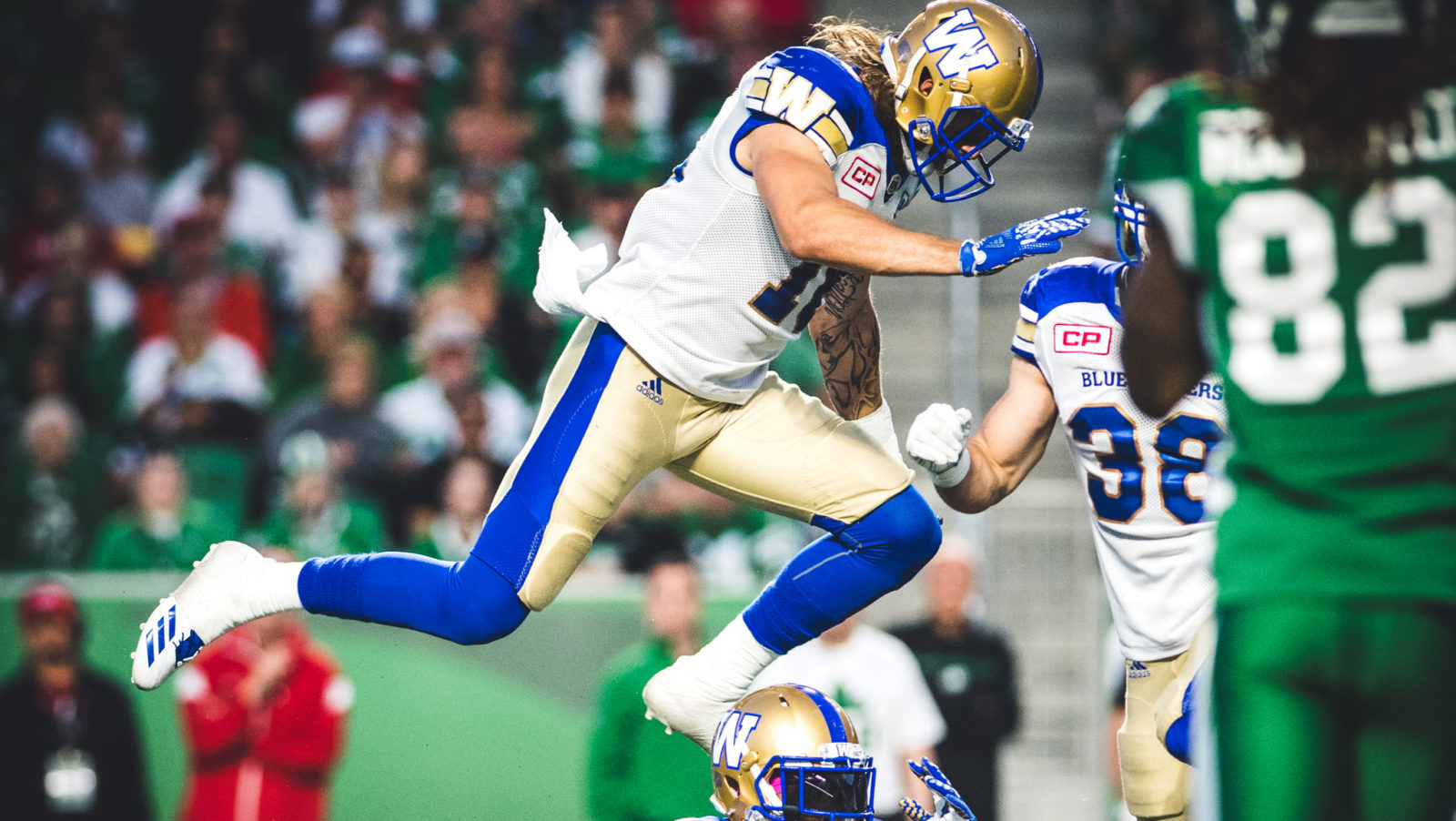 TORONTO — The Winnipeg Blue Bombers moved up one spot in the Nissan Titan Power Rankings after spoiling the Roughriders’ opening of the new Mosaic Stadium with a victory on Canada Day.

The Toronto Argonauts fell one spot after their loss to the BC Lions, but can they stop their fall? Meanwhile, the rest of the league stayed in the same position after their Week 2 performances.

It was another thriller between the Ottawa REDBLACKS and Calgary Stampeders last week but it was the Stampeders who came out on top, notching their first win of the season. Bo Levi Mitchell continued to shine as he looked to Lemar Durant six times for 126 yards and two touchdowns in the victory. The Stamps take a 1-0-1 record to Winnipeg this week to take on the Blue Bombers.

Diontae Spencer was the hero in the REDBLACKS loss to the Calgary Stampeders on Thursday night as the newcomer returned six punts for 148 yards and a touchdown, returned four kickoffs for 96 yards and caught three passes from Trevor Harris for 107 yards and a major score. The REDBLACKS will hope he continues his success as Ottawa hosts the Argonauts this week looking for their first win of the season.

A win didn’t come without a loss for the Edmonton Eskimos in Week 2. Running back John White left the contest on Friday night with what was later confirmed as an ACL injury that will sideline him for the rest of the season. Now the Esks will look to Travon Van – who had 17 carries for 50 yards in Edmonton’s win over Montreal – to carry the pigskin.

The Lions roared in the fourth quarter on Friday night in Toronto scoring 18 points on their way to their first win of the 2017 season. Defence was front and centre for BC as well, making life difficult for Ricky Ray and his Argonauts. With his nine defensive tackles, Solomon Eliminian moved into first place on the team’s all-time list. BC stays East for Week 3, as they take on the Montreal Alouettes on Thursday night.

A week of rest seemed not to bother the Winnipeg Blue Bombers as they defeated the Roughriders spoiling the opening of the new Mosaic Stadium. It was the clutch kick of Justin Medlock that sealed the deal for the Bombers in overtime while Matt Nichols didn’t show any rust in his opening contest of the season passing for 331 yards, four touchdowns and one interception. Keeping things rolling will be on Winnipeg’s mind this week as they host the Calgary Stampeders.

Although the Toronto Argonauts didn’t get the win at BMO Field on Friday night, their defence shone brightly against the BC Lions. The defensive unit as a whole held the Lions to just field goals until the fourth quarter as the changes that Marc Trestman and Jim Popp put into place have started taking shape. Getting their offence back to what we saw in Week 1 will be important this week in getting a victory as the Argos are in danger of falling into the bottom third of the Power Rankings.

There was no movement in the Power Rankings for the Alouettes this week as they fell to 1-1 on the season with their Week 2 loss to the Edmonton Eskimos. Darian Durant tossed 166 yards, one touchdown and one interception in the loss as he looked to Tyrell Sutton 12 times for 88 yards. The Als will look to improve on their 1-1 record when they host the BC Lions this week.

The Hamilton Tiger-Cats spent Week 2 on a bye but it was anything but uneventful. Terrence Toliver – one of Zach Collaros’ favourite targets – was placed on the six-game injured list with a suspected knee injury. This week when the Ticats head to Saskatchewan to take on the Roughriders, Collaros will have to look to his other pass-catchers – Luke Tasker, Brian Tyms and Kevin Elliott – as they search for their first win of the 2017 season.

Although the Roughriders dropped to 0-2 on the season with their loss to the Bombers this week, they’ve been close to winning both games. But, as we know, close doesn’t cut it in sports. Nic Demiski has emerged as one of Kevin Glenn’s favourite targets scoring a touchdown and hauling in seven catches for 82 yards last week. This week, the Riders host the Ticats as they search for their first win of the year.