Stress Test: Military-inspired training has Harris ready for anything 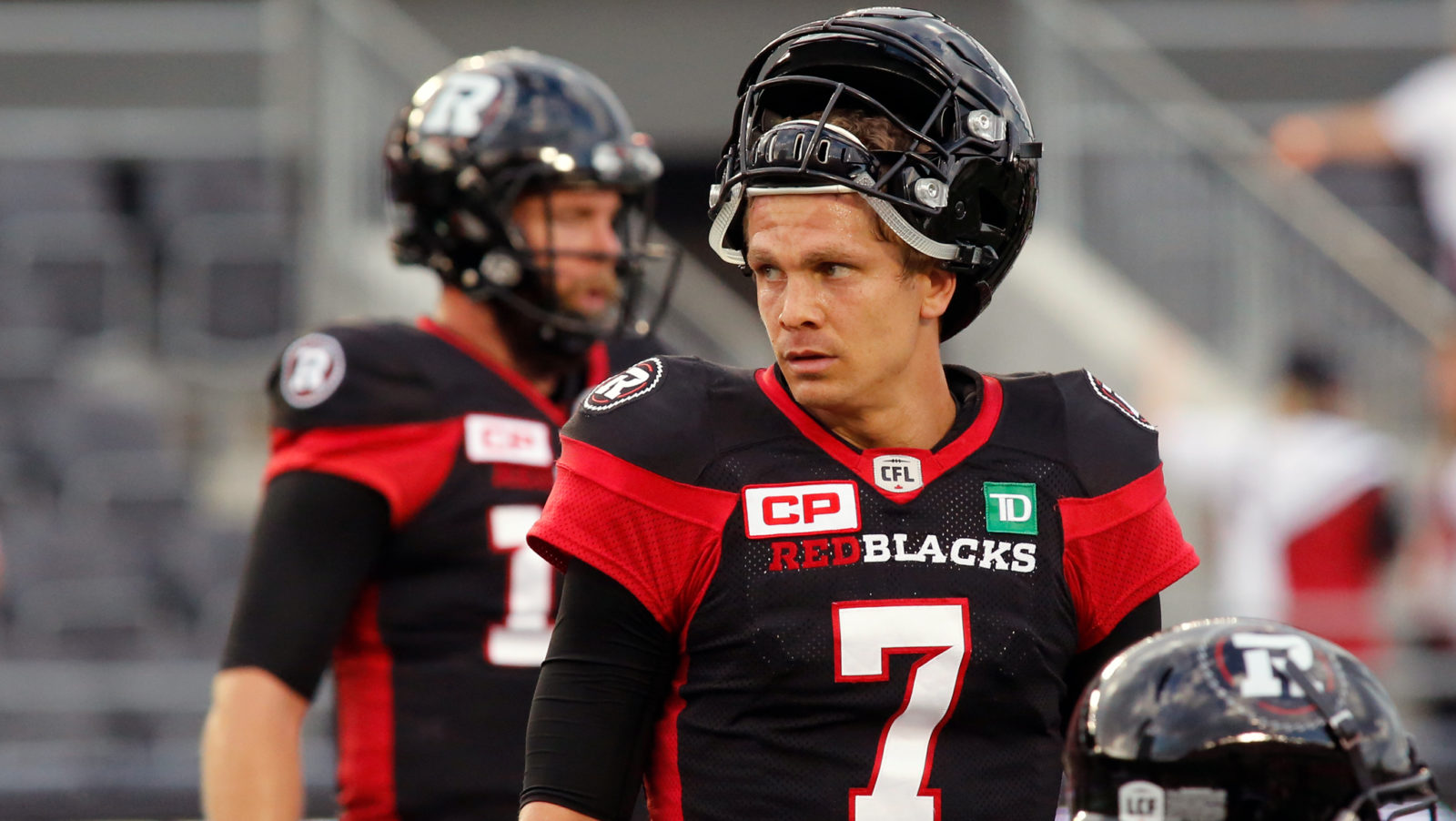 Stress Test: Military-inspired training has Harris ready for anything

There are people who still do not believe Trevor Harris has done enough to prove that he is a bona fide championship grade quarterback. Plenty of them, in fact.

For those who are not sold on the idea that he has cemented his place as a pressure-cooker pivot, to be counted on when the big games of November come around, the Ottawa REDBLACKS’ starting quarterback has a message.

He doesn’t disagree with you.

“I’d have the same opinion,” says Harris when asked to react to the notion that he still has much to prove. “I’d say, you know, ‘the dude’s good but he hasn’t won a playoff game and so let’s see how he performs’.”

“I relish that, though,” he adds, looking forward to the test. “I love that about the position.” 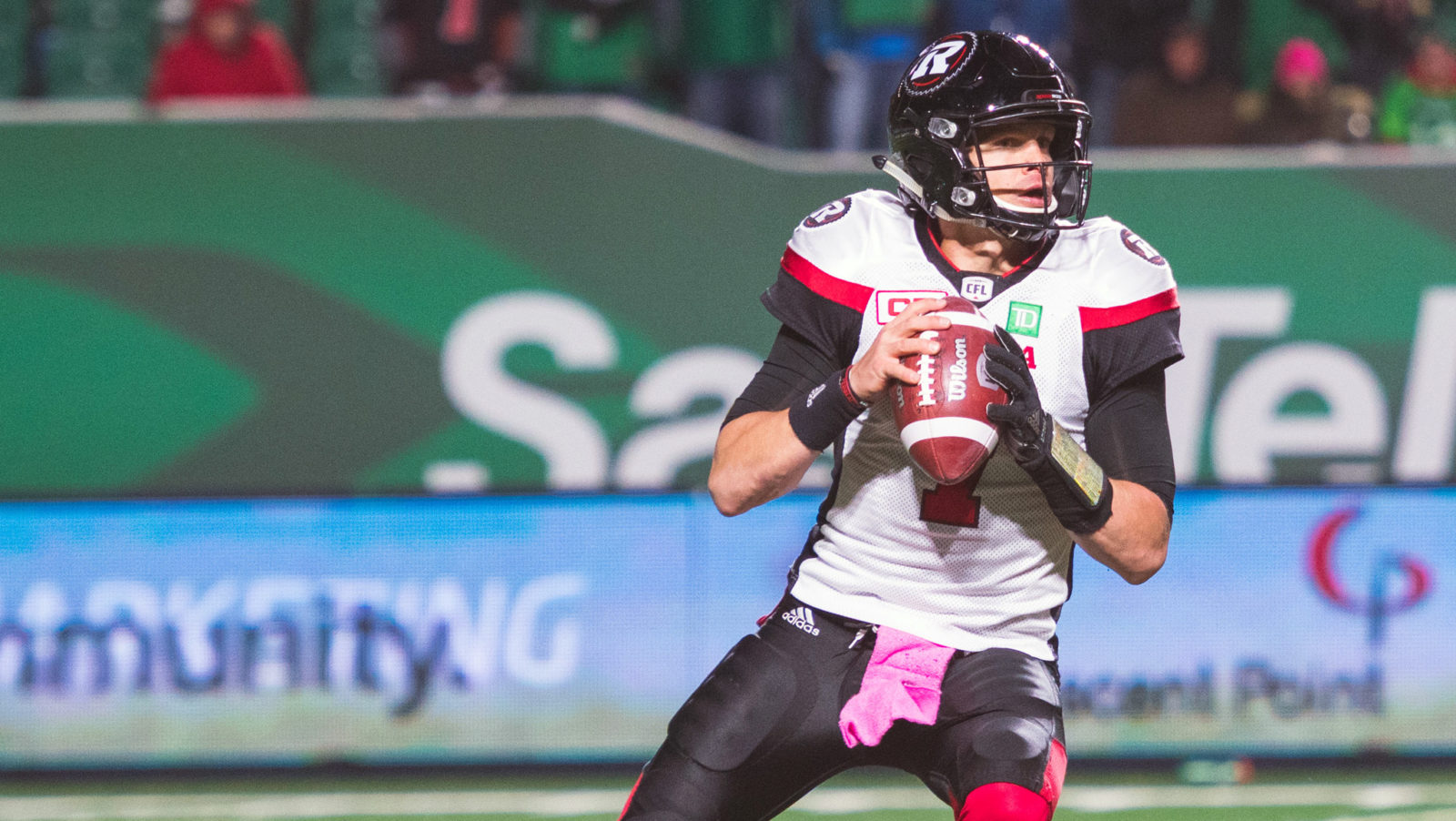 While Trevor Harris is enjoying the best season of his career, he knows the playoffs are how he'll be judged (Photo: Arthur Ward/CFL.ca)

The apprenticeship of Trevor Harris has long been over and now it is finally time to see if he has what it takes to step into the company of CFL quarterbacks who have shown that they can perform when the must-win stress is at its highest.

It’s not that he hasn’t proven he’s a fine quarterback. It’s just that he knows what everybody else knows, which is that the greats become the greats because they engineer impressive victories in the playoffs.

After having previous late-season auditions ripped away from him in both Toronto and Ottawa, the 31-year-old veteran believes he will step up and deliver this time around, and he is depending on something other than just his own maturity, determination and physical talent to make sure of it.

He’s also banking on something called combat brain training, employing the same theories and exercises that have been used to hone the mental acuity of Navy SEALs and Green Berets.

“People always talk about multi-tasking but your brain can’t multi-task,” says Harris, explaining the theoretical underpinning of the military-inspired mental training he’s subjected himself to since the off-season. “It’s actually just task-switching and how efficiently you can switch those channels.

“Physically, everybody can do it, if you’re in this league. So, if playing the position of quarterback is (more than) half mental, why don’t I spend more time training myself mentally?”

“Before the Saskatchewan game, somebody was like ‘you’ve never won a huge game that took you guys into first’ . . . And you win that game and then it’s like ‘well, you haven’t won a playoff game’, and so each thing’s a new hurdle.” 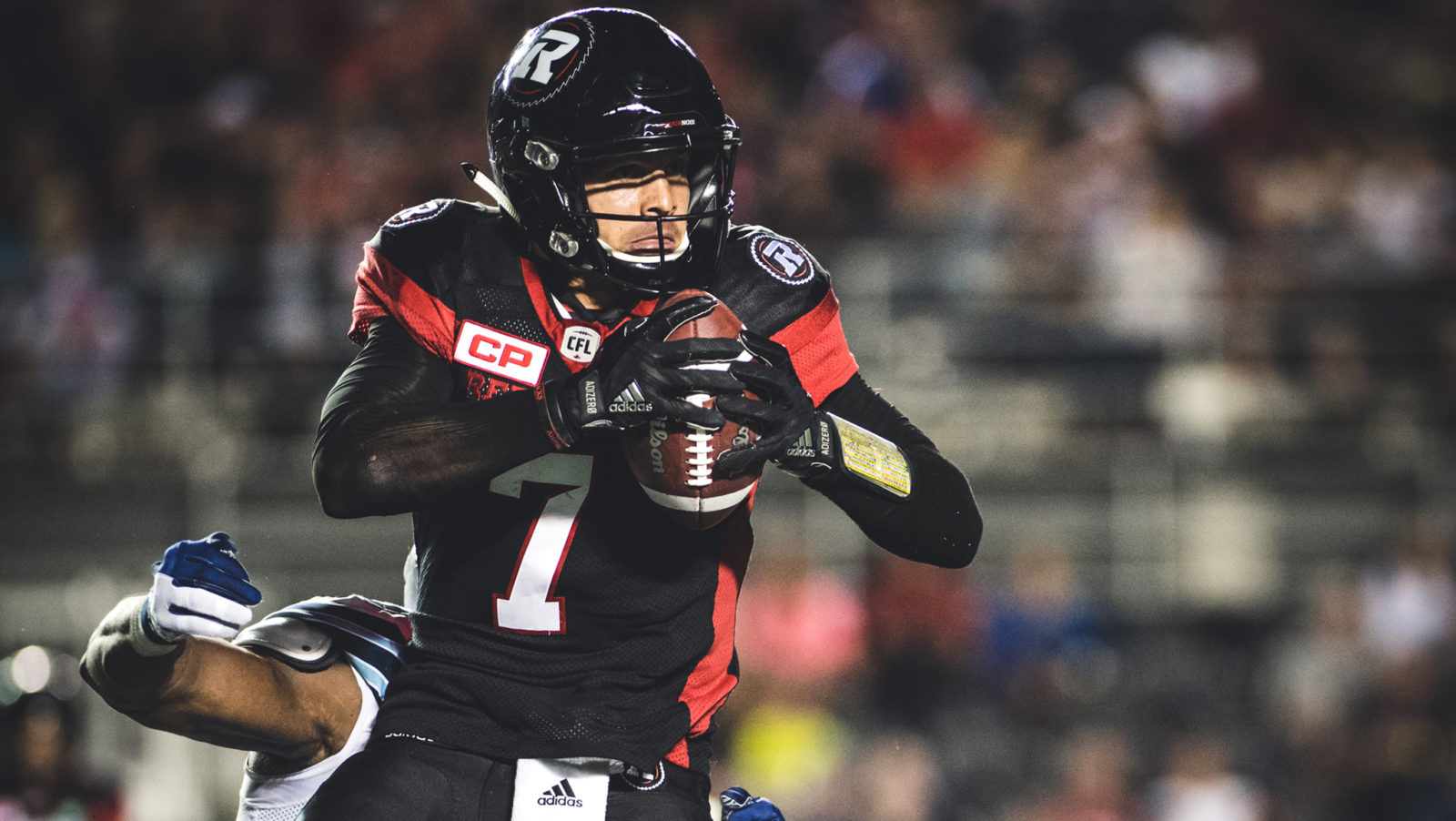 In his second season in Ottawa, Trevor Harris set a new career-high with 4,366 passing yards in a season (Photo: Johany Jutras/CFL.ca)

Harris has already given big hints that he is quite ready for his post-season debut as a starter, with another chance to show it Friday night when the REDBLACKS play host to the Hamilton Tiger-Cats. Ottawa needs a win to keep hopes of finishing first in the East alive, with an opportunity to pull ahead of the idle Toronto Argonauts in what will be the REDBLACKS’ last game of the regular season.

Almost three weeks ago, Harris led the REDBLACKS to a rousing come from behind victory in BC, throwing for 380 yards and three touchdowns as Ottawa erased a 19-point deficit in a 30-25 win. That was big but not nearly as big as what happened a week later in Regina, where Harris engineered two late touchdown drives in a stunning 33-32 victory over the Roughriders.

Still, doubts can linger in the minds of some and that is not unreasonable; even Harris agrees.

In 2015, Harris was enjoying a breakthrough year as a starter with the Toronto Argonauts, in place of an injured Ricky Ray. He stumbled after Labour Day, however, and the Argos benched him in favour of a still not completely healthy Ray down the stretch.

Last season, Harris took over for an injured Henry Burris, in Ottawa, but after a loss against the BC Lions – a game in which Harris nonetheless put up astounding passing numbers – and then a struggle the following week in a loss to Saskatchewan, REDBLACKS coach Rick Campbell opted to go back to a healthy Burris, and we all know the rest of the story. Harris never got another chance.

So here he is, with a sturdy regular season resume over the last three seasons, still anticipating his first opportunity to take control of a meaningful stretch games. Those two comeback victories are a good start.

“It’s funny,” Harris says, “because before the Saskatchewan game, somebody was like ‘you’ve never won a huge game that took you guys into first. Is this the one?’ And you win that game and then it’s like ‘well, you haven’t won a playoff game’, and so each thing’s a new hurdle.

“But that’s what so cool about football. There are always new things to accomplish.” 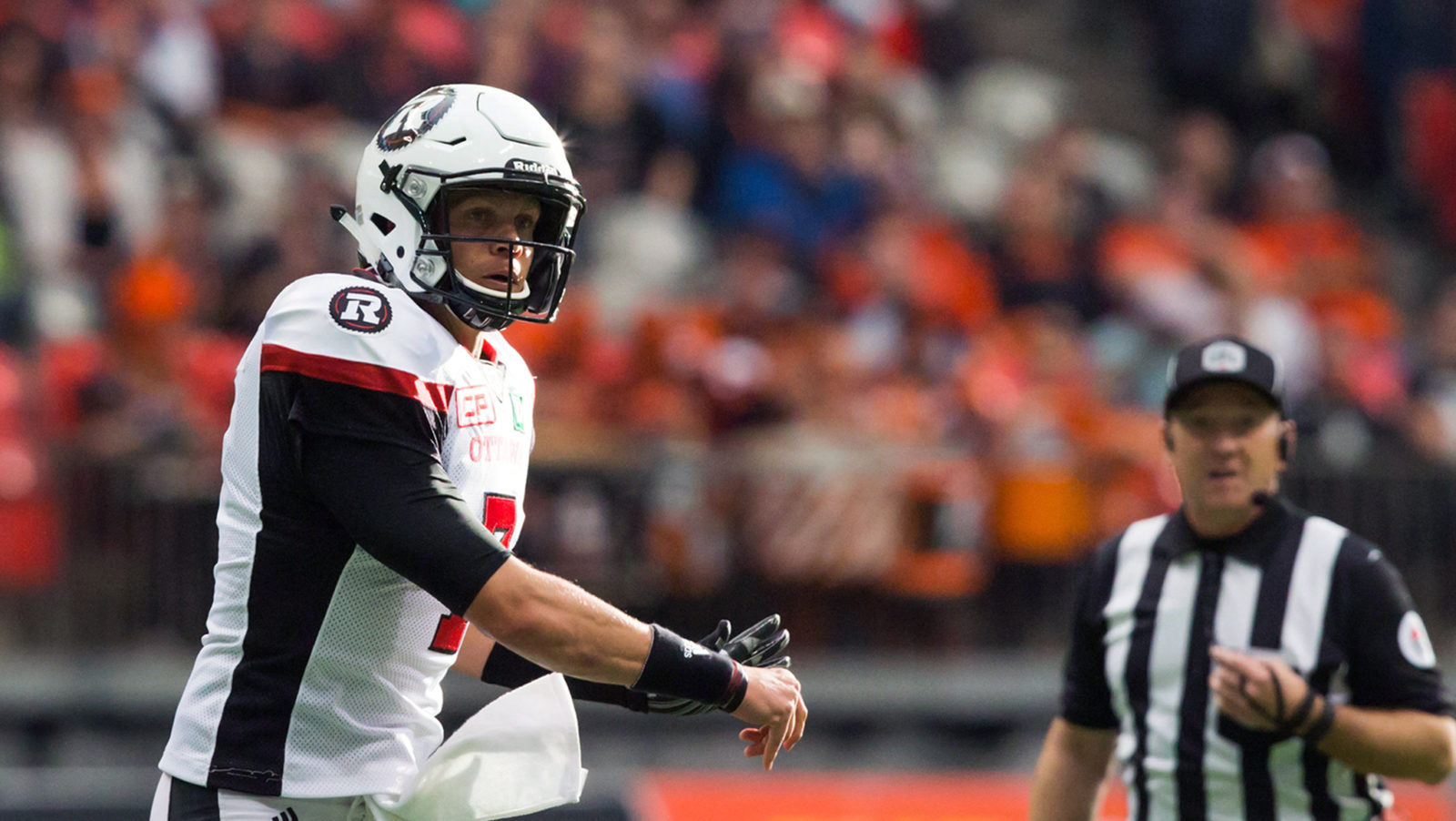 At 31, Trevor Harris is just coming into his prime as a CFL quarterback, compiling a standout 28 touchdowns against only eight interceptions this season (Photo: The Canadian Press)

Harris has always been known as a very hard worker, a player who does not sulk but rather digs down and grinds even harder when things don’t go so well. After his demotion in Toronto, he could still be seen out on the field after practice was over, a solitary figure going through drop backs, practicing his footwork, and visualizing reads.

Wherever he can find an edge, Harris will go. So it is not surprising to hear that during the winter months, knowing Burris was retiring, he began looking for yet another way that he could improve.

He started researching new ways to train his mind, which eventually led him to the routine that is now a daily habit.

Harris found a few odds and ends that resonated with him and told a friend about what he was investigating. When it was suggested to him that it sounded a lot like something known as combat brain training, he was intrigued and got in touch with the man behind the program, John Kennedy.

Kennedy had branched out from working with the minds of military personnel to those with low-function capabilities and injured individuals who were trying to recover from concussions. And athletes.

“We hit it off and I loved the stuff that he’s doing,” says Harris, who jumped in wholeheartedly after an exploratory session with Kennedy. “And I really feel like it’s translated to helping me on the field.”

The two have regular sessions over Skype or FaceTime and Harris practices a daily dose of the training for 10 or 15 minutes, often in the morning before hitting the field for practice.

Kennedy’s exercises, Harris says, have helped him sharpen and speed up his decision-making abilities and that those are things that can, obviously, help a quarterback in the heat of a collapsing pocket.

“As a quarterback, you’re looking at the blitz, you’re looking at the front, the coverage, your route combination, how it affects things. Route conversions. Sliding in the pocket. So you have all these different waves that you’re trying to think of, as a quarterback. If you can make that more efficient in your brain, you can be a better decision-maker on the field, and that’s how it’s translated.”

As well, Harris uses some of the techniques to help calm a busy pre-game inner voice. Whether it’s an hour before kick-off or a few days before a game, a racing mind can be tranquilized or, at least, quieted some.

“I use some of the exercises that he gives me to kinda relax myself, to work on my anticipation. That does a really great job of relaxing me a ton and getting myself in a decision making mode, getting my brain going,” he says.

In-game, Harris will rely on his decision-making abilities, maintaining that he’s always done that anyway. And that is what will shield him from altering his play during big moments, he believes.

“A lot of times during those pressure moments, I feel like a lot of people think that they have to do something different and they have to play different. I just do exactly what I’m coached to do. For that reason, in some ways, I’ve always felt that I have an advantage in those times.”

An advantage that he thinks can be even more pronounced now that he has taken the steps that he feels have led to his brain function being trained up. 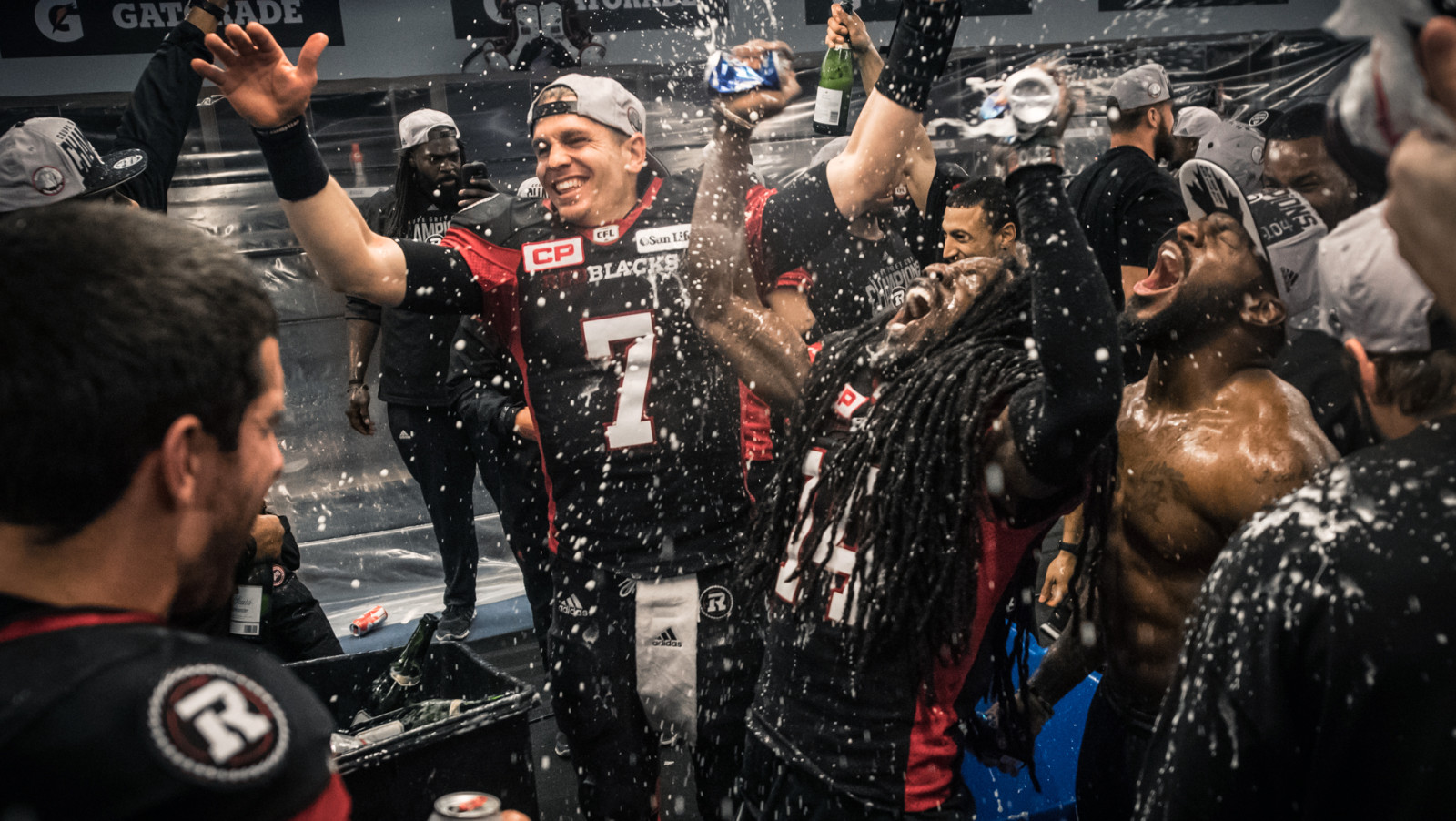 Last year, Trevor Harris was allowed to sit and learn from one of the best in Henry Burris, even winning his first Grey Cup in the process (Photo: Johany Jutras/CFL.ca)

If that mental training, the lessons learned from backing up masters like Ray and Burris, his own natural fortitude and his physical abilities all positively combine in the crucible of playoff football, Harris will reach another level, one that he has hungered for, one he’d hoped to have already attained.

“That’s where you make your name and that’s why you play,” he says, eagerly anticipating a taste of post-season action.

“That’s where you get to make your mark and you really get to step up and all the chips are in the middle of the table.”

As for those who aren’t yet sure that he is capable of gathering in the chips, Harris understands, and he won’t use the feelings of skeptics as fuel, saying he doesn’t need to.

“The people who say you can’t do this or you can’t do that, it doesn’t motivate me more,” he says, insisting that the only incentive he needs comes from within the brain he continues to train. “I’ve always been a highly driven guy my whole life.”

“It is fun to have those opportunities to, I guess, perform in those moments where people say ‘let’s see if he can do it’. They’re new opportunities and obstacles that you can clear.”

Harris isn’t insulted by your skepticism, nor is he powered by it. He thinks it’s fair to take a wait and see attitude before passing judgement on his abilities to scale the heights in big games.

For you, that is.

For Trevor Harris, however, there is never any waiting to see. Only time during which he can find something else to work on in order to give him an edge.