TORONTO — The Toronto Argonauts have acquired the rights to pending free agent quarterback James Franklin, the team announced Monday, after completing a deal with the Edmonton Eskimos.  The club also got Edmonton’s best third round pick in the 2018 CFL Draft.

Franklin is scheduled to become a free agent on February 13 but by making the deal, the general manager Jim Popp and the Argos brass retain exclusive negotiating rights with Franklin until that point.

“This is all new. This just happened. We talked to him today, he seemed excited,” Argonauts GM told CFL.ca Monday. “He has a new agent and these things don’t just materialize in 24 hours. We’ll start working on it and see where we’re going with it. But I think he’s excited that it’s Toronto and the prospects of what could be moving forward.”

Eskimos general manager Brock Sunderland told members of the media on Monday that he had asked Franklin numerous times if he wanted to return to Edmonton and the quarterback said no, prompting him to look at trade options. 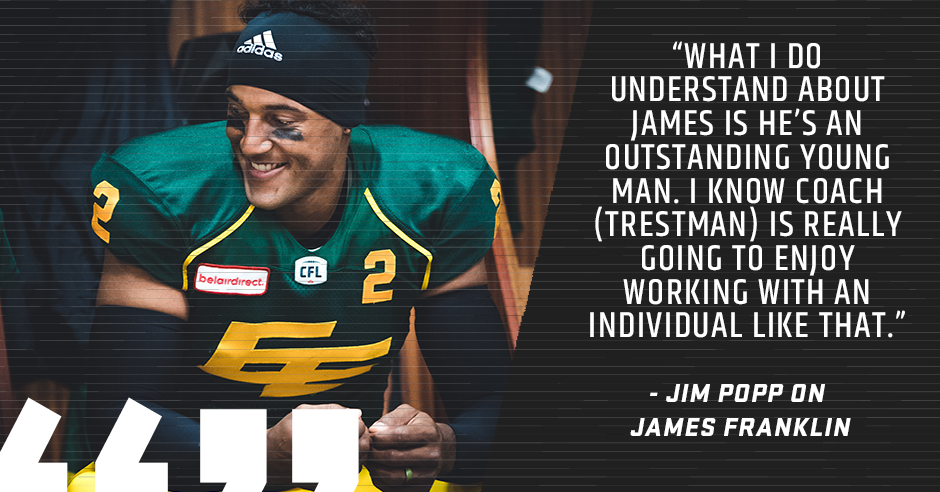 “I asked him multiple times point blank, ‘If I even offered you a contract or is it worth me even offering?’” Sunderland said. “And he said no and was very respectful in how he did it but he was honest. It was either get something in return for him or he was going to walk and we’d get nothing.”

The Argos made Woods, a 6-foot-9 offensive lineman out of Idaho, their top draft pick in the 2017 CFL Draft last May. The 23-year-old hasn’t yet played a CFL game.

“He’s very versatile and that was very appealing about him and something that we thought a lot of value of,” Sunderland said. “He can play guard and tackle and he did it on both the right and left sides. What it does for us is it potentially allows us to flip our ratio and go four Canadian offensive linemen which allows us to play another international whether it be linebacker, DB, maybe all wide receivers.”

For Toronto, a prospect and a draft pick may seem like a high price to pay without a guaranteed contract in place. But the payout could be significant, especially considering the uncertainty surrounding 2017 East Division MOP Ricky Ray.