Not Done Yet: Ricky Ray pens new deal to return to Toronto

Not Done Yet: Ricky Ray pens new deal to return to Toronto

TORONTO — One one of the biggest mysteries of the CFL off-season has finally been put to rest as Ricky Ray has inked a new one-year deal with the Toronto Argonauts.

Ray took a little over two months to reflect on whether or not he would return after a stellar 2017 campaign, in which he passed for more than 5,500 yards, earned an East Division Most Outstanding Player nod and capped the entire all-star season off with a Grey Cup Championship in Ottawa.

“Ricky Ray will go down as one of the greatest quarterbacks to ever play in the CFL, but we are thrilled he’s not done adding to his historic career just yet,” Argos General Manager Jim Popp said in a statement. “We are very excited to welcome him back for another season in the Double Blue.”

The case for Ray to retire was a strong one. He had an opportunity to do exactly what Henry Burris did one season ago: walk after winning a championship. Until Ray’s iconic win in the snow against the heavily-favoured Stamps last year, no quarterback had ever started and won four Grey Cups. Not Anthony Calvillo, not Doug Flutie, not even Warren Moon. 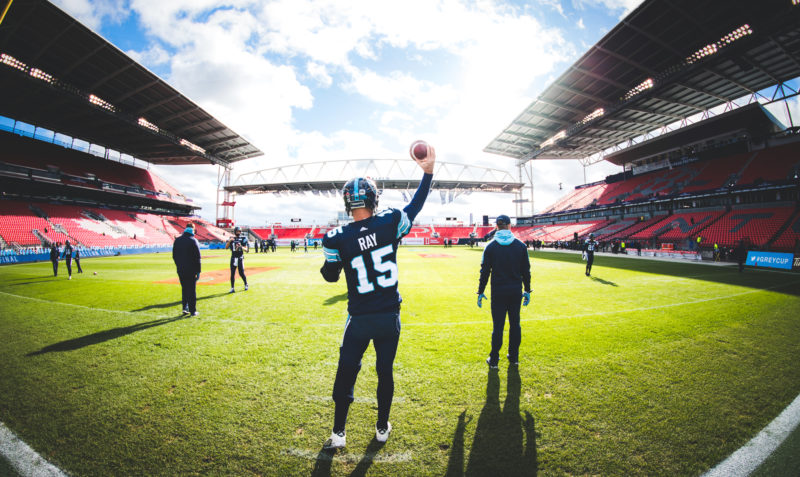 However, Ray thrived in his 15th CFL season, passing for the second-highest total of his career under the revamped Marc Trestman-led offence.  At the height of the Argos’ Grey Cup celebration, Ray also hinted that he may not be quite ready to hang them up saying, “Why not two?” to a gathering of fans that chanted ‘one more year!’.

His return sets the Argos up in arguably one of the more envious spots in the league with a one-two punch of he and newly acquired James Franklin as his understudy.

In an interview with CFL.ca senior writer Chris O’Leary last month, Franklin made it very clear that he would not be deterred by Ray returning even though his ultimate goal is to be the starter in Toronto.

“I know that Ricky’s earned this,” Franklin said in January. “I know he has a good resume and he’s earned where he’s at and if he comes back, he’s earned the right to be the starter. I know that. I’m still being patient and I feel like this is a great opportunity.