A Natural Fit: Rookie linebacker stars at SAM for REDBLACKS 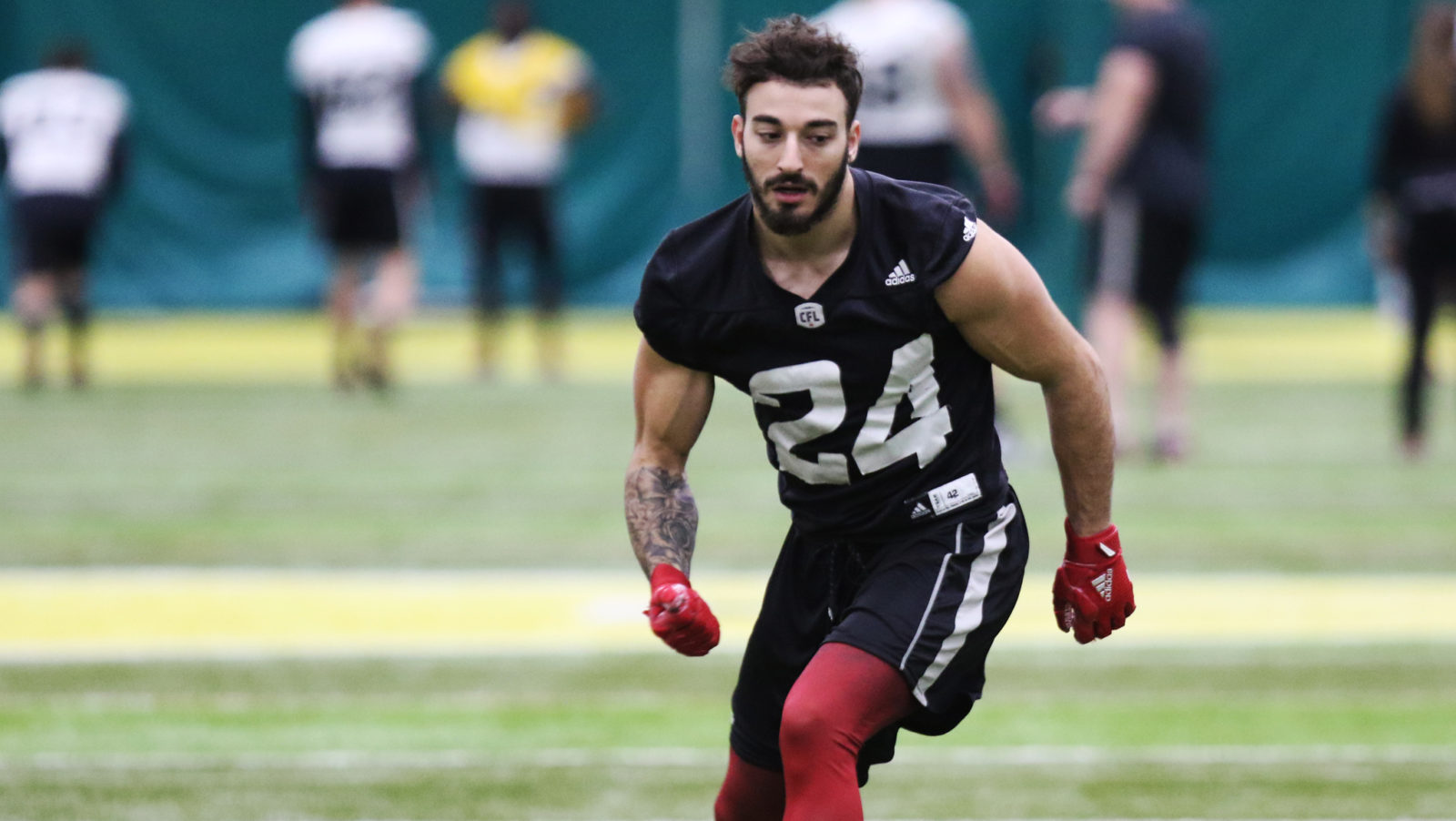 A Natural Fit: Rookie linebacker stars at SAM for REDBLACKS

Noel Thorpe wasn’t at all surprised that Anthony Cioffi made a big play, early in last Sunday’s Eastern Final. He’d seen it before, pretty well right away.

Cioffi, the rookie linebacker out of Rutgers University, snagged an interception during the second quarter of Ottawa’s playoff win over Hamilton, picking off a Jeremiah Masoli overthrow at the Ticats’ 35-yard line, returning it to the 22-yard line.

The score was just 6-3 at the time and one play after Cioffi’s pick, the REDBLACKS scored a major and a two-point convert to take a 14-3 lead.

“Avery Williams had a nice QB pressure, basically just exactly what we’d been game planning, forced an overthrow,” said Cioffi, the 24-year-old native of Springfield, New Jersey. “I like to say tips and overthrows, you know, you gotta get them. Those are ones that are gimmes.”

“I was excited. I wanted to score so bad, but I hadn’t had the ball in my hands in a while. But it was fun.”

As the REDBLACKS and Calgary Stampeders get set to meet in the 106th Grey Cup presented by Shaw, an excited Cioffi is hoping for more big plays ahead while getting prepared for a tough challenge; doing his part in neutralizing the Stamps receivers from his position at strong side linebacker (SAM).

They really do have a lot of great receivers, a lot of great threats,” said Cioffi. “But we’ve gotta continue to play our game, understand what Coach Thorpe’s game plan is, execute it as efficient as possible and we’ll be alright.”

The kid has been more than alright for the REDBLACKS in 2018, and if not for the magical season of first-year kicker Lewis Ward, Cioffi might well have been the team’s rookie of the year. He’s been as steady as a vet at the difficult SAM position (with the occasional shift to safety to take up some injury slack), making 50 defensive plays, including 36 tackles, two sacks, two forced fumbles and one recovery. As well, Cioffi contributed on special teams, with eight tackles.

“I feel like coming in, the opportunity that was presented to me, I felt like I seized the moment,” said Cioffi, who actually started in camp as a weak side linebacker before being shifted over. “And I’m just very thankful for the REDBLACKS giving me that opportunity.”

“I enjoy playing for Coach Thorpe. The defence that he has, it plays to my strong suits.”

For four seasons at Rutgers, Cioffi played a number of positions, most notably free safety, strong safety and corner. That kind of variety has given him a good base from which to grow, and the safety experience, in particular, has helped with his adjustment to SAM.

“I’m kind of well-versed and versatile but I’m really excited to play the SAM,” said Cioffi. “I really enjoy it. I understand it very well and it’s great to play there. I feel like SAM’s my home.”

Thorpe seems to feel that way, too, with a nod to Cioffi’s pass defence abilities.

“You gotta have a guy who has good man coverage skills,” he said of the decision to slot Cioffi in at strong side. “He’s a guy that exemplifies what we’re looking for from that position.”

That would include speed, something Cioffi has plenty of. A state champion in the hundred metre sprint while in high school, he showcased more of it while at Rutgers and then again at REDBLACKS’ mini-camp.

But it was more than just that.

“He brought the ability to blitz, he recognized formations quickly,” said Thorpe. He lists his young linebacker’s positives, and you can see why it was that he put faith in Cioffi playing such a demanding position.

“Great skill set, physicality, ability to tackle. Ability to cover, ability to blitz. Good speed, good footwork,” said Thorpe, who then noted the mental abilities that also impressed, particularly when it came to having to adjust to the waggle, something that can bedevil an American player when he first joins the CFL.

“That didn’t intimidate him at all,” said Thorpe.

“That’s what you’re gonna get out of this guy,” continued Thorpe. “I saw it right away with him. There’s some instinctual things that you look for in football players. He’s got those instincts.”

Some rookies might be over the moon about their season if they’d had one like Cioffi’s, but while he takes some satisfaction in what he’s accomplished, he knows the work has really just begun.

“I feel like I’ve been doing a pretty good job but I need to continue elevating my game,” he said.

He’ll do that, too, because of the way he was raised, figures Thorpe.

“Comes from a hard-working Italian family in New Jersey,” the coach said, before adding a little anecdote, from last spring, to drive the point home.

“The first person I meet is his uncle, who’s driven up all the way to just watch him in mini-camp,” said Thorpe. “So, he’s got that hard-working mentality. He’s gonna do everything he needs to do to get himself prepared. And he’s gonna leave it all on the field.”

As the Grey Cup approaches, Cioffi isn’t intimidated. He’s already had a big game to contend with less than a week ago, although this one is exponentially larger, no doubt.

“For me, it’s a bigger game, it’s a bigger stage,” he said, before displaying some veteran poise, perhaps guided by the likes of Rico Murray, Kyries Hebert and Antoine Pruneau, three teammates that he cited as personal guides.

“But you can’t make it bigger than what it is,” he said.