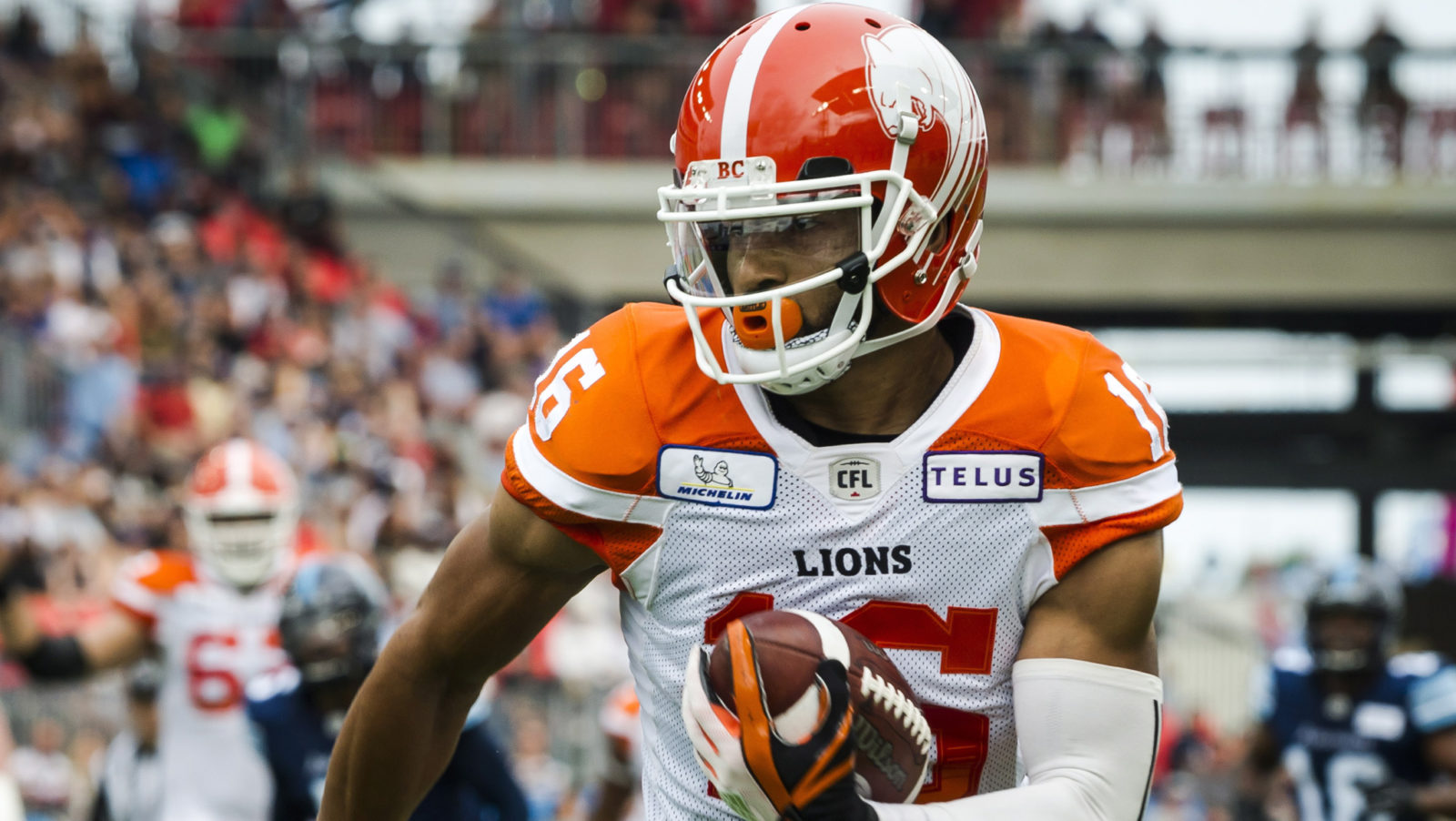 The Canadian Football League revealed the full list of pending free agents on Friday, with free agency officially getting under way on Feb. 12, 2019.

Take a look at Nye’s roster, including the necessary seven Canadian starters: 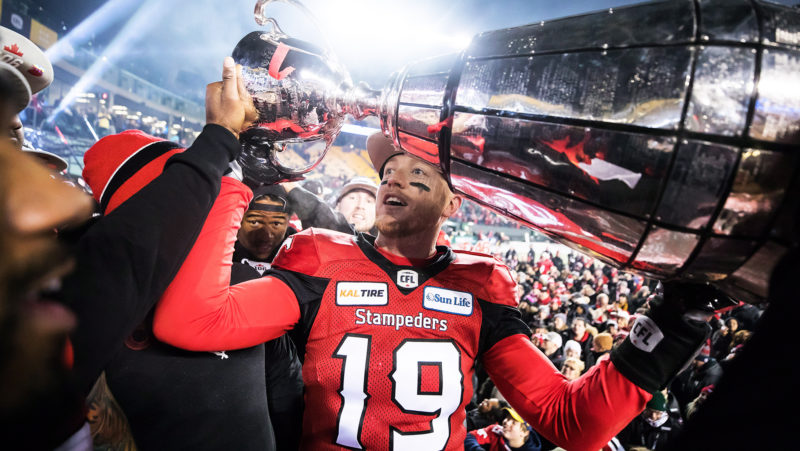 The two-time Grey Cup Champion quarterback, who also has two Most Outstanding Player awards, gets in just ahead of Mike Reilly for the starting spot on the free agent list for me. Wins and age are the categories that you can’t ignore.

Mitchell did amazing things with a banged up receiving corps. We all know the NFL is an option but if there is any way he shakes to free agency, I can’t imagine what kind of bidding war it would be for defending champion QB.

He just missed the rushing title as Andrew Harris eclipsed him, thanks in part to Winnipeg allowing Harris to get the yards necessary while Powell sat for the last part of the season. A running back that can do all three qualities a CFL running back needs to do would be an upgrade at the position for many teams.

There is no lack of talent as many quality receivers had to be left off this list, and there will be a debate on Derel Walker or DaVaris Daniels. Brandon Banks brings the speed to any team that makes defensive backs’ heads spin. He makes a one-yard hitch into a 60-yard touchdown based on that speed.

Bryan Burnham has now three-straight 1,000-yard seasons and with that consistency, he’s a prized possession for any offensive coordinator or quarterback. The young Duke Williams is a monster target, who turned into Mike Reilly’s favourite target for good reason this year. The big, quick receiver can go up and get anything.

Greg Ellingson, like Burnham, has been incredibly consistent throughout his CFL career. The veteran presence of Ellingson and his perfect route running makes life easy for quarterbacks to know where he is on every play. Mike Jones took the extra chances with Hamilton after Banks’ injury and the national proved he is a playmaker who could easily find himself in the 1,000-yard territory later in his career.

Two-time CFL Most Outstanding Offensive Lineman Stanley Bryant has been keeping quarterbacks clean since he broke into the league with the Calgary Stampeders. There is nothing on the offensive line more prized than a veteran left tackle who can lock it down. Joel Figueroa helped improve the BC Lions’ offensive line and showed how major an offensive tackle signing can be for a team. He’ll have to play the right side, which he’s done, to make this team though.

Bergman has been underrated his entire career and can play multiple positions on the offensive line. The versatility he brings, as well as his ability, would improve anyone’s interior O-line in the CFL. Former second overall pick Sukh Chungh can overpower defensive tackles in the league. Chungh is still developing. He’ll be 27 next season and just starting the prime of his career for an offensive lineman.

The 26-year-old centre has helped the Bombers open up holes for Andrew Harris for him to take the rushing title. There are plenty of teams who would love to have a young quality centre to build an O-line around … if the Bombers actually can’t sign him, of course. 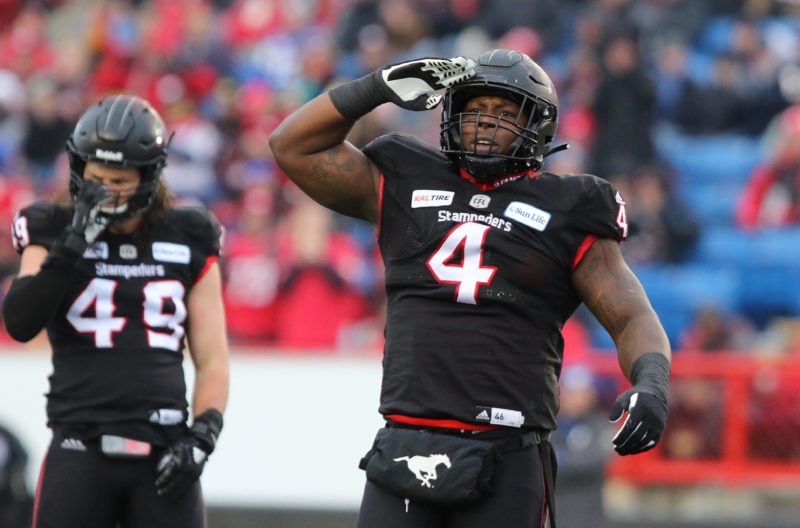 Micah Johnson was a force on the Stampeders defensive line in 2018 (Dave Chidley/CFL.ca)

Do I have to say anything about Micah Johnson to prove he belongs here? An absolute monster and big problem for offensive linemen. After Ted Laurent, Zack Evans has developed into one of the top national defensive tackles. Evans has proven his ability to rush the passer from inside as well as stop the run. It’s a reason the Riders invested in him last year to bolster their defensive line and improve their national talent.

Willie Jefferson is a game changing defensive end,who commands attention. What this does is open up others around him to make plays. ‘The Freak’ is what they call him in Saskatchewan and for good reason. He does things not many other defensive ends can do.

Shawn Lemon sacks the quarterback better than most in the CFL and has for years. Coming off the edge he bolstered the Lions’ defensive line. He’s also knocking off plenty of teams on his way around the league and with the West covered, maybe another trip out East is in order.

The top national linebacker in the game, Alex Singleton is a ratio-breaker. All GMs wish they could put someone in the middle of their defence like Singleton, with the national designation. Where his future is, north or south, we’ll see, but he’s a must have on this squad.

Adam Bighill changed the game in Winnipeg. He was the team’s MOP candidate for good reason, as his arrival was the key for the Bombers defence to be as formidable as they became this season.

Don Unamba may be the most underrated player on this team, though his stock is rising as the coverage linebacker in Hamilton. He has become a player who is around the ball and if you’re looking at SAM linebacker as a position of need, Unamba is at the top of the list, although Otha Foster is a 1B candidate here. 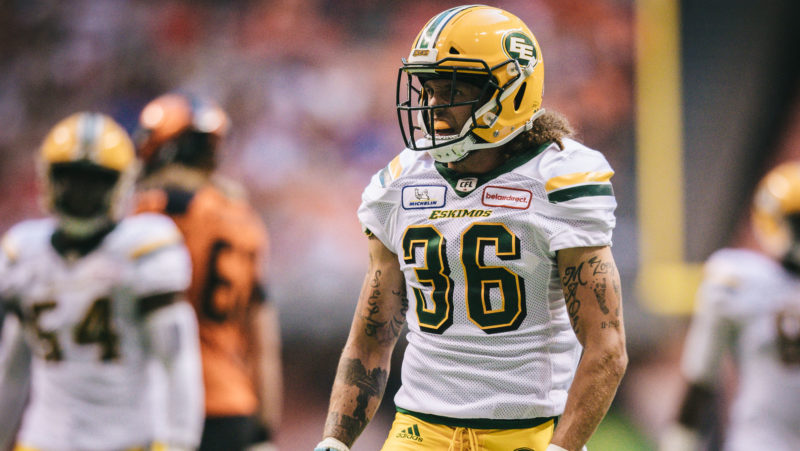 Aaron Grymes hit a career-high in tackles in 2018 with 58 (Johany Jutras/CFL.ca)

I was even able to break it into two corners and two halfbacks for the defensive backs here. Breaux is a shutdown corner, who doesn’t make a lot of plays because teams aren’t throwing anywhere near him. Evans is another solid corner, who made his presence felt in the Grey Cup with an interception but is a perennial All-Star calibre corner.

TJ Heath and Aaron Grymes have the respect of their opponents, although there are plenty of halfbacks around the league that are worthy of praise that are also pending free agents, which means a GM with a need at defensive back shouldn’t be light on options.

After an incredible rookie season, we haven’t seen the same production until this season. Edem was everywhere for Chris Jones in the Riders defence. And I don’t mean where the ball was. Jones used Edem in multiple spots and he responded well. Chris Ackie is another option and another 1A, 1B debate could be had, but I also put Ackie’s ability to make all the plays he did because his defence in Montreal was on the field so much.

He does it all and has been great at doing all three for some time. Although, there aren’t a lot of teams looking for a kicker, there are a few who may want to see if they can get an upgrade if the Bombers pass on the lefty.

Diontae Spencer was on the list for receiver, so to make room, I put him here to add another dynamic receiver to the roster, who can also change the game on returns.