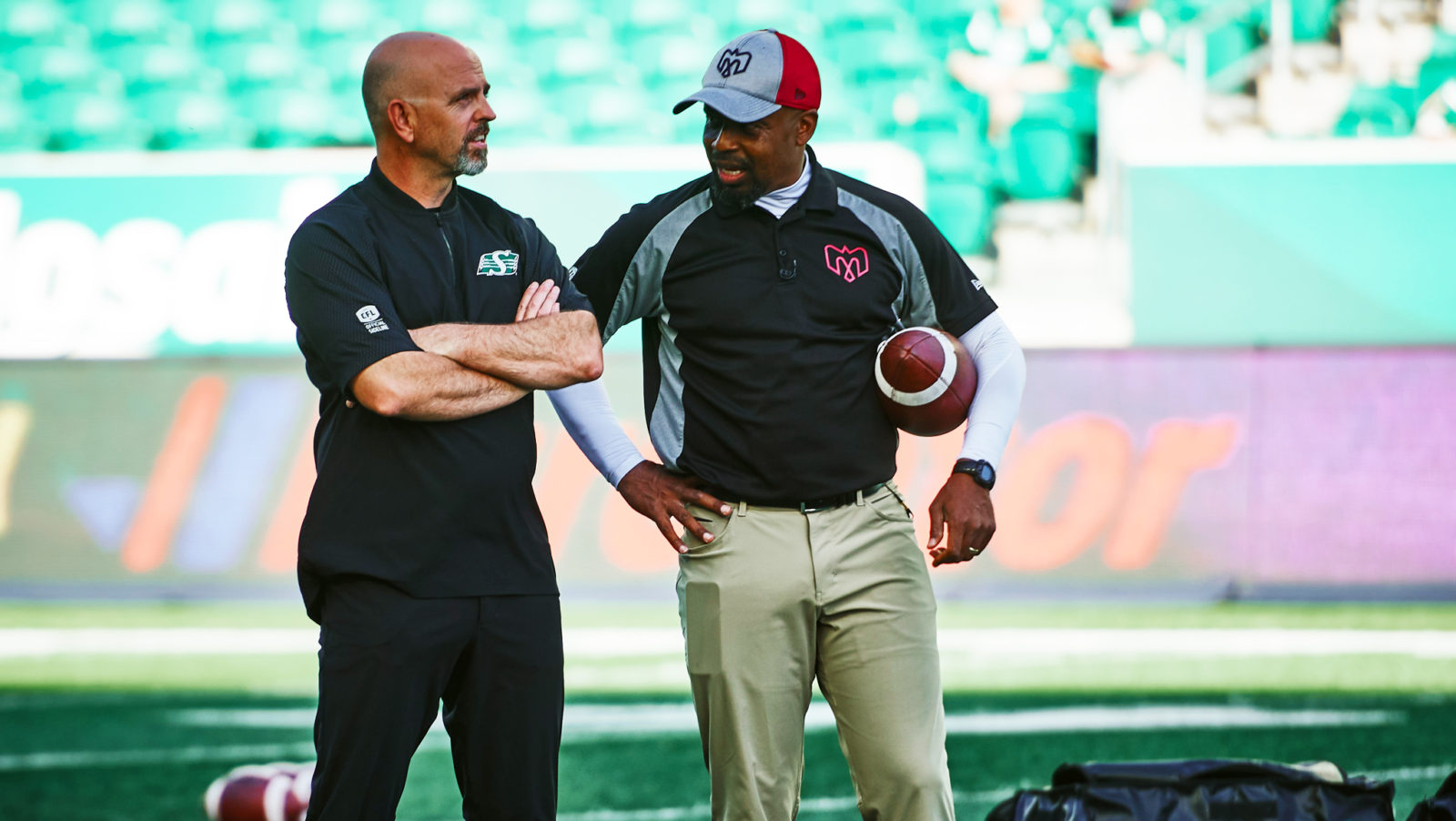 As we prep to flip the calendar to October, football season starts to feel more serious.

Most teams are making their playoff pushes and some are fighting for their playoff lives. The weather will start to level off this month and the run game will become increasingly important. With that, the conversation about award winners will start to take shape.

We’ve started to look at MOP candidates, but to piggyback an argument that’s started to pick up steam on Twitter of late, let’s have a conversation about the Coach of the Year award.

In a league with a 100-plus year history, I tend to assume that just about all of the crazy/unexpected/unpredictable has happened. But it’s rare, to say the least, that the top-three candidates for coach of the year are all first-time head coaches. And how often are two of the candidates hired after Jan. 1? 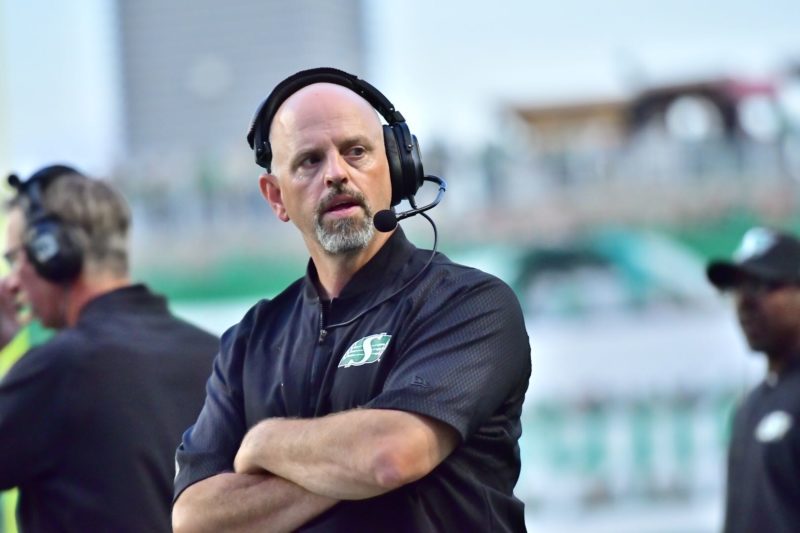 Let’s start in Saskatchewan, where Dickenson made the move to head coach after 16 years on CFL sidelines, the majority of them as a special teams coordinator — a title he held on to when he was hired as head coach. The Riders went through their share of early challenges this year, abruptly losing Chris Jones to the NFL, then losing Zach Collaros just minutes into their season opener.

Dickenson will credit offensive coordinator Steve McAdoo and QBs coach Steve Walsh for the job they’ve done with Cody Fajardo, but as eight of the league’s nine head coaches have learned this year, adjusting to giving extended/permanent reps to your backup is no easy task. The Riders sit at 9-4, matching the first-place Calgary Stampeders’ record, where of course, Craig’s brother Dave runs the show. Calgary has the edge in the standings thanks to their Week 4 win in Regina and they’ll see each other again on Oct 11 in Calgary. Speaking of firsts, how much fun would a brother vs. brother playoff match be?

In the East, Orlondo Steinauer has made a great case for the coach of the year award. The Ticats are a league-best 11-3 and are back home after a tough three-game West trip that saw them beat Edmonton and Winnipeg. Their only loss on that West tour came from a miraculous Tre Roberson blocked field goal in Calgary.

Add in the injuries that the Ticats have had to deal with and Steinauer’s resume this year becomes more impressive. They lost Jeremiah Masoli in Week 7 to a torn ACL. Dane Evans has gone 6-2 in his place.

Losing their starting quarterback and the reigning East MOP wasn’t their only problem. The Ticats have rolled through five running backs this year, after losing Canadian Sean Thomas Erlington and Cam Marshall to the six-game injured list. Veteran receiver Luke Tasker has missed chunks of the season as well. Cornerback Delvin Breaux and d-linemen Adrian Tracy and Jamaal Westerman have also landed on the six-game list.

Still, the Ticats have rolled through their schedule this season. With four games left — they have Edmonton, Ottawa, Montreal and Toronto in front of them — the Ticats are just two wins away from posting their best regular-season record ever. Steinauer will tell you that the Grey Cup is the only goal that matters, but the season his team has had should earn him some serious consideration from voters in November. 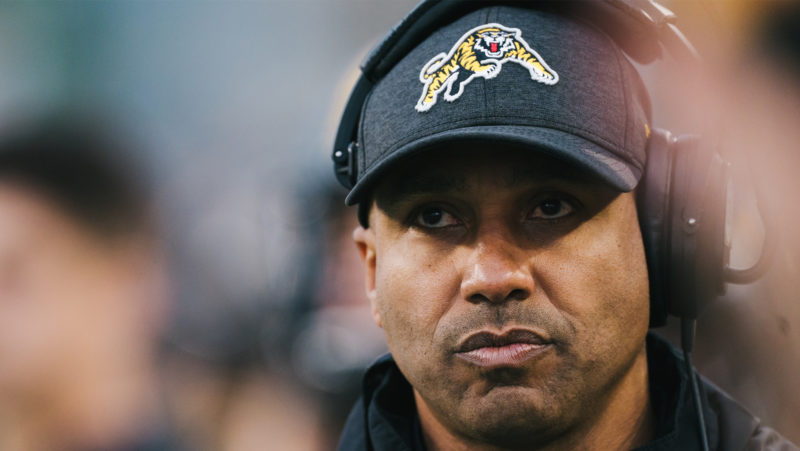 Finally, we have Jones in Montreal. His team’s 7-6 record isn’t as impressive as the Ticats or Riders, but you have to consider the change that Jones has brought to a longtime beleaguered Alouettes team.

Jones took the head coaching job six days before the Als played their season-opener in Edmonton. The team has missed the playoffs the last four years, winning a combined 21 games in that span. Add in the organization falling under temporary league ownership, then having GM Kavis Reed fired in July and the pieces were in place for another forgettable season.

Jones took a team that had grown accustomed to losing and seemingly instilled an irrepressible spirit from the get-go. The Als have had two incredible comeback victories this season, stealing a double-OT win in Calgary and erasing a 24-point deficit against Winnipeg two weeks ago. They upended Toronto in the Touchdown Atlantic game and almost pulled out a late comeback against the BC Lions in Vancouver this past weekend; a place that’s been historically cruel to them.

That game might serve as a point to knock Jones’ case at the award this year. He’s been an adventurous play-caller this season, successfully running trick plays in wins over Edmonton and Toronto. His choice to go for it from BC’s two-yard line with 1:10 left to play down 25-23 caught its share of criticism when all his team needed was a chip shot field goal to go in front.

Herb Zurkowsky made an excellent point on the play call in the Montreal Gazette: the failure here is on execution more than on the call itself. Antonio Pipkin fumbled the ball outside of the end zone. If the team settled for the short field goal to go up one, they would have put the ball in Mike Reilly’s hands with a minute on the clock. Regardless of how poorly the Lions have played this year, Reilly has a history of success on late-game drives. Odds are he could at least get his team within field goal range to close out the game.

The Ticats have four games left, while the Als and Riders have five each. Dickenson, Steinauer, and Jones have made strong cases for the COY argument, but these final games will likely be the ones that make the difference in the minds of voters. Fans can ensure the argument will carry on from week-to-week for the rest of the season.