Cauz: Als go a little off script in win over Stamps 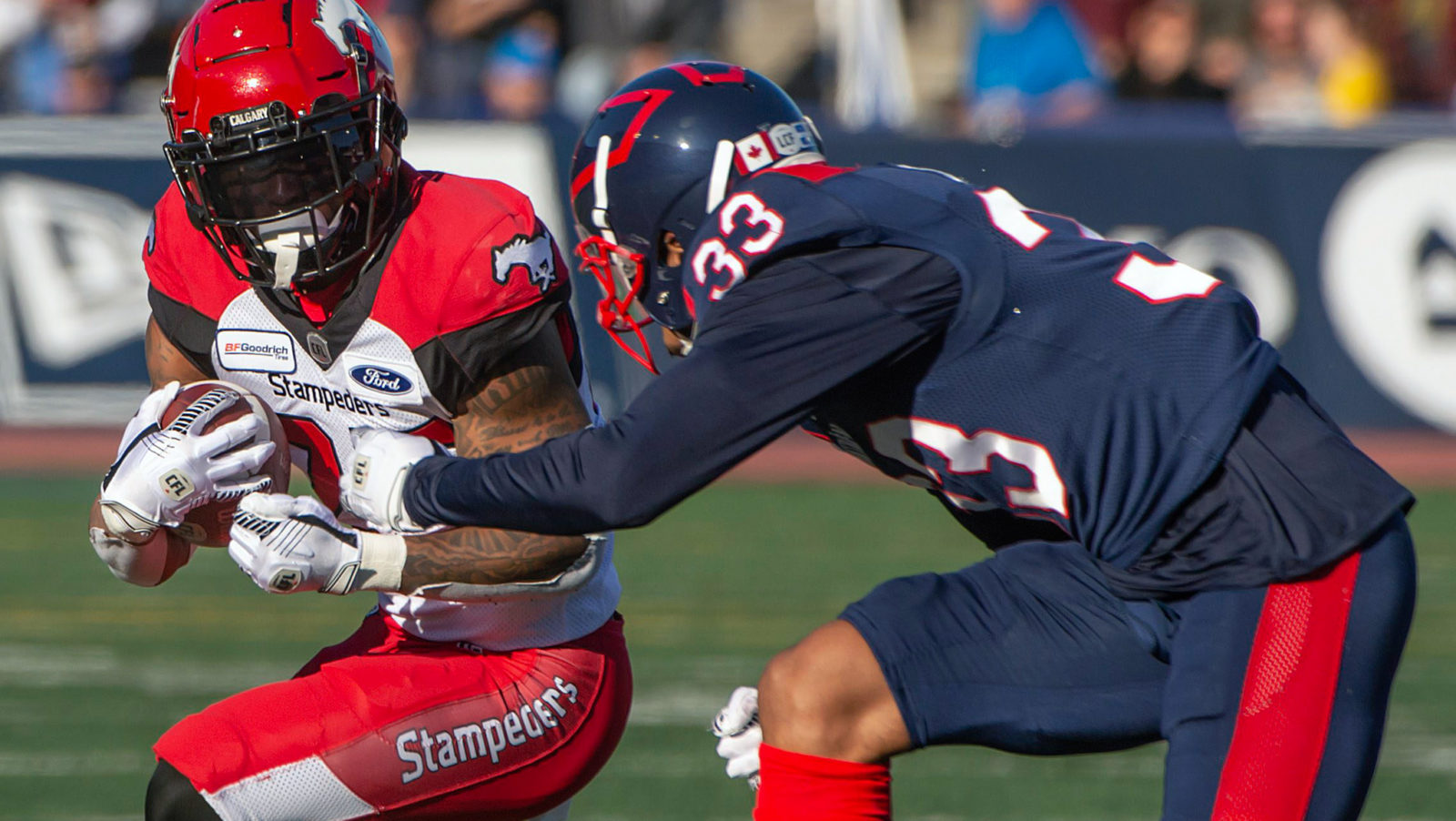 Cauz: Als go a little off script in win over Stamps

Do you enjoy a good football riddle? If the answer is yes then you’re in luck, I have one for you! How do the Calgary Stampeders put up 560 yards of offence, average 5.3 yards per rush and 10.5 yards per pass, and only score 17 points?

They opened the game with a methodical 13-play drive for 81 yards and a Don Jackson touchdown run courtesy of the right side of the Calgary offensive line. With just under six minutes left in the second quarter, Bo Levi Mitchell hit Josh Huff for a 28-yard score, giving the Stampeders a 17-7 lead. At that point in the game, Bo had been constantly pushing the ball downfield, hitting receivers four times where the ball traveled at least 25 yards through the air. They would not score again. I’m not talking about for the remainder of the half; I’m saying for the entire game.

Dave Dickenson’s team would have 10 more possessions (not including the final one with six seconds remaining) and they couldn’t even generate a measly single point. And it wasn’t as if Mitchell was injured. Yes, he may not be 100 per cent healthy, but there he was, completing over 72 per cent of his passes for 464 yards, and the entire offence ended up with goose eggs. I needed answers so I went back to check the tape and here is what I found.

1. Calgary missed on some early opportunities.

In five minutes of game action spanning the end of the first quarter and the start of the second, Bo Levi Mitchell hit on two beautiful deep balls. The first saw Hergy Mayala in one swift motion go up and snare a 25-yard pass then race for 43 more before finally being tackled at the four. Then, on the next possession, Josh Huff got behind the Alouette secondary and despite the rush, Mitchell spotted him for 43 yards, giving Calgary a fresh set of downs on the Montreal 36. So what did those two passes net scoring wise for Calgary? Three points. The first drive ended in a short field goal, partially due to an offside call and an inaccurate pass by Mitchell into the end zone, while the other drive saw Rene Parades miss a 40 yarder, normally a gimme for the Calgary kicker. That’s 111 gorgeous downfield passing yards going to waste. Did I mention that Calgary is seventh in the league in red zone touchdown percentage?

2. Don’t attribute all those lost fumbles to “luck”.

If I had to write this article in one sentence it would be “Calgary lost this game primarily because of three lost fumbles by their receivers.” All these fumbles killed any sort of offensive momentum as each one came on drives that saw Calgary generate at least one first down. I know we often ascribe luck to the recovery of fumbles, and yes, it does play a part. You try to predict where a football will end up after being jarred free from a receiver and let loose into that sea of humanity of players desperately trying to recover the ball. But in this case, all three fumble recoveries were the result of well timed and well placed hits by the Alouettes.

Patrick Levels stripped Eric Rogers of the ball to end the first half; Boseko Lokombo put a perfectly placed hit on Josh Huff after a 21-yard gain in the third quarter; and the hat trick of forced fumbles was Lokombo again with the textbook strip, this time on Reggie Begelton. I know it’s easy to scream that the receiver in each example should have practised proper ball security, but there is an art to separating the ball from the receiver, and in this case the Montreal defence painted a masterpiece. Oh, if you’re counting at home, Calgary had amassed 156 total yards on those three respective drives that all ended with a Montreal fumble recovery. It’s starting to become clear how Bo Levi Mitchell and his offence could throw up 560 yards on Montreal yet walk away with less than 20 points.

Let’s stick with the theme of yards lost, but this time in the form of penalties. Twice Terry Williams’ returns were called back due to holding. In the second quarter, Calgary could have started at their 46-yard-line but the penalty pushed them back to their 25, and the in the third quarter the same penalty set Calgary all the way back to their own 40 after Williams’ nifty return had landed them on Montreal’s 25-yard-line. Finally, a Charlie Power horse collar tackle on Mario Alford gifted Montreal 15 extra yards. So three special teams penalties swung the field position battle 81 yards in the Alouettes’ favour.

It’s hard to beat a Bo Levi Mitchell led team without moments of athletic genius, and this game had three. Defensive tackle Ryan Brown absolutely sniffed out a developing screen pass to Reggie Begelton. There is something just so damn entertaining about watching an interior linemen jumping up and picking off the quarterback. Oh sure, his vertical wasn’t that impressive, but his football IQ definitely was. Mario Alford helped make up for a stagnant Montreal offence with his shot-from-a-cannon 85-yard punt return in the third quarter, and finally there is veteran John Bowman. Montreal was clinging to a 18-17 lead with just over four minutes left when on second-and-four he faked an outside rush then went hard inside on the right tackle. This little piece of pass rush trickery created just enough space to beat his man and take down Mitchell. The Alouettes would tack on their final points, a Boris Bede field goal on the next drive.

This was such a weird game for the Montreal defence. They were getting burned deep or pushed around at the line of scrimmage in the first half then shut out Calgary for the final 35 minutes. As I mentioned before, these turnovers were more about the good work collectively being done by Montreal rather than Calgary just making sloppy mistakes. One quick final thought, it was so nice to see the crazy atmosphere late in the game at Percival Molson Memorial Stadium. The Alouettes have suffered from some down years and it certainly has affected the collective energy for their home games. That was not the case late with the fans being so loud that with 1:16 left the TSN cameras showed Coach Khari Jones so caught up by the fans that he was almost dancing on the sidelines just feeling the energy. It was a great moment from a strange afternoon.