Will Arndt remembers working out at a gym in his hometown of Sandy Hook, Conn. in May, 2016. Just a 22-year-old graduate of Western Connecticut State University then, the quarterback’s focus was solely on extending his football career.

During one of those workouts, he remembers a TV in the gym catching his eye. Something about a wildfire. The breadth of it made him stop and look. He didn’t know it at the time, but he was over 4,000 km away from it.

“Things that happen far away, you never really think twice about it,” Arndt said on Thursday.

He had no idea at that point that his football dream and that stop-and-stare news story would intersect. Without that intersection, the now 26-year-old may not be where he is today, getting the start on Friday for the Ottawa REDBLACKS when they face the Toronto Argonauts.

About a month after he saw that news clip, Fort McMurray, Alta. was literally still smouldering from its wildfire. Approximately 88,000 people had been evacuated and many of them were in the process of returning to the city. Swaths of it was burnt, entire neighbourhoods consumed by what would grow to be a 590,000 hectare fire that residents named The Beast. It destroyed over 3,200 buildings and homes in the area.

That’s when Arndt landed in Fort McMurray, ready to play football. He’d lead the Fort McMurray Monarchs of the Alberta Football League (a 21-plus men’s competitive league) to a championship that year.

“It was very fresh for a lot of guys. Some guys that I played with there had lost their homes. I felt the impact as soon as I got there,” Arndt said.

“Outside of football we would talk and I got a good idea of what the people living there were going through and some of the obstacles they were obviously facing.

“It’s hard to find words for some of those things. But it was cool to be able to play that season, when they were thinking about not doing it. It really is funny how things work and come full circle.”

Arndt got the opportunity through a former college teammate, who happened to be playing for the team that year. It was a powerful thing, he said, to play for a team in a community that had gone through something so heavy and to watch it start to rebuild.

“Our motto for that season was ‘for team and city,’” he said.

“That rang true to the end. We were able to go undefeated when I was there, which was a cool story. I was glad I was able to give the community something positive in the aftermath of that. I’ll always be grateful for my time there. I’m grateful for that and glad to be in Ottawa.”

Arndt signed with Ottawa in Sept. 2017, coming in on the team’s practice roster. He sat behind Trevor Harris in 2018 and up until this week, had been the third-string QB behind Dominique Davis and Jonathan Jennings. At 3-11 this year, head coach Rick Campbell is thinking about the future and wants to see all of his options at QB. 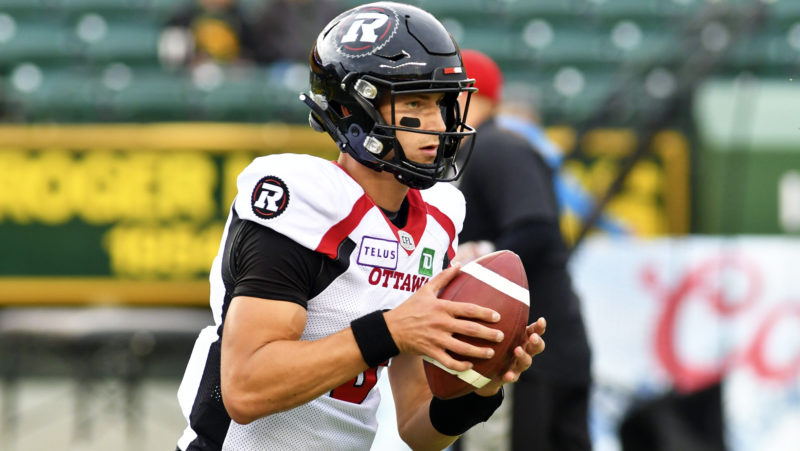 Arndt will look to help the REDBLACKS to a victory in Toronto on Friday night (Walter Tychnowicz/CFL.ca)

It will be interesting to see what the six-foot-five, 215-pound pivot can do with a full week of practice with the first team. Arndt has seen action in four games this year, making 20 of 36 passes for 185 yards, with two interceptions and has rushed six times for 31 yards. This will be the first start of his career.

“First and foremost I want to win football games,” Arndt said of his opportunity this week.

“However, whatever it takes, that’s my goal for my teammates, my coaches and the organization. I’m just preparing, trying to keep things in perspective and go out there and play with conviction and play with purpose and let the results take care of themselves.”

As simple as it sounds, a win would go a long way for a REDBLACKS team that’s lost seven straight games. Ottawa last won on Aug 2, beating Montreal in overtime.

“We’ve got great guys in our locker room, coaches that are working hard,” Arndt said

“I’ve found in my time in football that the margin between good and bad is really a lot smaller than people think.

He’ll have the support of his teammates on Friday night, but there’s at least one more person in his corner out of Winnipeg. Blue Bombers’ offensive coordinator Paul LaPolice tweeted encouragement to Arndt on Thursday night. Both have ties to West Connecticut.