The BC Lions have taken the first step in righting the wrongs from a 5-13 season by firing head coach DeVone Claybrooks.

As often happens in these situations the same man who hired Claybrooks, general manager Ed Hervey, did the firing and will be looking for a new head coach.

“I’m disappointed in the season, frustrated where things went this year,” Hervey told a news conference at the Lions’ training facility Wednesday. “Decisions have to be made.”

Team president Rick LeLacheur said firing a coach is “never nice but is part of the game.”

“We failed as a team,” he said. “We failed on the field, we failed off the field. It’s our job to make sure we fix it.”

On the marketing side, the Lions would have trouble selling tickets next year if Claybrooks was still on the sideline wearing his hat at a slightly twisted angle.

“We have to look at the organization as a whole,” said Hervey. “There’s a business to this as well. If we’re not winning everything else becomes part of it.”

On the football side, Hervey was frustrated by a lack of structure in the Lions’ dressing room. Claybrooks is a big man, with a big personality who maybe didn’t always enforce discipline and hold players accountable.

“Structure is extremely important,” said Hervey. “Accountability is high on my list of priorities and a level of discipline must be there.”

As a CFL veteran, Hervey said it doesn’t take long for players to take advantage if a coach doesn’t apply the rules. If there is no consequence for a player being one minute late for a meeting today, he may be three minutes late the next day and bring a cell phone into the room with him.

» Claybrooks dismissed as Lions head coach
» O’Leary: What’s next for the non-playoff teams?
» Hervey: We didn’t live up to expectations

“You start to realize there were things there that needed to be looked at. Here we are today with the decision made.”

When Claybrooks spoke to the media Monday during the Lions dressing room cleanout he acknowledged some situations might have been handled better.

“You can’t let any detail go, whether it’s a violation of dress code or something like that,” he said. “Because . . . if you allow those things to go, those are the things that creep in when it’s a pivotal point in a situation on the field. It’s just little things like that, that we’ve got to explore and we’ve got to look at and we’ve got to fix.”

Claybrooks was hired last December and had the difficult task of following Wally Buono, who retired as the coach with the most wins in CFL history.

Claybrooks had spent seven years on the Calgary Stampeders coaching staff, the last three as defensive coordinator.  The 42-year-old native of Martinsville, Va., spent 11 years playing defensive tackle in the NFL, CFL and in Europe.

Hervey gave Claybrooks a lot of tools to work with, signing free agents like quarterback Mike Reilly, wide receiver Duron Carter and offensive lineman Sukhn Chungh. A season that began with high expectations soon spun out of control as the Lions won just one of their first four games and quickly sunk to 1-10.

As a rookie head coach, one of Claybrooks early mistakes may have been hiring assistants like Nik Lewis, Drew Tate and Chris Ellis who had never coached in the CFL before.

The future of the Lions’ assistant coaches remains in doubt, but Hervey said having a staff with some experience is a good thing.

“Experience plays a big part in this business,” he said. “Players are very keen on recognizing experience, inexperience. If you show a player or two you don’t know as much as you think you know, it can go sideways.”

Hervey also plans to have “a deeper dive into the interview process of the assistants as well.”

Several names have already been mentioned as possible successors to Claybrooks.

Rick Campbell parted ways with the Ottawa REDBLACKS earlier in the week. Hamilton defensive coordinator Mark Washington both played and coached for the Lions.

Hervey said he won’t rush to make a hire since some potential candidates are on teams involved in the playoffs. 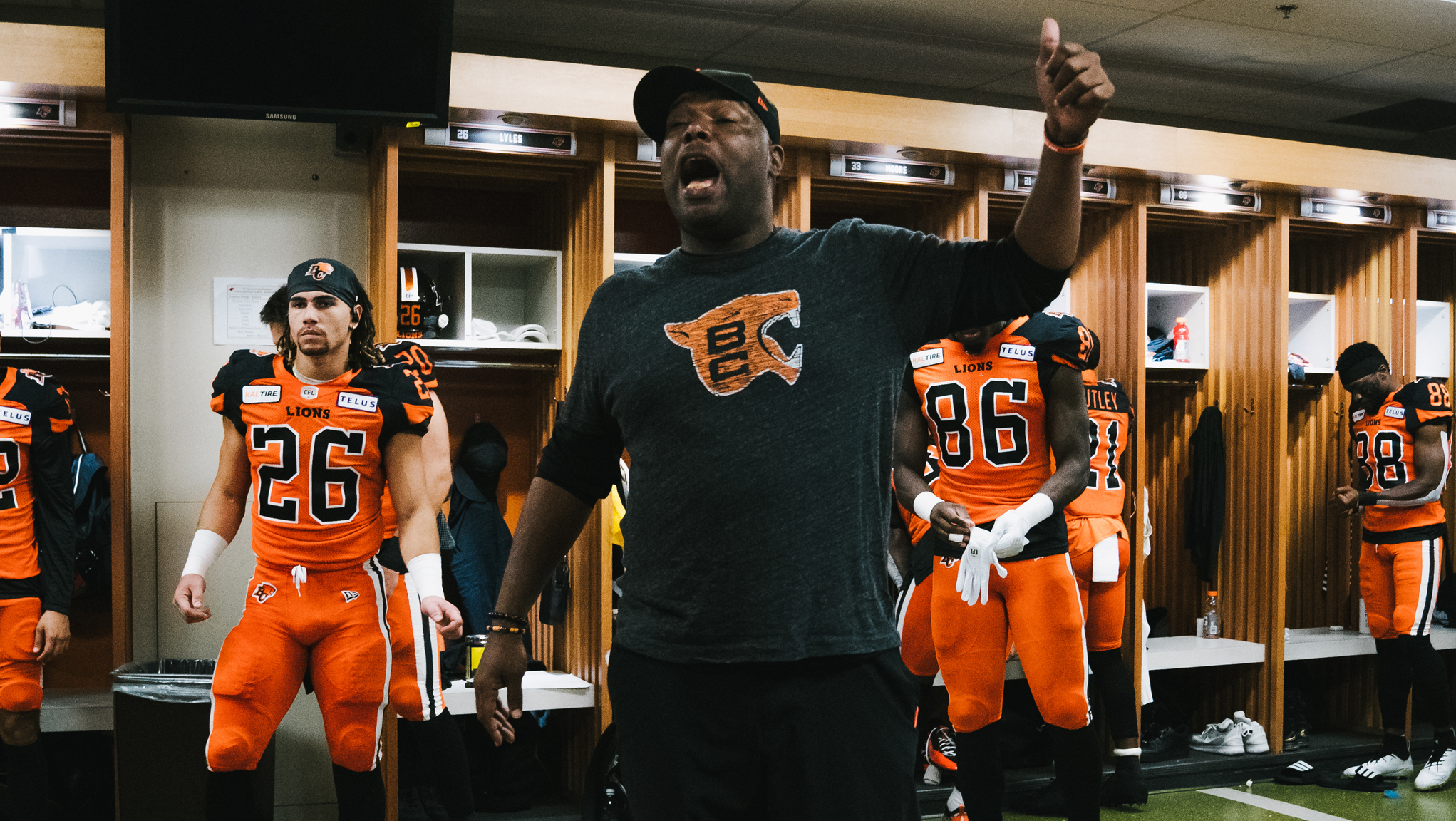 Despite rallying his squad down the stretch, a few wins in the final third of the season wasn`t enough to save DeVone Claybrook’s job (BCLions.com).

“I want to make sure the process is thoroughly done,” he said.

“There are still teams playing and still candidates out there that I would imagine we’d want to talk too.”

“Why go through the process of someone who doesn’t know the league?” he said. “I don’t want to sit around teaching someone the CFL. We’ve seen examples of it.

“It’s going to be somebody who fully understands the CFL game and surrounds himself with people who know the game in and out.”

Hervey does take some responsibility for the lost Lions’ season but is confident about next year.

“I’m just as guilty for a tough season as we all are,” he said. “I feel we have continuity coming out of this season. I feel that moving forward we have a foundation to build on.

“We’re not as far off as our record may indicate. There are other areas where we can grow and get better.”