EDMONTON — It’s been a whirlwind couple of months for Edmonton Eskimos general manager Brock Sunderland since the conclusion of the 2019 season.

He opted to relieve head coach Jason Maas of his duties in order to go in a new direction with the team. His coaching search took him down to Florida and to the door of Scott Milanovich, who accepted the position, leaving a QB coaching job with the Jacksonville Jaguars in the rearview.

With under a month until the opening of free agency, the Eskimos announced their coaching staff for the 2020 season on Wednesday, headlined by veteran coach Noel Thorpe, who will take over as the team’s defensive coordinator.

“Obviously, to get the head coach in place and get the majority of the coaching staff in place helps us in free agency,” Sunderland said to Esks.com. “I want to get their thoughts on our roster and some free agents so that’s what we’re doing this week. We’re going to watch film collaboratively and gather a plan of attack.

“It’s a key cog. Now we’ve got a leader for the locker room and direction there. Everyone knows who we have as a head coach so that was a first step for sure.” 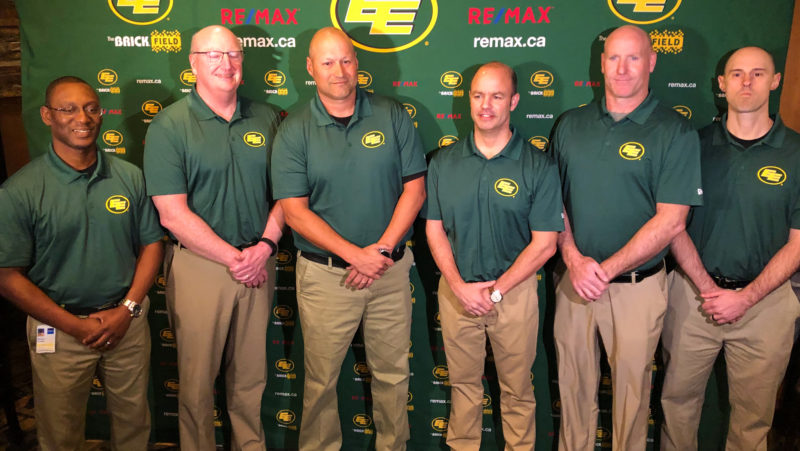 On top of his head coaching duties, Milanovich will also be the team’s offensive coordinator. There is a good mix of returning coaches and new faces that will enter the Esks’ locker room next season.

“I kind of came into this with an open mind,” Milanovich said about bringing back the trio of coaches. “I relied on a lot of people I know and their opinions of some of the guys that were here. With AJ, we interviewed him, he came highly recommended. The same thing goes for Derek.

“It’s always good if you can keep some guys and have continuity and the players have relationships with. I try to do that but it certainly wasn’t something that had to be done.”

Milanovich will be able to come into an offence that is headed by Trevor Harris. The pair know each other well from their time with the Toronto Argonauts.

Milanovich said that he’s stayed in touch with the pivot over the years and feels extremely comfortable with the man tasked with running his offence on the field.

“The fact that he knows me and I know him, I know what he’s good at and that will make things happen quicker,” Milanovich said. “The system will be different a little bit but there will be some similarities. There will be a lot of carryover for him.”

There are some aspects of the offence that are still up in the air. The Esks re-signed running back Shaq Cooper to an extension but still have not come to terms with veteran rusher C.J. Gable. They could choose to go younger and make the 26-year-old Cooper the feature back.

Edmonton also had one of the deepest wide receiving cores in the entire league in 2019, with several individuals pitching in on a weekly basis. Star pass-catchers Greg Ellingson and Ricky Collins Jr. are under contract in 2020, as is Natey Adjei and Tevaun Smith. DaVaris Daniels, on the other hand, remains a pending free agent.

Thorpe will be inheriting a defence that was one of the best in the league last season, leading in yards allowed per game (222.9) while sitting tied for first in sacks (56). Star defenders Mike Moore and Larry Dean can both hit the market come February while Nick Usher was released on Jan. 2 in order to pursue opportunities in the NFL. There are also a number of starters in the secondary in need of new contracts.

The new DC can either bring back some of those players or opt to look to build the defence how he sees fit. Regardless, Thorpe knows how he wants his unit to play.

“Pressure, running to the ball and relentless pursuit,” he said of his expectations for the defence. “We’ve got to affect the quarterback and get turnovers. The keys to victory lie within protecting the football and taking the football away.”

The relationship between Thorpe and Milanovich will be crucial in 2020. The new Edmonton HC said that while he’ll have a hand in all facets, he’ll be leaning on Thorpe.

Thorpe has held defensive coordinator positions in the CFL for the past seven seasons. Following a stint as the DC for the University of Montreal from 2011-12, he joined the Montreal Alouettes in 2013 and held that position until 2017. He then joined the REDBLACKS and has led their defence for the previous two campaigns.

As the old adage goes: “Defence wins championships.” It proved true when the Blue Bombers were able to hoist the Grey Cup in 2019 and Edmonton will be hoping that Thorpe can help the Esks’ defence continue to dominate. For now, he’s getting re-acquainted with the city and looking forward to the season ahead.

“The weather hasn’t changed, the lay of the land has a little bit,” Thorpe said. “I finally get to see the new stadium and offices there and how top-notch the facility is. The people continue to be great here; they welcomed me with open arms and it’s great to see some familiar faces.