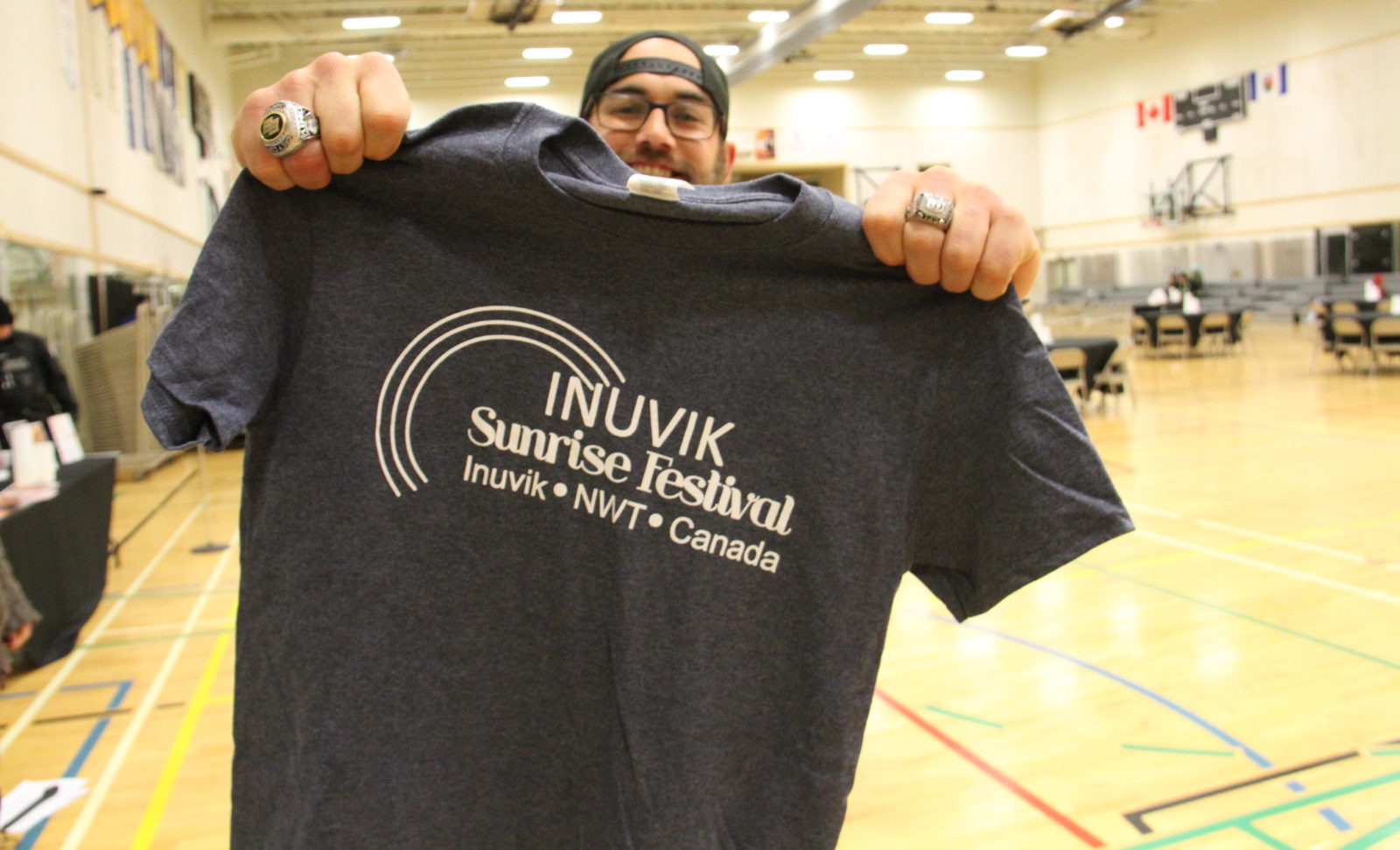 Ryan King rode through the darkness and the bone-chilling cold of a month-long night nearing its end when he realized he was having one of the best experiences of his life.

The Edmonton Eskimos long snapper was on a snowmobile outside of Inuvik in early January, on his way to visit a hunting cabin that a local family used.

“We got to talk to some of the community’s prized hunters about how they hunt and how they use the moon, how they operate. It’s so cool to see all of that and be right there,” King said from Edmonton this week.

“To experience something like that was something I’ll never forget.” 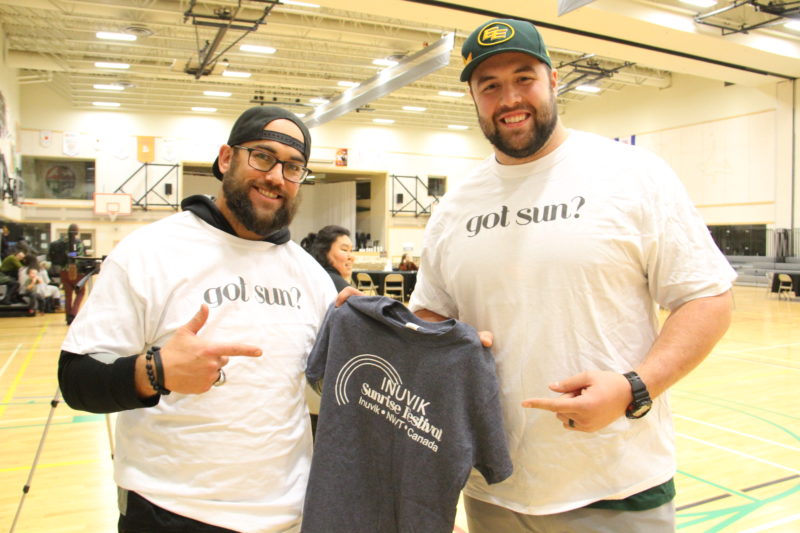 Ryan King (left) and David Beard (right) joined members of the Edmonton Eskimos organization on a trip to Inuvik for the Sunrise Festival (Allan Watt/CFL.ca)

King, along with offensive lineman David Beard and team spokesman Allan Watt made the trip to Inuvik to take part in the annual Sunrise Festival, which ran from Jan. 3 to 5. In early December in Inuvik, the sun disappears behind the horizon for about 30 days. Its return is celebrated by locals with food, dance and winter activities. The festival is capped by a giant bonfire and fireworks.

“The way I describe it is it was a real treat and a real privilege to be able to go up there,” Beard said.

“(To) be a member of the team that went up for the second time and be able to see some of the relationships that were already built and be able to develop some new ones was a real treat. A privilege,” Beard said.

The trip was a part of a developing relationship between the organization and Canada’s Inuit community. It started with former team president Len Rhodes, who made a trip to Yellowknife and Inuvik in 2018 after the organization was met with requests to change its name. The visits and discussions have continued since Rhodes stepped down as president last year. Watt has been around the team off and on in various marketing and communications roles for years and had no problem heading up the continuing efforts to meet with communities in Canada’s north.

This was King’s second trip up north. In October, he and defensive back Godfrey Onyeka went to Inuvik and Tuktoyaktuk along with the team’s community relations coordinator and former o-lineman Andrew Jones to give presentations to kids on football and anti-bullying. They spent a few days with the locals there during the team’s bye week and before they left they were invited to return for the Sunrise Festival.

“I was probably just as excited as they were for myself to go back and to see everyone we met the first time,” King said.

“You meet all the kids in the schools and you meet a lot of the people in the community and create a quick relationship with them and it’s definitely nice to follow that up so quickly after.

“I know the community was real excited to have us back up there to enjoy their festival. The first first time I went there it was for us to give back into their community and talk to all the kids and all that. This time we got to be a part of the festival but as well we got to enjoy the festival which was culturally one of the coolest experiences I’ve ever have ever had.”

We often talk about the lack of daylight in December and January in Canada. Both King and Beard said that the five days they spent in Inuvik were challenging because of the complete lack of daylight that preceded the Sunrise Festival.

“I did some research on it before I went up,” King said. “But until you’re in it, it’s a whole new beast. I’d never experienced that before.” 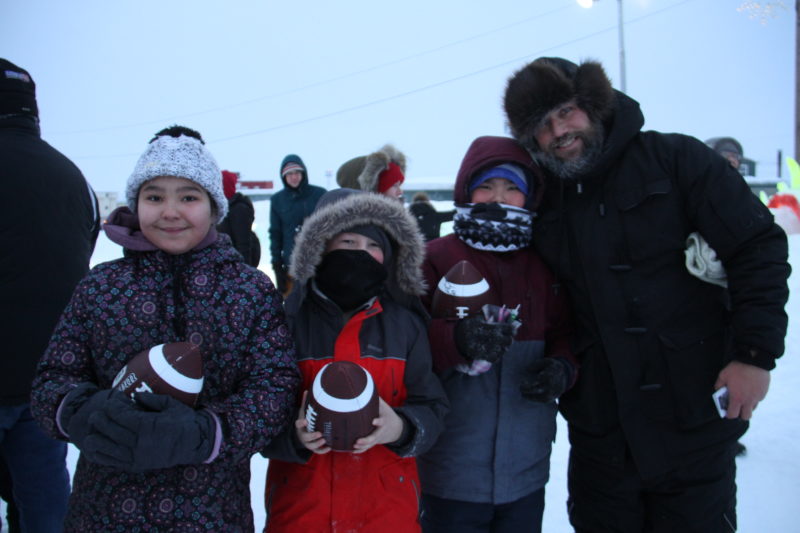 Ryan King poses with some Inuvialuit children at the Sunrise Festival in Inuvik (Allan Watt/CFL.ca)

Beard knows the challenges of northern Canada well. As a kid, his family moved around the Northwest Territories — his father is an RCMP officer and his mother is a teacher — which allowed them to live as far north Ulukhaktok, also known as Holman. They lived near Inuvik in Fort McPherson and in Tulita. They eventually moved to the Edmonton area, which is where Beard started playing football. Today, his parents are back in the Northwest Territories, living north of the Alberta border in Hay River on the shores of the Great Slave Lake.

“To be at the Sunrise Festival, that added a whole other flavour to (being in the north),” Beard said.

“I’d been up there with family but it was so much more special to hear it from some of the locals that had stories to go along with the experience. Not only is it a very interesting experience but it also had some legitimate physical ramifications.

“Talking to some of my new friends up there, hearing stories about how it makes them feel different and that’s why they celebrate the return of the sun. It’s almost the depressive state you’re in during the darker period…it really is a tougher time of the year for people, so that return of the sun is really a special time. It’s a big festival that lets everyone celebrate and come together as a community. It was pretty cool to be a part of that, to be invited and have them be so welcoming.”

The players spent their time mixing with the locals, throwing mini footballs with them, eating local dishes and enjoying the festival, in spite of minus-50 C temperatures. When King was offered the chance to see a local family’s hunting cabin, he jumped at the chance.

“The doors opened up to the community and the culture,” King said.

He learned about the family’s history with hunting and the ins and outs of setting traps. He saw furs and pelts of polar bears, arctic foxes and seals.

“It was inspiring to see how happy they all are in that community; even though they go through tough times and go through cycles in darkness and lightness, that community was just so welcoming, so warm, so inviting, so engaging in conversation. They wanted to be a part of our culture too, in a sense. They were for inviting us to come over for tea and see all of their art.

“It was something that I’d bring someone back that’s never been just so they could experience what I got to experience.” 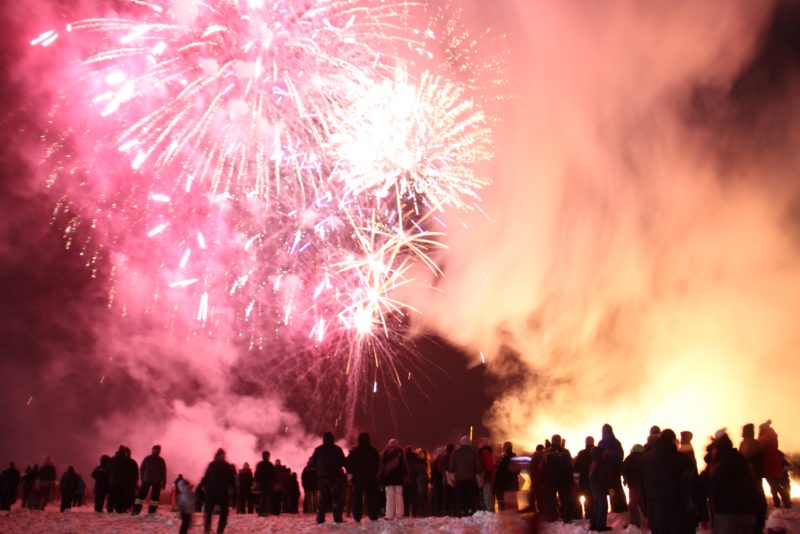 After Inuvik’s first sunrise and sunset of the year, the locals celebrate with fireworks and a bonfire (Allan Watt/CFL.ca)

The sun finally peaked over the horizon on Jan. 7. It showed a cloudy day and less than 51 minutes later, it had dropped back out of sight.

“It was a big deal,” Beard said of the moment the sun crested the horizon. “We came to appreciate the importance of (the sunrise), hearing stories and seeing what it was really like living and staying in a place in the dark for a long period of time.”

The name change debate is one that will likely continue for some time and one that the organization continues to listen to the Inuit community on. Whether it was Rhodes, Watt or any of the players that have have travelled north, all have returned appreciative of the relationship that’s developing. After the team’s trip to Inuvik in October, they hosted a trio of Inuvialuit kids that had won youth service awards, bringing them on field before their game and later in that weekend, bringing them to an Oilers game.

It’s something they want to continue to do in the future.

“I knew there would possibly be some opportunities to experience some cool things wearing some of the team colours,” Beard said, thinking back to when he was starting his CFL career in 2015.

“I didn’t realize it’d be this amazing and so unique and in such a long distance way.”