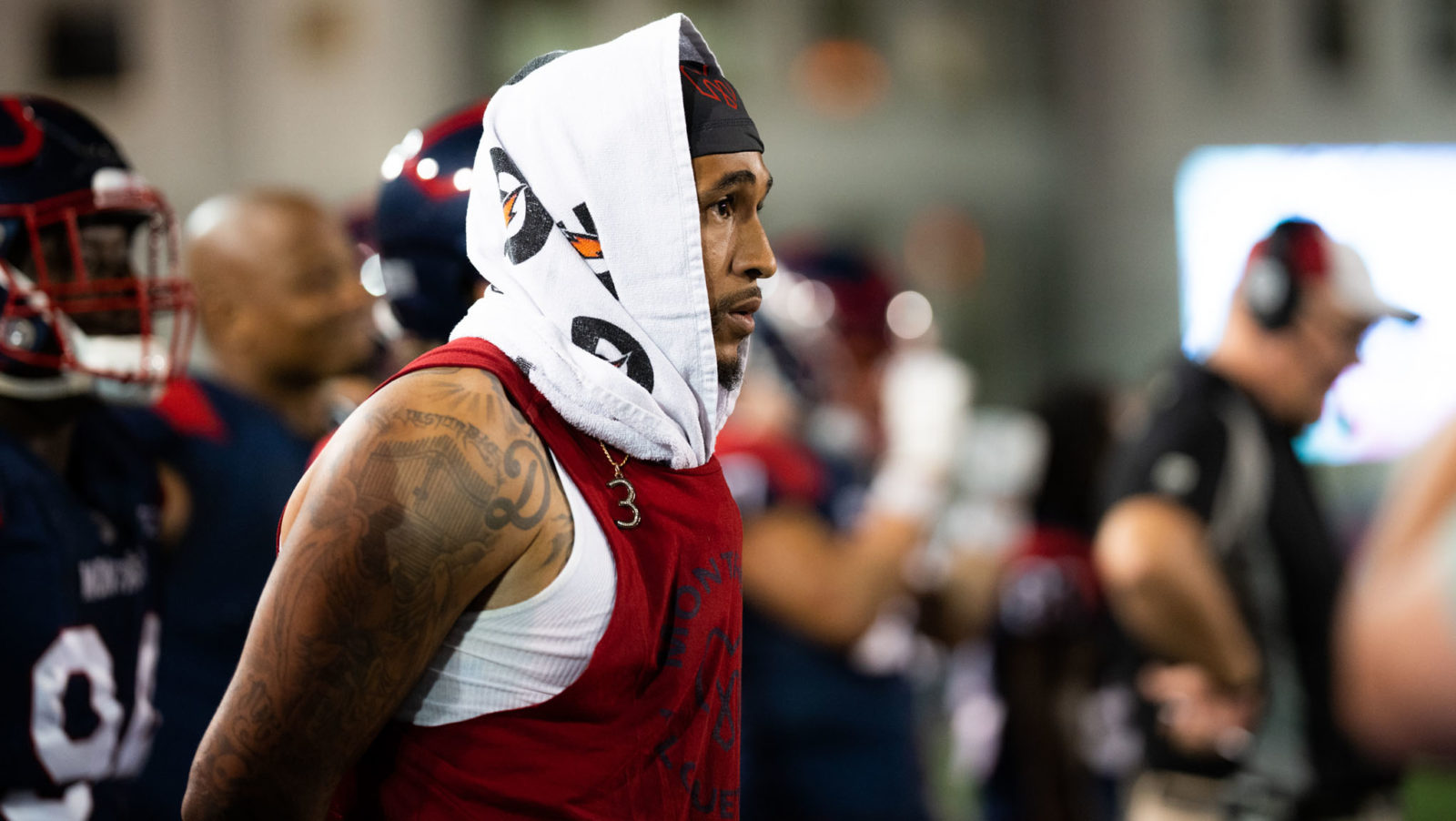 It’s around this time in the off-season that CFL players really start getting ready for the upcoming season.

Yes, they’ve been working out and training all winter, but when spring starts to peak its head into existence in March, QBs, linebackers, defensive backs and everyone in between, start to get themselves prepared for training camp and the brand new campaign.

Some players like to train and workout by themselves, opting for solo gym sessions and on-field work. Others prefer to workout in groups, meeting up with teammates or other players from around the league while they train and then hit the field together.

RELATED
» Alouettes ink receiver Naaman Roosevelt
» All in this Together: Staying connected with #HowICFL
» O’Leary: Remembering some CFL first

But with our current reality of social distancing due to COVID-19, some players’ off-season routines have been completely disrupted and they now must figure out a new way to keep in shape from their homes.

Montreal Alouettes quarterback Vernon Adams Jr. is one of those players who prefers to workout in a small group and is now facing the challenge of training by himself.

“I like working with a few other guys so we can sit there and compete, motivate each other (in the gym) and then hit the field together afterwards,” Adams said over the phone on Wednesday. “That’s what it is normally, go to a training facility, train with some guys, go on the field and then after that, bond or whatever you need to do.

“But right now, how it’s changed for myself and pretty much everyone else, is you just have to get it how you can. Stay at home, workout at the house, bodyweight-type things and train by yourself and motivate yourself.”

For Adams Jr., it’s a bit easier to stay on his regular grind. He and his wife, Liz, renovated their garage, turning it into a complete home gym. There are boxes for box jumps (Adams Jr. is sometimes joined by his son, Kash, doing these), weights and everything else he could possibly need to keep his body in tip-top shape.

The only thing missing is the on-field work with his pass-catchers but the five-foot-11, 200-pounder has started to figure that out as he goes.

“I just ordered a quarterback net,” he said. “So as far as we’re doing social distancing, hopefully my quarterback net comes (soon) and I can just work with that, pretend that’s one of my receivers and go from there.”

Just like most of us are doing to stay connected with our friends and family, the 27-year-old is keeping in contact with his teammates via text message. Most notably, he’s chatting with his receiving corps as he watches film from last season and works on little things to get better.

“I chat with my receivers every now and then,” Adams Jr. said. “Every couple of days, I’ll text a different receiver as I’m watching film and I’m seeing something that B.J. (Cunningham) or Geno (Lewis) did and I want them to clean it up, I’ll send it to them. We chat like that.”

The newest face in the Als’ receiving group is Naaman Roosevelt, who signed with Montreal as a free agent in February. He’s no stranger to the Als’ pivot, however, as the pair were together in Saskatchewan in 2017. That familiarity, aided by a mini-camp that Adams Jr. put on for his offence a few weeks ago, will ensure the chemistry is there between the pair, despite not working together very much ahead of camp.

“I wasn’t (Roosevelt’s) starting quarterback but I definitely threw with him a little bit,” Adams Jr. said. “And we had a little mini camp that I put together for myself and the receivers and I got to get some time in with him then as well. He’s a vet so it’s not like he needs to learn everything all from the start from scratch. It’s just playcalling and different terminology.”

Roosevelt joins receivers Cunningham and Lewis, and newly-signed running backs James Wilder Jr. and Tyrell Sutton (who was an Alouette for six seasons), in an offence that Adams Jr. is confident can be one of the best.

“For us as an offence, especially, we’ve got majority of our guys coming back on offence,” he continued. “We’re just trying to hold everybody accountable, and make sure everybody does their job and if that happens, and nobody can really stop us. We’ve got the chemistry, we’ve got the players, we’ve got the coaches, got the GM and owners, everybody’s in place now. Now it’s all about just doing your job.”

Montreal finished the 2019 season with a 10-8 record – the franchise’s best since 2012, where the team finished on top of the East (11-7). They also secured their first playoff berth since 2014 before ultimately losing to the Edmonton Eskimos in the Eastern Semi-Final.

But for Adams Jr., last season was just the start of what’s to come for this Montreal Alouettes’ squad and for him, there’s a lot more to prove heading into the new campaign this summer.

“I definitely think there’s a chip on our shoulders now as a whole,” he said. “You know, we lost in the playoff game but we proved a lot, like you said, we proved to everybody in 2019 that we can be a contender.”