The games mark the past giving way to the future and a glimpse at how much sport has changed not only in Canada but around the world over the last 50 years.

RELATED
» Throwing it back: TSN airing a slate of classic CFL games
» Bennett hopes to bring sack king act to CFL
» O’Leary: Diving in on the top-five QB debate

By the time that the Ticats had reached the 2012 season, there was something of a love-hate relationship with Ivor Wynne Stadium. A walk through the stadium told you that its best days were behind it and that it was time for something more modern. Visiting players hated their locker room and its proximity to urinals. On my first trip to the stadium in 2011, legendary Edmonton Eskimos equipment guy Dwayne Mandrusiak showed me the setup in the visitors’ room, including a bathroom stall that when opened at the right time gave you the most unique seat in the house to see the game live as it happened.

When the mood was right in the building, or if you wore the wrong shades of Double Blue, visitors were drowned in the monsoon of noise that poured over them. It felt at times like the fans were overtop of the players, held back by an unforgiving concrete wall that was a little too close for comfort to the sidelines.

“The visiting players really did not like it because you got the heckling Hamilton fans breathing down your neck behind the dugouts,” said former Ticat receiver Andy Fantuz. He grew up 2.5 hours away from Hamilton in Chatham-Kent, Ont. and after six years with the Riders, he spent six more playing at Ivor Wynne for the Ticats. The 2012 season was his first in Hamilton.

“Of course, sometimes you could get hit into the wall or into a camera. There were leaks in the building. The facilities were…you know…suboptimal, to say the least,” he said, laughing as he tried to choose his words carefully.

“As Danny McManus mentioned on the broadcast (at the final game), he found out a lot about his mom from Ivor Wynne fans who were in close proximity to the sidelines,” TSN play by play man Chris Cuthbert remembered.

“Danny added that his Mom was OK once he became a Cat.”

But if Ivor Wynne was your home stadium as a player or a fan, those leaks, the proximity to the visiting team from the stands, the long, simple and colourful bench seating, it all felt like a unique home field advantage. Those bumps and scratches and scars equalled grit, character and charm. If it looked rough, it was because it was a little rough. It was Hamilton.

“It seemed every guy had a mickey (a small bottle, usually of rye) under his seat and each bought mix in the form of a “container” of Pepsi: A large carton that came with small cups, for sharing,” said Matt Maychak, the CFL’s chief communications officer. He grew up in Hamilton and his parents brought him to his first Ticats game, when it was Civic Stadium, in 1968. He was instantly hooked on everything: The game, the people, the stadium.

“No child today could match the experience I had when I walked into that stadium for the first time, because so much has changed since then,” he said.

“For starters, the scene was so colourful because I had only seen games on a black and white TV. The programme sold at the front gate was so overflowing with information because the internet was far off and the local paper carried a single Ticat story on most days.

“The place seemed so big to a kid who had never been on a plane and whose family did not own a car. It was so much bigger than church.”

“It was an old school feel where people are proud of the way (the stadium) is. It was very blue collar, just like the city itself. There’s a lot of tradition,” Fantuz said.

“Across Canada a lot of the steel, everything came from Hamilton, so a lot of Canada was built (with material) coming from Hamilton. So it’s really a foundational place and a lot of different aspects of life started at that place or in that area.”

Cuthbert remembered a “terribly inclement late October day” when he arrived at Ivor Wynne to call the game.

“I guess for that stadium it was only fitting that even the weather for its final game would be miserable,” he said.

“The Ticats came out with the franchise greats circled at midfield. To have legends like Garney Henley, Angelo Mosca, Joe Montford and Danny McManus there added to the sense of occasion.

“On a personal note, it was one of my favourite broadcast locations because of the great sightlines. I’m sure it was the least favourite among visiting players. The shallow sidelines and cement walls on the sidelines were always an issue. Unlike Sask, the ‘Cats won their stadium finale but didn’t have a post game ceremony that I recall.” 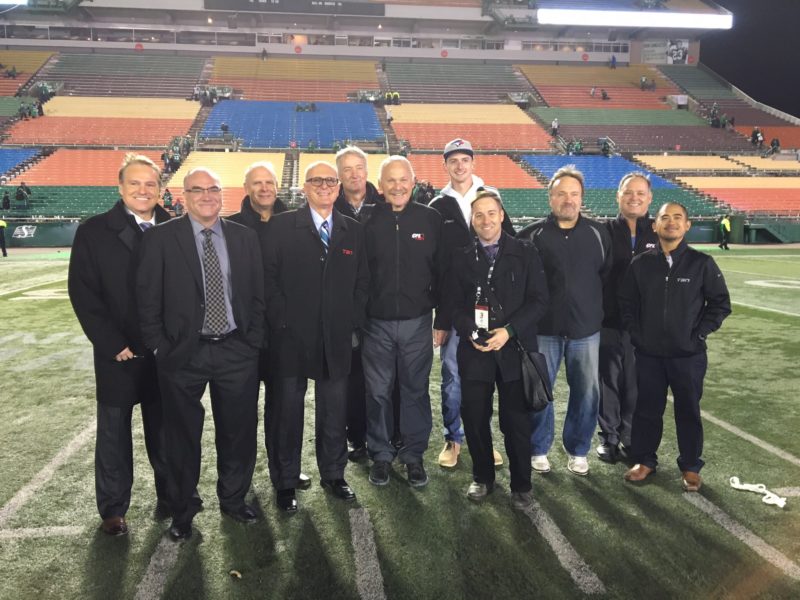 You’ll hear Cuthbert’s voice carry over into the second half of Friday’s double header. He was there when the figurative green curtain came up on new Mosaic Stadium on Canada Day, 2017 and also when the final game was played at the old stadium.

“Mosaic (closing) felt very nostalgic, like people were moving out of a house that they had lived in for a lifetime. The atmosphere was electric, as it usually was,” he said of the Riders eventual loss to the BC Lions.

“The highlight of that game was the postgame ceremony. The lights going out, the green lights shimmering in the stands and the roar for George Reed, Roger Aldag, Gene Makowsky and Darian Durant was memorable. Durant certainly got his well-deserved share of love that day in his Rider farewell.

Working the Hamilton finale and then the Saskatchewan finale four years later, Cuthbert kept circling back in his mind to someone that linked both teams.

“I thought a lot about Ron Lancaster on both days. They might still be cheering if Ronnie and George would have been able to stand together at midfield for a final curtain call,” Cuthbert said.

“In Hamilton, Ronnie had made such an impact in rebuilding the Ticats after some lean years. Neither (old) stadium was an architectural gem but for sight lines, history and atmosphere they were two of my favourites.”

Dan Clark, feeling very much at home at Mosaic Stadium in 2019 (Arthur Ward/CFL.ca)

Riders’ offensive lineman Dan Clark grew up in Regina and played football on Taylor Field at old Mosaic for much of his life. To be a part of the Riders team that opened that new stadium, a state of the art, NFL-like venue complete with team facilities centralized there, was a career highlight.

“We’re spoiled rotten as football players, having everything that we need underneath one roof,” Clark said.

“One of the exciting things for myself was having all of us together under one roof. We used to have our gym four blocks away. Our business office was six blocks away from us. Having that opportunity to have us all together and have that family atmosphere was something that was very important, and I really enjoyed that level of it.”

“Reflecting back on Canada Day, 2017, given the current challenges we are all collectively facing it seems like a decade ago, but it’s also a day and a moment that was so monumental for the team, the province, and our fans that I can go back there instantly,” Riders president and CEO Craig Reynolds said.

“I’ve honestly never felt energy like that in a building before. The buzz pre-game, the energy with it being Canada Day, there was just a sense of unbelievable pride. Our fans were so proud that we went from a stadium that, although it had amazing energy and nostalgia, was nowhere near world-class, to this stadium that was just so amazingly designed and as good as any stadium of its size anywhere.”

It felt like a payback to the Rider fans, a group that stretches far beyond provincial borders and historically has endured its share of hardship, both on the field and in terms of the team’s overall wellbeing.While the Riders had been in a good place financially well before the new stadium opened, Canada Day 2017 felt like a reaffirmation of where the team stood and what its future could hold.

A state of the art football facility, Mosaic Stadium is revered by Riders fans (Johany Jutras/CFL.ca)

“I just kept thinking about how much our fans and our fan base deserved this (for) their loyalty and their support,” Reynolds said.

“To feel that sense of pride and to see it in our fans’ eyes as you walked past them was amazing.

“I think about our players coming out of the tunnel for the first time and it being just that – there will only be one first time to come out to the roar of that crowd.

“And of course, I thought of the support and commitment of everyone to make the stadium happen. The support by our provincial government for the facility and just how much it was reflective of all that Saskatchewan had become. The leadership of the project by the City of Regina and how much time and effort members of that project team put into the design and build of that stadium.

“Then of course, our team that participated in the design and the process to get to such an amazing stadium that our fans are so proud of. It was such a perfect day – other than the result on the scoreboard — that is the only thing upon reflection I would have wanted changed!”

Somewhere in that crowd in Regina that day, a kid sat with his parents at a game for the first time and fell in love with everything around them. These things are cyclical in our lives. We outgrow the venues we loved and something bigger and better takes its place.

“We grew old together, the stadium and I, even if it had a head start,” Maychak said of Ivor Wynne.

“Still, I felt like a 10-year-old kid again every time I walked through the gates, no matter how many times I did.”