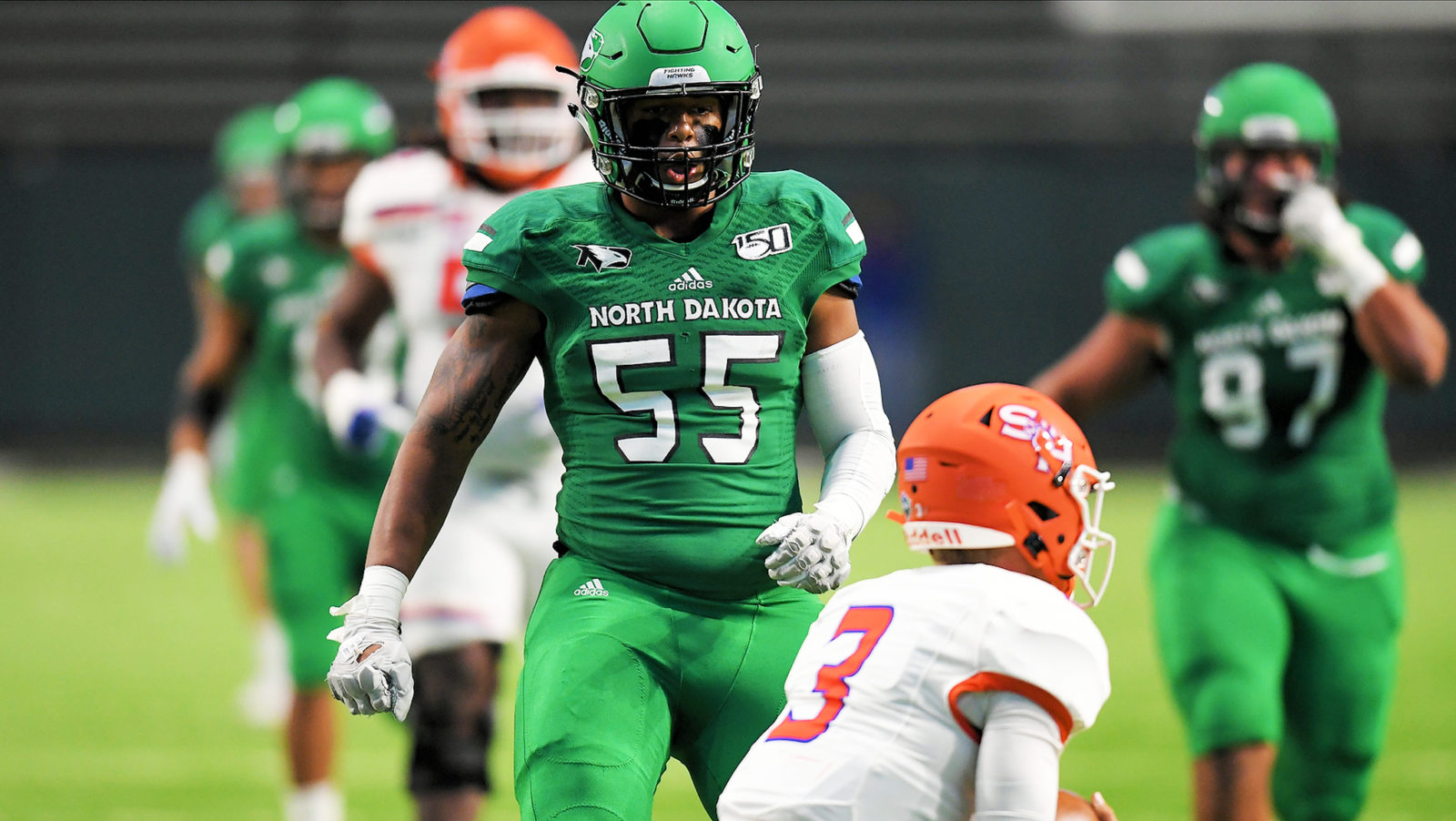 There were high expectations for defensive lineman Mason Bennett coming out of high school.

Rated as one of the best national players in his class, the Winnipeg, Man., native had the choice between playing for some of the best programs in U SPORTS or heading south for a chance to play Division I football. He chose the latter and became one of the all-time greats at the University of North Dakota.

Bennett has proven his ability to get to the quarterback during his time with the Fighting Hawks and the pass-rusher shouldn’t be waiting long to hear his name called later this month at the 2020 CFL Draft.

RELATED
» Acheampong: ‘Any team that’s willing to give me a shot, I’m game’
» Williams dedicated to making pro football dream a reality
» Sinagra ready to make the most of CFL opportunity 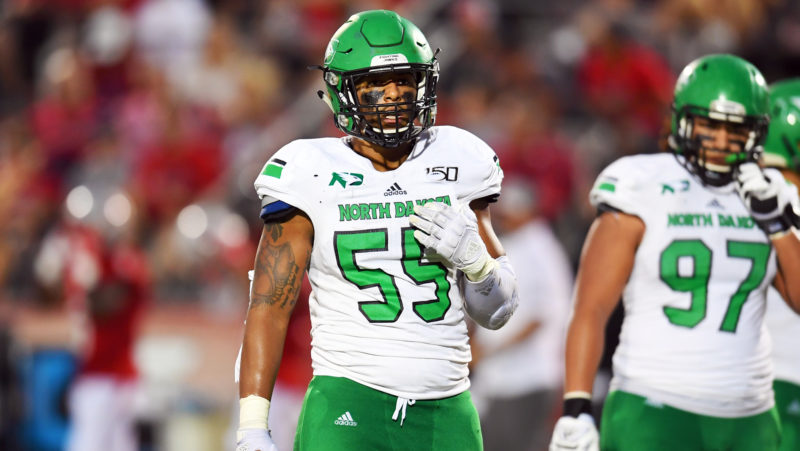 Bennett’s mother got him into football when he was just six years old. At the time, he played a number of years in his local youth football organization for the Fort Garry Lions. He instantly fell in love with the game.

He was a defensive end coming up as a kid, but as one of the bigger kids on Vincent Massey High School’s junior varsity team, he was utilized as both a left tackle and defensive lineman.

It helped him understand line play as quickly as possible.

“In practice, I’d be doing drills with the offensive line a lot and I’d be listening to the coach on their technique,” Bennett said. “When I transitioned to d-line, I was looking to see their offensive trends and their tendencies. It definitely helped my progression.”

When it came to choosing a college, Bennett wasn’t short on suitors. He was a top-five prospect in Canada and had a number of programs looking to land his services.

“It was difficult. It was a stressful time at the moment but looking back at it, it was pretty fun,” Bennett said of the entire recruitment process. “There was another Canadian kid there, Neville Gallimore, so it’s pretty funny how we were the two Canadian guys tearing it up.

“It was solid, especially with the Canadians talking to some (American) schools and getting our name out there, it was interesting.”

He ultimately landed with North Dakota, which is just a shade over 2.5 hours south of his hometown.

Bennett redshirted his first year at the school. The team had brought in a multitude of defensive lineman along with Bennett. But in the year following, there wouldn’t be as many recruits at the position, giving the Canadian a chance to impress the coaching staff.

Generally, players in their first year on the roster take their time and ease their way into the fold. Bennett garnered attention immediately with his strong play, finishing the 2016 season with 17 tackles, 2.5 sacks and a fumble recovery while playing in all 12 games for UND.

“My very first game, I was told I might get in if we were down or up by a lot,” Bennett said. “Then the first drive — like six plays in — I got thrown in there. I did pretty good and got a sack in my first-ever game. That definitely helped the confidence to start my college career.”

He’d continue to show improvement every year. As a sophomore, he had three sacks, 30 tackles and 8.5 tackles for loss in 10 outings.

2018 would serve as his true breakout season. He started in all 11 of the games he appeared in on the season. Bennett led the Fighting Hawks in both sacks (9.0) and tackles for a loss (14.0) while adding 40 tackles. He finished just a sack short of tying the single-season record set by Eric Schmidt, who also served as Bennett’s defensive coordinator during his entire stint with the program.

“We talked about it a lot. We joked that if I was one away, he’d pull me out of the game or make me drop back into coverage,” Bennett said. “I missed a couple of close ones where I should’ve gotten it.”

Bennett capped off his collegiate career by posting 39 tackles, 5.5 sacks, 6.5 tackles for loss, two passes defended and a forced fumble in 10 contests. For his efforts, Bennett was named a 2019 All-American, making him the first in the school’s Division I history to earn the honour.

He also became the DI program’s all-time leader in career sacks in the process.

He appeared in 43 total games for the Fighting Hawks, posting 128 tackles, 31.5 tackles for a loss, 20 sacks, one forced fumble and a pair of fumble recoveries over that span.

“It was a goal of mine to be known as the sack king of North Dakota,” Bennett said. “That senior year, I got hurt. It was interesting seeing a lot of ups and downs, but in that last game, I ultimately got two sacks to pull the record away.”

Bennett has been speaking to several pro players he knows in order to get an idea of the process and what it’s like to play in the professional ranks. One individual that he’s been leaning on is Winnipeg Blue Bombers running back Brady Oliveira, who was a former teammate of Bennett’s at North Dakota.

He added that while he’s excited for the process, he hasn’t paid much attention to the rankings and mocks that have started to surface as draft day nears; although his mom does send over articles that mention him.

In his first mock draft, CFL.ca’s Marshall Ferguson ranked the talented pass-rusher as a top-1o prospect, having him land with the Saskatchewan Roughriders with the seventh overall pick.

“Mason Bennett will make any pass rush rotation he joins better, thanks to his flexible game and the resilient nature displayed in his game tape while fighting through all kinds of blocking schemes, chip blocks and double teams,” Ferguson said.

Because of his build and height, the 6-foot-4, 258-pounder likes to model his game after Kansas City star Frank Clark. He describes his game as one that uses agility and power to get to the quarterback. Bennett also says that he loves watching the game of reigning Most Outstanding Defensive Player Willie Jefferson, who’s able to use his long arms and height to bat down passes and get around offensive linemen.

He’s been able to see progress both on and off the field. His production between the lines and his leadership off of it landed him as a captain in his final year with the Fighting Hawks

“I remember coming in as a 17-year-old. I didn’t have any off-the-field issues, but just the way I handle myself in the public and the way I act around my teammates has changed,” Bennett said. “My maturity has risen so much since my freshman year. I think that’s what has translated to a lot of other things; in the classroom, the weight room and then obviously on the field.

In his final season at UND, Bennett had the ability to play in many different spots on the defensive side. He’d serve as an outside linebacker at times during sets on the goal line while also featuring in three and five techniques. Bennett was also used as a standing rusher off the edge. His versatility won’t go unnoticed by CFL squads who are always looking for individuals that they can plug into multiple schemes.

Now that his collegiate career has come to an end, Bennett can look forward to the next phase in his football journey, which will see him land with one of the nine CFL organizations at the end of April.

“It’s definitely cool to think about how my dream is pretty close to coming true,” Bennett said. “I don’t think it’s fully sunk in yet but I think as it gets closer to draft week and I get drafted, it’s gonna sink in a bit more.”