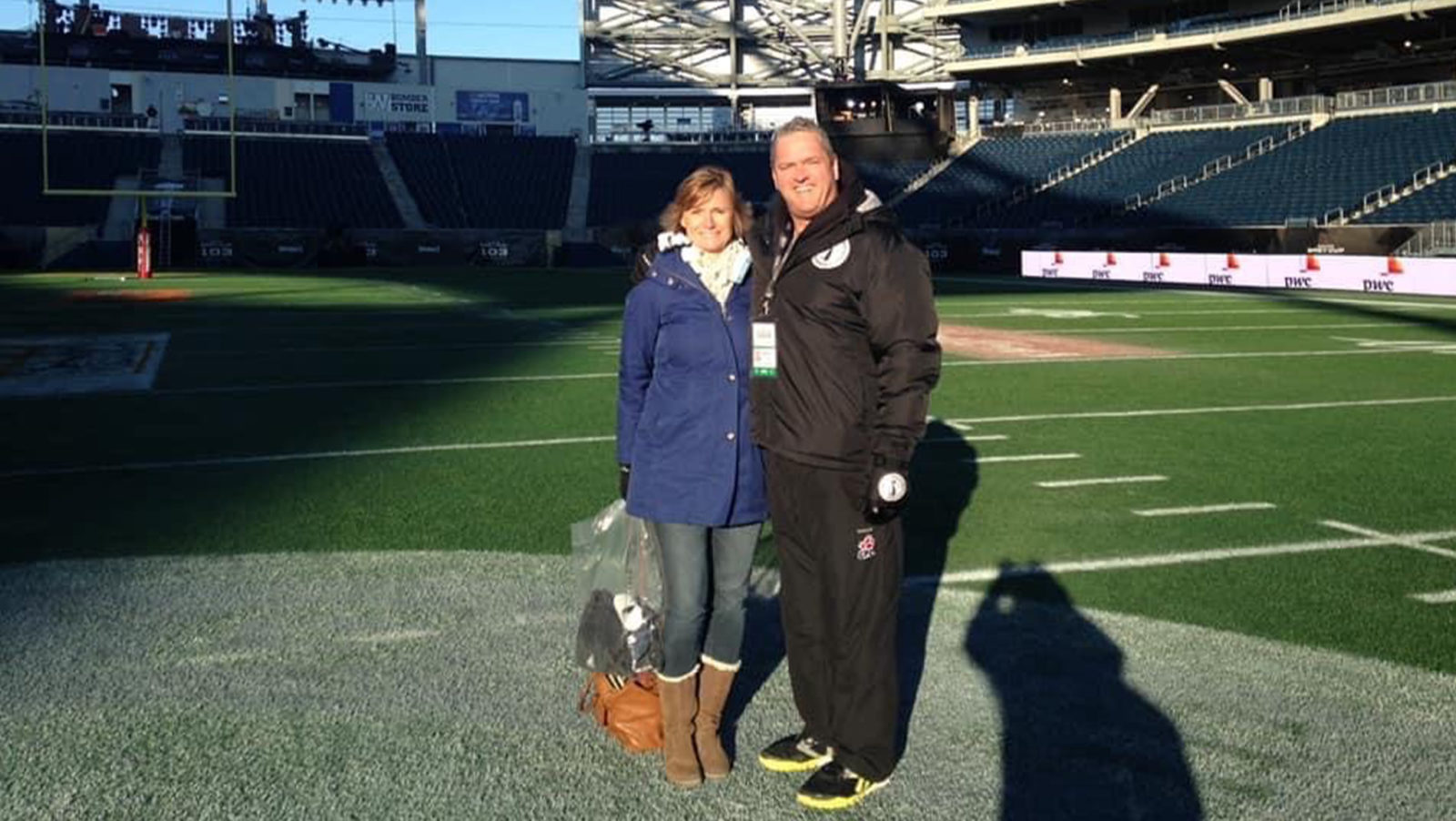 When Al Bradbury and his wife Martha arrived in Fort Lauderdale, Fla. on March 3, they were ready for what they thought might be the greatest of their many adventures together.

They’ve been able to see the world from the deck of their cruise ship rooms over the years. This trip — they guessed it was their 25th cruise — was a cross-Atlantic journey that would take them from Fort Lauderdale to Puerto Rico and eventually to Antigua in the West Indies, then Spain. There would be a stop in Italy, then on to Croatia and back to Italy. After the cruise they’d spend a couple of days in Venice before flying to Greece. There was a five-day stay in Ireland after that and a two-day visit in England before returning home to Winnipeg.

Al, a CFL ref for 20 years, had hit a milestone in his life. After almost 33 years, he’d retired from the Winnipeg Police Service.

They boarded their cruise ship and were aware of news reports about COVID-19 running through China, Italy and Iran but like so many of us, they looked around, saw that everything was normal and assumed it would stay that way.

“We were about five days in front of it, when everything turned,” Al said. He was seated next to Martha in their home in Winnipeg on a Zoom call, safely out the other side of what turned out to be a very scary journey.

“We’re prepared travelers. We’ve had it before where we had to make adjustments. We figured (the cruise) wouldn’t go to Italy and that was OK.” 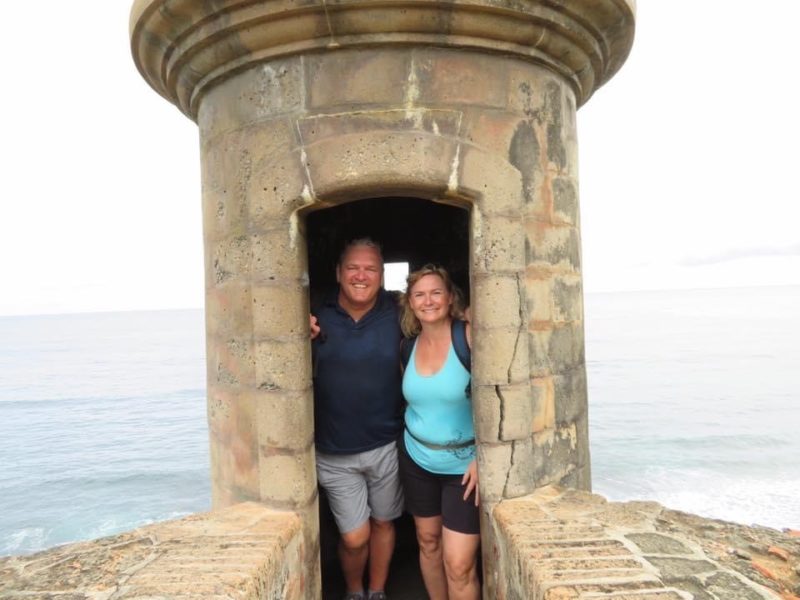 The cruise company confirmed that quickly, cancelling the Italy portion of the trip, which would have them off of the boat five days early. Before they’d made their first stop in Puerto Rico, they were weighing options. Do they get off the ship and explore Mexico? Turn the trip into a U.S. holiday? They quickly started looking at alternate plans, first thinking about spending the extra time in Marseilles, France, then flying through Europe to complete their trip.

The cruise company wanted to get to Europe, Al said, so they could figure things out there. He and Martha felt that they didn’t get accurate information from the company in those early stages of the trip and as the situation worsened and passengers on the boat started to show symptoms of the virus and get sick, the information became more clouded.

Two passengers that boarded in Puerto Rico got sick and one died. They saw four passengers taken off the boat when they got to Tenerife, Spain. Every time people left the boat, their attendees were in gowns, masks and gloves. The Bradburys ended up on their cruise ship for 15 days, isolating in their room — fortunately one with some space and a balcony — for five consecutive days while the virus spread through passengers.

“On the cruise, the first four days were fine, up until Puerto Rico,” Martha said.

“After Puerto Rico and March 8, the entire cruise and all of the discussion amongst the passengers, the crew was all about COVID-19. That’s all that anyone was focused on. We were getting information from the media that the ship wasn’t sharing with us. They were telling half-truths if they said anything at all.

“Two days after we dropped the two sick passengers off in Puerto Rico, they closed down all of the free entertainment and activities, but the shops were still open, the spa was still open, the bar, the casino. Anything that made the ship money was still open. For a full week after they took someone off that was presumed to have COVID-19, we were still mingling and not doing any type of physical distancing.”

While they were on the boat, countries began to quickly shutter their borders, ordering citizens to stay home. When they arrived in Marseilles, they had numerous contingency plans. In France, they had an offer through the CFL’s associate VP of officiating, Darren Hackwood, to stay with his in-laws. In London, they’d have somewhere to stay through Martha’s work (she’s a business analyst for Diageo, a British-based alcohol beverage company). If they could get to Ireland they had family to stay with there.

All of those plans went out the window with a call on the evening of March 18, informing them that they had a plane to catch and that they had all of 10 minutes to be packed and ready to get off of the boat.

“We didn’t ask a lot of questions once they told us we could get off,” Al said. “We knew that if we didn’t get off the ship when we did, I think we would have been on it for another 10 to 15 days.”

It wasn’t a simple trip home. Al and Martha were two of 77 Canadians on a Boeing 787 that was full of Americans, carrying around 300 people. Hours after they rushed off of the boat, they were seated on the plane and found out they were flying to Atlanta. The flight was fairly full and while Al and Martha were able to sit together, the physical distancing from other passengers wasn’t great. Still, they were on a path to getting home and took solace in that. After 15 days on the boat, they were still symptom-free but the virus remained all around them.

“We found out after we left, pretty much while we were in the air, that three people that were tested on the ship had tested positive (for the virus),” Martha said. “The test results came back while we were flying and they were on the plane with us. Three Americans.”

“I think they’re up around 40 people from the flight that have tested positive,” Al said.

“And at least two have passed away,” Martha added.

Ten hours after takeoff, the plane landed in Atlanta and presumably while the airport figured out what to do with these high-risk passengers, they sat and waited another four hours. They were eventually de-boarded and processed in a separate hangar. There were still two flights ahead of them — a connection in Minneapolis and their arrival in Winnipeg — but they made it home minutes before the Canada-U.S. border was closed for non-essential travel on March 20.

“We felt we got on the plane healthy and symptom-free,” Al said.

“But we felt for sure, no matter how we were going home that once we got home we were probably going to contract it. But we’d be back in Canada to convalesce.” 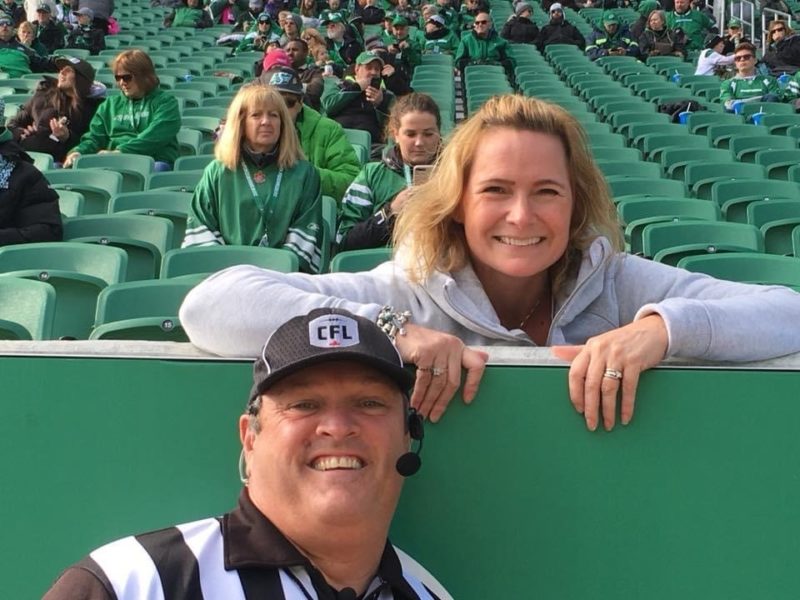 Al Bradbury and his wife Martha pose for a picture ahead of a game in Saskatchewan (Photo: Al Bradbury)

They were right. Three days after they got home to Winnipeg, Al began to show symptoms of the virus. They thought back to what they called their “virus footprint” and were at least happy that they’d cleaned everything they’d touched on their flight and that they kept their distance from other travelers on those connecting flights to get home.

They disclosed their exposure to the virus at customs when they arrived in Canada and had a vehicle dropped for them by family at the Winnipeg airport. Their son, Justin, who’s also a police officer and a football ref in Winnipeg, dropped groceries to them. They’ve stayed inside their home for over three weeks. Al can now take walks and had arranged a curbside pickup of groceries, but isn’t planning on doing more than that. Martha remains indoors until April 14, based off of when her symptoms first surfaced.

The scary takeaway from their eventual battle with the virus was that their symptoms were atypical.

“Our first symptoms were very much different than the natural symptoms that they ask you to look for first,” Al said.

“Everybody’s always looking for the cough and the fever. Mine were a sinus issue and really bad, bad body aches and a headache. That’s in the list but down lower.”

“Mine were headaches, body aches and nausea,” Martha said.

They traveled with a friend on the same trip. He’s in the ICU at a Winnipeg hospital and also dealt with atypical symptoms. He was nauseous and had stomach issues and had actually tested negative for the virus before his fever eventually spiked. His second test came back positive. He’s currently on oxygen as he tries to recover.

“Neither of us ever had a fever over 38 degrees and we never had a cough, we never had any respiratory issues,” Martha said. “We were tested because we traveled with someone that was a presumptive positive at that time and because we had been so heavily exposed.”

Of the two of them, only Al’s test came back positive, they said.

Looking at them through the Zoom call, they both seem fully healthy now. Martha feels strong again and Al is fine, except that his sense of taste and smell are still missing. They want to stress how important staying at home and physical distancing are.

“People have to understand that two-fold, you might not think you’re sick but you are, so you can be running around giving it to people. How you’re feeling doesn’t mean the next person will feel that way,” Al said.

“The way I had the virus go through my body is way different than Martha’s. Then it’s the percentage that we have to worry about, it’s the (mentality of) protecting the herd, for the people that it’s going to be respiratory and turn into pneumonia. Just because we got the lucky ability for our bodies to take it in one way doesn’t mean it’s going to be that way for the next.”

While they’re at home, they think about the future. They’re already re-bucket-listing trips, with Greece at the top of a long list. Martha is a longtime basketball ref that had started reffing football in the last few years. Her and Al have worked games together and their other bucket list item is to have the three of them, her, Al and Justin, all work a game together. It almost happened last year, she said, but she had to go work a basketball camp. They want it to happen soon, but they know that stopping the spread of this virus has to happen first.

They make jokes about being inside together for three weeks and admit that it’s been hard, but it had to be done. They’re doing their part and they want everyone out there to do theirs, too.

“We just want people to realize that, yeah, it’s not easy but it’s the right thing to do because you could be sick and not even know it,” Martha said. Al jumped in to continue the thought.

“If you want to get outside, you’ve got to stay inside.”