Every year I love writing these comparison articles because they allow me to look back through past evaluations and draft predictions to see how close or off my gut feeling mixed with some hard data was in hindsight.

This year — like almost everything — has been made more difficult, as we don’t have 2020 CFL Combine numbers to process and add into the evaluation. Some schools and players have supplied testing information but outside of the standardized combine measurements they will naturally be interpreted differently than the usual setup.

With that said, this year’s comparisons are based much more on game film and belief in the eye test than a number directly matching prospects from this year to those who worked their way through a similar experience years ago. 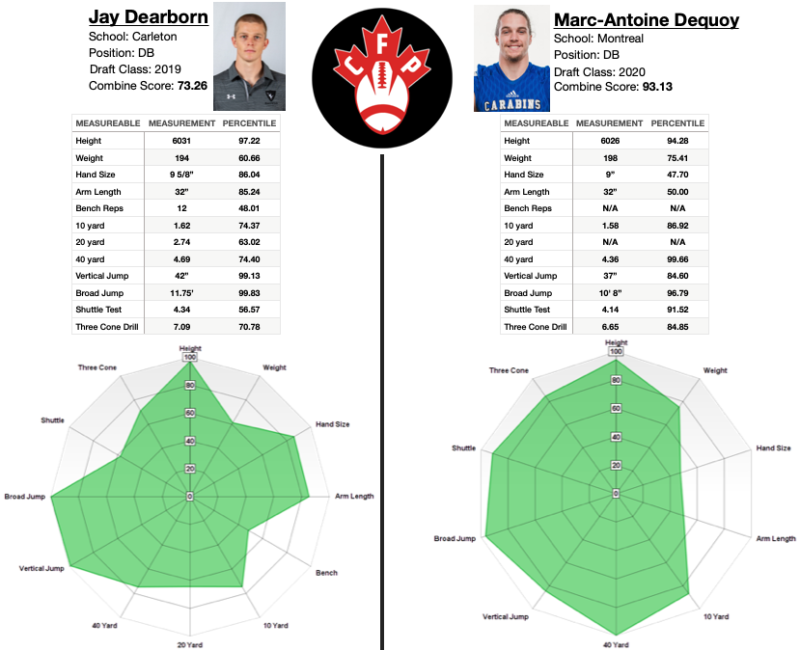 Dequoy is a more refined defender, especially in man-to-man coverage but his range, speed, length and inevitable influence on special teams drew this comparison to Dearborn, who advanced through the 2019 regional combines on sheer athleticism alone before being a late round selection of the Saskatchewan Roughriders.

Deqouy has Dearborn’s body in a more compact movement package and better natural ability to feel the flow of a play quickly after the snap. Dearborn has turned into a very nice special teams contributor for the Riders, but Dequoy has the potential to do even more.

Smart, efficient decision-making and a comparable six-foot-three, 230-pound frame is what drew me to this comparison. Cassar has crept his way up in each of the three scouting bureau rankings and should make any team smart enough to select him very happy, as Phillips did for the Stampeders on special teams after they took him in the first round of the 2007 draft.

Will Cassar be a priority selection? No, but his impact on the field come game day could be similar to Phillips in the CFL.

At six-feet tall and 185 pounds, Ternowski has good, but not eye-popping size. He consistently beat OUA defenders with his natural burst and smooth acceleration that often caught defensive backs on their heels.

His route running and variation in approaches will only get better with further coaching and time spent on the craft as a full-time job. Ternowski’s production and natural playmaking ability, including tracking the ball and being unafraid to make a big catch in traffic reminded my eye of Gardner, who was arguably the OUA’s best receiver in the late 2000’s before being drafted in the 4th round to the Argos in 2011.

I know, I know, Gittens Jr. has only been in the CFL for a year and had limited playing time mainly contributing on special teams and in a throwaway week 21 game. Still, I believe his ceiling is much higher than that, similar to Pinto.

Both have an impressive physical build, willingness to get involved in the run or receiver screen blocking game and quick feet of the line, but what drew this comparison for me was the similarities in their effectiveness after the catch. Pinto’s UBC tape features a variety of route running approaches but once the ball in his hand it’s always the same: Fast and elusive, with eyes on the end zone.

Both were viewed as the top U SPORTS prospect through much of the draft process.

Both have a thick lower body build with excellent movement skills and an athleticism uncommon to athletes their size.

Both would make their hometown teams very happy to select them in the first round.

Make that ‘did’ make their hometown team happy to select the in the first round for Gray, who returned north of the border to help Winnipeg with the 2019 Grey Cup after spending some time in the NFL.

O’Donnell should get a similar opportunity. A top pick to the Stampeders or shortly afterward to the Eskimos is not out of the question for this unique prospect, whose raw ability when refined should create one of the more consistent and dominant Canadian blockers in the CFL over the next five years.