The last time one of my pieces appeared here was back on March 3. That was nearly two months ago and it feels like a year.

I wrote a passionate defence of the rouge and why it must never leave the CFL. A little over a week later, Rudy Gobert and Tom Hanks tested positive for coronavirus and sports came to a halt. Without any actual sporting events going on, we all have had to make due with memories of great moments from sporting past. TSN has been doing their part running back-to-back classic CFL games every Friday night, with each coupling based on a specific theme.

This past Friday it was Anthony Calvillo night and one the games they aired goes on the short list of the best regular-season games in memory: the 2010 season opener. It was a Grey Cup rematch between Montreal and Saskatchewan. It’s hard to beat a 54-51 OT contest with over 1,100 total yards of offence. It was a real treat to push aside so many of the sobering realities we are all dealing with and just sink into such an exciting game.

There’s been a lot of justifiable ink spilled about all things Calvillo as a result of TSN’s choice of programming. So I thought I would go the other way and comb through this game and highlight as many wondrous moments and other curious football moments. 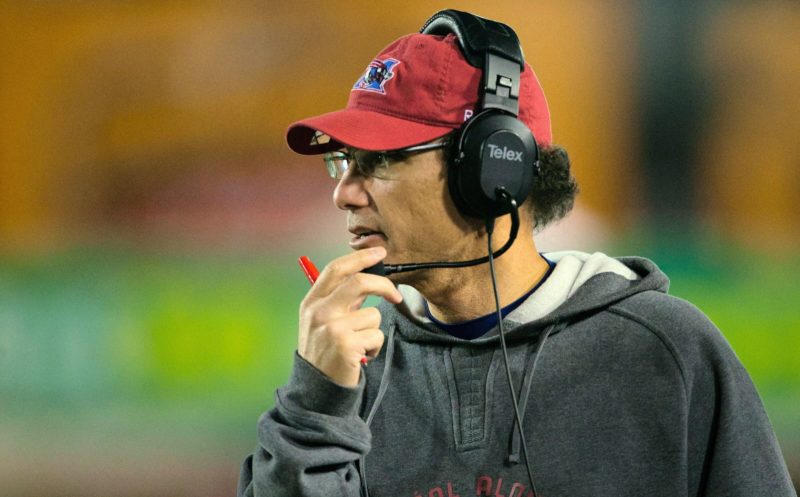 The throwback game felt like a high school reunion of sorts, with familiar faces all over the field saying hello again (Photo: CFL.ca)

Watching a classic game from a decade ago is the equivalent of going back to your high school reunion if you really enjoyed your school days. Everywhere you turn you see people you haven’t seen in ages and you are immediately excited to see them.

Hey look, Anwar Stewart is still on the Alouettes’ defensive line; Avon Cobourne is running hard; Keith Shologan is always in position and who knew that John Bowman would still be getting it done with Montreal nine years after this game was played! But it’s not just the players that caught my attention. Wow, what a crazy journey has it been for Marc Trestman! Seeing him on the sidelines in the middle of his successful tenure as the Als’ head coach, I don’t know if anyone would have guessed he would go on to be the head coach of the Chicago Bears for two years, run the Baltimore Ravens offence, resurrect the Argonauts upon his return, then get fired the next year and now is one of many people out a considerable amount of money due to the failed XFL.

Right next to Trestman is offensive coordinator Scott Milanovich. Two years later he also would win a Grey Cup as the Argonauts head coach and several years later he would find himself with the Jacksonville Jaguars. Now he’s back in the CFL with Edmonton.

Early on you are treated to a rare slice of honesty from both coach Ken Miller and Darian Durant. Remember the backdrop of this contest is that the last time these teams met, Montreal won the Grey Cup as a result of 13 men on the field on that missed Alouettes field goal.

I don’t think I need to go into detail about those final seconds at McMahon Stadium. We all remember. Sideline reporter Sara Orlesky tells the viewers that Coach Miller admitted that it took months to watch the 2009 Grey and that he still has not watched it with commentary. His quarterback took the same approach. Durant did not watch that 28-27 Cup defeat until a week before the start of the season. Durant had spent the off-season breaking down every game from the 2009 regular season, spending up to a week per game. I can’t imagine a more difficult off-season than what the Roughriders went through leading up to this game. I wonder how many players and coaches are still haunted by it to this day?

Hey it’s the Canadian Air Force! The quartet of Canadians Andy Fantuz, Rob Bagg, Chris Getzlaf and Jason Clermont didn’t play all together in Regina for that long but it was fun while it lasted. On this day Fantuz, Bagg and Getzlaf would combine for 266 yards and three touchdowns. Their Montreal counterparts consisted of an embarrassment of riches in the form of Kerry Watkins (five straight 1,000 yard seasons coming into 2010), peak of his powers Jamal Richardson and Hall of Famer Ben Cahoon. However what makes re-watching CFL classics like this so special is getting to see the beginning of greatness. Which brings me to S.J. Green.

In 2009, Green was just a bit part in Anthony Calvillo’s aerial circus. That would change in 2010 and it would change forever starting on this day. Green would finish with two touchdowns, including a 48-yarder early in the game. But his “Welcome to the CFL” moment came on a two-point conversion that you will see to this day whenever you encounter a list of the Top-10 all-time CFL catches.

Fast forward to overtime and Montreal is going for the two-point conversion, trailing 48-46 when Calvillo overthrows on the play. Green has to stretch out for an impossible catch. For a split second the game is over then you realize that this human did something humans really can’t do. You hear Chris Cuthbert bellow out, “How did he catch that?” Just like that the game is tied and a legend is born that is still cranking out 1,000 yard seasons nearly a decade later.

That’s enough waxing poetic. Let’s take a look at some of the novelty moments that can be mined from this game. There was plenty of hype for rookie Roughriders defensive end Brent Hawkins, who had played 20 games in the NFL. The broadcast focused on him early on as being the next young star. It would never come to be, as injuries and inconsistency claimed him as Hawkins appeared in just 27 games.

Here is how long ago this game was. A TSN board comes up on the screen showing who is no longer on Montreal’s roster and wouldn’t you know it, there is our very own Davis Sanchez. (You can find him here), Remember the O.J. Santiago era? The Whitby, Ont. native had some memorable moments in the NFL (Everyone do the “Dirty Bird!”) and was now on the Alouettes roster to start the year. Cuthbert and Glen Suitor hinted that we may start seeing him play in the next week or two. An injured hamstring made sure the Dirty Bird never saw the light of day at Percival Molson Stadium or anywhere else in the CFL. 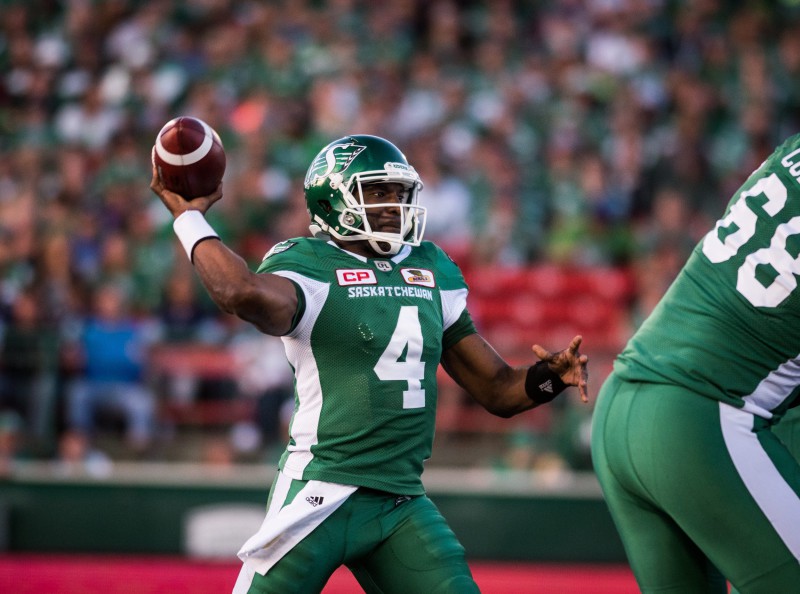 Darian Durant put together a monstrous effort in the Riders’ OT win against the Alouettes (Matt Smith/CFL.ca)

The funniest moment goes to a third quarter interview between Orlesky and Ryan Getzlaf, who was on hand to root for his brother. During their sideline conversation, Saskatchewan’s Prechae Rodriguez collects a 45-yard touchdown pass in mid conversation leading to Getzlaf to spontaneously burst out “We just got a touchdown, so we’re excited.”

My most football-nerdy moment goes to right after a Jamel Richardson drop (his second of the game). Glen Suitor mentions that TSN will start tracking drops from receivers and how it impacts the quarterback’s passing numbers. Somewhere a very young Derek Taylor is nodding in approval. Somewhere else an even younger Marshall Ferguson is also excited not knowing that years later he will be charting intermediate throw completion percentages.

There are so many former stars I could focus on. You had Wes Cates ripping up Montreal thanks to gaping holes provided by Gene Makowsky. You had Chip Cox making big play after big play. But I want to close out by mentioning the other quarterback on the field that day.

Durant outplayed Calvillo, throwing for nearly 500 yards with five touchdowns while adding another 52 yards and a sixth touchdown on the ground. It was a treat to watch the best version of Durant. He was a fearless passer that was constantly looking downfield for the big play. He helped bring his team back from a third quarter 33-12 deficit by keeping plays alive with his feet and dropping perfect deep passes right into the arms of his fleet of Canadian content pass catchers and of course Weston Dressler.

It’s weird to wonder just how great a career Durant could have had considering he was a multiple time All-Star, quarterbacked his team to a Grey Cup win and threw for over 30,000 yards. That is the resume of an outstanding player, but watching him in Week 1 of the 2010 season is a painful reminder that injuries cut short a career that could have hit even higher heights.

With no live sports happening at the moment, games like this one are just what we need. They give us a brief moment of normalcy and fill us with nostalgia for a time when so many CFL greats were all on the field doing battle, one side wanting to prove their 2009 Grey Cup win was no fluke, while the others were doing whatever they could to push those painful memories away. I’m looking forward to next Friday.