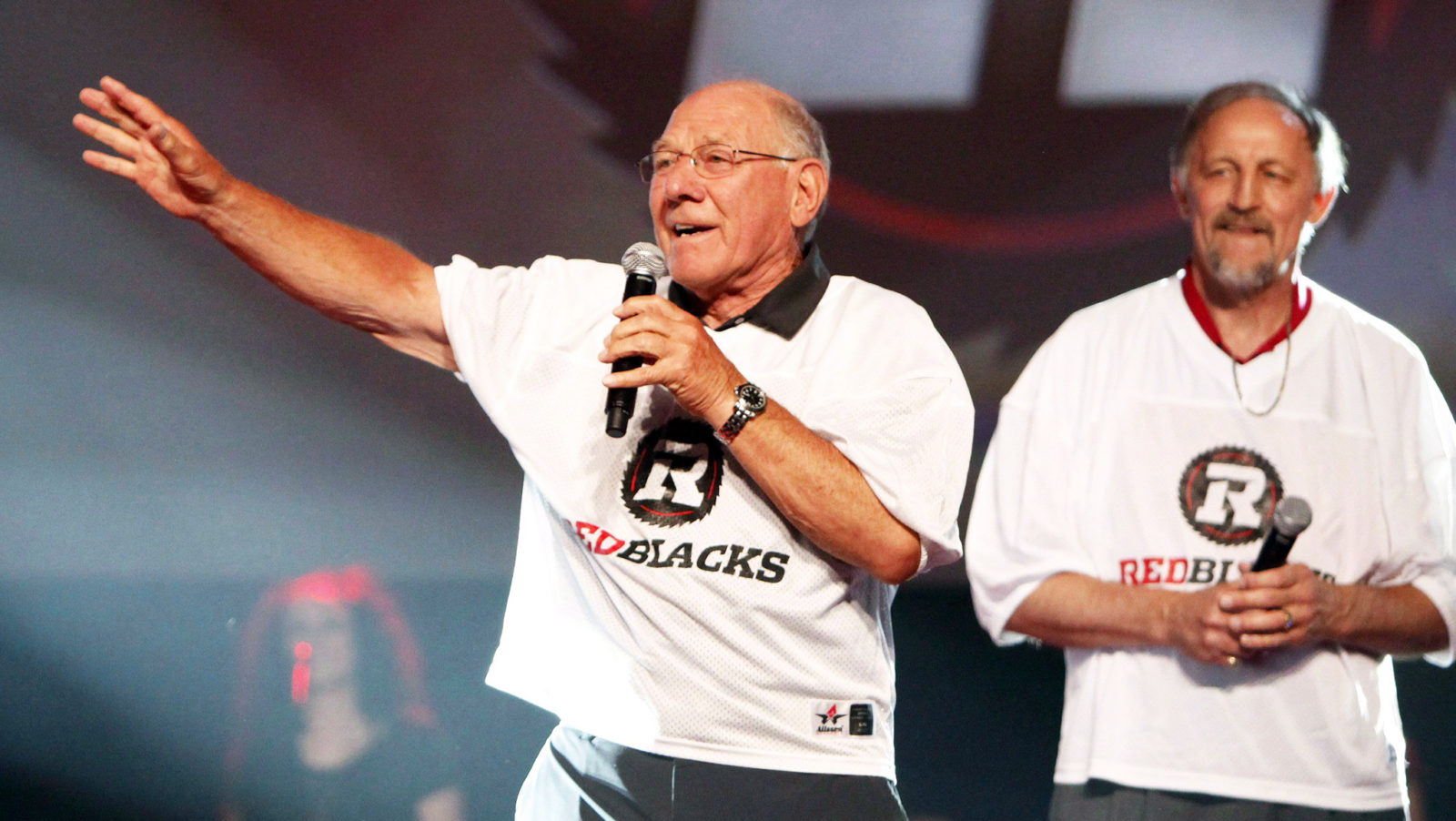 Tears in his eyes, family on his mind and Canadian football forever entrenched in his heart.

This is the story about the greatest day in my career to date: A day with Russ Jackson.

The name Russ Jackson carries weight with it even for the casual fan. Like so many names of the past if we hear them enough we assume their greatness without ever truly understanding it.

I was incredibly fortunate to be given a role at TSN covering the Hamilton Tiger-Cats and CFL-at-large almost immediately after finishing my playing days which was – in hindsight – a double edged sword.

I immediately began doing what I love, bringing people closer to the Canadian game , a position that has afforded me so many opportunities, but in covering the modern CFL each day I never had the chance to go back in time and learn what names such as Etcheverry, Parker, or Jackson really meant to me.

When the pandemic began I set out to fill what I quietly felt was a shameful lack of understanding for the CFL’s original heroes by watching every televised Grey Cup ever. I watched Bernie Faloney’s early days in Edmonton, Joe Zuger’s first Grey Cup start, Normie Kwong’s relentless work ethic running between the tackles and so much more but one name was, is and always will be king amongst them in my mind.

I first learned about Russ from my dad who upon my acceptance to McMaster University proudly acknowledged with a wry smile of realization, “you’re going to play quarterback in the same place Russ Jackson did”.

Occasionally I would see Russ around at games or alumni events, a man whose presence in any room lifts the quality and energy of all in attendance. I would slide into a picture with him here and there feeling a strange mixture of spoiled and unworthy for the opportunity.

Every time Russ would make me feel welcome and valued, he has that affect on everyone he comes in contact with. It’s not a trick or a show, it’s just who he is. That enduring natural charisma stands the test of time even more that his jaw dropping stats or highlights.

It’s doesn’t take a math expert to understand that many of the names of 1950’s and 60’s CFL excellence are no longer with us. That fact is sad for fans of that era, but even more so for someone of my age looking to connect with the past and understand the roots of this great game.

I told myself months ago that I had one simple goal for Canada Day: Sit down with Russ Jackson to fully understand the man behind the Canada Post stamps, multiple awards and Canadian football Hall Of Fame bust.

Hamilton Spectator iconic scribe Steve Milton connected me with Russ’ contact information, I called Russ’ land line and left a voicemail which was returned within an hour. A refreshing throwback in itself to a simpler time before DMs and unanswered texts.

Thankfully Russ still lives just down the road from me in Burlington. I offered to come his way as a thanks for his availability. Russ quickly scrambled away from that idea as he did so many defenders more than fifty years ago, instead offering to play at my home turf, the TSN 1150 Hamilton studios as an act of appreciation for requesting the interview.

We set a date and time. Russ was there, as I expected fifteen minutes early.

We greeted at the door without a hug or a handshake, restricted to a simple nod of the head and thankful smile by the virus that surrounds our every decision currently.

Upstairs we went to sit down on camera for an X’s and O’s segment where I told Russ I’d show him some plays from his four Grey Cup appearances and get a quick thought on each.

With masks on the define the time we sat together I turned on the camera and footage.

I had six minutes of film prepared.

I turned the camera off 48 minutes later.

At 83-years-old Russ Jackson is as sharp, witty, respectful and entertaining as ever. Every clip evoked another story, an emotion, a name or place that sat vividly on his mind for the last half century.

That sit down alone was beyond my wildest expectations but Russ still had more stories to tell and wisdom to share, so we headed down the hallway to the studio and sat down to continue the crash course in a football life that in many ways defines CFL history.

Two hours later we turned off the microphones after discussing anything and everything from Russ finding out his son Kevin was born while he was flying home from a game, almost being drafted by BC, nearly being traded to Hamilton, getting followed by the RCMP unknowingly and more.

Towards the back end of the conversation I asked Russ about what it felt like to finally get his 1969 Grey Cup ring at last years 50th anniversary celebration of his final and – for many – most memorable crowning achievement.

“It was kinda neat you know, it’s the only Grey Cup ring I have of all the special things from other Grey Cups and special awards”.

Before Russ could continue I jumped in to ask where the symbols of excellence from 1960 and 1968 were?

It was an honest question that exposed just how much his family and the Canadian game mean to Russ Jackson.

“My grandkids have them”.

After a long pause Russ punctuated the emotion of the moment by saying, “they’re taken care of” before going on to describe how and why the ’69 rings came to be fifty years later than expected.

Russ Jackson has been many things in his lifetime. An elite student, transcendent quarterback, Canadian hero, teacher, principal, coach, icon and role model to countless numbers of people from all walks of life, but if there is only one word to describe Russ I believe it to be genuine.

He is as honest and available now just 27-days shy of his 84th birthday as he was in pre or postgame interviews during his athletic prime, including gritting his teeth to smile through questions and answers after the only Grey Cup loss of his career in 1966.

We wrapped our chat with some eye-opening stories regarding the treatment of black teammates in the 1960’s followed by some listener questions before heading to the hallway where I asked Russ to draw up his favourite play for me to be framed and hung in our studio to commemorate our time together.

Within seconds he drew the X’s and O’s of Margene Adkins 70-yard game winning touchdown catch from the 1968 Grey Cup. Receiver splits, route disciple and progression all labelled as if it had been photocopied from a 52-year-old Rough Riders playbook.

We headed down stairs as I opened doors and touched elevator buttons in hopes of minimizing my heroes exposure to anyone or anything that could possibly hurt him realizing my motive while doing so was that I wish Russ Jackson could live forever.

With a fist bump goodbye he departed. As I watched him drive away into the muggy Hamilton sun after three hours together, it struck me that Russ Jackson WILL live forever.

Why? Because every single one of us holds a piece of Russ in our CFL loving heart. Canada’s greatest quarterback has undoubtedly done better, more professional or extensive interviews sharing his life with big name personalities but no interview I have ever done affected me like this one because Russ has and continues to exemplify what it means to be a symbol of excellence few can compare to, and as a homegrown kid no less.

Put simply this Canada Day, Russ Jackson is a Canadian hero and deserves to forever be treated as such.