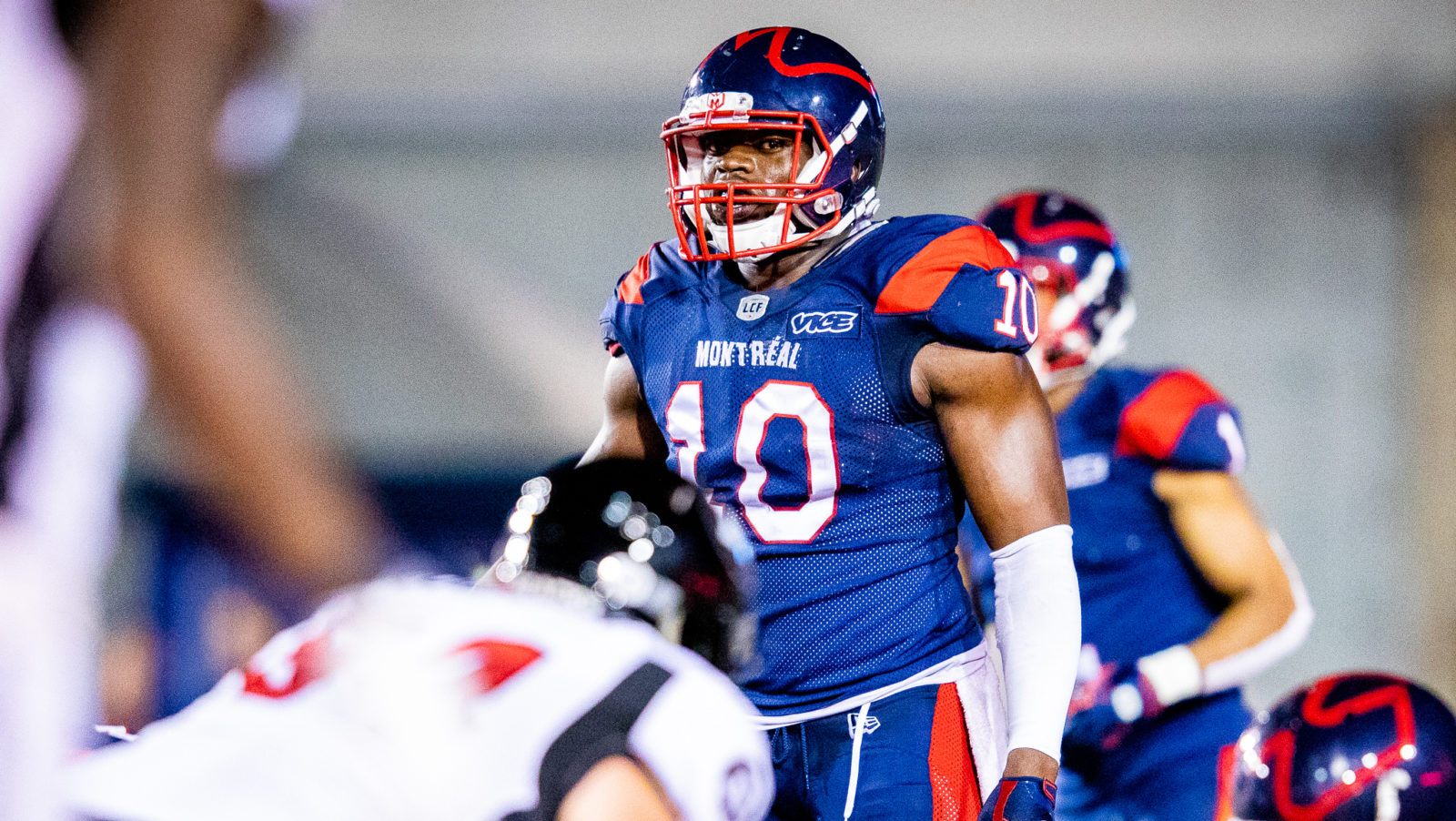 When he signed a new contract with the Montreal Alouettes in 2018, linebacker Henoc Muamba had one goal in mind for the franchise, who was in the middle of a difficult stretch.

“I remember sitting down with management, and then before I signed, I knew that we were not in the best situation, and while the city was well known, it was going through a rough time,” Muamba said to MontrealAlouettes.com. “But one of the commitments that I made to management was that I wanted to bring this city and this team back to its glory days. I remember specifically in my first or second year, when Anthony Calvillo was at the helm and they had all the guys that played in that era — obviously, John Bowman was there because he’s been around for 50 years.

“Back in those days, I remember coming in to play Montreal, and it was absolutely intimidating. It was one of those places that you didn’t want to go into. It fell off for a little bit, but boy, is it back.”

The Als made it back to the playoffs in 2019, and Muamba and defensive back Greg Reid were two of the pillars of the defence that got them there.

Heading into a possible 2020 campaign, the team and its players are looking for bigger and better, and with a new management team, head coach Khari Jones and Muamba and breakout star quarterback Vernon Adams Jr. leading the charge, there’s no reason to believe that the Als could be destined for big things both this year and beyond. 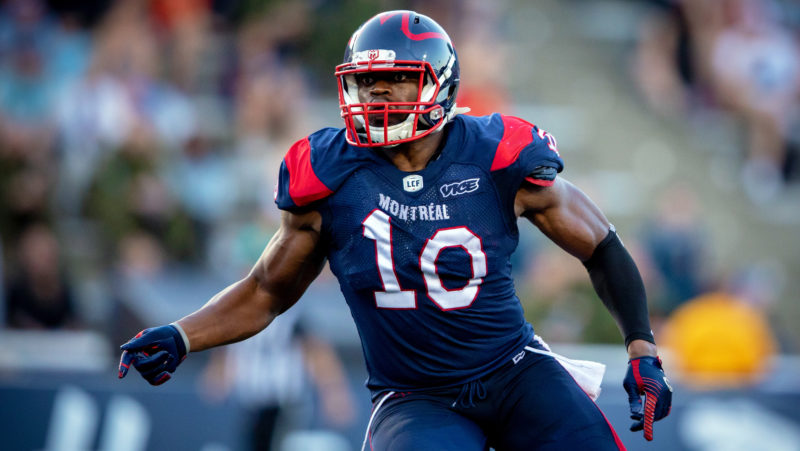 Heading into 2019, the Als had no shortage of aversity before and during their 2019 campaign. Off the hop, then-head coach Mike Sherman was relieved of his duties, starting quarterback Antonio Pipkin went down with an injury, and then, general manager of Kavis Reed was also relieved of his duties.

In stepped Jones as the new head coach and Adams as the starting pivot, and the rest is history.

While the offence was the unit that got the majority of the praise for the Als, their defence kept improving during the season and came up with some big plays during the year. They stood tall against the Toronto Argonauts during the Touchdown Atlantic game, bending but not breaking to stop a final-minute drive and come out with a win. In their thrilling victory against Winnipeg, veteran defensive end John Bowman also came up with a massive sack that got the Als the ball back with a chance to win the game — Vernon Adams and Jake Wieneke would hook up on the ensuing drive to seal the game for Montreal.

After being outside of the playoffs looking in for the previous four years, the Als made it back to the postseason, clinching the second seed in the East Division, earning themselves a home game to boot.

In that Eastern Semi-Final, it wasn’t the Als’ day, as the Edmonton Football Team came into Percival-Molson Memorial Stadium and had a big day on both sides of the ball. But despite the loss, there was an excitement in the air and Montreal was on the up and up.

“We really truly know that at some point during the game, we’re going to need the support of the fans,” Muamba said. “Last year with all of the comebacks that we made, a major part of it was because of the support from the fans. I remember specifically during night games, we’d be making a comeback and I’d look into the crowd and everyone was into the game, people had their phones out and the lights were flashing. It gives you chills and I had to sort of snap back and get back into the game.”

“I was actually watching that game last night,” Reid said regarding the Eastern Semi-Final. “I think in the third and fourth quarter, everyone was just standing up. It was crazy.”

Muamba is no stranger to being a defensive leader. Now an eight-year CFL veteran, the 31-year-old had another fantastic season with the Als in 2019, posting 93 tackles, a sack and two forced fumbles in 17 games while anchoring the second level of the defence.

The National linebacker was named an East Division All-Star for the second consecutive year and also earned CFL All-Star honours for the first time since 2013. Muamba was also nominated for the Most Outstanding Canadian honours at the 2019 Shaw CFL Awards, and he was the man to take home the honour, beating out Saskatchewan’s Cameron Judge.

“Without the help of my teammates, I wouldn’t be the player that I am today,” Muamba said. “I wouldn’t have received the award that I did receive. It’s an honour to receive the individual accolades at the end of the season, but at the end of the day, we have a great group of guys in our locker room.

“I’ve been so proud of Greg and the things that he’s experienced since he came onto the team. Being a leader, you kind of always look around and watch for those guys that are hungry and really want to reach the level of greatness. …One of the things that I was told is that you want to be seen more than heard. And that’s what Greg Reid did.”

Reid joined the Als in 2018 along with Muamba, and after a season of playing in a complementary role, he was thrust into a position to start for 2019.

The Valdosta, Georgia native was a problem for opposing offences in several different areas. He finished the year with 71 tackles, three special teams tackles, two sacks, three interceptions and a forced fumble while appearing in all 18 regular-season games.

For his efforts, the 29-year-old earned his first East Division and CFL All-Star honours in his first season as a full-time starter.

“I knew that once I was able to get on the field, I’d be able to show my talent here,” Reid said. “In 2018, I was just watching and seeing the leaders that we had on this team and I was just surprised that the record was what it was. I just felt the energy and that 2019 was going to be a great season just by seeing the leadership in the locker room.

“I had already put in my mindset to be ready and to have people like Bowman and Henoc believe in me. …I just wanted them to kind of depend on me in 2019.”

This off-season, there was some turnover when it came to the roster — something that every front office and players have become accustomed to when it comes to the ever-changing landscape in the CFL.

Danny Maciocia was brought in as the organization’s new general manager and Mario Cecchini joined alongside him as president. With a new look in the front office and the team’s ability on the field, things are looking up in Montreal heading into 2020. 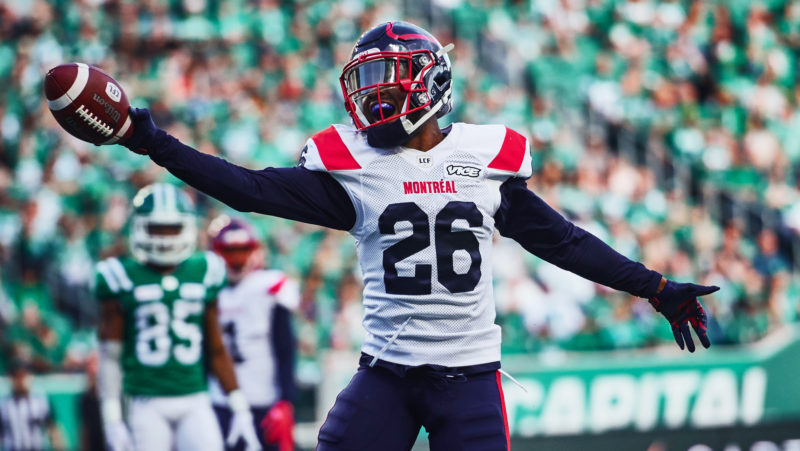 Maciocia made it a point to bring in talent in free agency, both with products from Quebec and abroad. The biggest additions came in the secondary and on the defensive line. Monshadrik Hunter and Tyquwan Glass have both come over from the Edmonton Football Team, and Adrian Tracy will be a boost in the trenches after a productive campaign with Hamilton in 2019.

Defensive linemen Junior Luke, linebackers Alexandre Gagne and Frederic Chagnon and defensive back Kevin Fogg also headlined the off-season acquisitions on the defensive side of the ball. Ciante Evans was also re-signed, helping to bring back one of the secondary’s key contributors, however, Tommie Campbell and Bo Lokombo will both be plying their respective crafts with the Argonauts. The former signed with the Double Blue while the latter was acquired by Toronto for a draft pick.

Muamba and Reid will be relied on to lead in their respective positional rooms. The shortened season will provide challenges, with the main one being that team’s won’t have a long runway to get their feet under them before the playoffs roll around.

Teams in the East did re-tool and they’ll be looking to prove that they can make runs similar to Montreal’s in 2019. But make no mistake, these Alouettes are still dangerous and if they come out firing in 2020, they’ll be a problem for opposing teams.