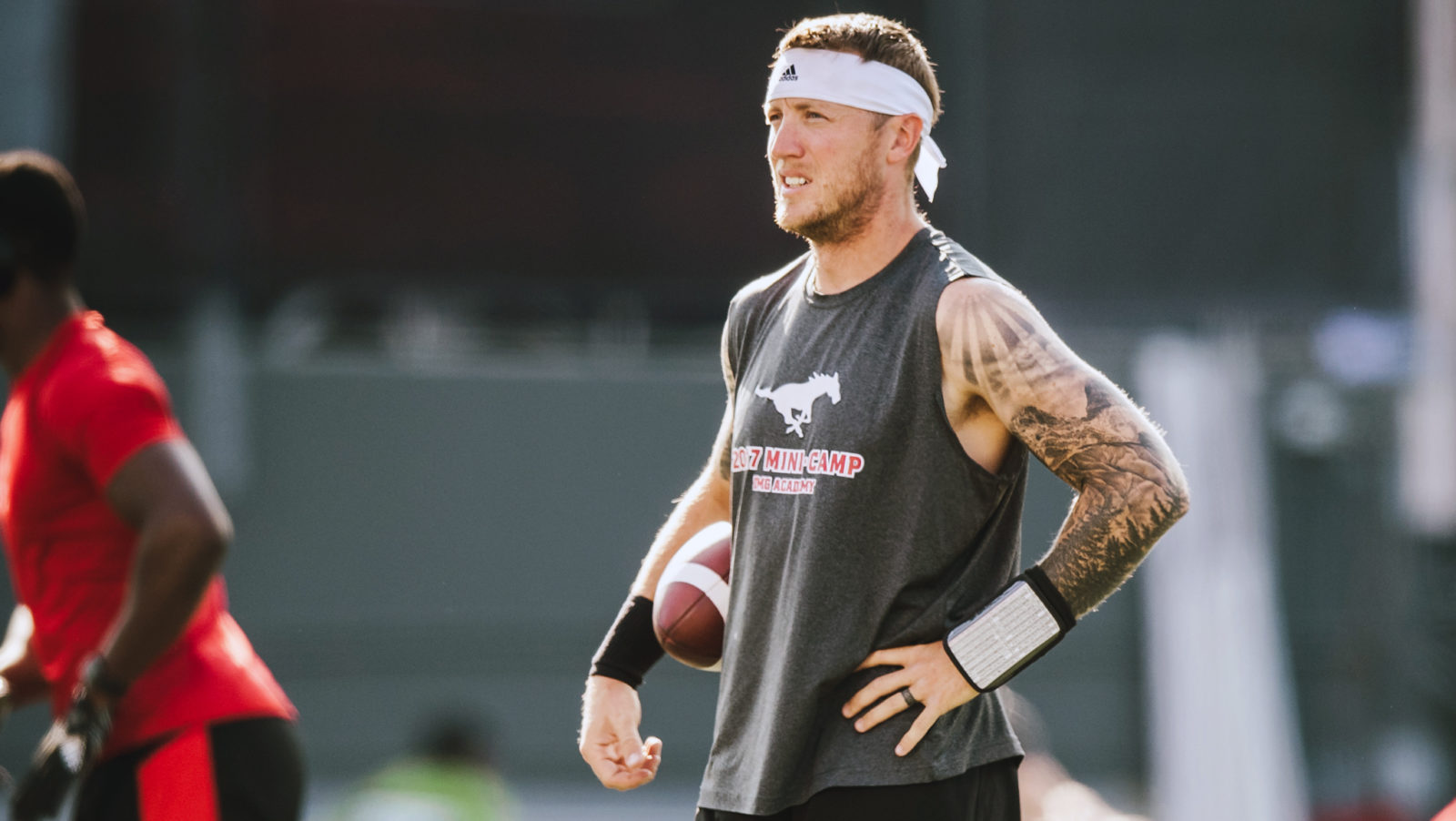 Aside from the few who have caught on with NFL teams and practice rosters, most CFL players have had to get creative to pass the time. For some, this missed season has been a great opportunity to rest and recover. Others have been hitting the gym hard in preparation for 2021. For two-time Most Outstanding Player Bo Levi Mitchell, it has has been an opportunity to start looking ahead to his next career.

The Stampeders’ quarterback used the first chunk of the CFL’s pause to get his body back to 100 per cent after off-season shoulder surgery. Over the last couple months, though, Mitchell’s focus has turned to his desired career path whenever his playing career ends: coaching.

Mitchell has been working regularly on his own with high school quarterbacks the last number of weeks and starting next month, is tackling another big project. Along with a number of Calgary teammates, Mitchell runs Ignite Football Academy, which kicks into high gear in November with a two-month program for high school players at every position.

“It’s fun to get back to it,” Mitchell told me last week. “For being something that I want to do whenever I’m done, you know coaching football; it’s such a good way to learn where are my strengths and weaknesses. Am I able to get the potential out of a kid that I see that maybe he’s not getting out right now? I feel like that’s what a lot of the dads and moms have asked me: I know my kid has a great arm but it doesn’t translate to the field.

“I think that’s probably where my biggest asset comes from is teaching these kids what’s between the ears and how to read defences and how to…navigate a football game to win instead of just going out there and throwing a pretty spiral. It’s exciting for me, it’s fun, I enjoy it, I know the kids have enjoyed it so far.”

RELATED
» Campbell on Lions’ front office: ‘We have a lot of pieces of the puzzle in place’
» Catch up on the first six episodes of CFL Remote Reunion, driven by Kubota
» Stamps look back 75 years to franchise’s beginning 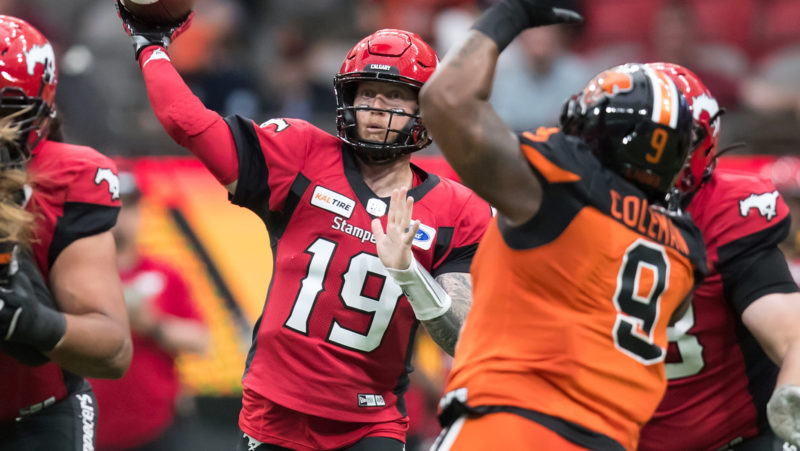 When his playing days are done, Mitchell could follow in Dave Dickenson’s footsteps and go from playing for the Stamps to joining the coaching staff (The Canadian Press)

Mitchell has made no secret about his desire to step into coaching following his playing career. If it ends with the Stamps, you can see a nice fit. Current head coach Dave Dickenson jumped into coaching when his playing career ended with Calgary in 2008. He joined the team’s coaching staff the following season and has been there ever since. And if that’s not how things play out, Mitchell has talked about returning to his home state of Texas and rising the ranks there.

Of course, at 30, Mitchell likely has a decade or so until he has to start making those types of decisions. For now, though, Mitchell has the opportunity to get regular coaching reps in, which will only help him to identify his strengths as a coach. And, or course, his weaknesses.

“Honestly, I probably yell a little bit too much,” Mitchell chuckled when I chatted with him. “And sometimes, you know…sometimes the cuss words come out every now and then. I always warn the parents ahead of time, make sure they’re OK with it. I’m definitely learning, I’m always learning when it comes to coaching, so it has definitely been a process and a fun one at that.”

Mitchell is among a number of high profile players who have the chance to return in 2021 healthier, stronger and better than ever. Mitchell has battled injuries the last couple years and has played through shoulder issues, which should be behind him by next spring. Count him in a similar boat with guys like Jeremiah Masoli, Matt Nichols, Mike Reilly, and Trevor Harris.

As it stands now, we don’t know exactly what the next CFL season is going to look like. While it was unfortunate the 2020 season had to be cancelled in the midst of a worldwide pandemic, the upside is it has given the league ample time to plan for a number of scenarios. Mitchell is among many in the league feeling good about the prospects for next season.

“Talking to Dave (Dickenson), we both feel positive about what’s going to happen,” Mitchell said. “Dave feels positive after talking to a lot of people. He thinks everything is going to happen, you know, we all do, but…it’s still an unknown and these are just words between two guys that love football. We all want it come back, we hope it comes back, we all plan for it to come back, so that’s kind of the mindset right now.”

In the meantime, Mitchell is one of the frontrunners at quarterback for the first ever CFL All-Decade Team presented by Leo Vegas. With his two Grey Cups rings, four appearances and two MOP wins, Mitchell knows he has a good chance to get the nod. But he’s OK if the honour goes to one of the other very deserving pivots in the mix.

“Outside of Calgary I might not be the most fan-favourite person, so, even if I don’t it’s cool,” he said.

“There have been a lot of great quarterbacks over the years and especially the last 10 years. It has been a blessing to play behind some of these guys, with some of these guys and leading the charge at some times. Whoever gets it will deserve it for sure.

“The biggest one was knowing that Ricky Ray came out and said something. He’s a guy that doesn’t speak out very often and is definitely one of the best to ever do it. That was enough of a compliment in and of itself. So even if I don’t get the All-Decade, that’s cool with me because having Ricky Ray’s respect or over the last decade has been pretty cool.”

Clemson receiver Ajou Ajou is speaking to Canadian reporters today, which should be fun. The Brooks, Alberta product didn’t feature in a 47-21 win over Syracuse for the number one Tigers on Saturday, but he did haul in his first NCAA touchdown the weekend prior in a 73-7 rout at Georgia Tech.

“He’s going to be an unbelievable player,” says Clemson head coach Dabo Swinney. “He’s this uber-talented guy, but he knows that he has so much to learn and he’s not afraid of that. He’s not embarrassed by that, he’s not too cool for school. He is a very unique guy, I’ve never really had a guy like Ajou.”

Also on the Canadian front this weekend was a couple of Alberta products helping Oklahoma State stay perfect at 4-0. Sherwood Park’s Chuba Hubbard ran for 139 yards and a touchdown, while Calgary’s Amen Ogbongbemiga finished with a pair of tackles at linebacker.

And we saw a pair of Ontario receivers go head-to-head in an SEC showdown. Alabama’s John Metchie III went for 151 yards, while his Brampton contemporary Josh Palmer finished with 57 yards and a touchdown. Ultimately, the Crimson Tide won the day and moved to 5-0 with a 48-17 win over the Vols.

Finally, on the professional side, Scarborough’s TeVaughn Campbell notched his first forced fumble for the Los Angeles Chargers as they took a 39-29 win over Jacksonville. And defensive lineman David Onyemata looked good, racking up a tackle and a couple assists to help New Orleans to a 27-24 win over Carolina.