Catching On: Receivers could benefit from change of scenery 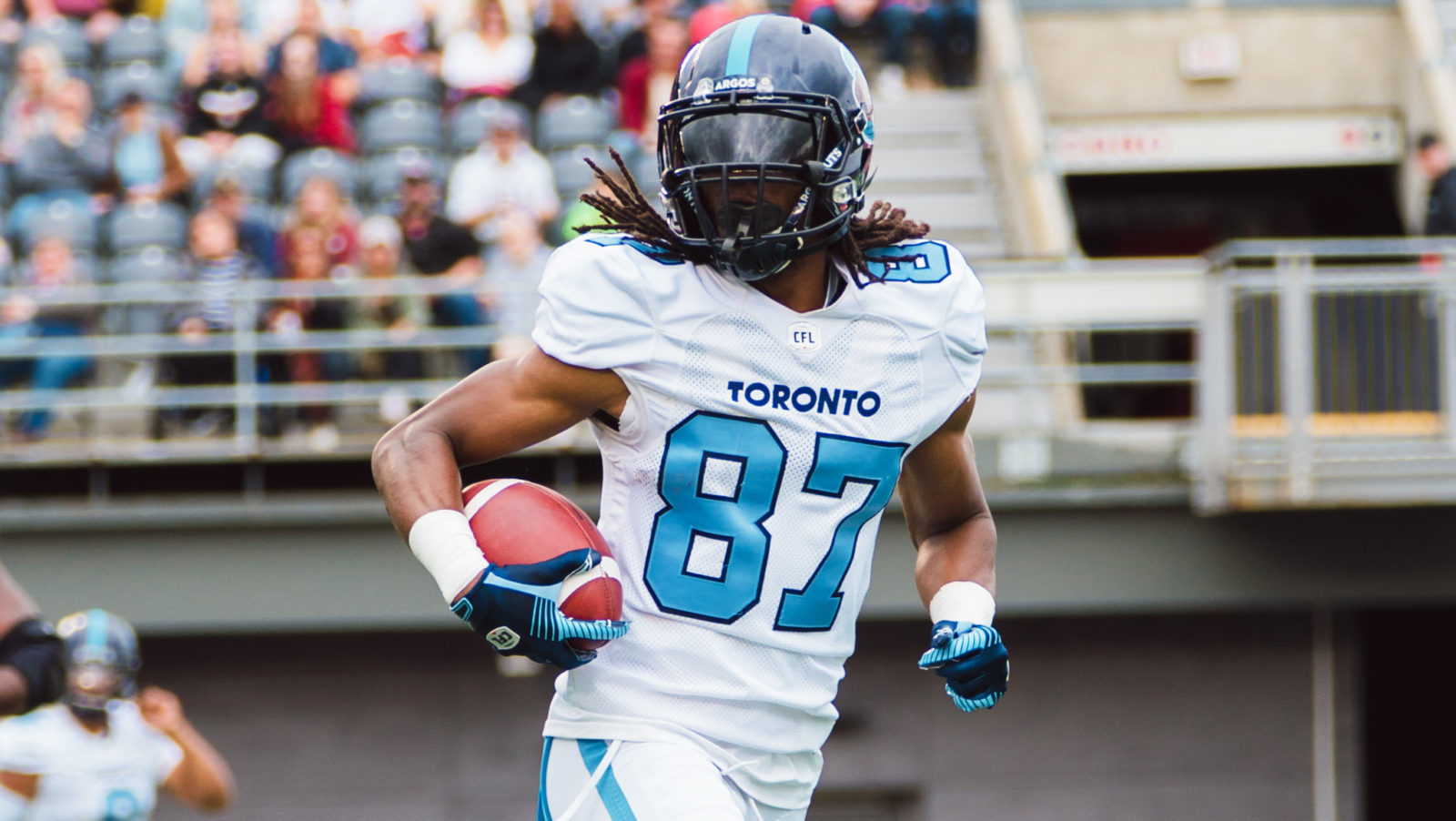 Catching On: Receivers could benefit from change of scenery

After an off-season that has gone on long enough, there are plenty of difference-makers across the CFL that will suit up someplace new in 2021.

Especially at receiver, where Derel Walker, Eric Rogers, and Bryant Mitchell headline an impressive list of proven, game-changing pass-catchers sure to bring immediate results to their new offences.

South of the border, Stefon Diggs just led the NFL in receiving yards his first year in Buffalo, while three of the NFL’s top four receiving leaders were not with their team prior to 2020.

Not particularly unheard of in Canada, either. In 2017, S.J. Green hit a career-high in yards (1,462) and led the CFL East Division in receiving yards, helping the Argos capture the 105th Grey Cup following a long tenure with Montreal.

Two years prior, Chris Williams starred in a revamped REDBLACKS offence (led by a 40-year old Most Outstanding Player winner in Henry Burris), helping Ottawa go from from 3-15 to appearing in the Grey Cup within a year.

In 2019, Greg Ellingson, Ricky Collins and Derel Walker all posted 1,000-plus yard campaigns in their first season wearing new logos. 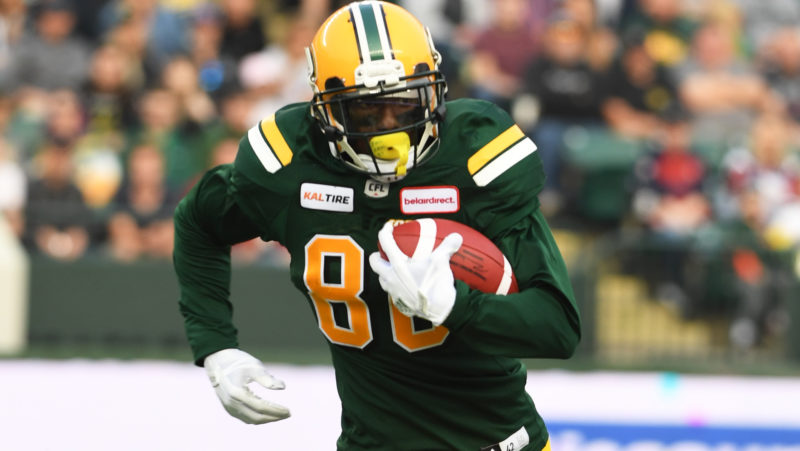 It turns out there is no such thing as a customary waiting period for free agents to make an impact. Who are some of the new receivers in different places to watch?

In BC, Dominique Rhymes has the chance to become a true complement to Bryan Burnham. Rhymes, a 6-foot-4, 215-pound Miami native, broke out his last season in Ottawa with 1,056 yards and five touchdowns, despite being on an offence that ranked near the bottom of the league in most major categories.

Rhymes’ biggest impact may come vertically, an obvious sore spot for the Lions in 2019. Star quarterback signing Mike Reilly ranked second in the CFL with 88 passing attempts of 20-plus yards, but had the worst quarterback rating (76.1) of any starter on such attempts.

While departed receiver Duron Carter struggled on downfield passing attempts (he caught just 5 of 22 attempts, an efficiency mark of 22.7%, along with only one catch of 30+ yards), Rhymes thrived on the deep ball with Ottawa, converting 13 of his 37 opportunities (35.1%) including 10 catches of 30-plus yards (15.4% of his receptions).

Rhymes ranked fifth in the CFL in completed air yards with Ottawa, putting him in elite territory alongside Riders receiver Shaq Evans and Lions teammate Burnham.

Add in speedster Lucky Whitehead and suddenly Reilly has a dangerous array of weapons at his disposal on the coast.

Edmonton fans require no introduction to Derel Walker, but many of his teammates just might. Most of the offence and coaching staff have changed since Walker last wore the Double E back in 2018, but the 29-year-old is bound to be a dynamic target for Trevor Harris and new head coach Jaime Elizondo.

An elite route runner who makes separation look easy, Walker leads active receivers with a career average of 82.0 receiving yards per game, ranking fourth all-time among those that have played a minimum of three seasons behind Joey Walters (88.8), Allen Pitts (84.6), and Terry Greer (83.1).

Only Evans (18.5) and Rhymes (16.2) had more yards per catch than Walker (16.0) in 2019 among qualified receivers, as Walker forms a tantalizing duo alongside Greg Ellingson, and complemented by Armanti Edwards and Tevaun Smith.

In Winnipeg, do not be surprised if Bryant Mitchell quickly becomes the Bombers’ most potent weapon in a new-look offence featuring quarterback Zach Collaros and new offensive coordinator Buck Pierce.

Collaros reinvigorated Winnipeg’s vertical passing game in the 2019 playoffs, led by a resurgence from 31-year-old Darvin Adams, who had 198 yards and a touchdown on six catches (33.0 yards per catch) leading up to the Grey Cup.

In 2018, his last season in the CFL, Mitchell finished 13th in the league in receiving yards despite making only eight starts. In the eight games he did start, Mitchell averaged 106 receiving yards per game, on pace for 1,908 yards over a pro-rated 18-game season.

For the Ticats, Posey’s abilities should fit right in with one of the league’s most electrifying offences. Brandon Banks (657) and Bralon Addison (558) were yards-after-catch monsters in 2019, ranking first and second respectively among all receivers.

Posey, a former NFL kick returner who was once clocked with a 40-time of 4.39, was one of the Vernon Adams Jr.’s most reliable targets in 2019 and is poised to benefit further from the Ticats’ short passing game. Given some space, Posey is capable of turning any short pass into a long touchdown.

In Toronto, Eric Rogers, DaVaris Daniels and Juwan Brescacin lead the parade of new talent recruited by Pinball Clemons and John Murphy since the end of the 2019 season. Daniels has shown elite, No. 1 receiver potential, while Rogers has already scaled that mountain.

Still only 30, Rogers’ biggest obstacle through his four-year career, not including his two-year NFL stint, has been health, limiting him to just 45 career games. When on the field, the 6-foot-3, 215-pound receiver has been a matchup nightmare, averaging a career 70.6 yards per game.

There will be competition for targets in Toronto, as CFL veterans Chandler Worthy and Terrell Sinkfield Jr. are joined by former NFL regulars Martavis Bryant and Kendall Wright. Either way, Rogers and Daniels are proven game-breakers worth keeping an eye on.

The REDBLACKS are hoping that Jalen Saunders can re-discover himself. His career 15.8 yards per catch puts him in elite territory, along with his 76.4 receiving yards per game – second only to Derel Walker among active pass-catchers.

If the 28-year-old returns to his 2018 form, he’ll join RJ Harris and Brad Sinopoli to form a dangerous trio for quarterback Matt Nichols and new offensive coordinator Paul LaPolice. Saunders’ sample size of two seasons in the CFL is quite small, but the Oklahoma product could emerge as a No. 1 option in Ottawa’s offence.