Why the ’13 GC was the biggest moment in Rider history 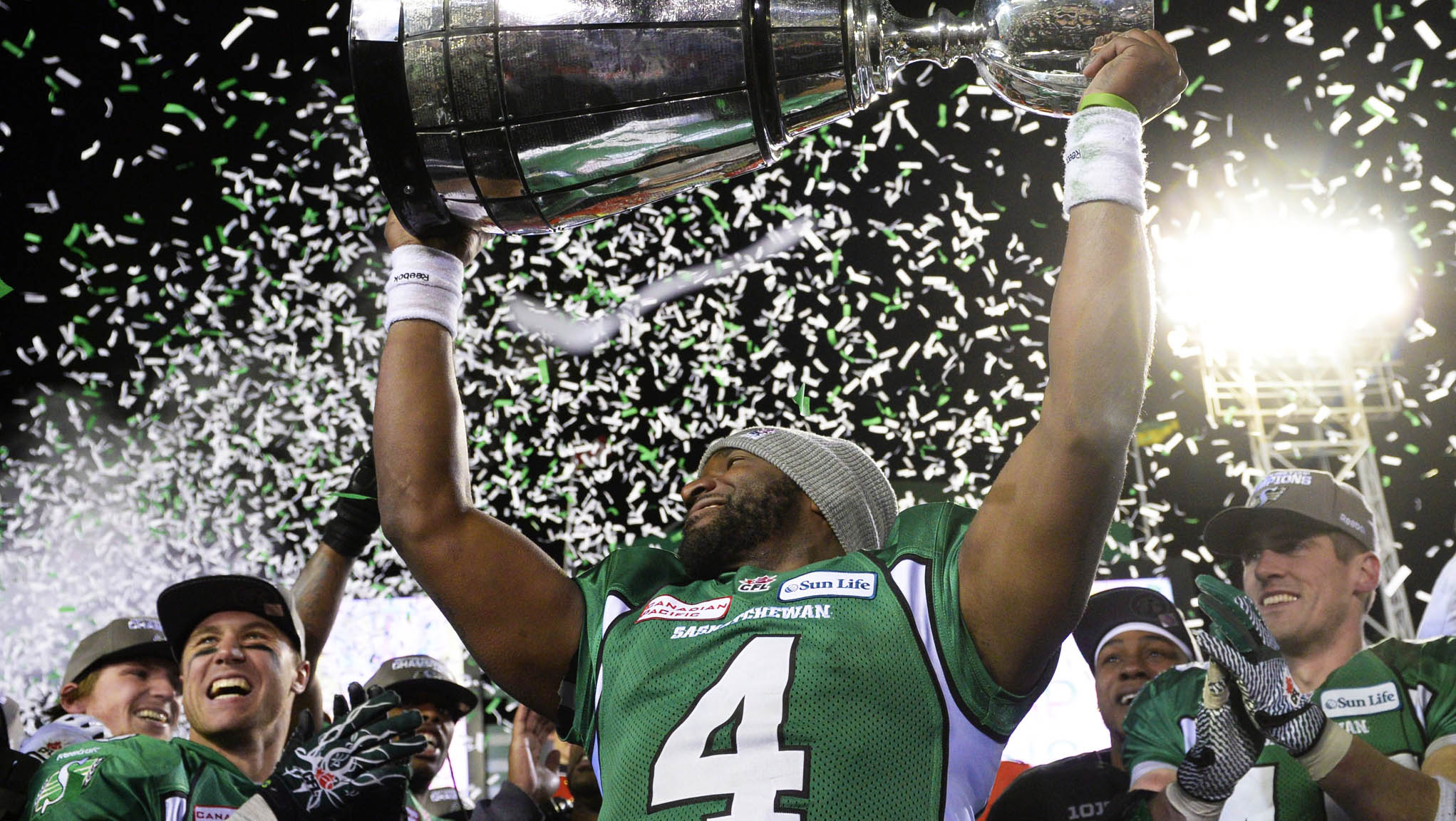 Why the ’13 GC was the biggest moment in Rider history

Those were the first words that came out of my mouth as I began the most exhilarating post-game show after the 2013 Grey Cup.

Calls and texts came in from the United States, Europe, Asia and across Canada and the province.

And when George Reed calls this game the biggest moment in franchise history, who is anyone to argue with man who helped the Riders win their first ever championship?

Yes, the 2013 Grey Cup was all about Saskatchewan.

It was the greenest, loudest and proudest Saskatchewan has ever been as the dream season became reality.

Now, we can’t ignore the fact that this game isn’t one of the most dramatic games our of the latest decade of championships added to the Grey Cup Portal powered by Mark’s.

But this game meant so much for the history of a community that has likely cried a lot more than celebrated in the over 100 year history of the franchise. And Rider fans will likely re-watch this game with more tears as they look back at the culmination of history, heartbreak and connection to the team they love.

It’s actually hard to put into words what this game meant on so many different levels.

Let’s start out with the players, coaches and staff whose names are actually on the trophy thanks to their dominate 45-23 victory.

‘Get the monkey off my back!’ Darian Durant shouted as he held the game ball as tightly as potentially anyone has in CFL history.

Durant was the face of the franchise and took the praise and the criticism. He answered to every issue and every question from the time he first started a game in 2008 to becoming the No. 1 guy in 2009. There were times fans, and even coaches, pondered whether he should be that guy.

Durant was the main piece to a corps of players that had to live through the heartbreak of the 13th man penalty from 2009 and then repeat as bridesmaids the following year.

Durant, Weston Dressler, Chris Getzlaf, Rob Bagg, Keith Shologan, Chris Best, and Rey Williams are among those players who thought they had the team to win a championship those two seasons but were left heartbroken and devastated.

2013 was also for general manager Brendan Taman. The Grey Cup had eluded him throughout his CFL career but it was his team, built by his vision and as a Saskatchewan-born GM it couldn’t have been any more special.

But the further you get away from the team you notice something. When I watch back the 2013 Grey Cup game I notice the crowd shots just as much as the major plays; Kory Sheets snatching the ball out of the air after a Darian Durant fumble or Sheets stiff arming Delvin Breaux out of the way or Geroy Simon’s first career Grey Cup touchdown or the snap flying by an extremely surprised Henry Burris as the crowd noise impacted the Tiger-Cats communication.

The reason I take note of the fans is I was one of them. I was a young Saskatchewan kid who grew up at that stadium and fell in love with the game there.

And we all knew it was the last hurrah.

Some said the week and the game was like a giant family reunion and it’s an accurate assessment. People were travelling from everywhere. People didn’t even have tickets to the game but they were there on Friday and Saturday night at Riderville to be with ‘family.’

The family has been through a lot. Three championships for the Riders over the 102 years allowed for Rider Nation to take their fair share of shots from other fan bases. Long before the 2009 too many men penalty and the lowest point of franchise history, there was the Tony Gabriel game winning grab in 1976. 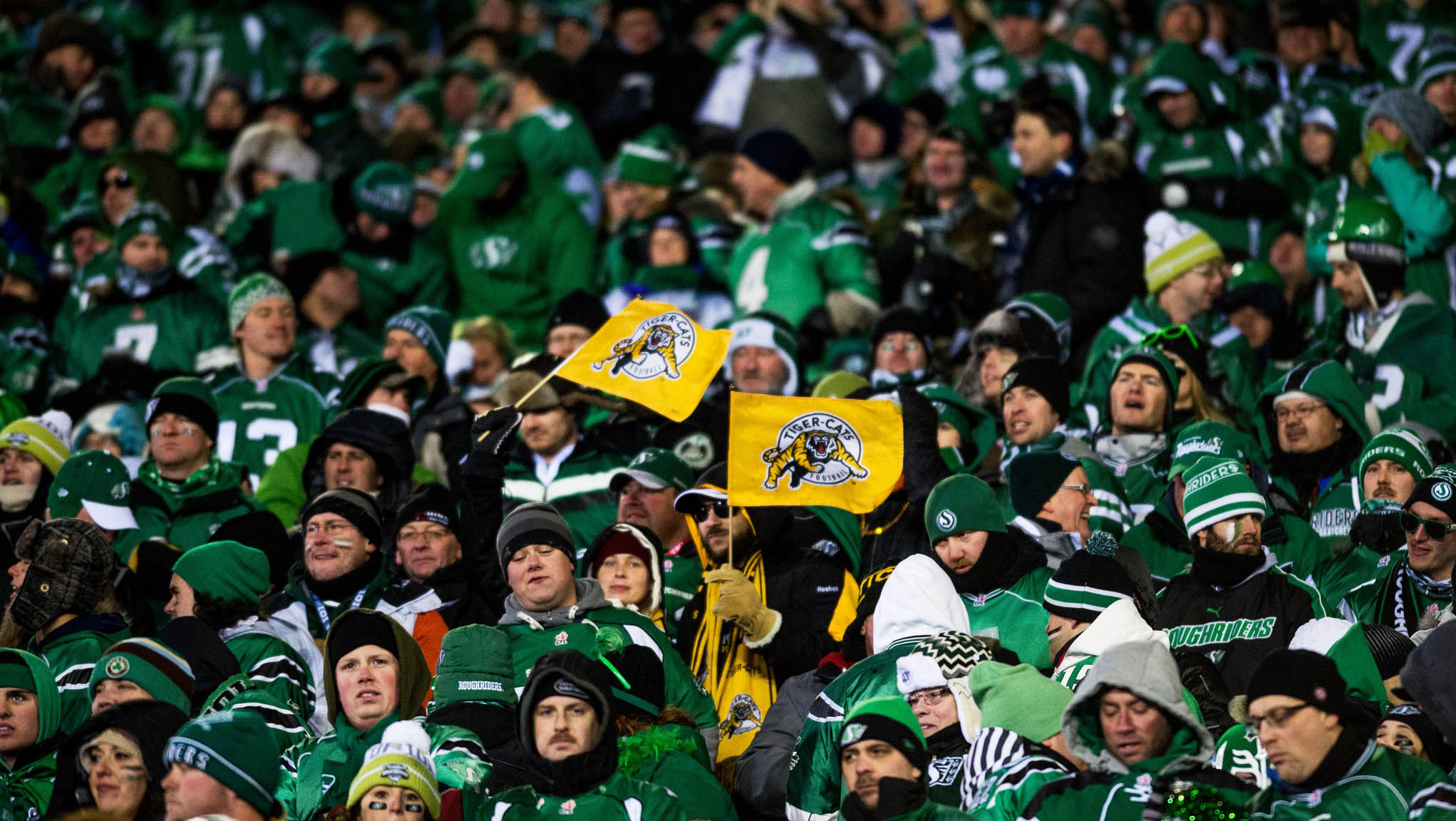 Ticats fans are surrounded by a sea of green during the 101st Grey Cup in Regina (Matt Smith/CFL.ca)

Fans had to raise money in telethons and lotteries to keep their team a float.

But there they all were, or at least as many as they could have crammed in to the stadium, able to celebrate something that wouldn’t have been dreamed of 20 years earlier when the team was losing money and barely anyone was showing up.

Now Taylor Field was jammed with green as it had been for over five-straight years as the organization had moved from loveable losers to the flagship franchise based on the passion the fans had for the big white ‘S’.

So as you re-watch the Riders blowing away the Hamilton Tiger-Cats know one thing, with all that history and all the heartbreak and all hardships and all the hype, there was no way, no how that anybody was coming into Taylor Field against Saskatchewan and winning that Grey Cup.

There was just too much on the line for the players and organization and the fans to let the opportunity slip away.

And if you want proof of that, you should have heard it when the players came flying out of the tunnel as a team. It may have been even louder when the Riders won the coin toss.

Those old walls were vibrating and didn’t stop shaking until the players and fans started to head to the Green Mile to continue the celebration.

It’ll be a moment in Rider history that will never be topped. It’s No. 1 all-time, forever and always.