Let me start with my draft grade for the Saskatchewan Roughriders.

I’m not big on winners and losers of the draft because you can come off looking like a fool in five years when the “can’t miss” prospects were total misses.

What I will do is give you the goods on where the draft picks for the Riders make sense for general manager Jeremy O’Day and the Riders, because there is not a lot to critique. 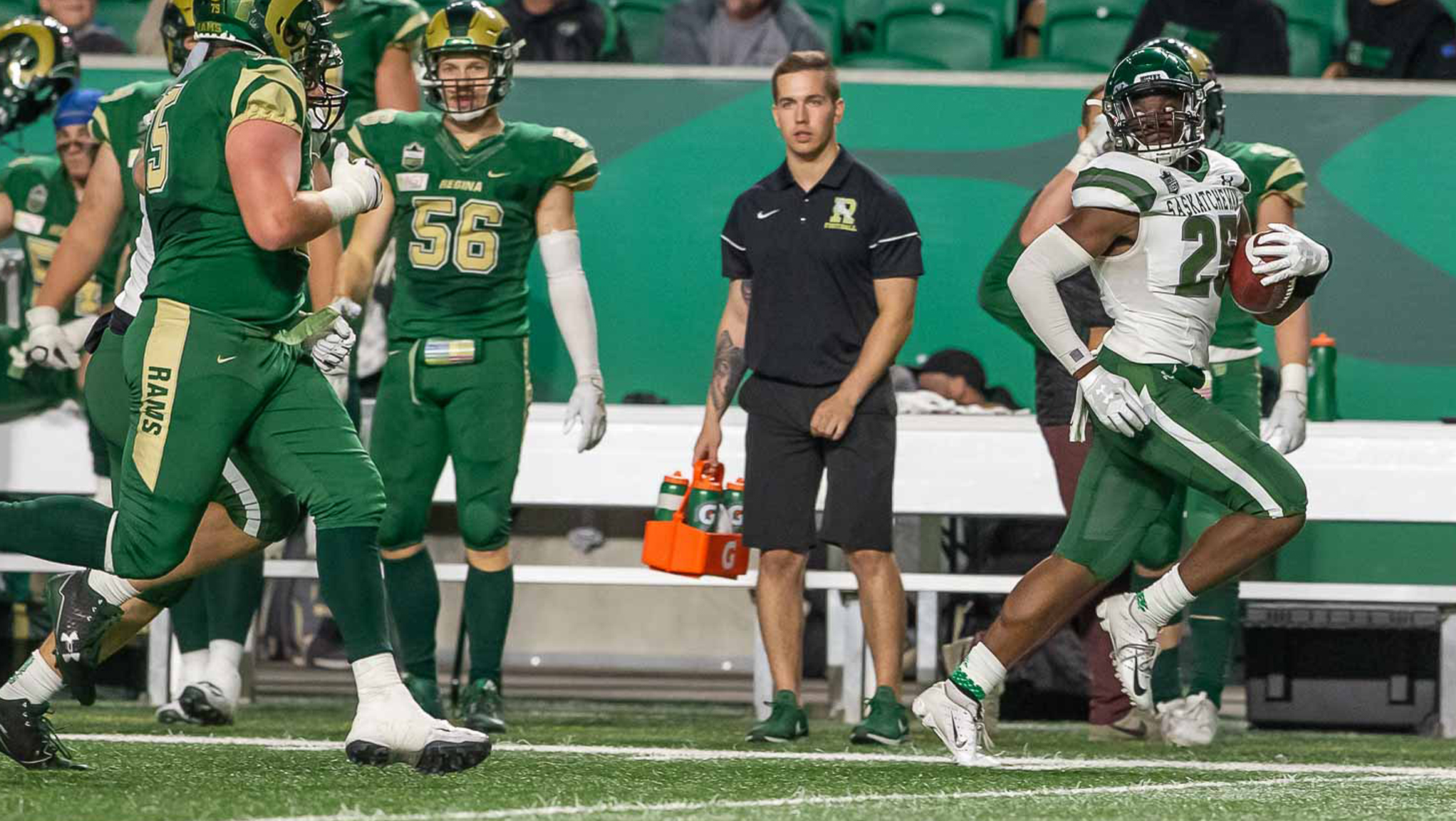 The Riders stayed within the province of Saskatchewan with the second overall pick, taking Huskies’ DB and 2019 U SPORTS defensive player of the year Nelson Lokombo (University of Saskatchewan)

First off, I was a bit surprised to see the Riders take Nelson Lokombo second overall.

Then I took a step back and considered the Riders picking second and having to wait in the snake style draft 17th. There was no chance Lokombo was going to last that long and Saskatchewan was big on the versatility Lokombo could bring to the defence, outside of just knowing he should be able to contribute at the very least on special teams in Year 1.

O’Day hinted going into the draft that the team might go all-American in the linebacking corps after Cameron Judge took off to Toronto this off-season, meaning they’ll look at possibly putting two defensive backs on the field with Mike Edem and Elie Bouka, the likely candidates to start.

However, any good GM knows if you’re doing that you need the depth to back it up. Cue the U SPORTS defensive player of the year moving up the draft board to No. 2.

The other position O’Day hinted they could look at expanding for ratio purposes is going from one to two Canadian starting receivers.

And TA-DA, with the second round pick at 17th overall they land Terrell Jana out of the University of Virginia.

Jana was considered one of the favourites to go first overall and I even believed an option for the Riders to take instead of Lokombo, so to say he has the potential of making eight other general managers look silly in a few years is an understatement. 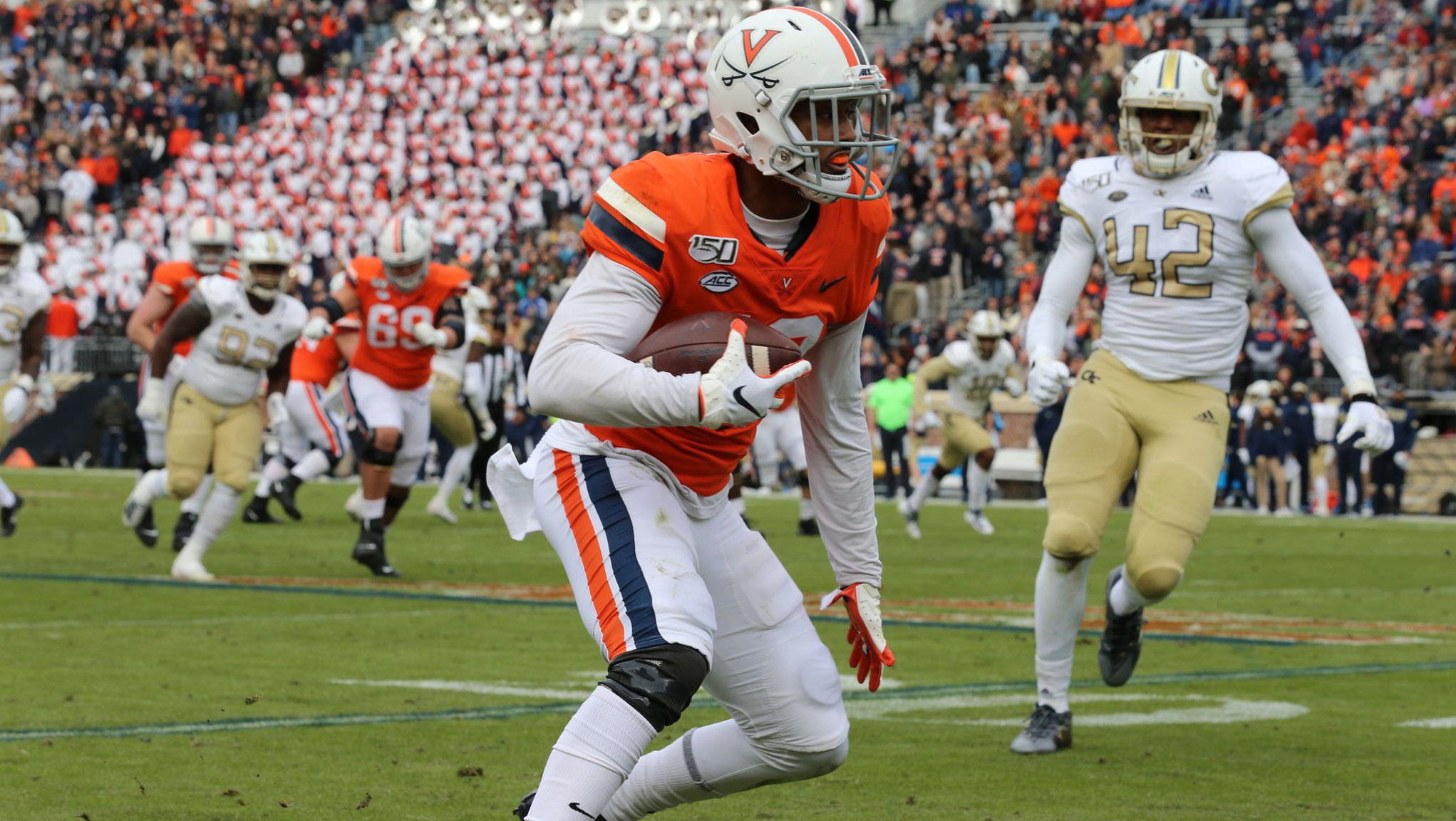 The Riders used their second round pick to take Virginia receiver Terrell Jana, who saw his name in the first round of many mock drafts over the last few weeks (Photo: University of Virginia Athletics)

Jana was a captain of his team in college and for good reason. TSN retold the story of why Jana didn’t have his last name on the back of his jersey this season. He was paying tribute the slave workers that helped build the University of Virginia campus because when visiting a new memorial on the campus he noticed a lot of the workers last names were either unknown or not documented.

The Riders used to field a starting receiving group of Canadians with Chris Getlzaf, Rob Bagg, Andy Fantuz and Jason Clermont. They’re clearly trying their best to bring back the Canadian air force with their last three drafts.

In 2018 they picked Justin McInnis and Brayden Lenius. Last year they drafted Kian Schaffer-Baker. Now, add another highly touted prospect to the mix.

These picks just show how much flexibility O’Day is giving Craig Dickenson to work his ratio.

Then came the futures pick for the Riders. Almost every team drafted someone that either still had one more year of NCAA eligibility or were drafted or signed to the NFL.

With their third pick, the Riders selected FB/TE Bruno LaBelle who is heading to the Arizona Cardinals this summer.

The six-foot-four, 250-pound tight end has a little bit bigger frame than former Rider Patrick Lavoie, who was a great spot player that could open up holes but also sneak out of the backfield and contribute in the passing game.

Who knows what the future brings for LaBelle in Arizona but the Riders again were in a position of strength to opt to take one of the players going to the NFL that early.

Now an interesting aspect of the CFL draft in 2021 is the fact that U SPORTS athletes didn’t get to play in 2020. Of course that means you didn’t get another year of evaluation on players. You didn’t see if they could keep stellar play in 2019 going into 2020 or vice versa. There were some interesting young players starting to get a shot in college who didn’t get to showcase a more regular role last season.

Rounds four through six was dominated by U SPORTS, I believe for just that reason. Consider 17 of 27 picks in the first three rounds were from US schools who actually got to play in 2020.

So to tell you for sure what the Riders are getting with their final three picks is best guess.

With Makana Henry and Charbel Dabire at defensive tackle, Cimankinda again gives more depth to the Riders with the ability to sit and learn and grow in the pros without being pushed into anything he may not be ready for. 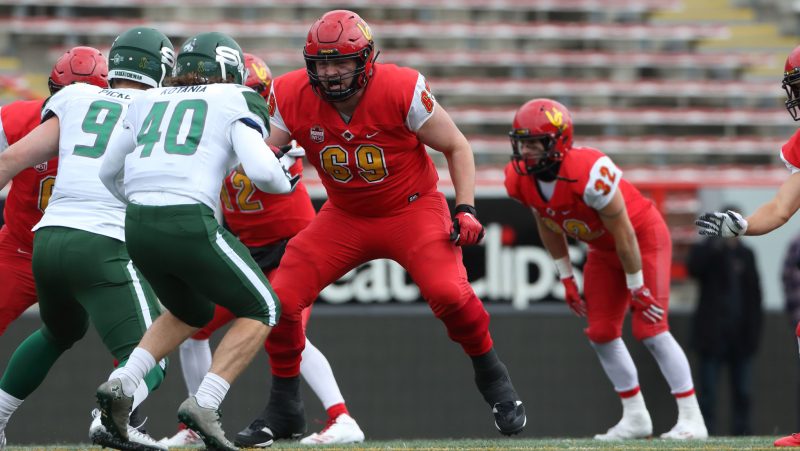 The Riders hope they’ve got a big steal with fifth-round pick Logan Bandy, who brings a lot of size and Vanier Cup-winning experience to Saskatchewan’s o-line (Photo: University of Calgary Athletics)

The Riders’ biggest potential steal in the latter rounds however came three picks later when they selected Logan Bandy out of Calgary.

If you read Marshall Ferguson’s final mock draft he had Bandy going to the Riders…SECOND OVERALL!!!

The standout offensive lineman from the University of Calgary was likely shocked as well that he waited this long to be drafted. However, when you see a player drop like this you can’t believe all the other teams including the Riders passing up on him through four rounds was a mistake. There are a few technique issues here but when it comes to raw natural abilities, you can see the Riders’ veteran people showing him the way to success in the CFL.

Finally, the Riders ended the draft how they started it, with a versatile and athletic defensive back in Matt Watson. While it’s extremely rare a late sixth-round pick becomes an impact player, the Riders will want to see Watson bring his aggressive style to camp and push some of the more veteran backup defensive backs currently on the roster.

Overall Riders outlook on the Draft

Biggest potential regret: RB Kyle Borsa. I can’t write this without a thought on the much-hyped running back from the University of Regina. The local Regina product had an outstanding performance in his combine and was great in his last season out with the Rams in 2018 before losing 2019 because of a PED suspension and then 2020 because of Covid.

They could have picked him instead of Bandy or Cimankinda and it’s not like local hasn’t made an impact for the Riders recently with Dan Clark, Brendon LaBatte, Evan Johnson, drafting Mattland Riley last year. I was getting messages late Tuesday from already disgruntled Rider fans that they passed on Borsa. It’ll burn even more if Borsa turns into something special for the team that actually drafted him, the rival Winnipeg Blue Bombers.

Jeremy O’Day appears to have just sat back and did what he promised going in, that he was going to pick the top player left on his board. I’ll be back in five years to tell you exactly how O’Day did on draft night 2021.