Elliot Graham had a small group of people with him on Tuesday night, anxiously watching TSN’s broadcast of the CFL Draft.

There was disappointment in his mom, Sarah Graham’s Hamilton home when the show ended and his name hadn’t been called. Elliot, his mom, his grandfather, whom he calls his papa and two of his closest friends shifted their attention to the CFL’s Draft tracker and waited, pick by pick.

Eventually, at 29, they got what they were looking for when they saw that the Calgary Stampeders had taken him with their fourth-round pick. Elliot was separated from them when the news broke.

“I heard the reaction from upstairs and I looked at the screen and just dropped to my knees,” he said. “I was in shock. I couldn’t believe it, it was so exciting.”

His selection caps a very trying 14-month stretch that first saw the pandemic limit his training ability and eventually lead to the cancellation of the 2020 U SPORTS football season. The lost year of football would have been Graham’s fourth season with the UBC Thunderbirds, which is a season that CFL.ca’s Marshall Ferguson has called a crucial one in his coverage of the 2021 Draft class.

A year shrouded in uncertainty for players and CFL talent evaluators alike — who of course had their 2020 season cancelled too, leaving them in a difficult spot to address their own Canadian talent needs — could leave people bitter about what was lost, or tense over what they’re walking into this year. Graham isn’t one of them.

The six-foot-three, 243-pound 22-year-old used this football-free season to dive in at the gym to be physically ready to make the leap to the CFL that he’d envisioned when Blake Nill recruited him out of Hamilton’s Westdale Secondary to play at UBC. While he got his body ready, he took advantage of the extra time to push ahead on his psychology degree. 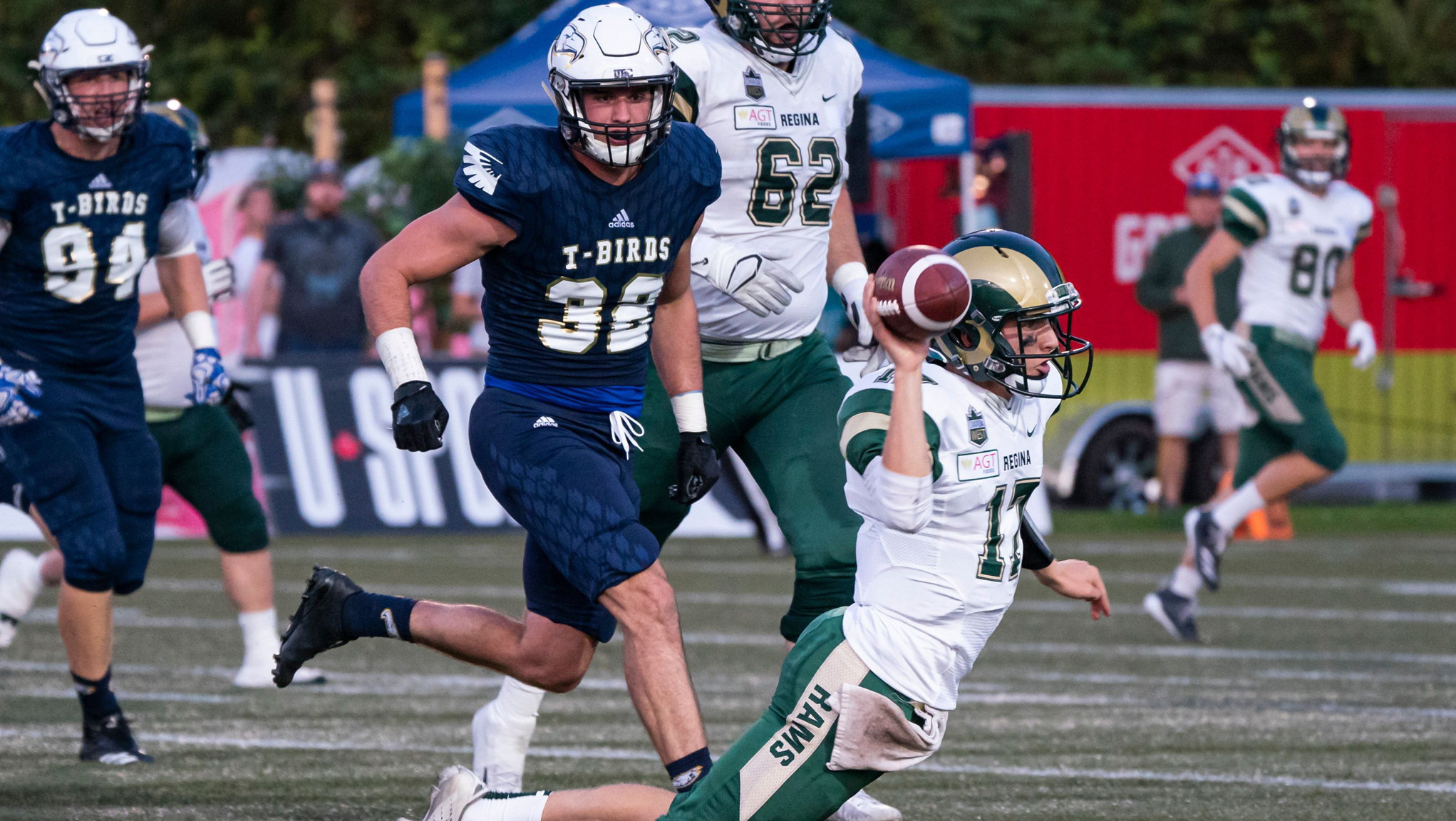 Elliot Graham (at bottom), made the move from linebacker to defensive end after his first year at UBC. With the Stampeders, he’s hoping to move back to his natural position (Photo: UBC Athletics)

“I saw that as another opportunity to train harder and catch up in school,” he said of the cancelled season.

“I hit it extremely hard in the gym and on the field training and then I did five courses each semester, just to catch up academically, so a full course load. It’s just another opportunity to get ahead and just kind of flip it from a negative into a positive.”

That desire to turn a negative into a positive might carry Graham further in his career than the numbers he posted in this year’s Regional Combine (a 4.86 40-yard dash, 21 reps on the bench press to name a couple of them), or his stats at UBC, where he had a great freshman season as a linebacker and was moved to defensive end when the team needed a body at that spot.

Graham fell to his knees on Tuesday night when he saw he was drafted, overcome by the road he’d taken to get to this point. It’s a moment that when he was in high school, very few people other than Graham would have told you was a possibility.

“I don’t come from too much in terms of, you know, family and finances. I happen to have a small family. It’s just me, my mother and my papa for the past…almost decade now,” Graham said.

“My mother struggled with addiction, but she’s a lot better now. We’ve had a lot of challenges in terms of that and no father in my life, really. So I kind of looked to guidance with high school coaches, coach Nill, there’s other coaches and male figures. They’ve had a huge influence and impact on my life and my career.”

There’s a heartbreaking ripple effect from situations like this and Graham felt it. He didn’t have that consistent presence at home for long stretches when he was a kid. In high school, he fell two full academic years behind. In his grade 12 year, with his mom getting help, he moved in with a friend and in his words, pulled himself up by his bootstraps and started to get his life together.

Football played an enormous part in things coming together for him. 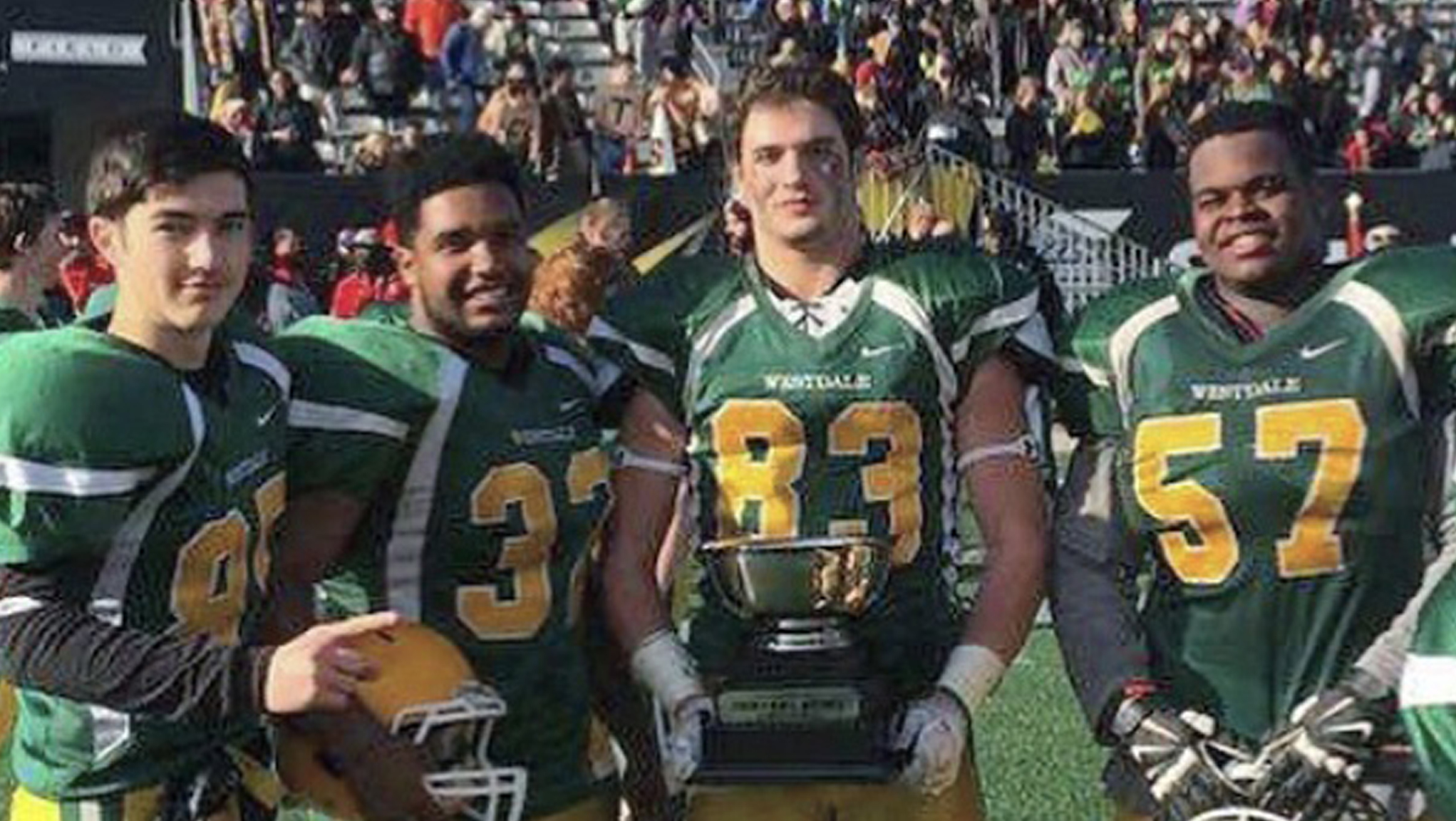 “If it wasn’t for football, I probably wouldn’t be anywhere near where I am right now,” he said.

“In high school, I lacked guidance. I was two years behind and I had to fast track and do booklets just to catch up. I did a post-grad year, just to catch up and then I ended up graduating with honours, just getting my life together.

“That’s kind of where I fell in love with football, in high school just because I loved the brotherhood. I could see where it could take me, it brought out my potential.

“I’ve met so many brothers and so many best friends through the sport, at UBC and in high school. I just love how the guy next to you has to have your back at all times. Everyone’s got a job to do. Everyone’s working to a common, shared goal. It’s something I really appreciate about the sport.”

As he got his grades in check and he started getting recruited to play U SPORTS ball, Graham had a realization: If he could pull himself through that very difficult path, he could do anything.

“When I apply myself, great things happen,” he said.

Over the last few years, whether it was juggling the costs of university tuition while playing sports, then losing a crucial year in his football evaluation process or just simply navigating a once-in-a-century pandemic, Graham hasn’t worried too much. He knows what he’s capable of.

After a couple of years of playing on the d-line, Graham feels confident that he can join the Stamps and make an impact as a linebacker. That’s where he had his best statistical season with the Thunderbirds, when he had 60 tackles, a sack, a forced fumble and an interception that came with a team record-setting 107-yard return touchdown.

“I think I’ll be a linebacker. I’ve got a huge upside, a lot of untapped potential. I think I can be developed into a great linebacker,” he said. He’s looking forward to reuniting with his former T-Bird teammates, in Trivel Pinto and Michael O’Connor. More than anything, after a year away from the game that helped change his life, he’s ready to get back on the field and compete.

“I’m looking forward to the next two months of training and getting in better shape to come in ready to go. I think I’ll fit in great with the organization,” Graham said.

You get the feeling that when Graham sees himself finding a place in the Stamps’ organization, it’s something that he’ll make happen.