The 2021 CFL Draft was a lot of fun and got the excitement levels pumping for the coming season. By no means am I a draft expert, but I do have a bunch of takeaways from one of the most interesting years we’ve ever seen.

In a league that doesn’t typically play with a traditional tight end, seeing Jake Burt go first overall to the Hamilton Tiger-Cats was interesting, yet not surprising. From Jordan Williams to Alex Singleton, it feels like every year recently there’s a late addition to the class that vaults right to the top. This year we knew that was going to be Burt.

At six-foot-five and 230 pounds, Burt joins the Ticats as one of the most unique players in the league and I’m fascinated to see how he ends up getting used. Burt has great hands and impressive strength and has a great chance to be a Canadian option at any receiver position as time goes on. Many wonder, however, if Hamilton uses Burt in a hybrid H-back role in the early stages of his professional career.

Regardless, the Tiger-Cats made a good call using their first pick on Burt. With three additional picks in the top 19, Hamilton had flexibility and went for the homerun at number one. They knew Burt wasn’t going to be available for their next pick at nine, so they made the move and added another potential impact piece to an offence that already boasts nothing but playmakers. 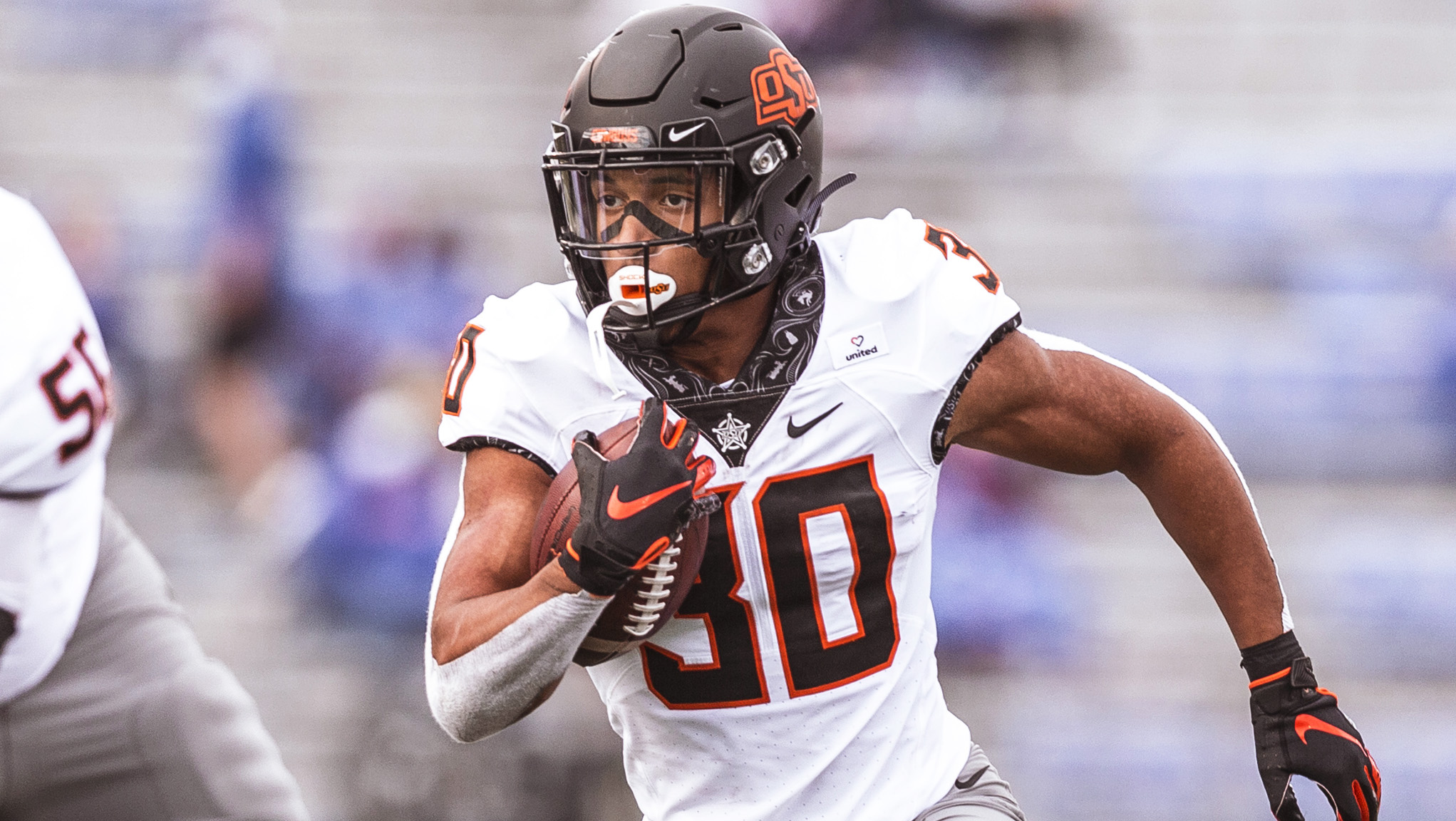 The Stampeders look to play the long game with Sherwood Park, Alta.’s Chuba Hubbard. A fourth-round NFL Draft pick by Carolina, the Stamps took Hubbard in the fifth round of the CFL Draft (Photo: Oklahoma State Athletics)

Oklahoma State has had the market cornered on top Alberta talent in recent years. For instance, Calgary product Shane Richards went first overall to the Argos in 2019 after three years with the Cowboys. This year it was a pair of highly touted Albertans coming out of Oklahoma State and the Stampeders selected them both.

Calgary used their first round pick, eighth overall, on linebacker and local high school product Amen Ogbongbemiga before using a fifth rounder on Sherwood Park running back Chuba Hubbard. Neither player is a sure thing to suit up in red and white but by using the local card, at least the Stamps stand a fighting chance, even if it’s further down the road.

As a fourth round pick of the Carolina Panthers this year, Hubbard is a long game play for Calgary, but could pay off huge. Ogbongbemiga went undrafted in the NFL, but signed as a free agent with the Los Angeles Chargers. Free agent signings are never sure things down south, and thus typically go higher in the CFL than those drafted.

The Stampeders know they’ll have to wait a few months at the very least to bring Ogbongbemiga into the fold, if they do at all. But if he doesn’t stick with the Chargers in camp, it’s not crazy to think Ogbongbemiga would jump at the chance to play for his hometown team as opposed to searching for work in the NFL. It’s an interesting one to watch.

ALL OVER THE MAP

Hubbard was one of two players drafted in both the NFL and CFL Drafts this year. He joins Minnesota defensive back Benjamin St-Juste, who went in the sixth round to Toronto a few days after Washington made him a third round pick. Receiver Josh Palmer (third round, LA Chargers) and defensive back Jevon Holland (second round, Miami) didn’t end up getting selected by a CFL team.

We were expecting those players to fall down, or off, the board, so it wasn’t overly surprising. What was interesting, though, was seeing the variety of locations for NFL free agent signings. The aforementioned Ogbongbemiga went in the first round, while offensive linemen Pier-Olivier Lestage and Alaric Jackson went one round later, to Montreal and BC respectively. Finally, tight end Bruno Labelle was a third round pick of the Riders.

The BC Lions were thinking big picture with their first two picks. The Lions used their fourth overall selection on North Carolina State defensive lineman Daniel Joseph, who is set to return for his super senior season next year. In the second round, BC opted to go with the aforementioned Jackson out of Iowa after signing a free agent deal with Los Angeles Rams.

Neither player projects to be in training camp later this year, which is just fine with new head coach Rick Campbell. “It’s a little bit of a bold strategy,” Campbell said. “I think for us to be where we want to be as a really strong organization and really build this team, we’ve got to see the big picture and that’s what we’re trying to do.”

Knowing the talents of both Joseph and Jackson, if they end up being Lions down the road, this could be a very fruitful draft. 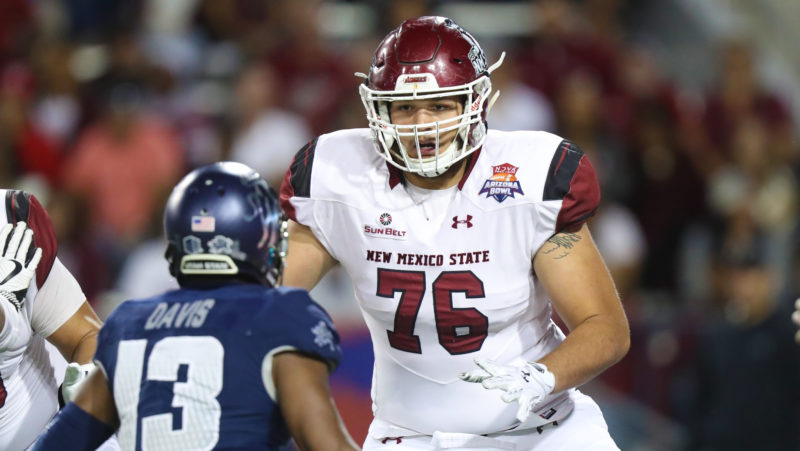 We only saw two offensive linemen taken in the first round, which is unusual. In fact, thanks to our outstanding CFL research team, we can tell you that’s the lowest number of first round linemen in more than two decades, dating all the way back to 2000. However, things picked up in the second round with some strong value picks.

As mentioned, the Alouettes and Lions went with Lestage and Jackson in round two. Both were ranked in the top-seven of the CFL Scouting Bureau’s final rankings and could be huge additions if/when they shake loose south of the border. But there were two other linemen taken in the second round that also look promising.

The Argos went with New Mexico State’s Sage Doxtater at 12th overall, bringing the Bureau’s third-ranked lineman into the fold. One pick prior, Calgary used their second round pick on Wilfrid Laurier’s Bryce Bell, who slotted in at No. 6 among linemen in the final rankings. With the run on defensive players in round one, four teams were thrilled with their offensive line selections in the second.

Virginia’s Terrell Jana was the first receiver selected, and he went late for his position. With Saskatchewan taking Jana 17th overall, 2021 marked the first year a receiver didn’t go in the top 16 since 1995, per our research team. It’s a nice value pick for the Riders, too, as Jana was ranked third by the Bureau in their first list before falling to 15 in their final release. Jana’s numbers were down as a senior, but he went for almost 900 yards and three touchdowns in his junior season.

What was really notable, though, was the lack of receivers taken overall. Only four total receivers were selected, although you can bump that to six if you count the two tight ends. Even still, that’s quite the contrast to other recent years. For instance, last year saw nine receivers selected, down from 14 in 2019 and 12 in 2018.