Trusting The Process: Stamps tap into their systems for ’21 roster

Trusting The Process: Stamps tap into their systems for ’21 roster

CALGARY — They’re the standard of success in the CFL, sitting on a 15-year playoff appearance streak and have played in six of the last 12 Grey Cups, winning a pair of them. They’ve produced three Most Outstanding Player winners in the last 10 seasons and their coaches in that time, John Hufnagel and Dave Dickenson, have each won a coach of the year award.

The pedigree is so high now that the Calgary Stampeders’ 2019 playoff exit — a West Semi-Final loss on a bitingly cold day to the Winnipeg Blue Bombers — felt like a stunner.

They haven’t won the Grey Cup every time they’ve played for it, but the Stamps have defined dominance in the CFL, rattling off anywhere between 12 and 15-win seasons through the previous decade. As the club starts another decade, it does so with a lot of new faces. Their track record should give them the benefit of the doubt that not much should change for Hufnagel’s smoothly-run operation. 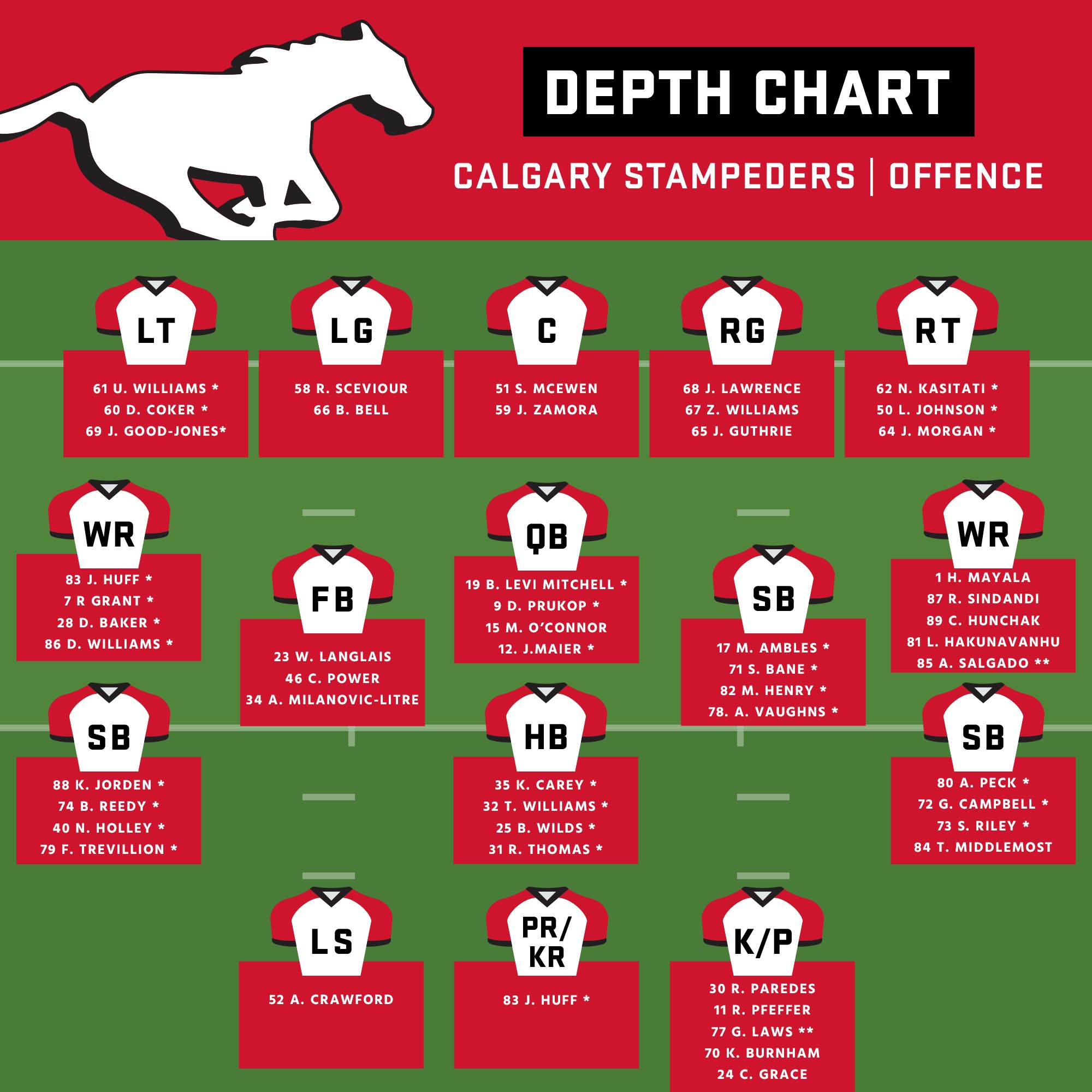 With the Stamps, it starts with Bo Levi Mitchell. The two-time MOP winner and two-time Grey Cup champion had dealt with some shoulder issues in 2019 and played in 11 games. He threw for 3,464 yards with 19 touchdowns and 11 interceptions. Mitchell has spoken multiple times about the silver lining in the cancellation of the 2020 season being that he’s been able to get fully healthy. If he can stay healthy, the 31-year-old could be entering into the prime of an already brilliant career.

The other side of those highlight reel passes are his targets. Kamar Jorden heads the list of talented receivers that Mitchell connects with. The 32-year-old is also coming off a knee injury that kept him out of all of the 2019 season save for that first-round playoff loss to the Bombers. Injuries have limited Jorden’s very promising career. In 2018, he was on track for a monstrous season, posting 944 yards through 10 games when he was injured on Labour Day against Edmonton. Despite missing half of the year, he was still named a West Division All-Star. Jordan has spent most of the past year in Calgary getting ready for the 2021 season. If healthy, Jorden could have a tremendous season.

Reggie Begelton (Green Bay Packers) and Eric Rogers (Toronto Argonauts) were Mitchell’s targets of choice in 2019 and they’re both no longer with the team. The receiving corps will take a next man up mentality and there’s reason to believe the passing game should roll along. Canadian Hergy Mayala had 562 yards as a rookie in 2019 and was the team’s third-most used receiver. Josh Huff and Markeith Ambles were behind Mayala in 2019 and both will be looked to more this season. The other interesting thing about Calgary’s receiving corps is its Canadian depth.

Behind Mayala we see Richie Sindani and Colton Hunchak; a pair of eighth-round draft picks that are poised to play an increased role for the Stamps this year. At six-foot-four and 195 pounds, rookie receiver Luther Hakunavanhu out of York University, is intriguing as well.

The Stamps should look to Ka’Deem Carrey to head up the run game this year, with some competition behind him in camp for split duties, the way the team handled the run game in 2019. If there’s a breakout player at that position in camp, things could change. Calgary was last in rushing yards in 2019 (1,283) and didn’t look to run the ball often, with just 280 attempts, which was the second-lowest total in the league.

We can’t talk Stamps’ offence without mentioning the most important cogs in the wheel, in their offensive line. The addition of Sean McEwen at centre was a big one in free agency 2020. That could free up American Ucambre Williams to play left tackle, with Nila Kasitati anchoring the other end of the line at right tackle. Guards Ryan Sceviour and Justin Lawrence could move around in their spots and across the line, their players have some centre experience, giving them some additional depth behind McEwen if needed. The Stamps allowed 34 sacks in 2019, good for the second-best total in the league. O-line coach Pat DelMonaco knows how to get the most from his players and he’s got another good group to work with this year. 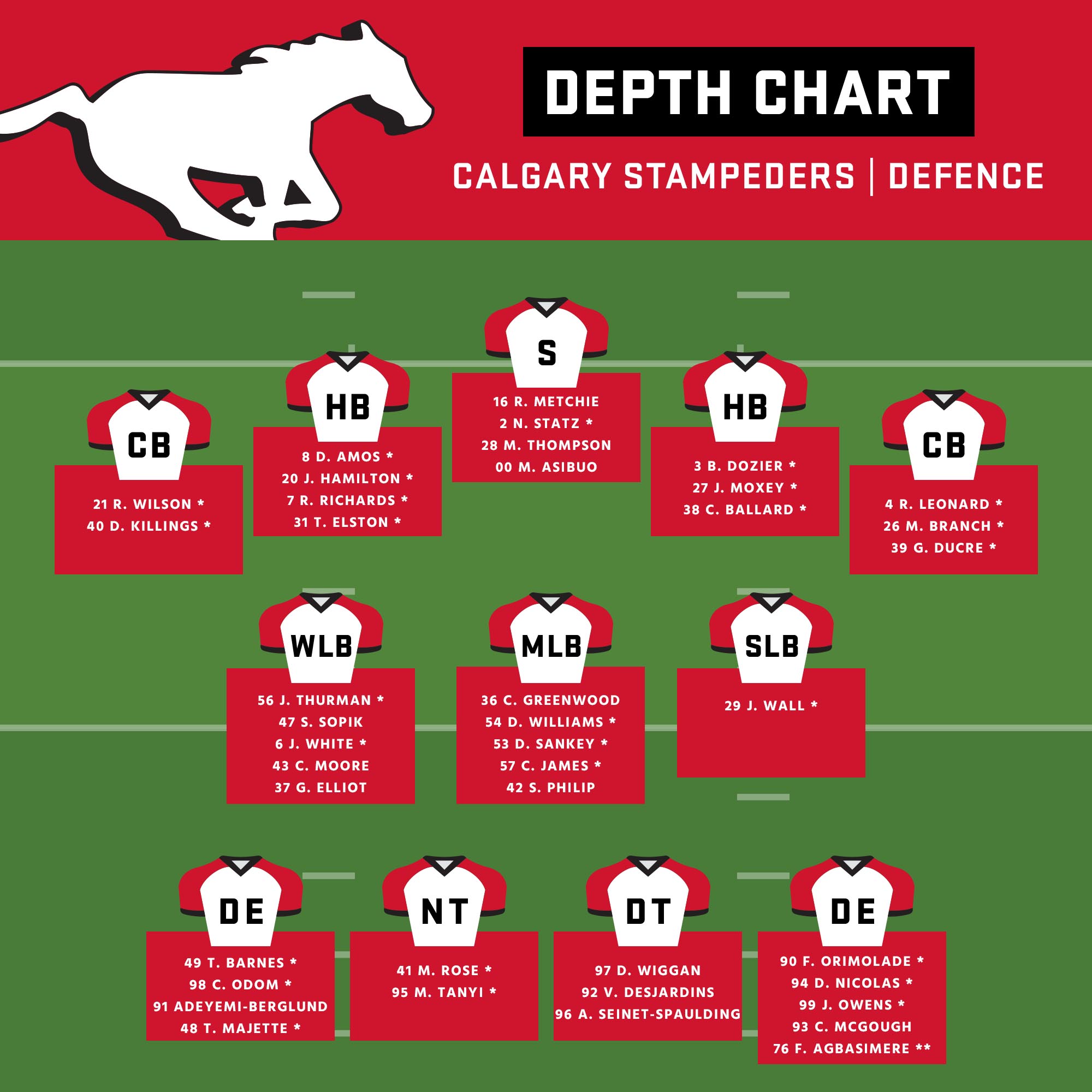 Defensively, the Stamps were among one of the league’s best overall groups statistically. The team allowed 20.1 points from opposing offences, which was third behind league-leading Hamilton (17.9) and Saskatchewan (19.3).

The Stamps’ defensive backfield proved tough, leading the league with 26 interceptions in 2019. Of course, Tre Roberson’s seven picks played a big part in that. With him joining the Chicago Bears, free agent signing Richard Leonard will come over from Hamilton and try to bring a similar energy. DaShaun Amos and Royce Metchie will get a chance to grow in their roles, as will Raheem Wilson.

Where the Stamps will want to bring some more spark is in their ability to get after quarterbacks. The team was fifth in sacks in 2019, with 35 and will look to some new faces on the d-line for help. Cordarro Law and Chris Casher combined for 17 of Calgary’s sacks last year and both have moved on. Interior linemen Mike Rose and Derek Wiggan will be back and will be bookended by Tavaris Barnes, Chris Odom, Dadi Nicolas and Jarrell Owens, all CFL rookies with NFL experience. National d-lineman Connor McGough will head into his fourth CFL season and will be one of the more experienced players in that group. Defensive end Folarin Orimolade is back from a season-ending quad injury and will have a shot at a significant role in the d-line.

Those are a handful of question marks at an important position, but the Stamps’ long history of finding talent — and this can apply to every position on the field — shouldn’t have fans of the team worried. We see first-year d-linemen come to the CFL and thrive on a regular basis, so there’s no reason to think that Hufnagel and Co. don’t feel confident in what they’ll see when training camps open next month.

Finally, on special teams, we see more new faces. The reliable, familiar one is kicker Rene Paredes, one of the most clutch players in the league at his position. Ronnie Pfeffer joined the team after Rob Maver’s retirement to take on punting duties and Huff is a good candidate for the return game, though training camp will likely unearth a few more speedy bodies that are willing to run headfirst into a mob of humanity.

Medicine Hat, Alta. native Aaron Crawford will play long snapper for the Stamps, after spending the last five seasons in Hamilton. The veteran should provide a smooth transition for an integral part of the special teams unit.