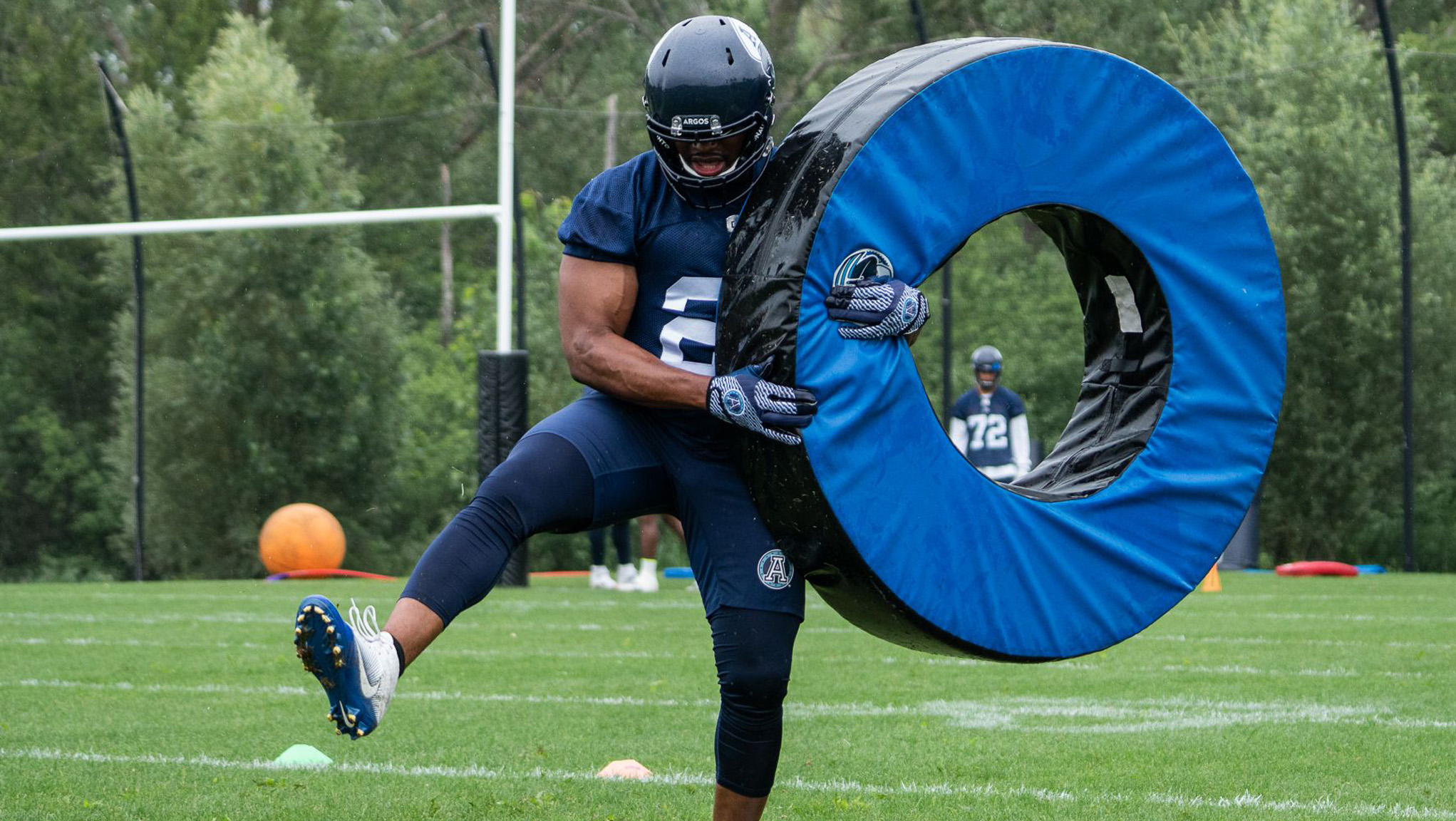 Hello, Edmonton Elks. Got my eye on you. You in particular, Trevor Harris. I know how competitive you are. Receiver Shai Ross wowed the entire internet with a video of him dunking an Oreo in a glass of milk while doing a backflip. So, where’s your video, Trevor? WHERE’S YOURS?

THE SASKATCHEWAN ROUGHRIDERS ARE GONNA TRY TO FREAK PEOPLE OUT

“I believe in multiplicity,” said Saskatchewan offensive coordinator Jason Maas following one of the team’s camp practices over the weekend.

I believe in it, too, even if Maas is not talking about the charming 1996 Michael Keaton comedy about a guy who keeps cloning himself in order to free up more time, with madcap, hilarious results ensuing, naturally. Look, it’s not a sensational movie or anything, but it’s all right. And it’s got Andie MacDowell in it. I’m a sucker for Andie McDowell.

What was I talking about?

Jason Maas is planning on using pass-catchers all over the place, so if you’re the kind of fan who loves a receiver being a straight up Z, or Y, or an X or whatever, this ain’t gonna be for you.

I happen to love a coach demanding that receivers be adept at playing any spot on the field. We’ve gotten plenty used to that when it comes to defensive backs, so why not their counters on the other side?

Maas admits he may have had too much time on his hands during the long, double off-season, and is adding and subtracting as camp wears on. So even he’s unsure as to whether he’s got a nice, smooth bourbon or something more suited for paint removal.

Either way, the philosophy is a welcome one and I can’t wait to see a multi-dimensional QB like Cody Fajardo execute it.

I sure do love me some trickery and some bamboozlement. Maas is up for it. We know Paul LaPolice is up for it in Ottawa. Down the St. Lawrence in Montreal, Khari Jones has shown a taste for offensive pretzelry (new word trademarked by Don Landry Media, all rights reserved). And we hear that Buck Pierce, now the OC in Winnipeg, is demanding that all his receivers learn every conceivable pass-catching position, just like they’re doing in Sasky.

We’re primed for some head-spinning, fast-break stuff in 2021. 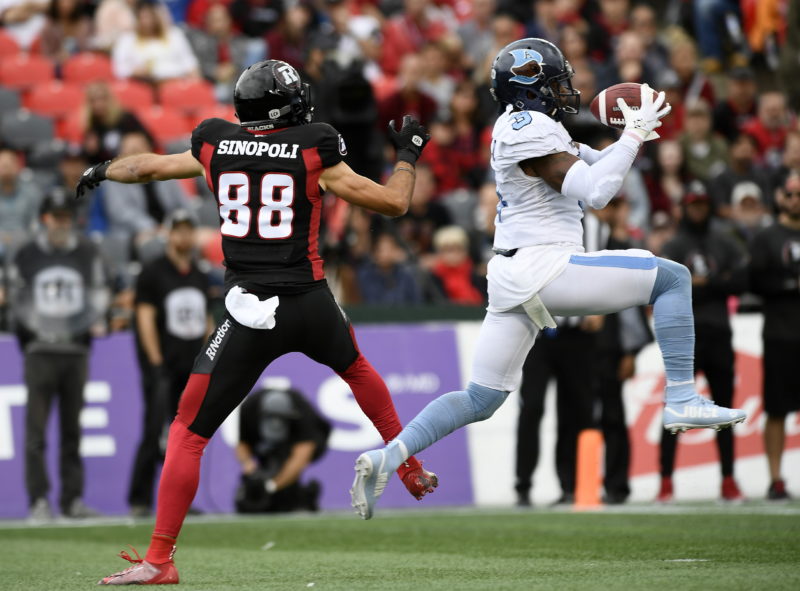 Alden Darby was one of Toronto’s top defensive performers in 2019. He brings his skill and experience to a deep Blue Bombers defence after being traded to Winnipeg on Monday (Photo: The Canadian Press)

The Toronto Argonauts made just a huge amount of changes during this extended, extended, oh-so-extended off-season.

One of the things you could’ve felt certain of is the status of Alden Darby, the talented and playfully brash defensive back who’d enjoyed a very good 2019 as an Argonaut.

Darby played well at SAM that season, before being shifted to safety. He excelled there, too.

And he was thought to be, by so many, to be good to go in Double Blue once again. After all, Darby was a good player and loved by his teammates.

Now he’s been traded to Winnipeg, as the Argos play Twister with all the veteran DBs they have remaining at camp. In return, the Boatmen get a player they say they’ve been eying awhile in American OL Terry Poole.

Darby will probably be just what the doctor ordered for a Winnipeg team that brought so many new faces to camp to try and replace some key vets (Marcus Sayles, Winston Rose) who moved on from the ’19 champs.

And, now, with the season-ending injury to one of the holdovers, Mercy Maston, Darby might well get plunked down into a leadership role. The Argos can attest that he’s well-suited to that.

THE DONUT IS THE NEW POOL NOODLE

Not sure if every team is employing the big donut in their drills but I’ve seen the Argos and Roughriders rolling it out for players to, umm, tackle, I guess.

I’m all for training camp safety, of course, and that is what the rolling donut helps with. A tackler can close in on it and wrap it up without any hard contact, while still working on technique.

It makes me long for the days I used to see Jason Maas whacking Ricky Ray with pool noodles during practice, to mimic a lineman harassing him without any actual forceful physical contact.

I also miss the mini-parachute; the one that coaches would attach to players and then make them run a sprint, the drag of the chute providing resistance.

The rolling donut, though, is in a place all its own, simply because whenever I think of the “rolling donut,” I cannot help but attach the first part of an old phrase, one we used to use continually when I was a teenager, aiming it at a hapless friend who’d earned our scorn.

I can imagine yelling it at a 245-pound linebacker, who might take it the wrong way.

FIND YOU SOME THADDEUS COLEMAN LEVEL HAPPINESS IN YOUR LIFE

🎥 OL Thaddeus Coleman on returning to the Green and Gold. #CFLTC pic.twitter.com/vlKJPmgpPb

The Edmonton Elks’ offensive lineman was exuberant during a post-practice interview this week.

At 36, the native of Waukegan, Ill. is in his third stint with the Elks, after having spent the previous four seasons playing for the Roughriders.

But even then, Coleman reveals, he returned to Edmonton every off-season to live. He’s been wintering in the Alberta capital since 2014, apparently.

“I said it way back in the day,” explained Coleman. “I was like ‘I really like Edmonton and I really wanna move up here.’ And it ended up happening! That’s a blessing right there.”

The Elks added Coleman to the roster about a week ago, but even if they hadn’t, he might well have been seen at Commonwealth Stadium this season as a food truck operator, something he’s gotten going during the pandemic.

“That’s what I was plannin’ if I wasn’t gonna play ball,” Coleman said.

It’s a true love story, this relationship between Coleman and his adopted home.

Like the saying goes: Find someone who looks at you the way Thaddeus Coleman looks at Edmonton.

I STILL KNOW HOW TO GIGGLE

I spent the better part of the first week of camp giggling as I breezed through all the stories and videos and excited utterances of players, coaches and execs.

I wouldn’t say the COVID era completely robbed me of joy, but it damn well nearly did.

As I sat in front of my computer screen this past week, scrolling and snickering quite audibly, my wife called from the next room. “Are you watching Minions, again?” she asked.

It was a fair question since I do watch the thing every time I come across it while flipping channels. It’s pretty great, even without Andie MacDowell being in it. But no, that was just me, exuding some unbridled happiness, sounding a lot like the little yeller fellers. I’ve been feeling some of the greatest feels I’ve felt in well over a year.

I know you’ve felt it, too, CFL fam. It’s so good, that kind of happiness, ain’t it?

The great love of our sporting lives is back. We are all giggling Minions.

AND FINALLY… C’mon, Calgary Stampeders. Where is Rene Paredes’ annual training camp mug shot? I’m dying to know if he can keep up the greatest streak of profile picture consistency in the history of sports. This may weigh more heavily on my mind than even the Hamilton Ticats’ starting quarterback question.