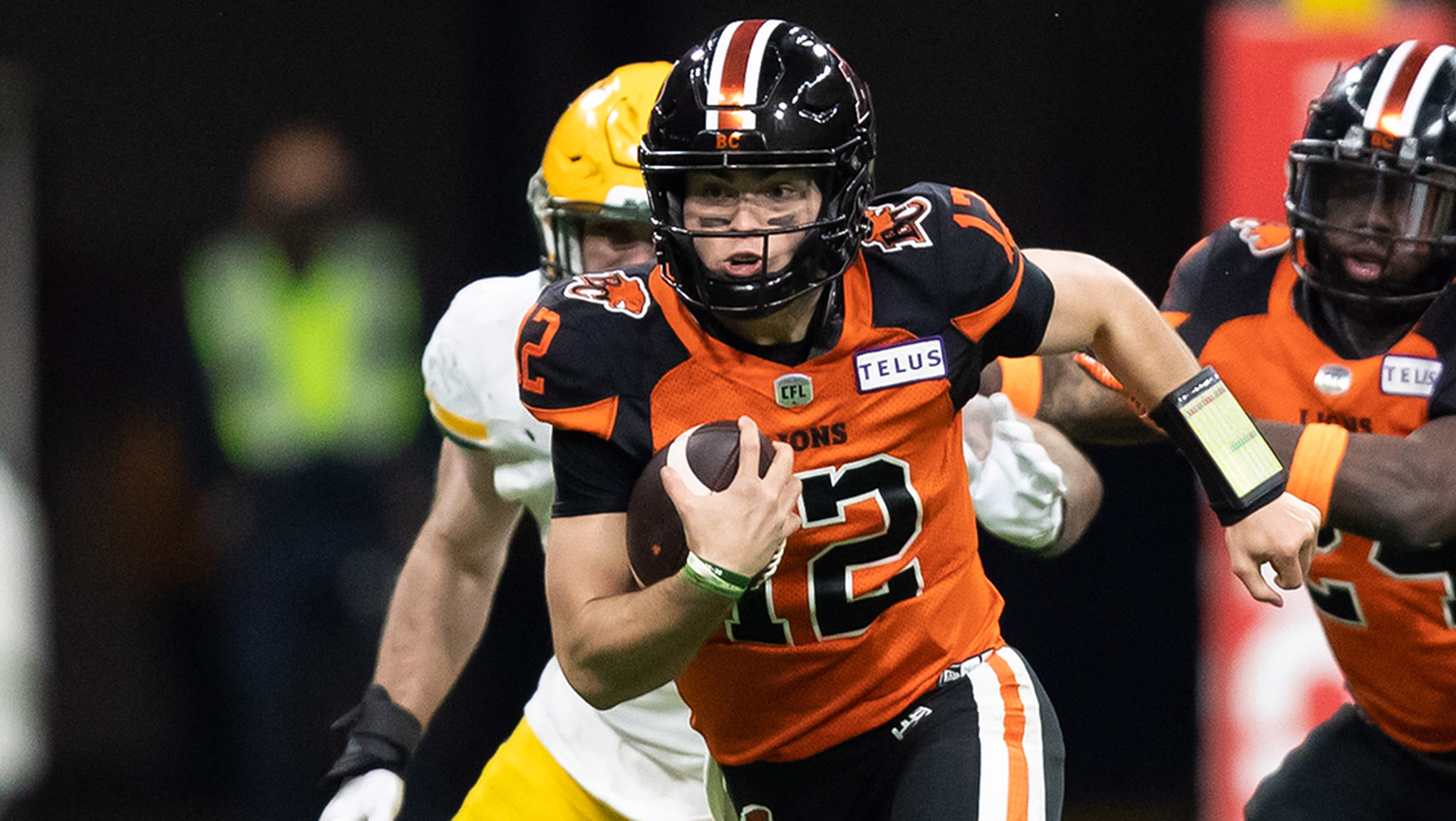 Hello, Paul LaPolice. Going for two and either a win or a loss instead of one and overtime? Fist bump, LaPo. FIST BUMP.

WINNIPEG: PROTECT THE PRECIOUS AT ALL COSTS

Heading into the playoffs, a number of teams did not exactly get what they wanted in terms of positive reinforcement and/or momentum building.

Some of them – most of them, really – weren’t exactly banking on that, sitting key starters ahead of the post-season. Toronto, Saskatchewan and Winnipeg are among those teams and so they won’t be alarmed with the results so much. The Montreal Alouettes would not be one of those teams, though, as they had something to play for in their regular season finale and came up empty. Not the trend they wanted.

RELATED
» Matchups Set: 108th Grey Cup playoffs ready for kickoff
» Leaders of the Pack: Statistical leaders of 2021
» Road to the Grey Cup: News and notes
» Steinberg’s MMQB: A question for every team in the Semi-Finals

However, a rather important takeaway comes for the highly-favoured Bombers; At all costs, quarterback Zach Collaros’ health must be protected. Neither of his understudies filled the faithful with confidence over the final two games of the regular season.

The good news for Winnipeg watchers is that the Blue Bombers have the CFL’s most impenetrable fortress in that dynamite offensive line of theirs.

Beyond that, I’d have Head Equipment Manager Brad Fotty fashion a suit of triple-ply bubble wrap for Collaros, to be worn every waking moment of every day leading up to the Western Final. And I’m talking the full get-up here; bubble wrap helmet, bubble wrap jacket, bubble wrap pants, bubble wrap shoes. Bubble wrap gloves, too, sure.

In sneaking up on the Blue Bombers during the dying moments of Saturday night’s game, the Calgary Stampeders got the type of caffeine jolt that could give them an emotional boost as they prepare for the Western Semi-Final in Regina.

They could have just ended the season with a ‘meh, whatever,’ in losing a game that would do nothing to change their playoff positioning fate. ‘We kept starters healthy,’ they could have said, while shrugging and moving on.

Might have been a little concerned with their own back-up QB situation, with Jake Maier looking very different than he had in his early-season go as an injury-replacement starter. But with Maier finding his way during a late-game surge in a 13-12 win, that burden isn’t so heavy.

The Hamilton Ticats, meanwhile, seem to be over it, whatever blues may have dogged them following a bad loss in Toronto in Week 15.

They got a thorough enough win over Saskatchewan, with quarterback Jeremiah Masoli looking better, certainly, than he did in Toronto, and with back-up quarterback Dane Evans performing well, too. That the Roughriders were not at full strength is not to be completely overlooked, but the Ticats’ mission, simply, was to erase any doubt that had been created in falling to the Argos in a big battle that decided the Eastern flag.

Also, defensive lineman Ja’Gared Davis seemed to play angry in this game and and a ticked off Ja’Gared Davis is a game-changer, so the Ticats have that going for them in the playoffs. Their goal, this week, ought to be doing everything they can to keep Davis in a bad mood. Sorry, Ja’Gared. It’s for the greater team good, fella.

THEY FOUGHT THE GOOD FIGHT ALL THE WAY THROUGH

All hail the Ottawa defence. Finally, finally, they were rewarded with an offence that could take advantage of the splendid work being done on the other side of the ball, in a last-second 19-18 win in Montreal.

Most of this season looked like most of this game did; the REDBLACKS defence being impressive, but wasted, as it spent so much time on the field due to an offence that would most times be charitably characterized as “struggling.”

As the Alouettes, ahead 18-11 with inside three minutes remaining, drove the field for what looked like the game-clinching points, I thought “yeah, can’t blame the defence, they’ve gotta be exhausted at this point. Again.”

And yet that defence created a turnover when linebacker Micah Awe blasted the ball from the arms of Montreal running back Jeshrun Antwi, with two and a half minutes remaining.

Kudos to the men of the Ottawa defence, forever fighting during a season that had them continually swimming against raging currents.

BONUS TAKEAWAY: If they’d opened the Coach of the Year balloting beyond just head coaches, I do believe a lot of East votes would’ve gone to Ottawa Defensive Coordinator Mike Benevides this season.

NATHAN ROURKE: SO FAR SO GOOD

Sure, Nathan Rourke got his college training south of the border, but he’s a born and bred Canadian and that is something to be excited about as the young quarterback ticked all the boxes in his pro football debut as a planned starter.

In BC’s 43-10 win over Edmonton, the 23-year-old flung the cowskin with authority (yes, COW skin. As Ottawa’s Richie Leone informed us in an instructional video earlier this season, CFL footballs are made of cow leather. Umm… I did not fact check that).

We might want to asterisk this performance, though, as Rourke was taking on an Elks’ defence that was playing its third game in seven days and they did appear to be – quite understandably – running on fumes. Still, Rourke made a lot of right decisions, and even if his receivers were finding windows that were bigger than they would otherwise be against a well-rested defence, they were still the right decisions.

Besides, if Matt Dunigan likes the young man’s footwork and pocket-climbing management, that’s good enough for me. Oh, and the fact that Rourke quickly but earnestly checked on a sideline cameraman after wiping him out earns him a nice-guy Canadian politeness nod.

Welcome, Nathan Rourke. Are you the one?

ANTHONY CALVILLO WAS A KNUCKLEHEAD IN THE 90’S

Well, what? All these takeaways have to be so right up to date all the time?

It’s news to me that Anthony Calvillo was his own worst enemy during the early part of his career, the part where he struggled mightily and was terrible. Before he turned the corner and won three Grey Cups, ending up with just shy of 80,000 yards passing.

But there AC was, on Friday night, in the TSN booth, talking about what a numbskull he was back in the day.

“When I was with Hamilton, I was a knucklehead,” the hall of famer said, leading me to burst out laughing as I watched from my couch. I mean, it was so surprising.

“I thought I had all the answers,” Calvillo added.

The universally accepted story of Calvillo’s rise to greatness has always been the one where the Montreal Alouettes built an offence around his particular skill set, rather than trying to force him to be something he wasn’t. While that might be true, turns out it is only part of the tale, and Calvillo admits that his ego was good and properly reconfigured by the man he backed up in Montreal for a time, Tracy Ham.

“He was an amazing quarterback that really taught me how to be a professional quarterback,” said Calvillo.

AND FINALLY… That surprising yet uplifting game-winning drive by Ottawa’s offence? That was the football equivalent of parring the 18th hole in golf, after you went all shank-fest on the other seventeen. It gets you thinking “can’t wait for the next round.”