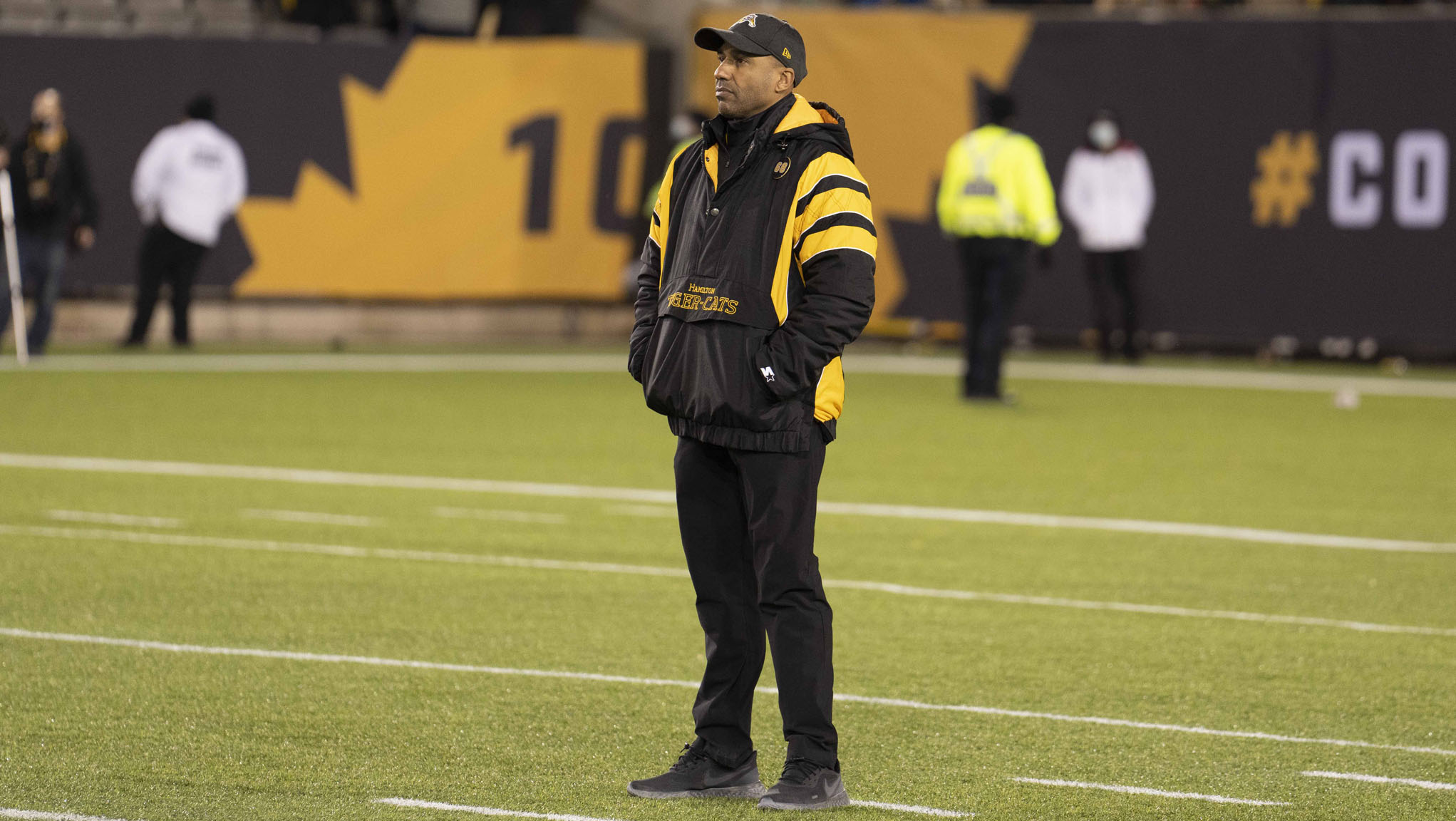 “It’s, man…it’s just tough. I know it’s a general statement but it is, the amount of reasons are long,” Steinauer told reporters on Tuesday at the Ticats’ year-end press conference. He and the Ticats are two days removed from an overtime Grey Cup loss to the Winnipeg Blue Bombers on their home turf at Tim Hortons Field.

“You  just want it so bad for each person that’s so invested. (There’s) not a lot of sleep to be had but it’s going to take a few more sunrises to put this one behind us.”

Steinauer seemed like an open book on Tuesday, discussing the rumours about his future, his team’s quarterback situation for 2022 and beyond and the Ticats’ chances at next season. After hosting their first Grey Cup in 25 years this past week, the city of Hamilton will play host to the championship game again in 2023.

Two years into the future can seem like 20 to a football coach, but the questions around Steinauer’s future are more immediate. Reports surfaced during Grey Cup week that he could be in the running for the defensive coordinator job with the Washington Huskies. He fully addressed that on Tuesday.

“I can look everybody in the eye and say that I have not been contacted by the University of Washington for their defensive coordinator job, either by (Huskies head coach) Kalen DeBoer or anybody from the university. That’s what I have. That’s what I’ve got.”

Beyond the coach, the 2022 Tiger-Cats roster that takes the field could look drastically different than heartbroken one that left it on Sunday night. Quarterbacks Jeremiah Masoli and Dane Evans are both set to become free agents and their coach was honest about the probability of having them both back.

“I think it’s probably highly unlikely that we get both, two quarterbacks of that calibre under contract again,” he said.

“That’s a rare thing and just a credit to them for just wanting to be a part of it. Would we entertain something like that? Absolutely but that’s part of their decision.”

Masoli came back from his 2019 ACL tear and re-gained the starting job out of training camp over Evans. In Week 2, Masoli was injured, which led to Evans getting three starts in his absence. At one point this season, both of the top QBs were hurt, which led to third-stringer David Watford getting the Ticats a pair of wins before Masoli healed up and returned to the lineup.

The 33-year-old held the job steadily for the final six weeks of the regular-season and into the Eastern Final, when Steinauer handed the reins of the offence to Evans after a slow offensive start for the team. Evans, of course, led the Ticats to the Grey Cup game, but aggravated a neck injury in the second quarter and was replaced by Masoli. The switch worked out, as the Ticats were a deflected TD pass away from topping the Bombers in regulation on Sunday.

“They’re going to want to play and we totally understand that it’s not likely we’ll be in a situation this fortunate, likely again,” Steinauer said.

Having played in and come up short in the 2019 and 2021 Grey Cup games, Steinauer was optimistic about his team’s championship window. With a lot of moving pieces up in the air — free agency and a new collective bargaining agreement to sort out — it’s hard to see too far into the future.

“Because I do think culture has something to do with it. Will we look the same? It never works like that. In football and with how many free agents we have, we’ll put our best foot forward on some and we’re going to lose some.

“Some people have earned the right for a bigger contract that we’re not going to be ale to pay, it’s definitely not personal. Sometimes it just doesn’t work out like that. Plus there are some young players that will eventually step up. I think our window is wide open.”

For now, Steinauer will head into the winter and hope that after a long, trying year that saw the league bounce back from its cancelled 2020 season, the sleeps will eventually start to grow longer. He didn’t get to end the Ticats’ Grey Cup drought, but he was proud of the team that played for him this season and won’t forget the city’s first Grey Cup game in a quarter century.

“The city of Hamilton showed up and I couldn’t be more proud of that.”