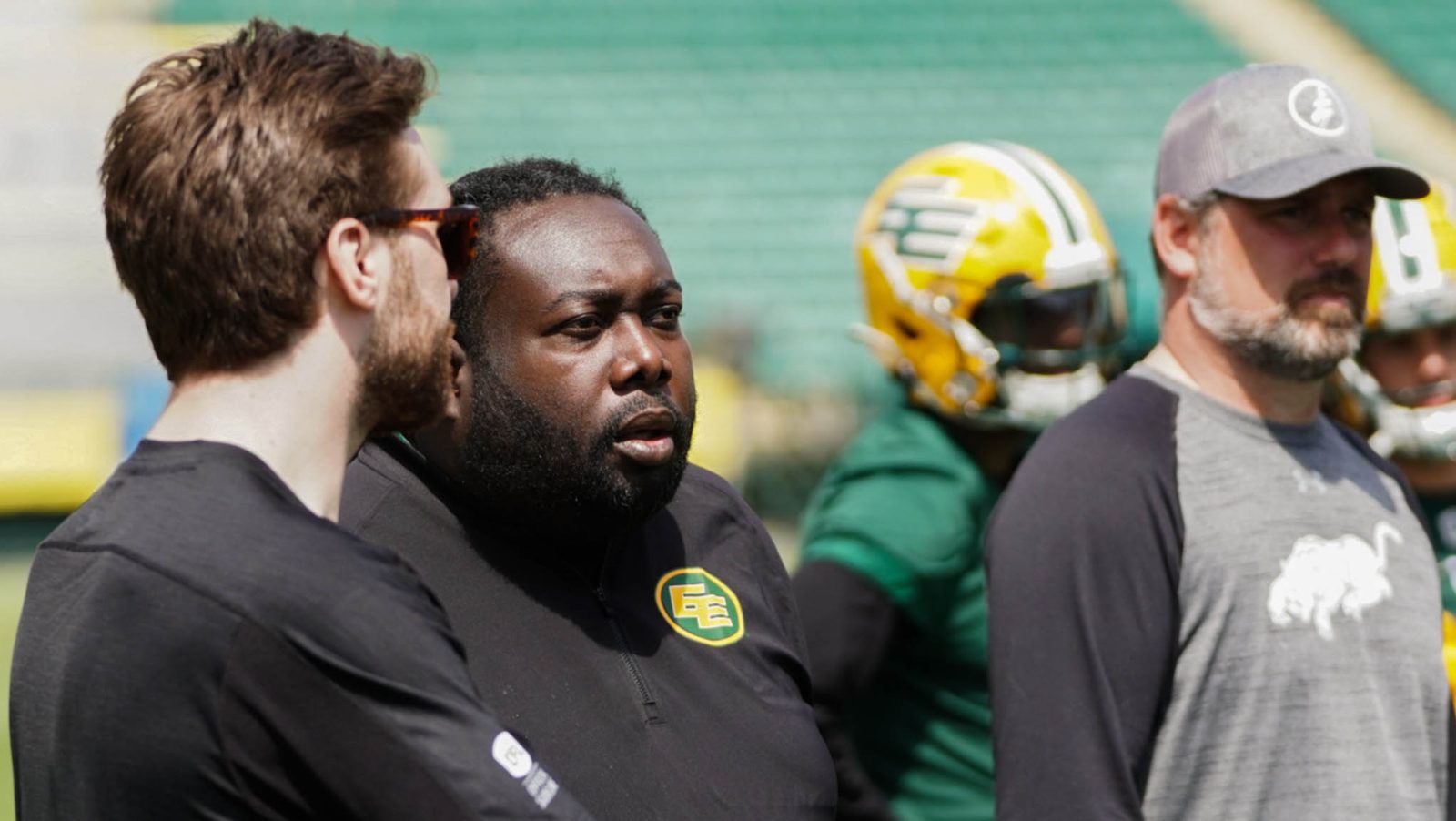 Every morning at around 5 a.m. at the Edmonton Elks training camp, Gladymir Charmant and Chris Jones take an hour-long walk.

Charmant, a defensive line coach with the University of Montreal Carabins, uses the one-on-one time with the Elks’ general manager, head coach and defensive coordinator for a deep dive into how to run a football program.

“I really get to pick his brain about the draft, about what he didn’t like about practice,” said Charmant, who is attending the Edmonton training camp as part of the CFL’s Diversity in Football Program.

“This is an opportunity to learn about football operations. I’m learning how to manage a whole team. I come to the stadium with coach Jones every morning and I leave with him every night. This is a hands-on experience. I’m getting to learn from someone I consider the best.”

Charmant, a Montreal native who played his college football for the Carabins, has two goals during his time with the Elks.

First, he’s learning coaching skills and techniques he can apply when he returns to the Carabins. Charmant is also gaining knowledge he hopes will help in his long-term goal of operating a football program at the Ecole secondaire Georges-Vanier in Laval, Que.

Charmant helped start a program at the high school a few years ago.

“I really built it from scratch,” he said. “I didn’t really know what I was doing. I was just winging it.” 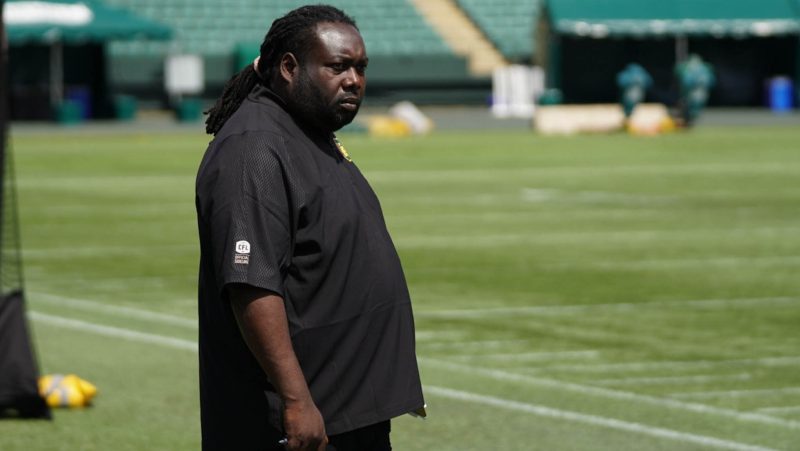 Gladymir Charmant plans to take his experience with the Elks this month back to the Montreal Carabins and to help him eventually build a strong high school program (Photo: GoElks.com)

In 2018 Charmant took the coaching job at the University of Montreal. When the Diversity in Football Program became available, he saw it as a chance to get a better understanding on how to run a high school program.

“This is the best internship I could have had,” he said. “I’m seeing hands on how things work.”

During his career Charmant has coached at the midget and bantam AAA levels in Laval. He was head coach of the Montreal Royals, whom he guided to the Quebec Junior Football League championship game in 2016. He’s also spent time as a teacher.

“In my life I had a couple of football and basketball coaches that really impacted me,” he said. “That’s what I want to do.

“I’m very grateful for what (the University of Montreal) are giving me but I think the high school level would be the best for me.”

During his time in Edmonton, Charmant has watched how Jones runs an up-tempo training camp with plenty of time devoted to 12-on-12 play.

He’s also learned the man who freely shares his thoughts during the early morning walks changes when the practice whistle blows.

“The switch flips quickly,” Charmant laughed. “When it’s practice time he has no friends. He cussed me out a couple of times for not doing what I was supposed to do.

“But you know, at the end of the day when we get into his truck and we’re going back to the hotel he explains to me why and what happened. I really appreciate he’s not just treating me like an intern. He’s really hands on with me.”

Maxie was a member of the former Baltimore Stallions that became the Montreal Alouettes in 1996. Charmant said the return of the Alouettes started a resurgence of football in Quebec. 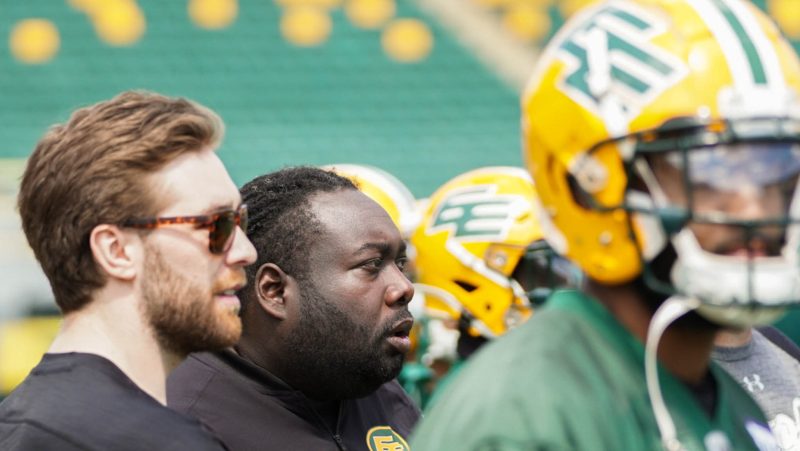 Charmant gravitated to football as a kid, when the Montreal Alouettes rejoined the CFL in the ’90s (Photo: GoElks.com)

Charmant remembers attending an Alouettes training camp and having his picture taken with Maxie.

“So fast forward and now I’m in his office, we’re speaking about a whole bunch of stuff,” he said. “He’s a big dude, he looks mean but he’s so soft spoken.

Under Jones, Edmonton uses a more aggressive defensive system than the Carabin, but Charmant has gained ideas on how to run a practice and drills for players.

“No one walks around,” he said. “Everybody has to run everywhere. There’s no wasted time. Everybody is gassed at the end, whether you are a coach or trainer or player.

“Just the speed of the game, the speed of coaching. That’s what I’m trying to bring back to the University of Montreal.”

The Diversity in Football Program will see each CFL club’s football operations department welcome an individual representing a racialized group or an under-represented community.

Charmant said while there are many Black coaches in the CFL, it’s still a challenge to find jobs.

“The coaching staff here, they all know each other,” he said. “Who you know gets you places and what you know will keep you there. Unfortunately, if you look at the head coaches at the university, college, or high school level, one coach leaves and they are going to put someone he knows back there.

“I think by this one month opportunity, I’m coming back to the university level with the experience that if it wasn’t for this program I would have never got.”

When he first arrived in Edmonton, Charmant wondered if the Elks coaches would accept him.

“I’m a university coach, my English isn’t good,” he said. “But the coaches really embraced me. They told me they are a phone call away.

“I don’t have a father that was a coach or a cousin that played in the league. I really didn’t know anybody at this level. So I’m very grateful for the opportunity.  This gives me a lot of stripes in football in Quebec.”