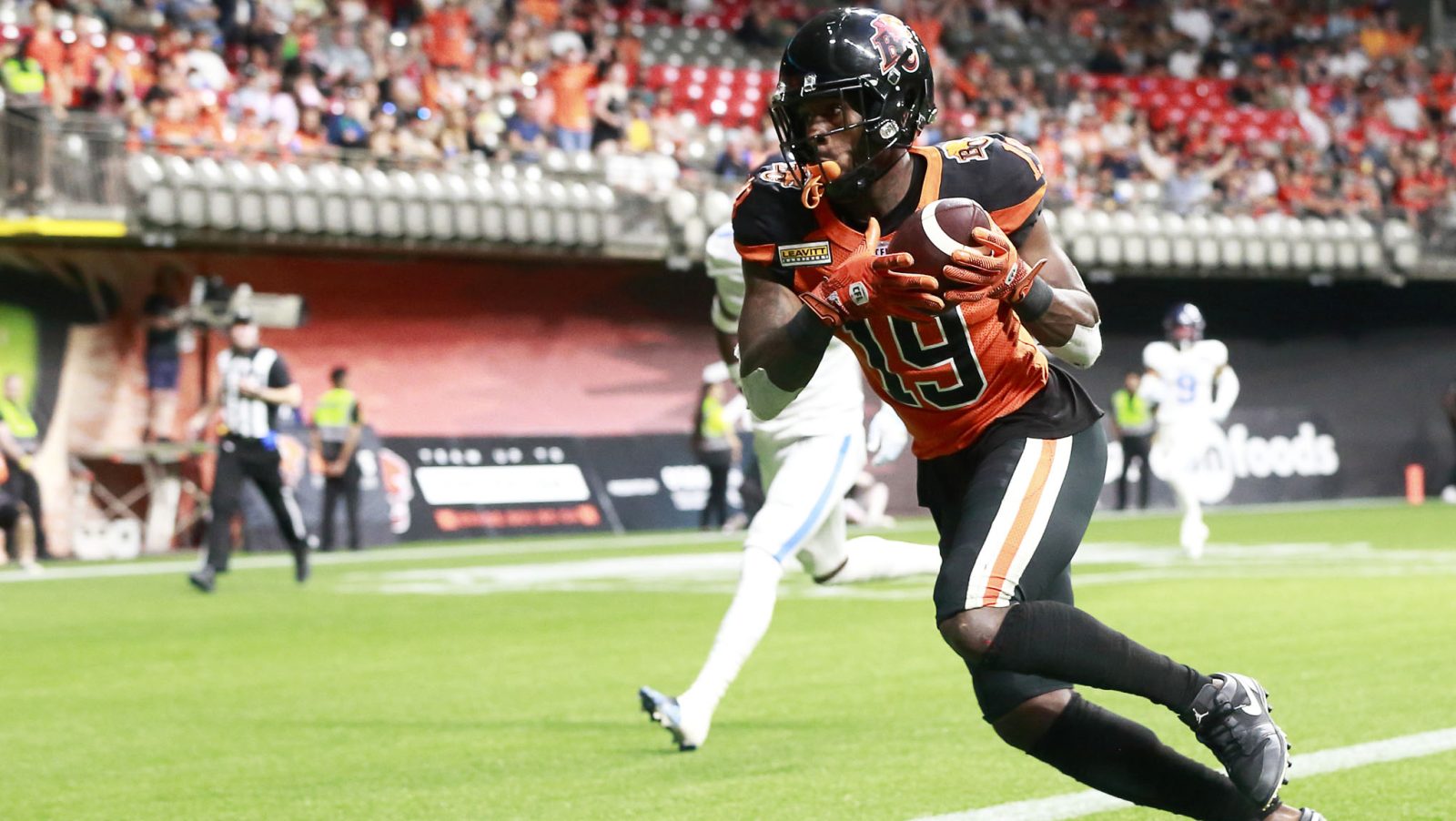 In his second season on the west coast, Dominique Rhymes is finding his rhythm with the BC Lions.

The long, lanky receiver from Miami caught all eight passes thrown his way for 143 yards and two touchdowns in the Lions 44-3 bulldozing of the Toronto Argonauts Saturday night. His first catch was a 46-yard grab in the opening  quarter that set up a field goal.

It was the first time in his five-year CFL career that Rhymes had two touchdowns in a game. It also was his second most receiving yards in a game behind the 168 yards on 11 catches in a game against Saskatchewan in June 2019.

Rhymes agrees it was a good night but wants more for himself.

“I can be tremendously better,” he said.

“I know what I’m capable of. I know when I’m fully healthy what I can produce for this team. I’m truly blessed to be in a good position on a great team.” 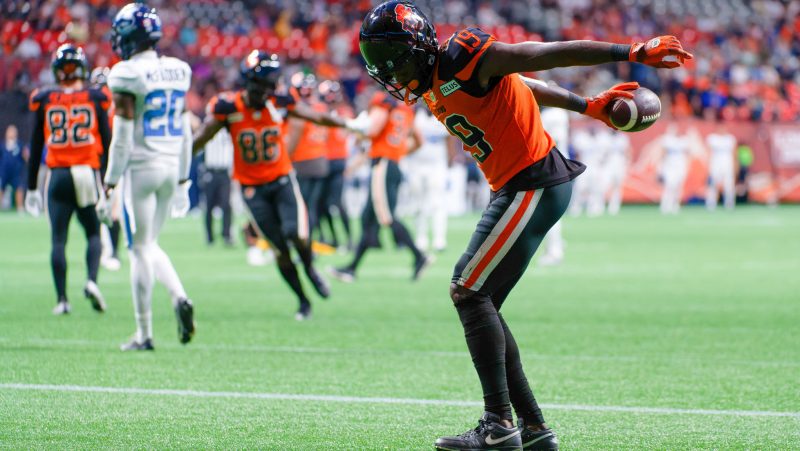 With so many offensive fireworks through their first two games, Rhymes and the BC Lions have had plenty of opportunities to celebrate (BCLions.com)

With all-star receiver Bryan Burnham sidelined by fractured ribs, Rhymes might be called on to do even more when the Lions face the Ottawa REDBLACKS at TD Place Thursday night.

“A couple of people went down but it just makes us stronger,” said Rhymes. “It just shows the versatility we have on offence. When one guy goes down…we want to make sure we all pick it up for it for him.”

After playing three years in Ottawa, Rhymes signed with the Lions as a free agent prior to the cancelled 2020 season.

In eight games in 2021 Rhymes had 45 catches for 411 yards and a touchdown before suffering a fractured foot. He had put together back-to-back 100-yard-plus games before his season ended but at times the 29-year-old looked like a square peg in a round hole.

One of the primary receivers while playing for the REDBLACKS, Rhymes found himself in a different role with the Lions. On a receiving corps stacked with players like Burnham, Lucky Whitehead, Keon Hatcher and Jevon Cottoy,  he didn’t always see the ball. Rhymes also found himself being used as a blocker.

“Last year with a new team, you’re just trying to find your place,” he said. “I feel it was an opportunity for me to learn a different position.

“I’m in a different role this year where I’m able to do more.”

Lions quarterback Nathan Rourke, whose 436 passing yards against Toronto was the most ever thrown by a Canadian in a single game, praised the demeanor Rhymes demonstrated last season.

“He’s such an unselfish guy,” said Rourke, who has thrown for 718 yards, a league-leading seven touchdowns and no interceptions in two games this year. “He came in last year, he was doing a lot of blocking. He took a backseat role. He was used to going in and making plays.

“There was no complaining, he didn’t pout or anything. This year he’s been asked to do something different, a little bit more close to his skill set. He’s embraced that.”

Besides his talent on the field, Rhymes adds leadership to the dressing room.

“He’s a guy that is never unwilling to make blocks or do anything for his teammates,” said Rourke. “He’s a great guy in the locker room.

“I’ll make a mistake in practice, or a mistake in the game, and he’s the first guy to say, ‘keep your head up.’ He been a blessing and he’s been a real leader in that receivers’ room as well.”

In watching Rourke, Rhymes sees a bright new star beginning to shine in the CFL.

“I see leadership, great grind,” said Rhymes. “His willingness to get better each and every day.

“He’s just pushing us to work even harder. Each and every day, the way he comes into work, it’s commendable because he wants to be great.”

Rick Campbell, the Lions’ head coach and co-general manager, coached Rhymes in Ottawa and knew what he would bring to the Lions.

“I have been with him since the beginning of his career and he just keeps getting better all the time. He’s a great teammate. I’m so happy he’s getting some recognition because he’s been a hard worker ever since he’s got into this league.”

The fractured foot was the first major injury of Rhymes’ career and it took six months to heal.

“I just kept my head down all off-season and kept grinding,” he said. “I knew it was going to eventually get better. By the time training camp came I had no pain and felt amazing.”

Rhymes also shed some weight over the winter.

Unlike some athletes, Rhymes can see the big picture instead of concentrating on his own statistics. He had just three catches for 30 yards in the Lions’ season-opening 59-15 demolition of the Edmonton Elks.

“Everyone was doing so well, I didn’t get a lot of catches,” he said.