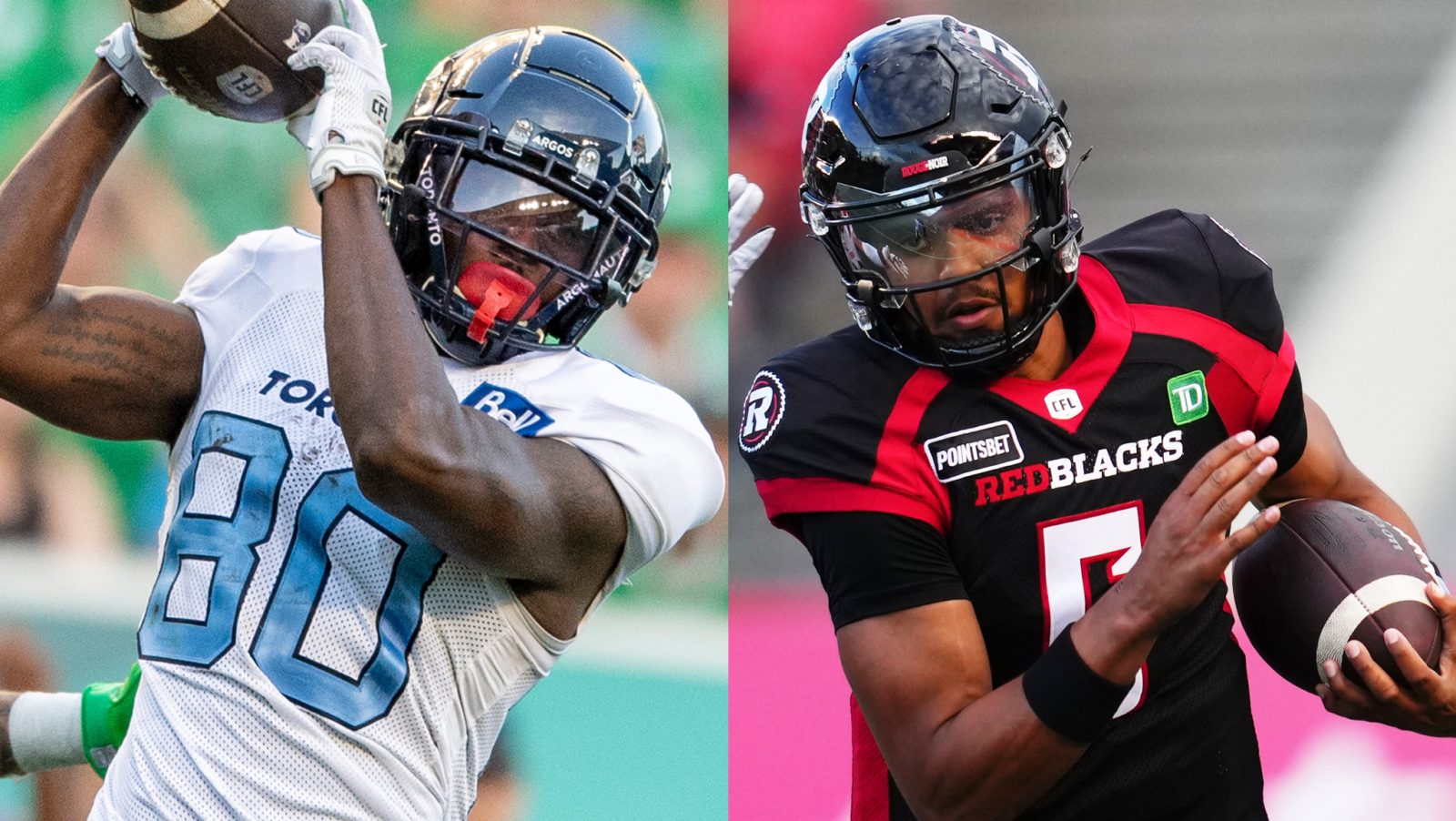 Can we have a moment of honesty to kickoff this column? Last week’s 31-21 win by the Toronto Argonauts over the Saskatchewan Roughriders was a gloriously goofy, sometimes infuriating football game that I could not keep my eyes off of.

On one side you had a Saskatchewan team dealing with COVID-19, multiple injuries and a fractured practice schedule. I don’t blame them at all for their troubles on offence with a rookie quarterback making his first ever start.

Then you had an Argonauts team that should have won that game handily but instead were trailing into the fourth quarter because of 10 penalties, five turnovers, two dropped interceptions, one missed field goal return touchdown allowed and a partridge in a pear tree!

RELATED
» Steinberg’s MMQB: The Hall of Fame can wait
» Buy Tickets: Ottawa at Toronto
» Power Rankings: Where did Toronto and Ottawa land?

As an Argonauts fan, I spent much of the game either yelling at my TV or staring blankly into the abyss wondering what was going on. I can’t think of a better way to end the week then with that Sunday night football game. Suddenly I found myself craving more Sunday night football and lookie-lookie we have another one coming up to conclude Week 8 with one of teams from last week’s game, Toronto, as they face the hard luck Ottawa REDBLACKS.

Allow me another piece of honesty; I am totally all right with Ottawa coming away with the victory. They began their 2022 campaign with three losses to the undefeated Winnipeg Blue Bombers (twice) and the explosive BC Lions. They were a couple yards short on a Lewis Ward field goal to beating the Hamilton Tiger-Cats and a Darvin Adams dropped pass in the end zone from tying the Montreal Alouettes last week.

By Sunday night maybe I will change my tune but as of now I believe the greatest 0-6 football team I have ever witnessed deserves a W. Beyond whoever wins or loses, what I’m really rooting for is another wild Sunday night extravaganza. I want this coming Sunday to look and feel the same way as last week. If you want responsible football played in a precise way with near perfect execution go watch Winnipeg take on Calgary the night before. But if a gallon of crazy in a half-gallon glass is what you are looking for, I suspect you’ll find it the next night. Here is what I am rooting to happen when these team’s kick it off at 5:00 p.m. ET at BMO Field.

Before the game starts, I’m going to need a 20-minute mini documentary on Ja’Gared Davis’ goal line tackle on Roughriders running back Frankie Hickson. Hickson was a butterfly’s eyelash away from reaching pay dirt that would have given the home side a 25-14 lead late in the third quarter. Instead, Davis held his ground, got low and like Gandalf in The Lord of the Kings bellowed out, “YOU SHALL NOT PASS” denying Saskatchewan a touchdown. The drive would stall soon after as the Riders were forced to kick a short field goal allowing Toronto to stay in the game. It was the sneaky big play of the game, the best tackle I have seen this year, and I believe it deserves at least 20 minutes of adulation. I’m guessing the entire province of Saskatchewan agrees. You should know I am very bad at guessing.

The only time I want to see either kicker Boris Bede or Lewis Ward on the field is if they are lining up for field goals that are minimum 55 yards in length or longer. Was it the best move for coach Ryan Dinwiddie to send out Bede at the end of the first half to attempt a 61-yard field goal? Probably not considering his kicker had never made one that long before. But you know what, I’m not here for the second guessing because from a pure entertainment factor that was absolutely the right call as it led to a super 112-yard missed field goal return from Mario Alford. Who doesn’t enjoy watching giant, gassed offensive linemen trying to catch someone who weighs as much as one of their thighs?

Speaking of decisions that are fun to second guess with the glory of hindsight, what was Ottawa doing kicking field goals from the eight and six-yard line last week! Did you know that every time a kicker attempts a field goal from inside their own 10-yard line a puppy stubs it’s paw? It’s true, you can look it up. We can debate if those kicks made sense from a coaching standpoint but both attempts were the exact opposite of fun.

I want third down conversions in the red zone. I want both coaching staffs to throw caution to the wind and go for it every time. In fact, why not leave Bede and Ward somewhere in between Ottawa and Toronto? How about somewhere in wine country in Prince Edward County? Let them sip on some delicious home-grown Pinot Noir as McLeod Bethel-Thompson slings one to DaVaris Daniels into a tight window on third and short or Jaelon Acklin doing Jaelon Acklin things in the back corner of the end zone.

This may sound odd for an article about extracting maximum fun on a Sunday night, but can we please have the running backs fully involved? Andrew Harris broke through the 10,000-yard career rushing barrier in style with 143 yards on 26 carries while William Powell had a season-high 17 carries last week. You’re looking at two elite backs who weigh a combined 426 pounds and clock in at a combined age of 69 years old. That sounds more like the age and weight of a 1980s WWE tag-team duo then the clash of CFL style running backs.

Also, I’m going to need a constant update about how many yards these two gain after contact. The eyeball test tells me that Harris collected about 142 of his 143 yards last week after contact. That is not meant as a slight to the Argonauts offensive line that did a splendid job, but rather it’s a tip of the cap of Harris’ ability to gain 3-4 extra yards when he has an entire defensive line draped on him.

To help even out the toughest drop of the season, I’m going to need Darvin Adams to race through the entire Toronto secondary, be so wide open in the end zone that he could do the electric slide and not hit a defensive back and catch the first touchdown of the game. Adams was a beast against the Alouettes but all we remember is that critical end of game drop. Let’s right the wrongs of cruel fate, give him an easy score to start the game and then a crazy, “how did he come down with that?!?” touchdown late.

Last Sunday night’s game was so compelling because it was this odd combination of frustrating mistakes all over the field mixed with so much drama and big plays. You know how there are ugly dogs that are also really cute, that was Toronto’s comeback 31-21 “triumph” over Saskatchewan. I just want that recreated this Sunday night to make me forget about the upcoming week and yes, I’m (kinda) rooting for Ottawa, that team is grossly overdue for a win.