Ferguson: Evaluating the quarterbacking from Week 14 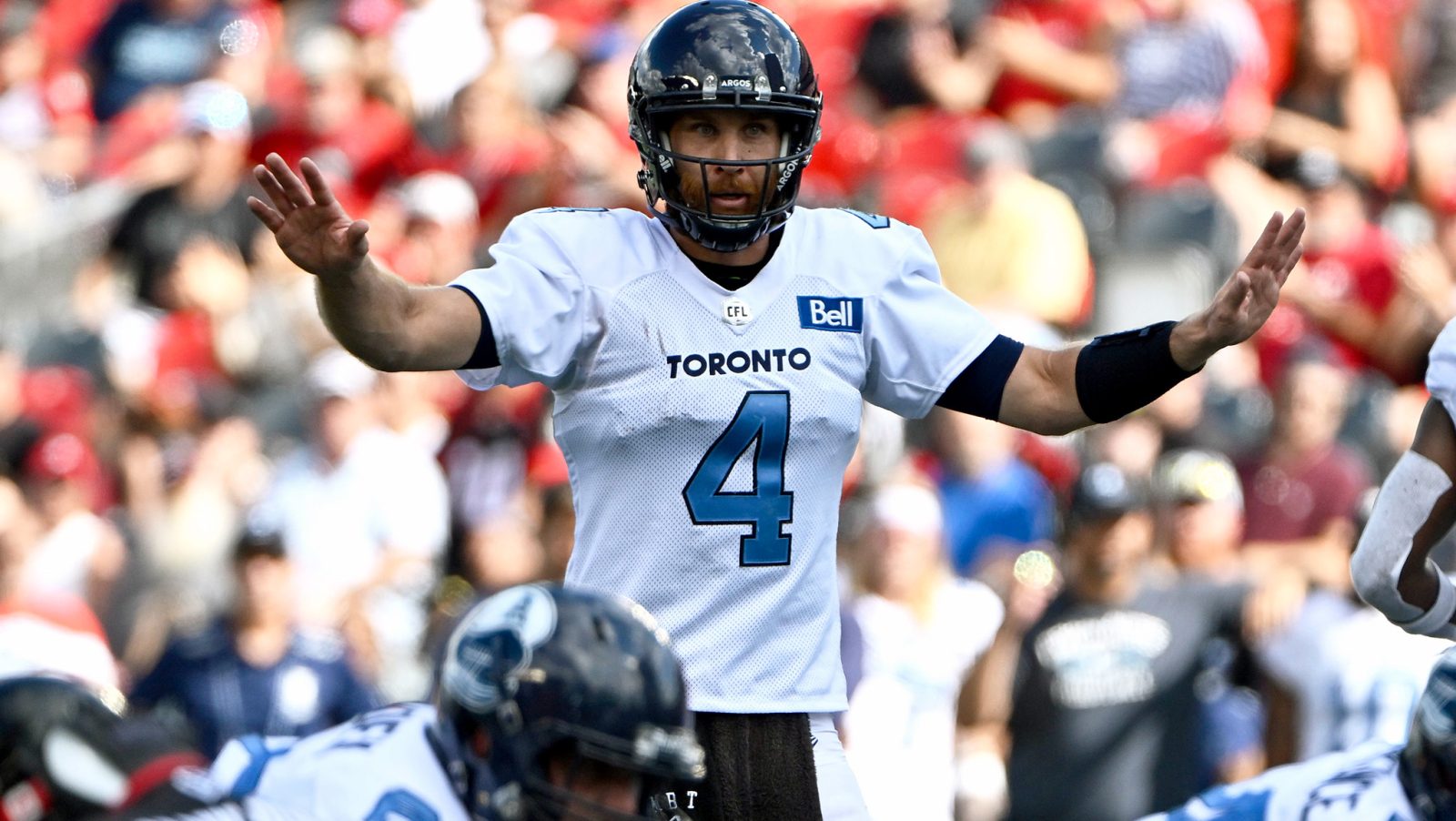 Ferguson: Evaluating the quarterbacking from Week 14

As we made the Labour Day turn, quarterback conversations around the CFL continue to evolve. Gone is the question of whether or not Trevor Harris will have to look over his shoulder at any point for Vernon Adams Jr. The Lions appear ready to re-launch their 2022 offence in the vision of Adams’ leadership after struggling through a pair of games since Nathan Rourke fell to injury.

Meanwhile in the East Division, everyone is waiting to see if Toronto Argonauts can play their way to the definitive first seed under McLeod Bethel-Thompson. Or if the Hamilton Tiger-Cats can mount a late season charge as Dane Evans returns from injury looking to topple either the Montreal Alouettes or Argonauts and prevent what feels like an inevitable West division crossover.

Let’s dive into the numbers and take a look at week 14 across the country.

RELATED
» CFL Fantasy Start vs. Sit: The week of the quarterback
» QB Index: A trio of plot twists in Week 15
» Weekly Predictor: Rolling with the Roughriders 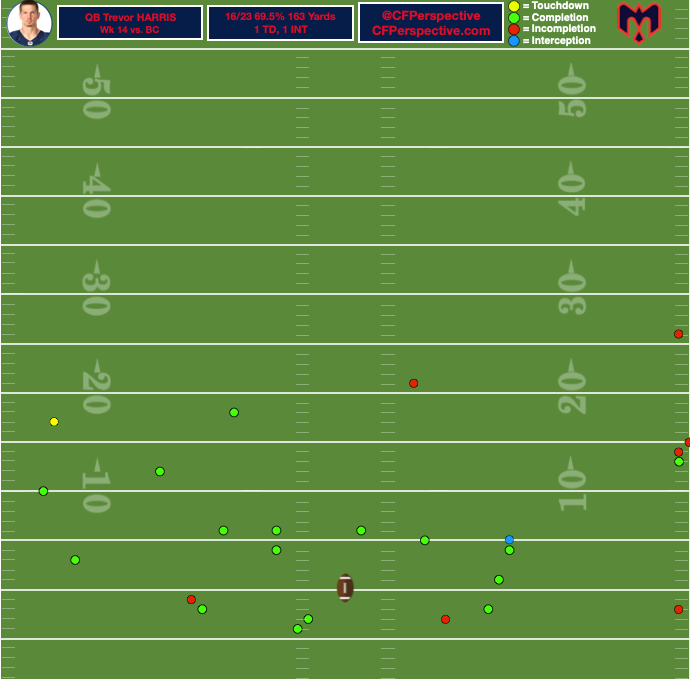 In what was hyped up as the potential return of BC’s Adams, it was Trevor Harris who put in a typical work shift down at Percival Molson Stadium.

Harris completed nearly 70 per cent of his attempts under the Friday night lights, including a couple of throws to Reggie White Jr. that left me wondering what the Als passing attack could look like over the next couple of months if they can find a consistent secondary receiving threat. 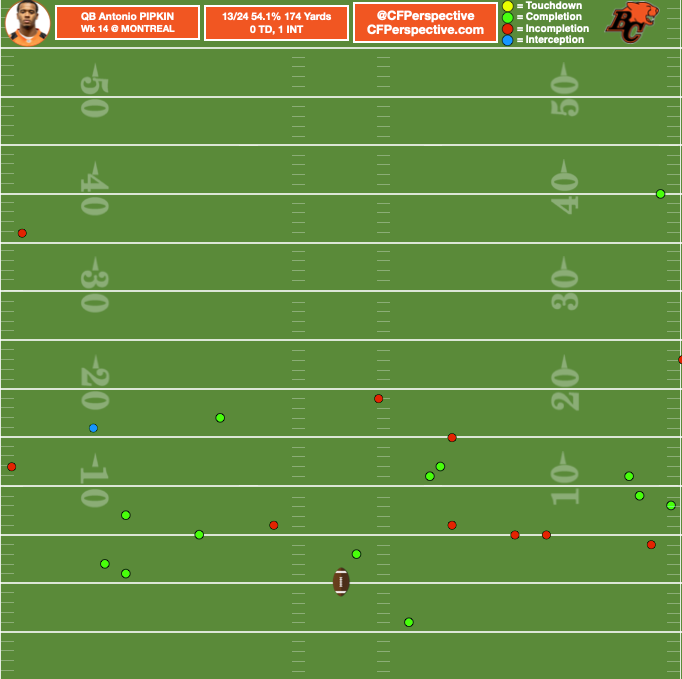 Despite the hype around Adams, it was Antonio Pipkin who would take 88 per cent of the passing attempts for BC in week 14.

The only deep completion from Pipkin came against soft coverage as the first half wound down. In the game against Montreal, Pipkin looked very much like the young quarterback who spent years in that same stadium trying to find his footing as a consistent CFL passer. 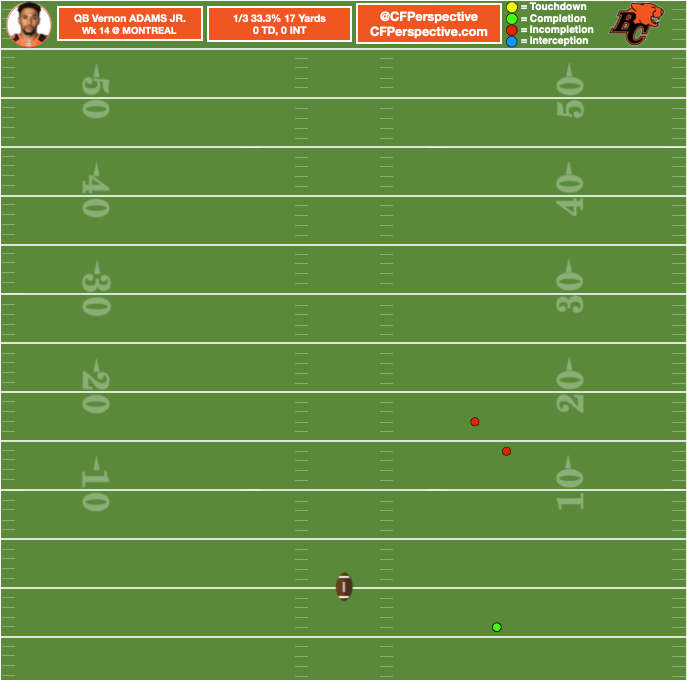 I probably didn’t need to put this together, but you get the idea. With Adams slated to start in Week 15 against Calgary this Saturday, BC will get their first real look at the quarterback they swapped for a first-round draft pick.

If it doesn’t look incredible right away don’t panic. The realist in all of us knows that there is work to do in order for BC to regain some of their explosive plays. I just hope they put the real, and often difficult work into making it happen and that they don’t pretend like everything is coming along perfectly. If there are struggles along the way as there is no shame in slowly easing in more plays for the new quarterback, instead of loading his plate and watching him run around off-schedule all night in desperation. 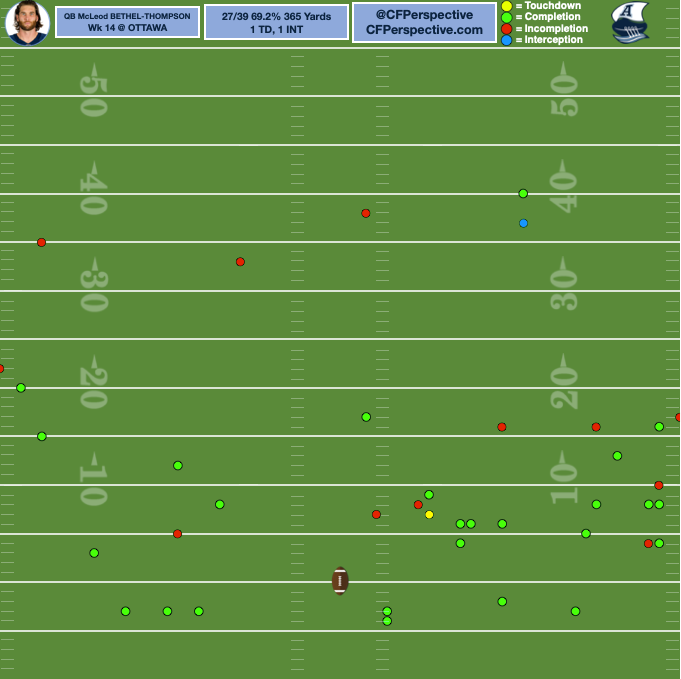 I had the pleasure of calling this game on Saturday. Many in the booth and our production truck weren’t thrilled with the excitement value of McLeod Bethel-Thompson‘s first half, but I was absolutely enthralled watching the chess pieces move around the field from the booth.

The Argonauts we clearly targeting REDBLACKS defensive back Brandin Dandridge in his CFL return, constantly putting him on an island as Bethel-Thompson worked his feet and eyes through progressions with the clear intention of getting to Banks as the eventual destination.

I thought Bethel-Thompson looked as under control and confident in the pocket in Ottawa as I’ve seen him all year. I firmly believe that if he can control second down with his eyes like he did against Ottawa through the remainder of the regular season that the Argos have a real shot to play in the Grey Cup. 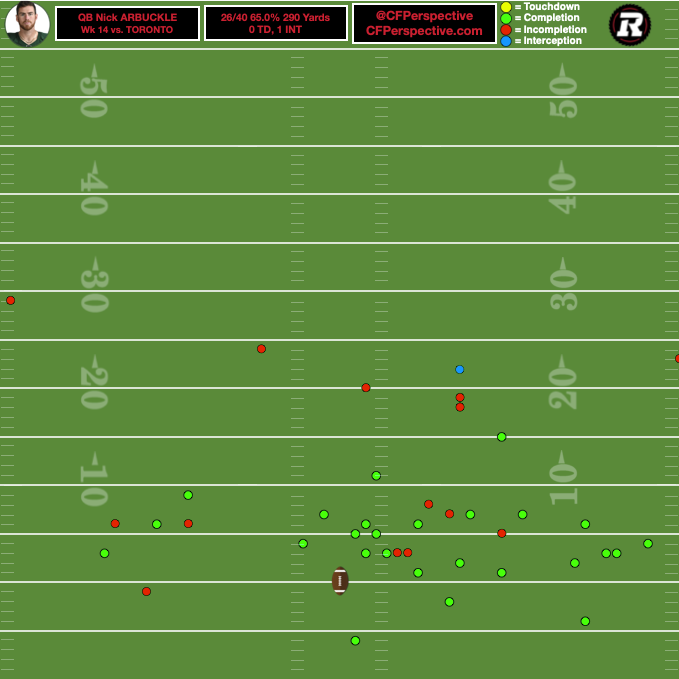 Nick Arbuckle missed a pair of deep shots to Jaelon Acklin as the REDBLACKS leading receiver was slow to get going in week 14.

With Toronto middle linebacker Henoc Muamba out of the game, the REDBLACKS consistently attacked the middle of the field in the game’s second half. This resulted in the tightly packed attempts under 10-yards in depth, as Arbuckle missed all seven attempts beyond 15-yards of depth and threw an interception. 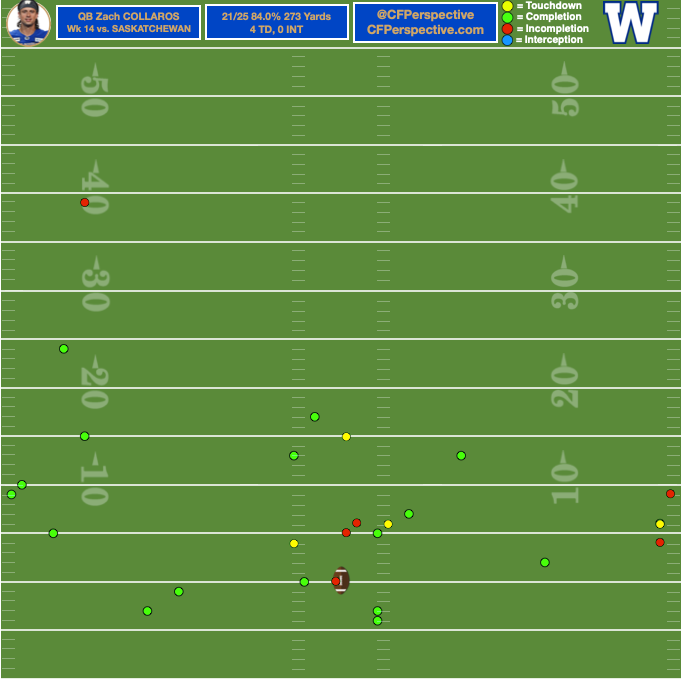 No Greg Ellingson? No problem.

Zach Collaros continues to chug along and is receiving support from an increasingly dangerous running game. Nic Demski has also been owning the middle of the field, a spot where Collaros is incredibly accurate. The Winnipeg quarterback is also aided by his innate ability to be constantly shifting around in the pocket to buy time and find unique arm angles to deliver from. 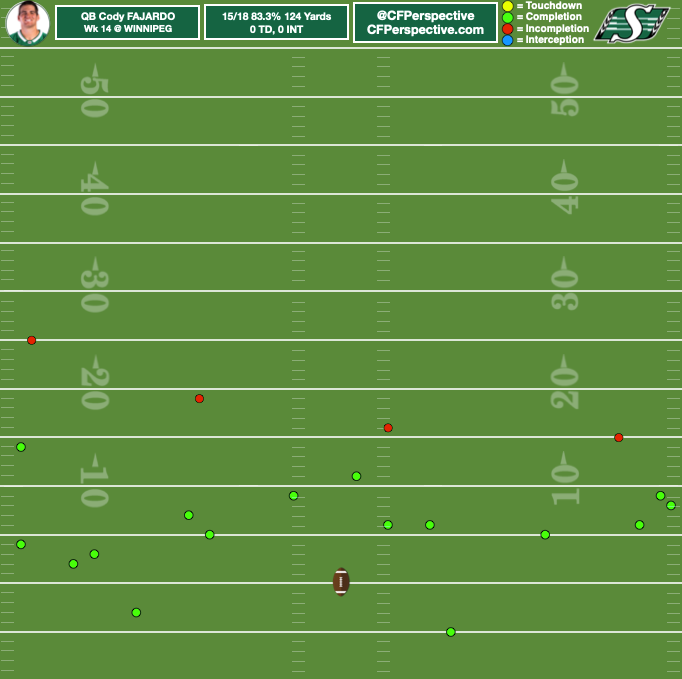 While completing nearly 85 per cent of his passes, the four incompletions and relative lack of a vertical threat due to consistent pressure from the Bombers pass rush speak volumes here.

Cody Fajardo was forced to earn most of his completions and did well to work through the intermediate window throws between caps in zone coverage. Unfortunately for Fajardo the four touchdowns from his counterpart in Winnipeg’s Zach Collaros just couldn’t be matched as he and the Riders dropped their sixth consecutive game to the Blue and Gold. 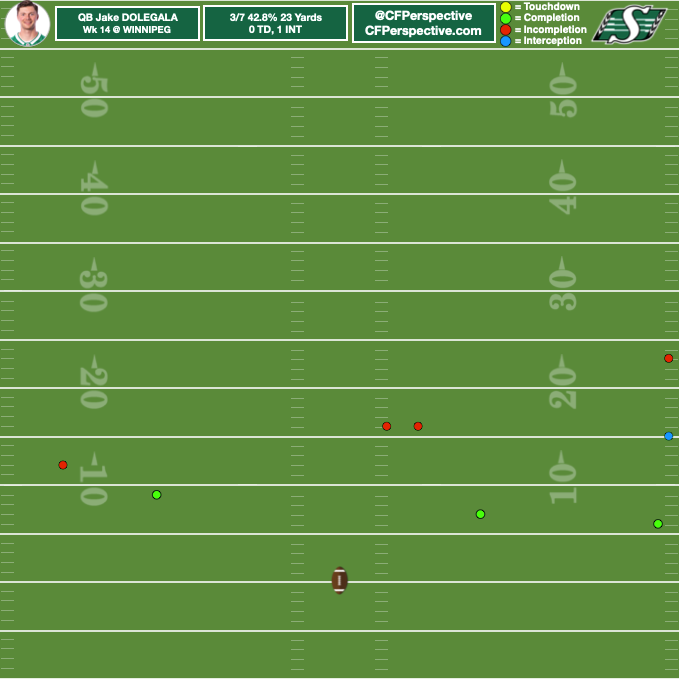 It was cleanup duty, but nice to see Jake Dolegala get a couple reps for the first time since serving as emergency starter for Saskatchewan in Week 7 against Toronto. 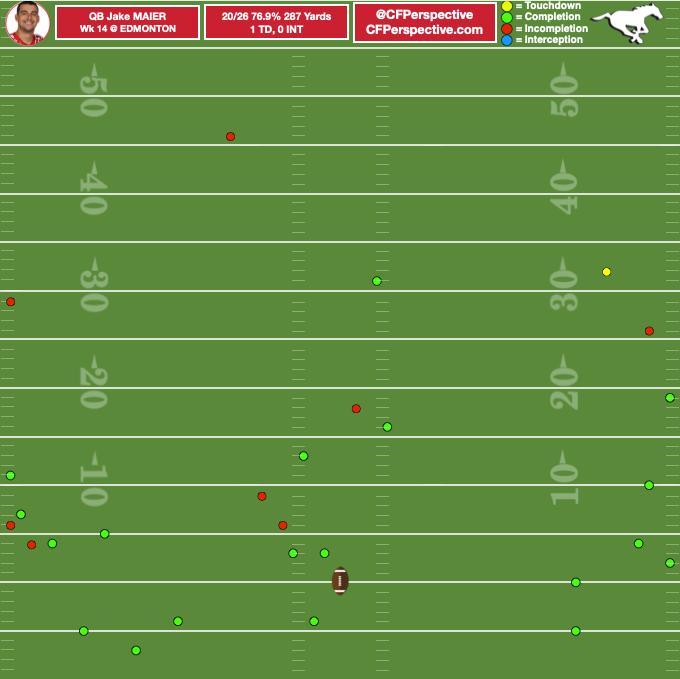 After a relatively rough first half on Labour Day, Jake Maier has since put together three solid halves of football for the Stampeders.

Each week his comfort level with receiver Malik Henry seems to improve and the Stampeders’ crucial use of their running backs as pass catchers is really coming to life. It’s become noticeable that Maier is thinking less, and processing quicker within the team’s first down base offence. 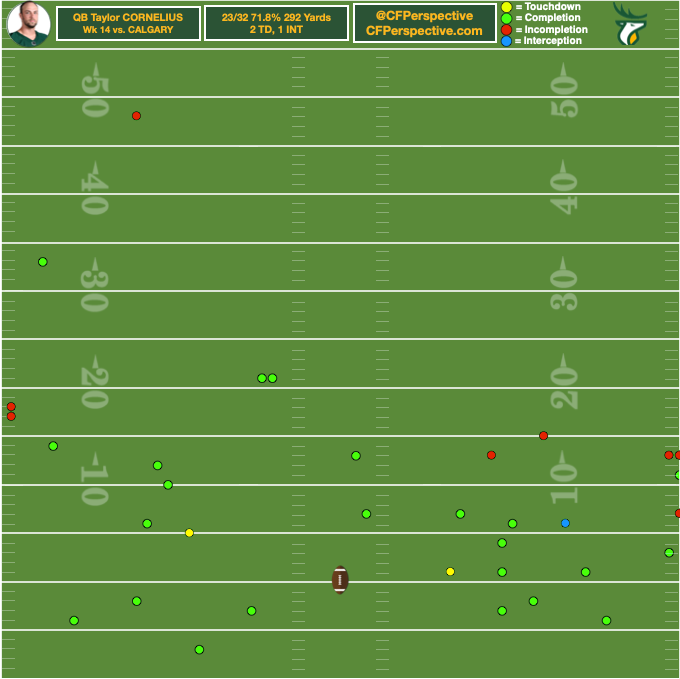 I have been intrigued by Taylor Cornelius for a couple weeks now. This past week’s 71 per cent completion rate and performance only added to that intrigue.

Cornelius he threw a bad interception early in the game, that gave their provincial rivals all the momentum, but he answered right back with a pair of touchdown strikes and an 11-yard jaunt into the end zone.

For better or worse, there is plenty of film for Edmonton to evaluate Cornelius on going into 2023.