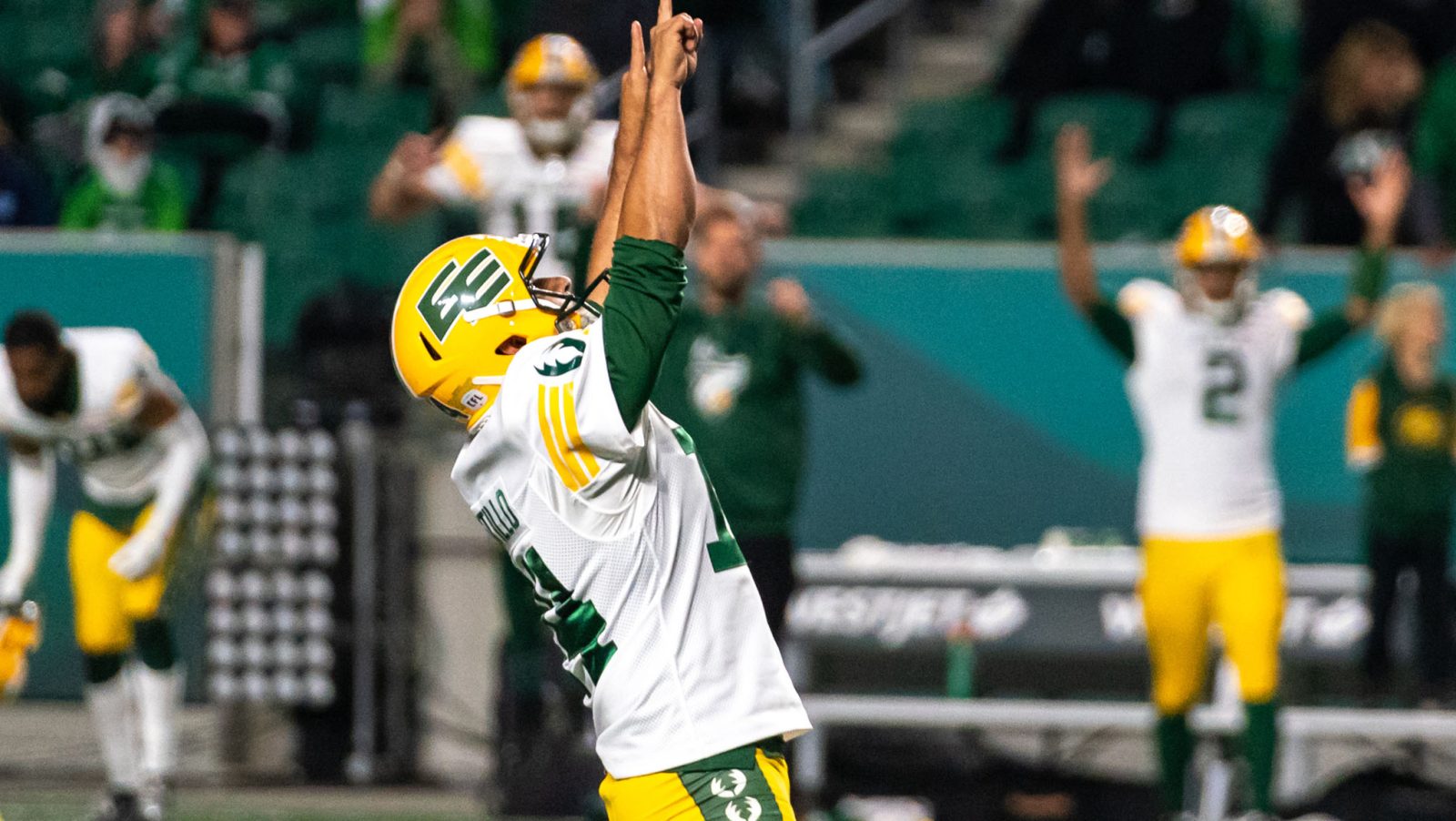 Hello, Hamilton Ticats. Where have you been all summer? And more importantly, what did you do/eat/listen to/read/ during your bye week? Find a way to bottle all that.

Slap a label on it and give it a catchy name and you’ll sell millions. ‘Coach O’s Old-Timey Turnaround Tonic.’

Here are the Week 15 takeaways.

HE’S GONNA BE A TOP PERFORMER OF THE WEEK. SHOULDN’T SHE BE TOO?

Take a bow, Dr. Carla Edwards. I mean, the hero of the day made a point of thanking you in his post-game interview, didn’t he?

Hamilton quarterback Dane Evans turned his personally dismal 2022 season around on Saturday, bursting from the muck just like John Goodman’s prison break in Raising Arizona. Evans’ equivalent of Goodman’s full-throated howl at the heavens was a 327 yard, five touchdown pass performance, with zero turnovers. In fact, Evans may have helped deny a turnover on the drive that sealed the win, late in the fourth quarter, when he went high to snare an errant snap, turning possible disaster instead into a continuing drive, which he capped with an absolutely gorgeous drop-in throw to receiver David Ungerer for a touchdown.

Afterwards, Evans thanked his teammates, including Dr. Edwards, whom you may not have known about prior to Saturday.

“I definitely couldn’t have done it without Dr. Carla Edwards,” Evans told TSN.

Edwards is the Ticats’ team sports psychiatrist, and she heads up the Synergy Sport and Mental Health clinic in Guelph, Ont., working not only with the Ticats but with organizations like Swimming Canada and Cycling Canada, to name a couple. She and Evans have been working on things, apparently, and it looks to this untrained eye that they had a bit of a breakthrough recently.

“I think it obviously helped me,” said Evans of his relationship with Dr. Edwards.

“I’m excited to get to talk to her after something good, finally, has happened as opposed to what I have been talking to her about,” he added.

Enjoy that upcoming session, Doc, as well as the longer line you’re now liable to see outside your office, like you’re not already busy enough.

UP AHEAD IN THE DISTANCE THEY SAW A SHIMMERING LIGHT

The Edmonton Elks got a big win in Regina on Friday night and afterward, when they squinted their eyes and gazed at the far off horizon they saw the glow of Saskatchewan’s tail lights, and the feeling that maybe there’s a chance. “Now we get to go into the bye week with some hope,” said kicker Sergio Castillo after the win.

The Elks are alive and have a growing sense of camaraderie and optimism, with a congealing defence and rising stars on offence fuelling a surge. That surge might be coming too late to get them into the playoff picture but if they do fall short they’ll have the next best thing and that is unbridled off-season optimism and a real sense that the arrow is pointing up.

Next up for the Elks is a crucial home game against the Montreal Alouettes, on October 1. With 14 straight losses at Commonwealth, whatever their playoff fates, Edmonton needs to show the home crowd a good time. “We’ve won four dadgum games, all of ‘em on the road,” moaned Jones. “It’s so unfortunate that we play better football – for whatever
reason – on the road than we do at home.”

BONUS TAKEAWAY: My spellcheck doesn’t like the way I spelled ‘dadgum’ in that takeaway but it offered no alternative spelling so spellcheck can bloody well take a seat.

This past week gave us a rather rude reminder to not be so sure of things about which we’re feeling absolutely certain.

Winnipeg will crush the floundering Ticats. Rene Paredes will not miss with the game-winning boot on his toe. The Elks are doomed to lose because they don’t win in Saskatchewan. Better Call Saul will sweep the Emmys, finally, deservedly.

Well guess what? The Ticats showed us “that’s why they play the games,” Paredes showed he’s human and the Elks showed they can indeed exit Saskatchewan with smiles on their faces. And Bob Odenkirk and Rhea Seehorn are inexplicably left high and dry again by the television academy.

I’ll say this about the Blue Bombers/Ticats game. It took two to tango. Not only did the Ticats come up with their best performance of the season on Saturday, the Blue Bombers came up with likely their worst, and yet still they looked like they might climb all the way back until Evans and company mounted a superb, late fourth quarter drive to put it away.

BONUS TAKEAWAY: I think both Mike O’Shea and Orlondo Steinauer got the messages they needed at this moment for each of their teams. For O’Shea, his dominant crew gets a reminder that they cannot merely show up, always a good refresher course for a team to get, unless they get it in the playoffs or on Grey Cup Sunday. For Steinauer, his team absolutely needed the belief that they can be a toe-to-toe worthy adversary for anyone and they certainly got that message ahead of a gigantic game with the Alouettes this Friday.

The Calgary Stampeders are still in search of that little extra something. What it is, exactly, might be hard to pinpoint, at least for the head coach.

“I’m at a loss for words,” said Dave Dickenson after Saturday’s overtime loss to BC. “We just seem to sometimes, when we get into that moment, we’re not at our best. We do make a lot of good plays. We’re right there.”

Right there but not quite over the hump. Five losses this season and each and every one of them to either the Winnipeg Blue Bombers (three) or BC Lions (two). Two losses by seven points. Two by two points. One by one point. So close, so tantalizingly close. Is this a victory which they see before them? Come, let the Calgary Stampeders clutch thee.

BONUS TAKEAWAY: Dickenson has had it with Calgary penalties, especially on special teams. So much so that he has decided to forego kick-off returns after an opponent’s successful field goal. “I wanna take kick returns,” Dickenson said, scornfully. “But when you’re taking so many penalties, why? Let’s take the ball at the 40.”

GO FIGURE THE MYSTERIOUS AERODYNAMICS OF A TUMBLING FOOTBALL

Elks’ kicker Sergio Castillo is not one to shrug his shoulders after missing a field goal, not even in these late stages of his illustrious career. When he clanked an earlier attempt off an upright against Saskatchewan, he took information from the miss as he was preparing for his game-winning, 47-yard field goal. “You have to,” said Castillo afterward.

He knew he’d have the distance in his pocket and he knew he had to adjust the mechanics on his attempt, because things weren’t smooth.

The thing is, learning your lessons doesn’t necessarily help when you’re having an off-day. “Today I had a ‘B’ ball type of day,” said Castillo, who then admitted that he chunked the winner. “When I kicked it I mis-hit it,” he said. “I didn’t hit it good. And I thought it was gonna hook.”

When you see the replay of the kick from behind Castillo, it certainly does look like it is corkscrewing, hopelessly, very much wide of the left upright. But then, for some reason, the ball just starts to change direction and it veers back in towards the middle of the intended target in the greatest mid-course flight correction since Apollo 13.

“Fortunately that thing went left and then it came right,” said a delighted Castillo, rocking his body one way and then the other as he described the crazy trajectory.

If he could throw a baseball like that we’d have never seen him in pro football but we would be seeing him in Cooperstown.

AND FINALLY… A hurdle and then a straight arm? Just one Ka’Deem Carey run can form the basis of an entire Marvel Universe movie.