Numbers Don’t Lie: 3 Stats that could define the Western Semi-Final

Numbers Don’t Lie: 3 Stats that could define the Western Semi-Final

TORONTO — Sunday’s Western Semi-Final between the BC Lions and the Calgary Stampeders will feature a heavy-weight bought between two West Division opponents that have gone toe-to-toe in a handful of close matchups this season.

The Stamps and Lions are similar in many ways, each boasting efficient passers at the quarterback position, electrifying playmakers at receiver and powerful running backs in their backfield. There are also a few differences that could tip the scales in favour of either team come Sunday. CFL.ca takes a look at three stats that could potentially define the Western Semi-Final.

6.4 – yards per carry in the Calgary backfield

It’s no secret that the Stampeders have boasted one of the most prolific running games through the 2022 regular season, but that doesn’t make what they have been doing any less impressive. As a unit the Stampeders have gained 2,436 yards on the ground and have scored 24 rushing majors this season.

What’s more impressive is the efficiency with which they have been able to run the ball, approaching Sunday’s Western Semi-Final the Stamps currently average a league-high 135.5 rush yards per game, while averaging an eye-popping 6.4 yards per carry.

The team has been led by Ka’Deem Carey who finished the season as the league’s leading rusher with 1,088 yards and 10 touchdowns. Ball-carrying duties have been dominated by Carey, and for good reason, the Calgary back is averaging 6.6 yards per carry and has produced 38 carries of 10 or more yards and 11 carries of 20 or more yards.

However, Carey isn’t the only Stampeders running back who has shown the ability to gash defences on the ground. Dedrick Mills and Peyton Logan have each shown flashes of brilliance through the regular season. Mills is averaging 6.9 yards per carry on 67 rushing attempts and has broken free for 16 runs of over 10 yards, while Logan has averaged 6.3 yards on the ground, with 14 rushes of 10 or more yards.

Calgary’s ability to work the ground game isn’t exclusive to their running back room either. While he has mostly been a short-yardage specialist, quarterback Tommy Stevens put the league on notice with an incredible performance in the final week of the regular season, rushing for over 160 yards on four carries in Week 21.

Much like Eugene Lewis felt obvious in the three stats that could define the Eastern Semi-Final, Nathan Rourke feels almost too obvious here. However, the poise, leadership and talent of Rourke should not be overlooked or understated.

Before the foot injury that sidelined him in Week 11, the Lions were 8-1 with Rourke leading their offence. What stood out the most about the incredible start to the season for the young signal caller, was the efficiency with which he has been able to manage the game. Rourke finished the 2022 regular season completing 78.7 per cent of his passes, besting the 77.3 per cent mark set by none other than Ricky Ray in 2013.

Through 10 appearances the BC pivot completed 255 of his 324 attempts, throwing for 3,349 yards and finished the regular season with 25 touchdowns. While the numbers are impressive, it has been his ability to remain calm in the face of adversity that is one of the young quarterback’s most astounding traits. Through the first 11 weeks of the regular season Rourke had five outings where he was responsible for throwing multiple interceptions in the game. Instead of dwelling on his mistakes Rourke corrected them, allowing only one loss in his five multi-interception games. 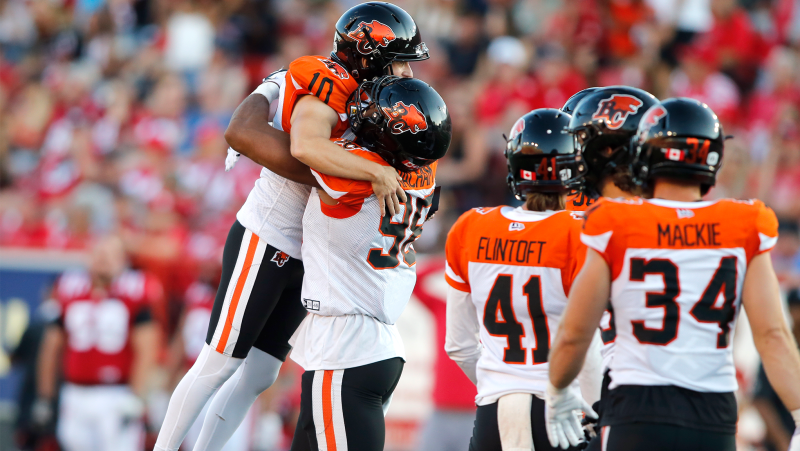 BC Lions kicker Sean Whyte has connected on 36 field goal attempts through the 2022 season, 21 of his he converted from 30 yards or longer (The Canadian Press).

Earlier in the week, Marshall Ferguson made note of the iconic kicking matchup that will take place during Sunday’s Western Semi-Final, saying it might not get much love. Well, we’re here to shine light on two of the most prolific kickers of the 2022 regular season.

Each of Calgary’s Rene Paredes and BC’s Sean Whyte rank among the top of the league in field goal percentage, and could certainly be the deciding factor come Sunday.

Paredes has been the benchmark for kicking excellency seemingly since he entered the league. In 2022 the veteran kicker continued that trend as he converted a league-high 54 field goals. Paredes made 90 per cent of his kicks this season, splitting the uprights on 35 attempts from 30 yards or more, while scoring 210 of his team’s 497 points this season.

On the opposing sideline, Whyte has been equally impressive through the regular season, missing on just three of his 39 attempts for BC this year, converting a league-high 92.3 per cent of his attempts. The BC kicker has proved integral to the success of his team, with seven games where he has made at least three field goals. In those games, the Lions hold a record of 5-2 and Whyte helped lift BC to two wins over the Stamps, including a 41-40 win in Week 10 which saw Whyte hit a game-winning 25-yard field goal.