Fire And Ice: Bethel-Thompson touches down at GC109 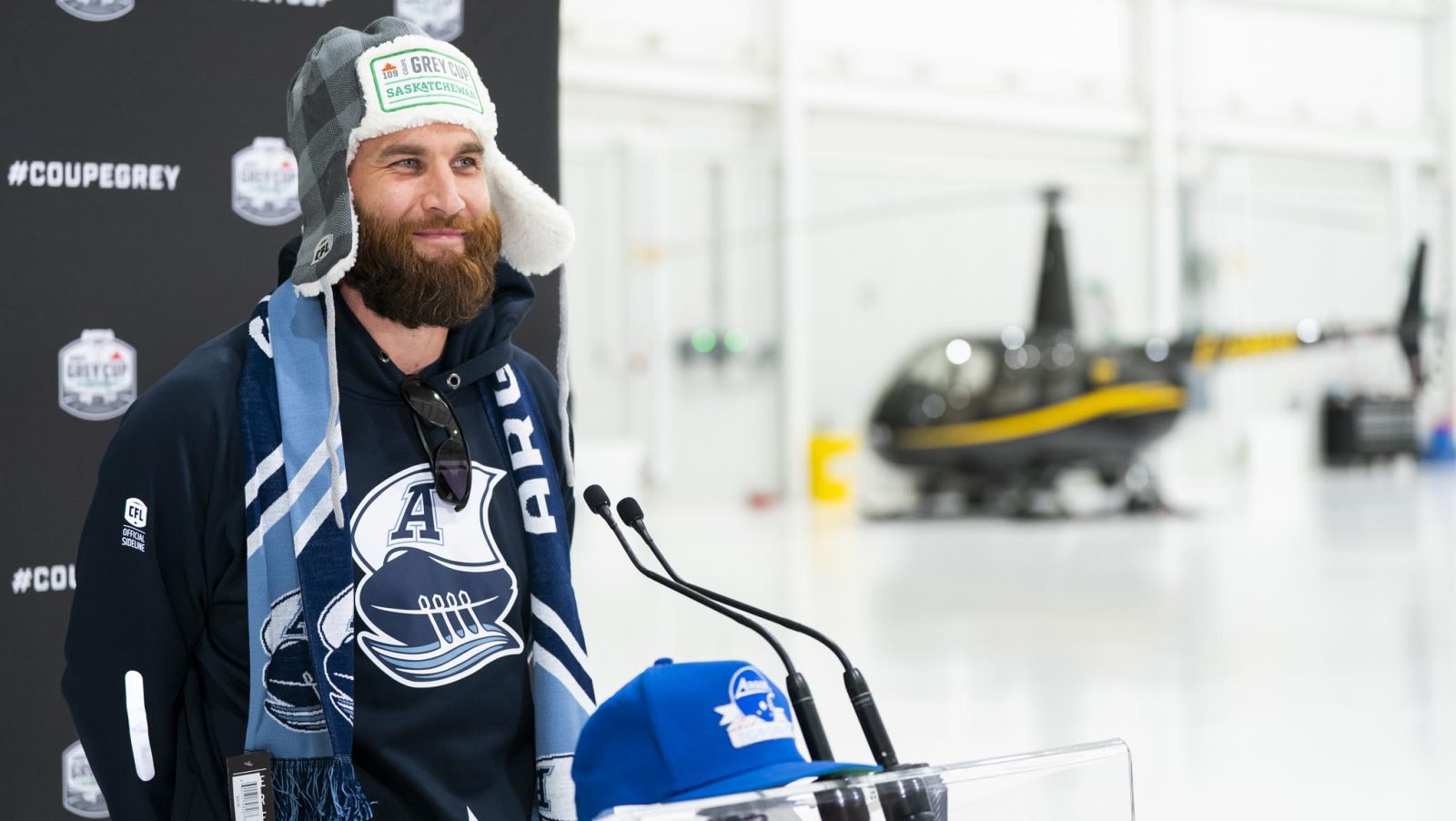 Fire And Ice: Bethel-Thompson touches down at GC109

REGINA — McLeod Bethel-Thompson opened his Grey Cup week with an apology while unapologetically being himself.

The Toronto Argonauts’ quarterback admitted on Tuesday that he got a little too heated on the sidelines of Sunday’s Eastern Final when he insisted on the team’s coaching staff challenging a play. Head coach Ryan Dinwiddie chose not to and let’s say that an animated conversation followed.

“I apologized to him. I shouldn’t have lost my temper,” Bethel-Thompson told reporters after he’d stepped off his team’s charter flight to Regina, ahead of Sunday’s 109th Grey Cup.

“I think it’s something we bond over, we’re both passionate people. We both love the game of football, we have that fire in us. I apologized to him the next day, it was uncalled for. I felt like we moved the ball and wanted a challenge. He knew better. I have complete confidence in him and it was my fault.”

109th Grey Cup
» Argonauts, Blue Bombers to compete for 109th Grey Cup
» Welcome to GC109: The Grey Cup trophy arrives in Saskatchewan
» Argos punch ticket to Grey Cup with win over Alouettes
» Head To Head: Who has the advantage in the Grey Cup?

Through the Lens: Argos Arrive in Regina in style

“We’re good. We get along great,” the coach said.

“There’s going to be moments. We’re both competitors and I’m sure we’ve said things to each other that the other guy might not like at times, but that’s just what it is. I know he wanted us to challenge. He felt like we were going and getting in the rhythm, but it wasn’t the right thing to do. So it didn’t bother me none and I know he wanted to (challenge). That’s part of the game, but we’re fine.”

The Argos landed here on Tuesday afternoon, making their first Grey Cup appearance since 2017. Bethel-Thompson was in his first year in the CFL back then, serving as a backup behind Ricky Ray on what turned out to be a championship squad.

Few people knew about Bethel-Thompson then. He suited up in six games that season and threw two passes for just 10 yards. Five years later, the journeyman pivot that felt the pain of being released 11 times through stints in the NFL and various other American leagues before coming to the CFL has found a home in Toronto. Named the team’s starter midway through 2021, Bethel-Thompson is now a two-time East Division All-Star. He led the league in passing this season with 4,731 yards and was third in touchdowns thrown, with 23.

With a vintage Argos hat placed delicately at the podium he spoke at, Bethel-Thompson made it clear he knows what’s at stake for his team and himself this week.

“For sure it’d be vindication. Quarterbacks are measured by championships. I consider myself a good quarterback…I guess you could say I’m excited more than anything. I don’t think of legacy, I don’t think of anything long term. The reward for hard work is more hard work so I get to watch film and play a football game. That’s the most exciting part.”

In a season where we’ve seen the likes of Nathan Rourke and Jake Maier assume starting duties and excel at a young age, Bethel-Thompson’s path to this point has been anything but a simple A to B trek. Through his five years as an Argo he’s shown flashes of brilliance, only to land behind other quarterbacks at the start of a training camp. He’s been counted out and sometimes seemed on the verge of being cut but has outlasted everyone, climbing up every depth chart, gradually becoming the bearded face that steers the Boatmen.

“I think he’s playing well. I think he took the next step,” said Dinwiddie, who is in his second year as Bethel-Thompson’s head coach.

“He’s obviously proven that he can get us to the Grey Cup. Now he’s got to prove that he can be a Grey Cup quarterback. I know he wants to win this one for his legacy but he just wants to win for the club and for his teammates. He’s played well this year. I think in his second year in the offence you can see that.

“I’m excited for him. He’s been working hard to get us to this stage. He deserves it and he got us here.”

It may be a snowy, slightly frosty stage that he’s on this week, but it’s a tremendous one. Bethel-Thompson and the Argos will try to break up the Winnipeg Blue Bombers’ bid for the first three-peat Grey Cup run that the CFL has seen in 42 years. He and Dinwiddie admitted that the task in front of them on Sunday is a daunting one, but it’s one they’ll embrace.

“The whole reason to play football at this time (of year) is to play against the best. The last few years they’ve been the best in the league. That’s why we’re here. We want to play the best players on the biggest stage at their best and beat them. That’s what we feel like we’re ready for.”