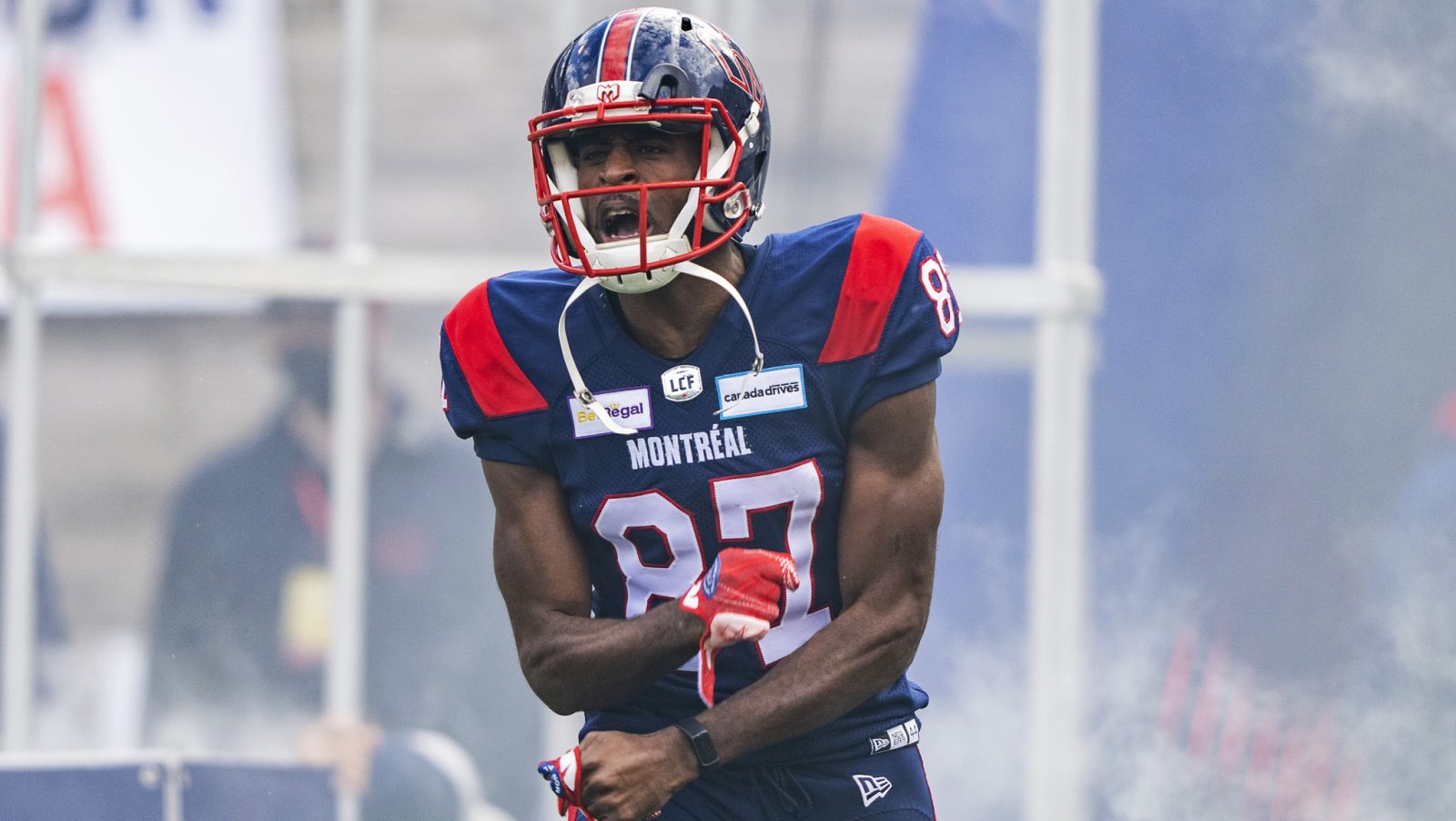 As CFL Free Agency nears, the most interesting conversation – outside of quarterbacks – is often those on the receiving end of the offensive equation.

Pass-catchers are diverse in their size, style, and ability, which makes finding the right fit and, most importantly, combination of fits imperative to offensive success.

Before we head down matchmakers lane and rank the top-20 available receivers this year, let’s take a trip back in time to December of 2021 when I broke down the 2022 free agent receiver class. 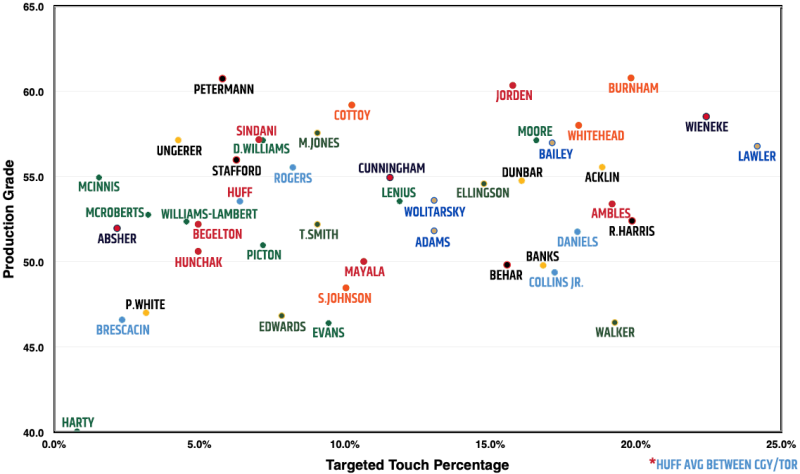 Dan Petermann (signed with the BC Lions) was the most productive and underused Canadian receiver before having just one catch for five yards this season in a stacked Lions pass-catching group.

Kamar Jorden was one of the hottest receivers on the market going into last year, making for a stunning drop off this season as he once again may hit the open market, more likely than ever before to exit Calgary as Malik Henry and Reggie Begelton assumed stat stuffer status for the Stampeders.

‘Touchdown Jake’ Wieneke was arguably the second most attractive receiving option on the board behind Jaelon Acklin or Kenny Lawler, both of whom would change postal codes and have successful seasons for struggling teams in Ottawa and Edmonton, respectively.

Each year there are those who rise above expectation, and others who struggle to reproduce their previous success. The free agency receiver market is all about fit, system, position, and most importantly, quarterback.

All of which makes 2023 a fun study to project ahead of signings flooding your timeline. 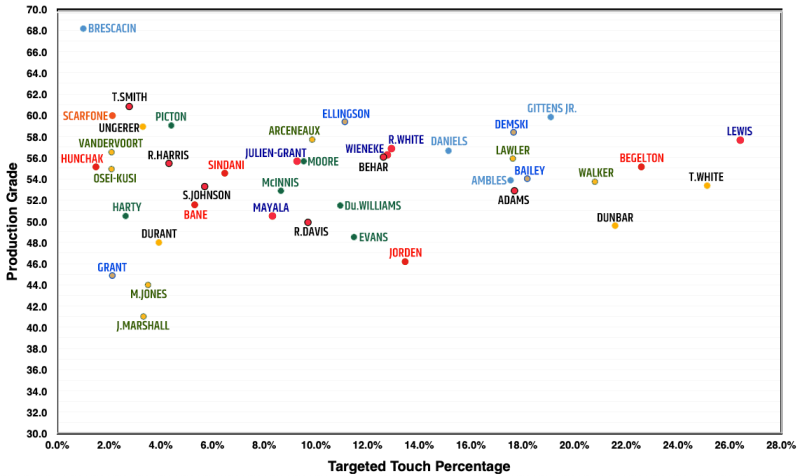 With this as background education, it’s time to rank the top-20 available pass-catchers who are pending free agents across the CFL.

20. Juwan Brescacin
Hampered by injuries, Brescacin played a limited role in 2022 but in back-to-back seasons has maximized his touches in Toronto while never breaking through to carry the load in a significant way. The market is all above tapping unused potential. Brescacin will never be a 100-catch guy, but could be a stellar third option in say, Hamilton?

19. Tevaun Smith
The former first round pick stumbled out of Edmonton and quietly landed in Ottawa where I didn’t think much of the move until he started making play, after play, after play. I have to believe his stock this winter is as high as it’s been in a couple years.

T-18. Darvin Adams / Manny Arceaneaux
Shoutout to the old heads! Both Adams and Arceneaux held it down for the veterans in 2022 with Manny nearly having the same effect in Edmonton as Greg Ellingson did in Winnipeg – albeit due to injury. Regardless, I could have never predicted that and if your room needs a leadership boost, these are the first two names you’re calling.

17. Nate Behar
In 2022 Behar got his first career touchdown, patented a first down celebration, and earned a multitude of fans for speaking honestly about Jeremiah Masoli’s injury. He’s one of the truly smart and well-liked players in the CFL, regardless of position or nationality.

16. Jake Wieneke
Wieneke had a slow 2023 season, his touchdown in the Eastern Semi-Final brought back memories of score zone dominance from the previous season, and I expect Ottawa to search out his services as they did last winter in hopes of improving Jeremiah Masoli’s early season struggles inside the 30-yard-line.

15. Duke Williams
Williams has elite size and jump ball ability. The question after his ultra disappointing 2022 is whether the Riders can spend big at receiver before knowing who their quarterback, or offensive coordinator, is.

14. Kaion Julien-Grant
Julien-Grant is quick, elusive, and ready-made for any scheme. While profiting off the Montreal quick screen game in 2022, I don’t believe he’s limited to that, and could find an expanded role elsewhere to great profit in 2023 and beyond.

13. Reggie White Jr.
Despite finishing the season injured, White assumed Jake Wieneke’s 2022 role of Robin to Geno Lewis’ Batman and was setting himself up for a possible leap to top dog somewhere else this winter. I believe he remains one of the best secondary options on the market this year and should have no fewer than a handful of offers if Montreal lets him see what is possible.

12. Markeith Ambles
Ambles is a catcher of quick screens, physical beyond his size, and has plenty of CFL experience. He’s is a reigning Grey Cup champion and a top tier support receiver capable of adapting quickly to perhaps a Pete Costanza-led Riders offence, joining what could be his former Argos position coach if Costanza takes the green and white gig.

10. Rasheed Bailey
Bailey had an almost identical 2022 to his 2021 and I doubt he’s headed anywhere outside Manitoba fast. He deserves to be a top-10 receiver in this class of free agents even if Greg Ellingson and Dalton Schoen leaped over him for top dog status in the Collaros-led Bombers’ attack. 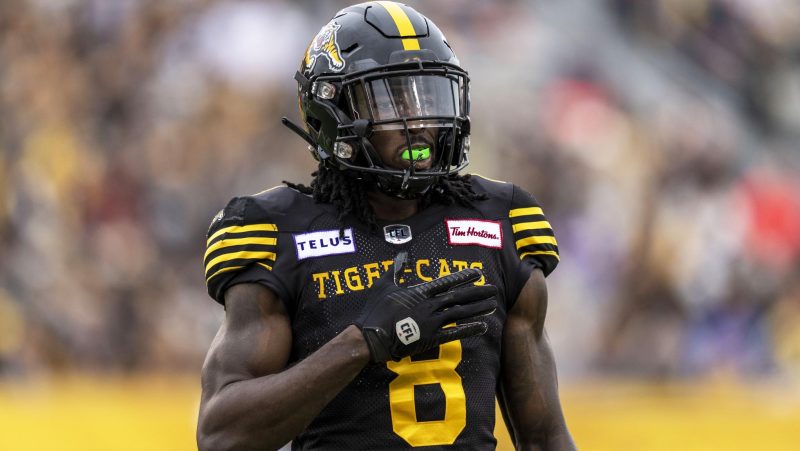 Will Steven Dunbar stay in Hamilton or find a new home this February? (Kevin Sousa/CFL.ca)

9. Steven Dunbar Jr.
He of the masterful one handed catch, Dunbar is a long ball threat who could benefit from a more efficient offensive attack, but has shown the ability to take quick throws the distance when the smallest of windows presents itself.

8. Reggie Begelton
His average depth of target dropped from previous seasons, perhaps to fit the style change from Bo Levi Mitchell to Jake Maier as delivery man, but Begelton still puts fear in defenders charged to cover him as well as any big frame in the CFL.

7. DaVaris Daniels
Often overlooked in Toronto while we talked about other receivers, the running game, or the Argos secondary creating numerous turnovers, Daniels found his rhythm with McLeod Bethel-Thompson down the stretch in 2022 and finished the Grey Cup with seven catches on a team-leading twelve attempts.

6. Greg Ellingson
Last year Winnipeg lost Kenny Lawler and replaced him with Greg Ellingson. You just knew the match with Collaros was destined to be great and it was before he fought to get back on the field through Winnipeg’s playoff push. He’s not going anywhere, but he’s easily a top-10 CFL free agent receiver.

5. Tim White
Second only to Geno Lewis in usage rate, the Ticats leaned on White more than could have been expected entering this season and he smiled while hauling in a CFL-high 94 regular season catches.

4. Nic Demski
Demski is as dynamic and flexible a player that exists in the CFL, let alone this class of pending free agents. Demski will be back in Buck Pierce’s offence before Christmas unless something unpredictable happens.

3. Kenny Lawler
Lawler could be anywhere from third to sixth for me on this list. At his best, he’s a cold blooded assassin of a pass-catcher capable of giving you big chunk plays in a moments notice. The question now becomes can Lawler recreate his 2021 success from Winnipeg and stay on the field long enough to have a Geno Lewis-like season in 2023?

2. Kurleigh Gittens Jr.
You can claim Canadian bias, you can suggest whatever excuses you want, but Kurleigh will just keep making catches, getting up and screaming in your face to remind you he can do anything you doubt him capable of.

Despite a rough Grey Cup with a couple of drops and no catches, I have no doubt it was just part of this elite receiver’s journey to stardom and a lesson he’ll carry into the next Grey Cup appearance he helps his team make.

1. Eugene Lewis
The man was a monster this year. Lewis set himself apart from the league for much of 2022 and will be a discussion in every single coaches office around the CFL this off-season until he signs on the dotted line somewhere for 2023.

With one decision he could change the power balance at receiver in the East division, or the CFL as a whole.