Jones says he could plug Manziel into Ticats offence easily

Jones says he could plug Manziel into Ticats offence easily

HAMILTON — June Jones chatted with the media via conference call on Monday, just hours after agreeing to a three-year contract to remain as the head coach of the Hamilton Tiger-Cats. After a season with plenty of changes and no shortage of swirling rumours, it would be unlikely that his call would end without being pressed about the possibility of Johnny Manziel signing with the club.

“I know that Kent has had some very good conversations with the agent,” Jones said Monday. “I think it’s more in their hands than our hands at this time. We still have to make a decision on that, whether he’s going to join the Hamilton Ticats or not.”

Manziel is currently on the Tiger-Cats negotiation list and last September he did indeed work out with the Ticats.  He also attended a meeting with CFL Commissioner Randy Ambrosie where it was determined that a contract for the former Texas A&M product would not be filed by the league in 2017.

“I don’t know whether it will be or it won’t, but we’ve had quite a few discussions myself, Kent, Scott and Sean Burke, about just that. We’ll see what happens.”

Jones has been entrusted with re-tooling the Tiger-Cats offence and made significant strides with the ‘Cats last year putting up a league-high 295 points post-Labour Day. 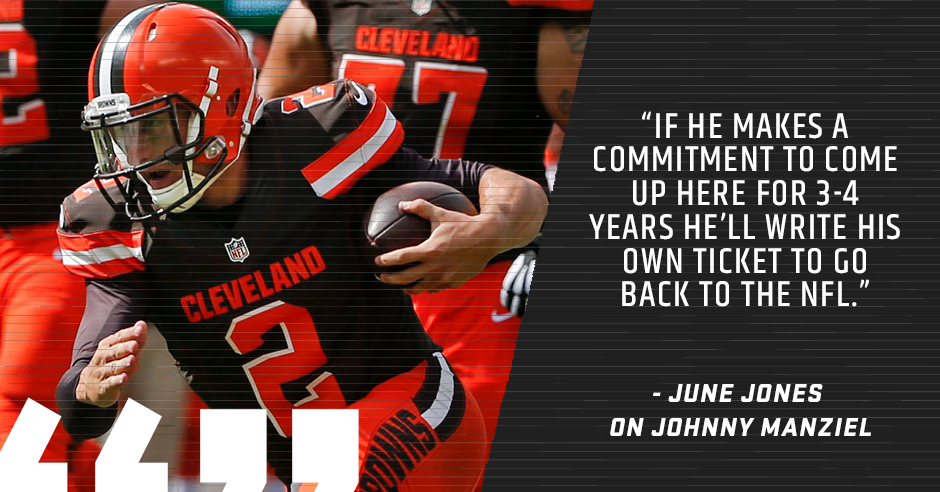 MORE ON MANZIEL
|| STATEMENT: League will not file contract for Manziel in 2017
|| READ: Manziel tells ESPN’s Schefter he had positive meeting with CFL, Ambrosie

If Jones were to have Manziel at his disposal he believes the former Cleveland Brown could fit well into his offence.

“I could plug him in very, very easily. I think he’s I worked him out twice and his arm strength is much better than I thought it was,” Jones continued. “I really think if he makes a commitment to come up here for three or four years that he’ll write his own ticket if he wants to go play in the NFL again. It’ll be a Warren Moon situation, to be quite honest. I think he has the potential to be a great football player.

June Jones says #ticats have had quite a few discussions with Johnny Manziel. “If he makes a commitment to come up here for 3-4 years he’ll write his own ticket to go back to the NFL.” Says he could plug Manziel into offence easily. #CFL