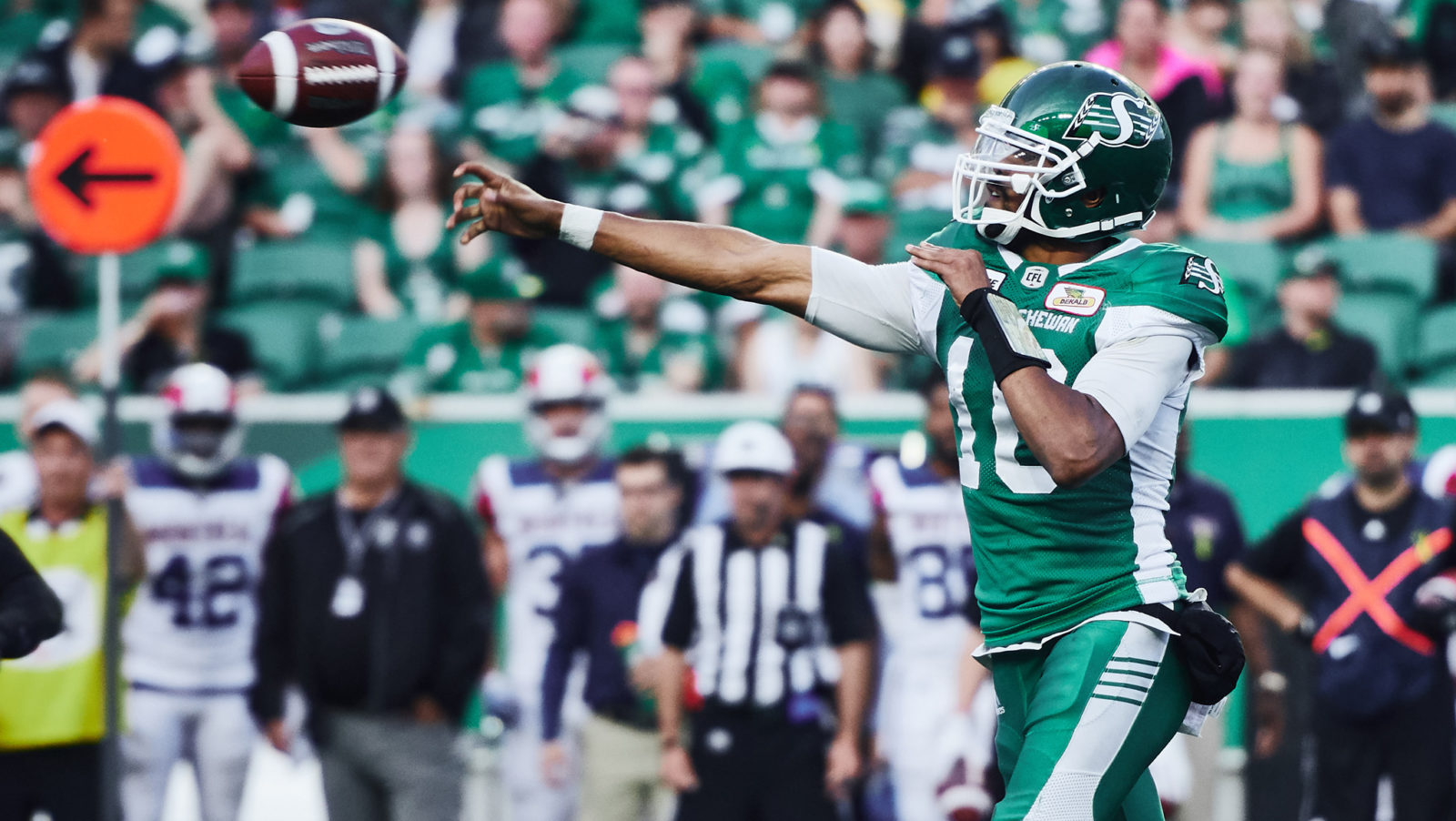 TORONTO — With their first five games against East Division opponents, including three at home, many had the Riders pegged for a fast start in 2018.

Things have changed in three weeks, with Chris Jones’ team dropping back-to-back games in losses to Ottawa and Montreal.

Many are tracing the team’s struggles to an injured Zach Collaros, or the team’s decision to play Duron Carter on defence following an injury to starting corner Nick Marshall. More likely, however, the Riders’ struggles can be traced to their carelessness with the football.

While being outscored 63-34 over their last two games, the Riders have turned the ball over a league-worst eight times. Their nine turnovers on the season put them in the CFL basement, while their minus-four ratio is also good for ninth overall.

There’s still plenty of time to respond for a team that bordered on elite throughout much of the 2017 season. But for now, the Riders are falling fast.

It hasn’t always been pretty for Dave Dickenson’s team, but a younger, more athletic Stamps team has raced off to a 3-0 start, including victories over the last two teams that beat them in the Grey Cup. More than a third of Calgary’s points have come off a league-leading nine takeaways, as the Stamps continue to make big plays on both sides of the ball. Of course, it helps that they remain unbeatable at McMahon Stadium.

Kind of like flipping a switch, Mike Reilly‘s two touchdown drives near the end of the first half erased a 12-point deficit, eventually setting up a 41-22 win over the BC Lions. What’s scary about the Eskimos is they’ve once again overcome some significant injuries on the back end of their defence, while, even without Brandon Zylstra and Adarius Bowman, they have one of the scariest offences in the CFL with the dynamic duo of Duke Williams and Derel Walker.

The Ticats could easily be 3-0 this season, but they’ll take a 2-1 start to considering their opponents. In fact, many had this team pegged for an 0-3 opening when the schedule first came out and revealed three tough western opponents. Despite trailing early, June Jones’ team was calm and composed and the outcome was never in doubt throughout a 31-17 win over Winnipeg, as the early East Division leaders continue to display the mark of a true contender.

A week after dominating Saskatchewan in a season-opening win, the REDBLACKS passed on their opportunity to make a bold statement with their visit to McMahon. The offence fell flat in a 24-14 loss to Calgary, led by Trevor Harris and his 13-of-29 performance that included some key misses. Still, you have to consider the opponent, and Ottawa has played well in its last 10 games, which is why the REDBLACKS stay put at No. 4.

Rookie quarterback Chris Streveler came down to earth in Week 3, throwing for 146 yards in a 31-17 loss to the Ticats. The Bombers have played it safe with their young pivot, who’s maintained a solid 6-2 touchdown to interception ratio but has averaged a meager 6.7 yards per attempt. An upcoming home-and-home could define the Bombers’ season, as they need to continue treading water in the absence of Matt Nichols.

Jonathon Jennings just couldn’t hang with Mike Reilly, as the Eskimos erased an early lead and never looked back on the way to a 41-22 win over BC. The Lions have shown some improvement early in 2018 but if Friday’s game was a measuring stick, it showed that they aren’t quite there yet. An upcoming home-and-home with Winnipeg, which doesn’t have Matt Nichols right now, could set the tone for what’s to come.

There will be plenty of emotions when the Argos come off their bye to begin a home-and-home with the Edmonton Eskimos Saturday afternoon. The Boatmen will be playing with injured quarterback Ricky Ray in mind, while also looking to avoid an 0-3 start. Then there’s James Franklin, who’s finally getting his opportunity as a starter, and against his former team at that. Can Franklin provide the spark the Argos need?

With their first win in nearly a year, the Alouettes have moved up in both the power rankings and, more importantly, the East Division standings. Saturday’s win over the Riders brings some optimism, but it should be cautious, as it’s not often a team wins in the CFL with just 10 first downs. The Als could also be without starting quarterback Drew Willy for a little while after he was injured in the third quarter and didn’t return.

Three weeks after opening the season with a win and vaulting to the top-three, the Riders fall to the bottom of the Nissan Titan Power Rankings following a home loss to the Montreal Alouettes. On paper this team is far too talented to lag at the bottom of the league, but quarterback play and ball security have eluded them on the way to a disappointing 1-2 start.