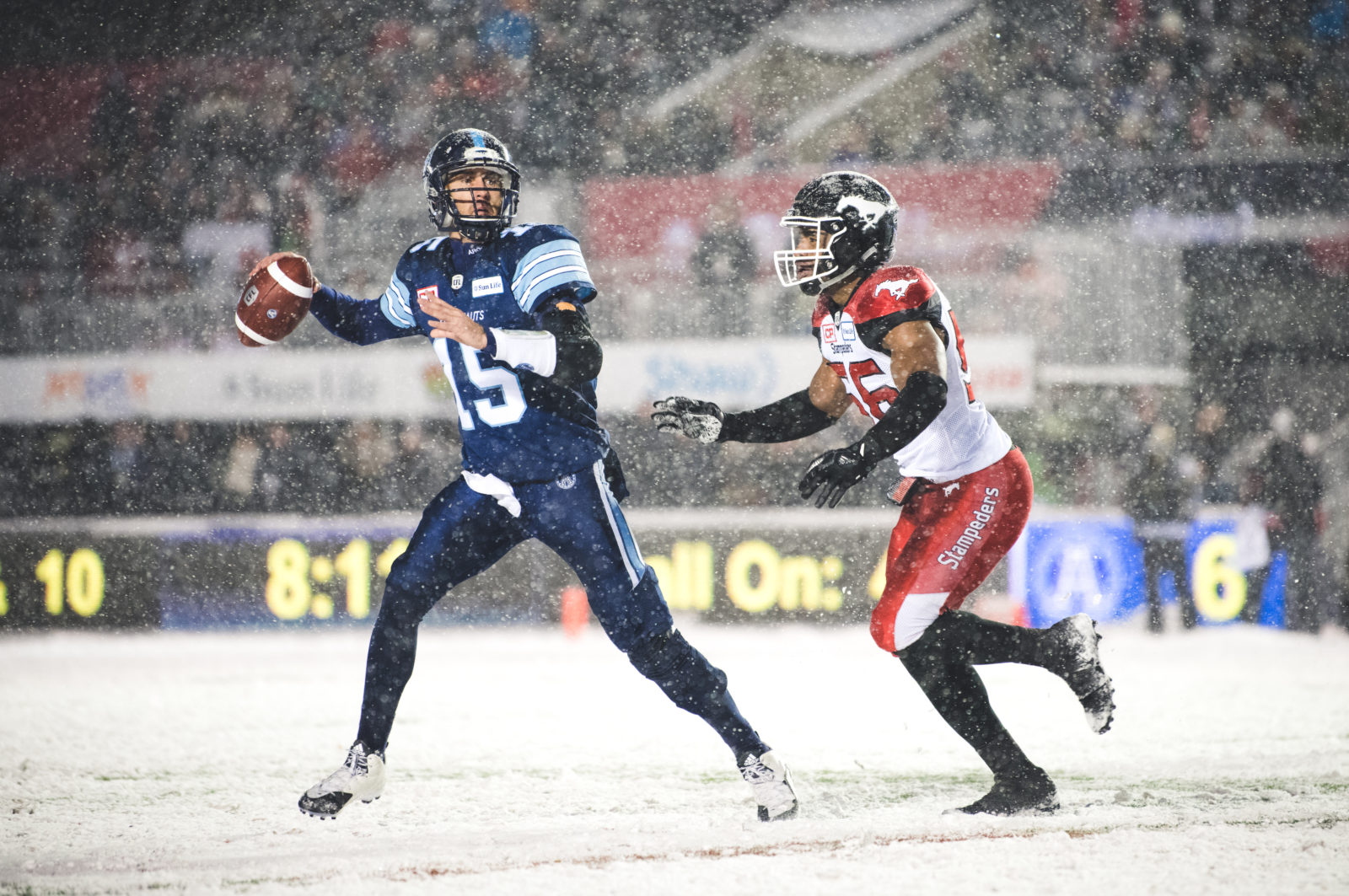 Sitting in the press box at BC Place, I’d just watched the Edmonton Eskimos put forth their best effort at answering some questions that surrounded them.

It was halftime of their game against the BC Lions on Aug. 6, 2015. Mike Reilly had gone down in Week 1 and would miss about half of the season, which opened the door for his backup, Matt Nichols. The expectations were high for the Esks that year. They’d won 12 games in 2014 and the only puzzle they couldn’t solve in the playoffs was their rivals to the south, the Calgary Stampeders.

They had a physical, mean and athletic defence and their coach, Chris Jones, had pulled all the right levers with it from the second he arrived in Edmonton. They had Adarius Bowman, Kenny Stafford and a guy on the practice roster at the start of the season named Derel Walker. They had all of the pieces to be a Grey Cup contender. Then Reilly got hurt and people wondered if Edmonton could overcome it.

Five games later, the Esks had been answering those questions. With Nichols at QB and that defence getting a taste of how good it could be, they were 4-1 and the hottest team in the league. A 17-point second quarter had the Esks up 23-10 at the half and they looked like they were well on their way to win No. 5.

The Lions’ defence got a second-half shutout and Travis Lulay was able to get the team what it needed offensively to get them back into the game.

There’s no way, I told myself as I looked at my mostly-written game story, that the Lions would complete this comeback. I watched them move the ball up the field with one eye on the clock the entire time. Inside two minutes, down 23-18. It’s probably a scare, but Edmonton gets out with a win by the skin of their teeth.

Then Lulay found Andrew Harris for a 31-yard touchdown with 1:11 left. Then Shawn Gore scored on the two-point convert. The lead was gone, the game was almost over and I was scrambling to rewrite my story. Ronnie Yell‘s interception of Nichols put the game on ice and like the Esks, my night’s work had come undone.

A couple hours later, when the interviews were done, the final version of the story was written and a cold beer sat in front of me, I  laughed about it. Now, going on five years later on a cold and wet day in Toronto on my balcony, peering out into a somewhat broken world, I miss it.

When I started thinking about my favourite games to cover, that BC buzzer beater was the first to come to mind. I’ve put together a short list of similar games; not necessarily the big playoff showdowns, but the ones that were just so much fun, or the ones that give you a telling look at what a team is made of, for better or worse, that have always stuck with me.

Since I went into detail on the 2016 Grey Cup — which is one of my all-time favourite games — in my last blog, I bumped that one out. It deserves a shout out here though. 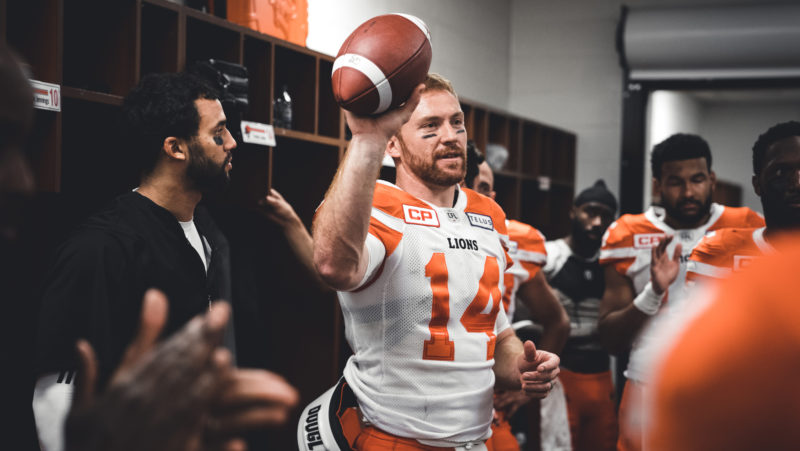 Unsure of what was next for him after battling injuries, Travis Lulay seized the moment when it came for him in 2017 (Johany Jutras/CFL.ca)

It was supposed to be the Jon Jennings show. The plan went out the window, though, when the Lions’ starter was injured on the first play of the game. Travis Lulay was thrown into action for his first meaningful in-game situation in over a year.

That would be a challenge in itself. There’d be the in-game rust that you might have to shake off and the possible mental side of getting back on the field after a multiple injuries. So how did Lulay do? He threw for a career-best 436 yards, setting CFL record for off-the-bench production. It was the first win a QB had scored off of the bench since Brett Smith did it in 2015 for the Riders. The Lions trounced the Ticats at Tim Hortons Field, 41-26.

In sports and in life, things so rarely end the way that we think or hope they will. Injuries have derailed so many athletes’ careers, leaving them thinking about what might have been or what they’d give for even one more chance to go out and compete. Lulay got his chance that night in Hamilton and he made the most of it. I’ll always remember the bounce in his step after that game, the high he seemed like he had. He said in the post-game that as he walked off the field after his shoulder injury in Ottawa in 2014 that he thought it might have been his last game. He seemed fully aware and appreciative of the moment.

This game marked the end date of a long and painful 13-game losing streak for the Esks against the Stamps; a journey that was full of frustration, season-ending games and for two friends in Alberta’s biggest cities, a massive beer debt.

The other side of this coin started on June 15, 2012, when the Stamps beat the Esks in a pre-season game. Edmonton wouldn’t taste victory against the Stamps until three years and three months later, with a win at home in the Labour Day rematch game.

From a football standpoint, there were a lot of things that stood out about that game to me. As  good as the Esks were that year, I felt like they needed to beat Calgary to prove to themselves they could do it. Chris Jones, a coach that doesn’t ponder the emotional/psychological aspects of the game with media very often, even admitted that much after his team had prevailed. The Esks went on to win the Grey Cup that year, of course and I think that win over Calgary was a significant stage in their journey to get there.

Then there’s the beer debt. I don’t remember what prompted the fan to email me, but I got a note in the week leading into that game that he and his brother-in-law, one an Esks fan, the other a Stamps fan, had bet a six-pack of beer on that pre-season game in 2013. Edmonton lost, so the next game was double or nothing. Edmonton lost again. Another double or nothing bet followed. Six beers had jumped to 12, then 24, then 48. On and on it went until that Labour Day rematch, when over 24,000 beers were on the line.

The Esks fan told me that his only concern was that his brother-in-law would call in the debt. “We would have had to remortgage the house,” he told me. You can read the story here. 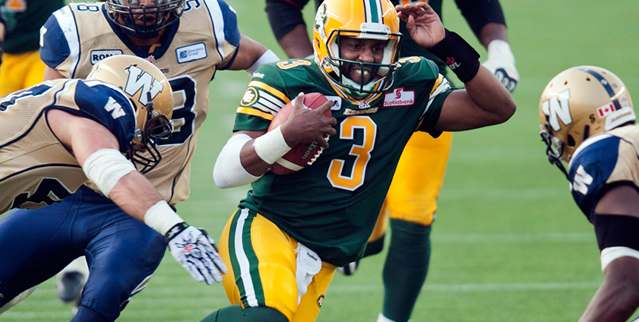 This was one of those revealing games that will always stick with me. Everyone looks back on that 2012 Esks’ season as a failure, the loss of Ricky Ray haunting the team all year before it culminated with Ray’s Argos thrashing the Esks in the Eastern Semi.

A few months before that, there was a game in Winnipeg that felt like a turning point in the team’s path.

People might forget that the 2012 Esks had started 3-1. They went into Winnipeg with a shot at first place in the West on the line and a bye week waiting for them after. They came a few yards away from that win, when something unfortunate happened. Down 23-22 with about 40 seconds left in the game, Steven Jyles rushed and got the team into field goal range. He continued to run, had the ball punched out of his grasp, with Winnipeg recovering to seal the game.

Jyles sat in the visitors’ locker room at CanadInns Stadium, maybe the only player on the roster that hadn’t started changing out of his uniform. He looked absolutely crushed. He knew what was at stake, knew what he could have done and knew what the fumble meant for his team. To his credit, he answered every question asked of him.

As I was writing my story in the press box, I eventually saw Jyles emerge from the locker room and make his way down the sidelines to a group that was sitting in the stands. Jyles had committed to a post-game event with the Bombers’ team chaplain. He spoke with the crowd briefly, then made his way out into the night. I think about both parts of that story. How that Esks team didn’t have what it needed to win games — they were 5-3 before losing eight of their last 10 games — and that Jyles always came across as a good person that ended up in a very difficult situation. 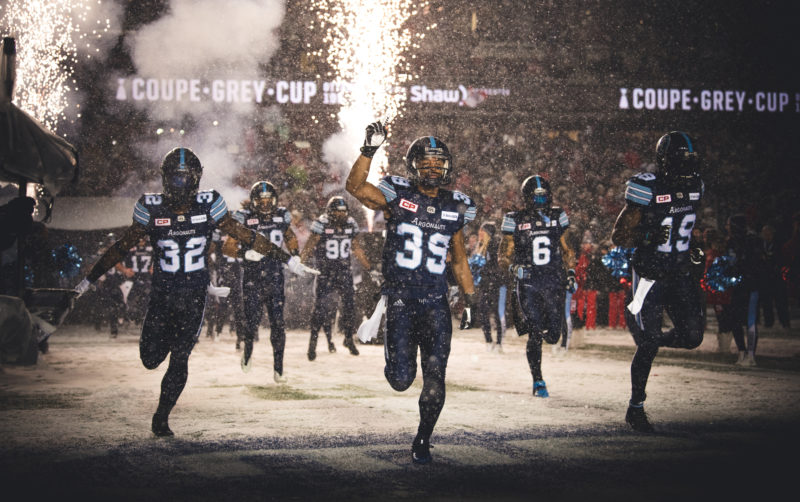 In 2017, the Argos and Stamps played a classic Grey Cup game in a snow storm (Johany Jutras/CFL.ca)

It had been cold in Ottawa all week leading up to Grey Cup Sunday, but the city remained stuck in a post-fall/pre-winter stage. It almost made you believe the weather was holding off until the game would be over.

In a matter of an hour or two, the favourable conditions for the game turned on us and by kickoff, we had plows clearing the snow that was being dumped on us. Even some CFL staffers (shoutout to Eric Noivo) were on the field with shovels, doing their part.

There’s something special about absurd weather during a Grey Cup, though. The sun had set and under the lights of TD Place, the snowflakes looked like shreds of over-sized confetti, flip-flopping down on us in slow motion.

You could see both the Toronto Argonauts and the Calgary Stampeders struggle with the conditions early in the game, but both sides seemed to settle into it relatively quickly. Bo Levi Mitchell was able to hit Kamar Jorden for a 31-yard TD pass and Ricky Ray had no problem connecting with DeVier Posey for their Grey Cup record 100-yard touchdown. The game-defining play — Jermaine Gabriel forcing a fumble on Jorden that Cassius Vaughn recovered and took 109 yards for the touchdown — was more a play made than it was a weather issue. The Argos scored an incredible upset win over the Stamps and they did it in a snowglobe that felt like it came out of nowhere, which made it feel that much more special.

Self-isolation hack of the week: Saying hi to others

One quick and hopefully helpful non-football note. Amy Dempsey has a story in the Toronto Star that I’ve seen making the rounds over the last few days about how people in cities are actually greeting one another when they’re out for a walk. Worried it was just something she could have been hoping into existence, she asked the question on Twitter and got a resounding affirmative from the masses.

We’re isolated, but it makes a big difference to smile, wave and say hello to the people we see when we’re out (while still maintaining two metres of distance). It’s especially nice in the bigger cities where this doesn’t often happen, to get that interaction that’s been scaled back on us in the last few weeks. It’s a good reminder that we’re going through this together.