O’Leary: All eyes shift to quarterbacks in All-Decade voting

O’Leary: All eyes shift to quarterbacks in All-Decade voting

We’ve reached the highest profile portion of voting for the All-Decade Team presented by LeoVegas: It’s time to vote for the quarterback. For the most casual of fans, this is the one vote that should come easily. For the in-depth die hards, it’ll be the most important decision of this multi-week process.

How you go about making that choice is up to you. If it’s based on production, you’ll see Mike Reilly: 31,522 yards over 155 games. If it’s efficiency, it’s Trevor Harris’ 103.1 passing efficiency rating, over 133 games (72 starts) at the top of a list of very distinguished quarterbacks. Right behind him in that category, though, are two of the winningest QBs the league saw over the last 10 seasons, in Bo Levi Mitchell and Ricky Ray. 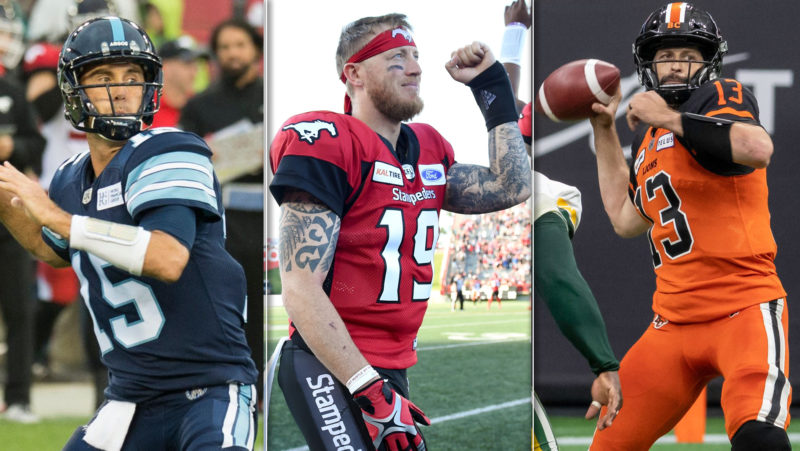 Ricky Ray, Bo Levi Mitchell and Mike Reilly may lead the discussion on who the decade’s best QB is, but there are a lot of HOF-bound players to also consider (Photo: CFL.ca)

To most, this is a three horse race (invoking horses here doesn’t imply an allegiance to the Stampeders, for the record). It’s Ray, Reilly and Mitchell. They dominated the decade and were consistently in the conversation as to who the best of the best was over the last 10 years. Ray served as the veteran presence in the conversation, having put up an almost equally impressive prior decade, while Mitchell and Reilly have battled for the last six years for the right to take the torch from Ray and lead the league into the future.

To just focus on those three does a great disservice to the other QBs on the list that are worthy of your consideration over the next two weeks that voting is open. Henry Burris is behind only Reilly on passing yards, with 30,766 and no doubt the fact that he was able to lead a three-year-old Ottawa REDBLACKS franchise to a Grey Cup win in 2016 will carry weight with voters.

It goes without saying that with any fan polling, you’ll have to contend with the influence that Rider Nation yields. Darian Durant played in 115 games between 2010 and 2018, throwing for 26,256 yards. Most important to Riders fans, he led the team to a Grey Cup win at Mosaic Stadium in 2013, helping to take a bit of the sting out of the Riders’ 2009 Grey Cup loss.

Then there’s the best-traveled QB in the CFL, Kevin Glenn. He doesn’t have the hardware that some of his peers do, but Glenn wrapped up a hall-of-fame worthy career after spending the 2018 season in Edmonton, collecting his ninth and final CFL uniform backing up Reilly. Glenn was a starter, a backup and an insurance policy that more than once put in MOP-worthy numbers for teams as he made his way across the country. His 29,448 passing yards for the decade are right behind Reilly and Burris and his touchdown total (166) is fourth on our list, behind Burris, Mitchell and Reilly. His 117 starts are the most a QB had in the decade.

We anticipate this being our most hotly debated selection. Longevity, productivity, consistency, playoff wins and losses, they’ll all factor into the decisions that people make and just like in football, there can only be one winner. We can’t wait to see who gets selected at this position and how fans make their decisions.

It’s time to rumble (via voting). May the best quarterback win.