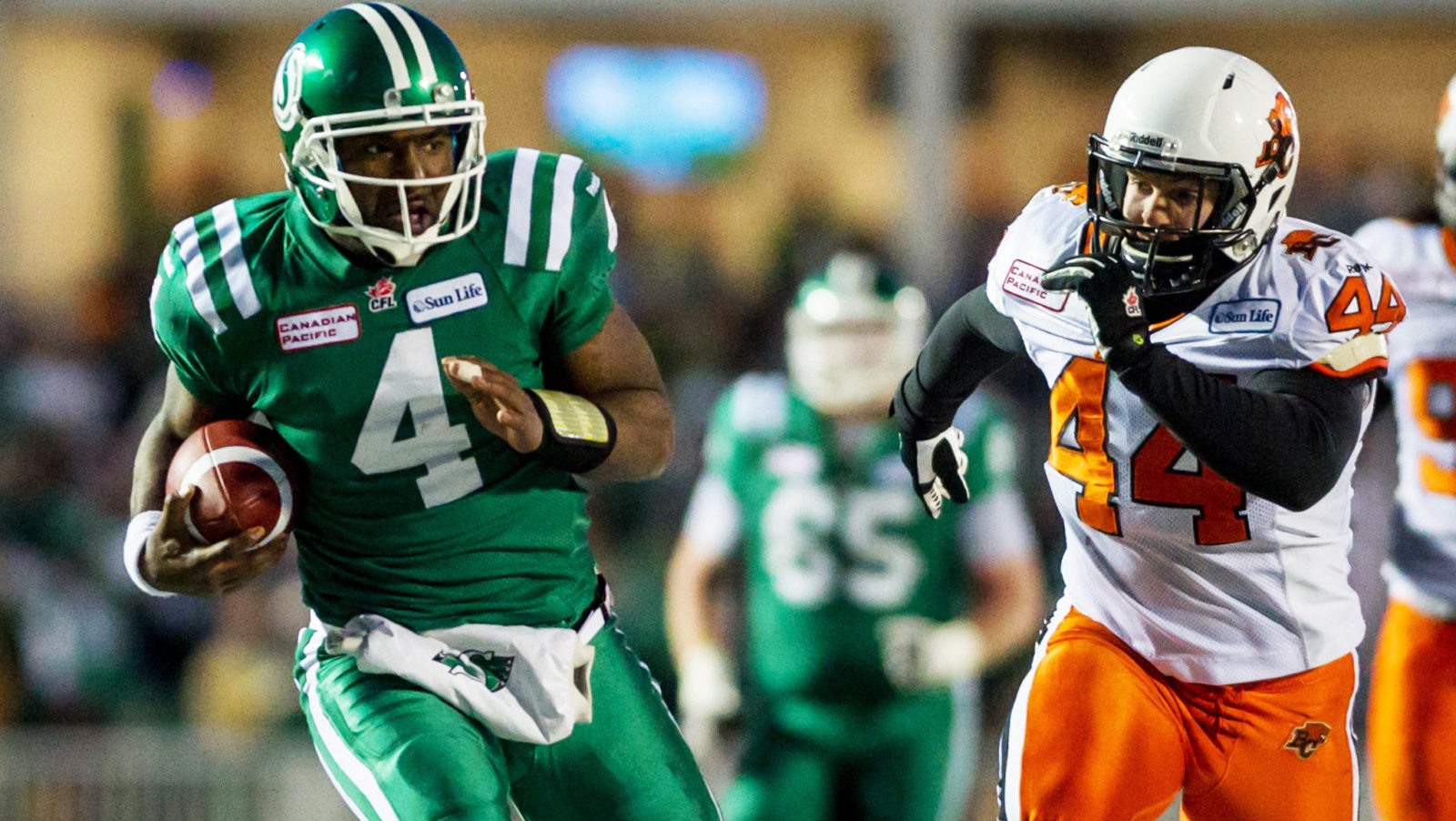 Division Semi-Final weekend, where the road to the Grey Cup begins.

And for 11 teams in the West Division, it started a run all the way to the Grey Cup.

Does that seem low?

In 107 years, yes, only 11 times did the winner of Grey Cup come out of winning a Western Semi-Final.

Of course the latest was just a year ago, in an even rarer feat when the Bombers went on the road to win the Semi-Final and the Final on their road to winning the Grey Cup.

So let’s settle in and remember some of the biggest and best games from the Western Semi-Final that launched a team toward a Grey Cup victory.

RELATED
» Former Stampeder enjoying football south of the border
» A look back at the closing of Mosaic Stadium/Taylor Field four years later
» Morris: Lions will have many options for GM hire

The story begins in 1984, when the Winnipeg Blue Bombers became the first team to out West to win a Grey Cup having to begin their run in the Semi-Finals.

The game itself does not make the top five list, however, after a 55-20 beat down of Edmonton before they rolled through the rest of the playoffs with a 17 point win in the final and then an impressive 30-point win over Hamilton in the Grey Cup.

So here are the top five Western Semi-Final games and moments that launched a team to a Grey Cup victory.

The 2000 Western Semi-Final saw the BC Lions nearly blow it against Edmonton. This game started the run that saw the Lions become the first team below .500 win the Grey Cup.

The 8-10 Lions were led by Hall of Famer Damon Allen and after winning three of their final four games, saw them go in hot the Western Semi-Final against the heavily-favoured Edmonton Football Team. 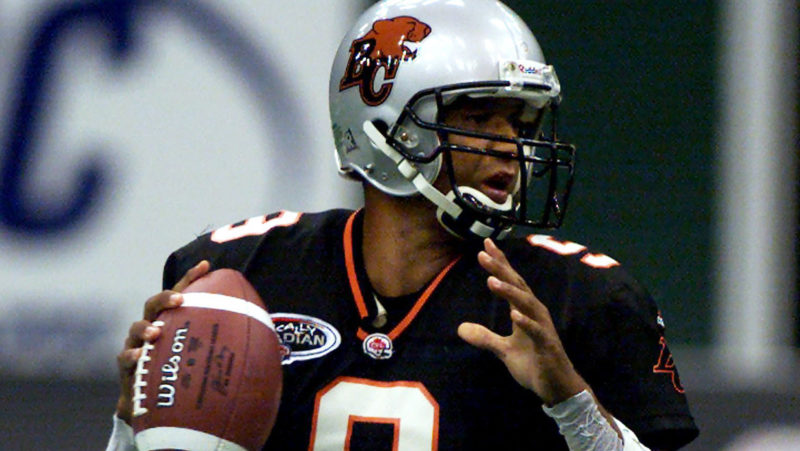 And the Lions shocked the CFL by taking a 31-14 lead into the fourth quarter. Edmonton started to storm back, although it’s a game that is remembered more for two key Sean Fleming missed field goals for Edmonton than it is for an incredible performance like we’ll break down in the other games in this piece.

After missing a 41-year field goal earlier in the fourth quarter, Fleming lined up from 42 yards with under a minute to go to tie. No good.

The Lions were off to beat up on the Stampeders the next week and then would have similar drama at the end of their Grey Cup victory when Montreal had a chance to tie as well with a two-point convert that failed.

Roughrider fans may want to put this up higher on the list because of the performance of one man in the fourth quarter; Darian Durant.

The Riders were hosting the Grey Cup and Durant became a man possessed in the fourth quarter as Saskatchewan found themselves down 25-16 going into the final 15 minutes.

Durant ended the third quarter with a 15-yard run as a sign of things to come. It became the Durant show. A 35-yard run set up a 10-yard touchdown pass to Weston Dressler. After the Riders took the lead with a field goal, they put insurance on the board with Durant taking off for runs of 28 and 13 yards, setting up another Chris Milo field goal to take a 29-25 lead with 50 seconds left in the game.

If that wasn’t a sign of things to come, I don’t know what else anyone needed.

Durant put the team on his back and carried them to victory. The playoffs would be flawless for Durant, scoring eight touchdowns with no turnovers. It’s a Western Semi-Final performance that Rider Nation won’t soon forget.

Call this the Jason Maas game.

Maas was the ultimate team guy for Edmonton. Rookie Ricky Ray came in and took his starting job a few years previous and Maas continued to be the ultimate teammate. Maas was remarkable in 2004 but when Ray came back from the NFL, Maas had to check his ego again and had to watch Ray lead the team. 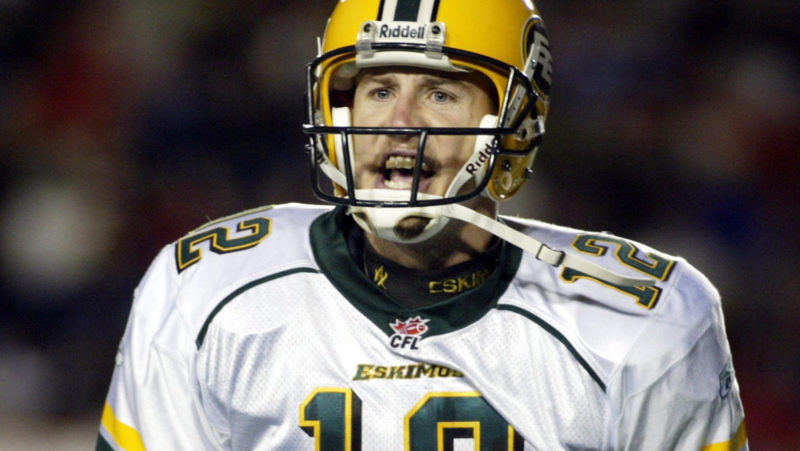 It wasn’t without controversy, however, as they entered Calgary for the Western Semi-Final. The offence had been struggling to score to close out the regular season and then Danny Maciocia had a decision to make at the half. Calgary led 23-12 at the half and Ray wasn’t playing well.

Maciocia gave Maas a shot and he didn’t disappoint, especially in the fourth quarter after pulling Edmonton to within a touchdown, Maas led the team on a 16-play drive that ended with the game-tying touchdown.

The next time Edmonton got the ball, after Joffrey Reynolds fumbled, Maas took four plays to hit Jason Tucker for the eventual game-winning touchdown with four minutes to go.

There were tense moments for Edmonton down the stretch until Kelly Wiltshire picked off Henry Burris to ice the game. But it was a lasting memory for Maas, who a week later threw another game winning touchdown pass, coming into a tie game in the Western Final. If not for Maas in the Semi-Final, Ricky Ray doesn’t win Grey Cup MVP two weeks later.

The Riders marched into Calgary for the Western Semi-Final with banged up roster. A starting lineup of receivers that featured Ray Elgaard, Jeff Fairholm and Don Narcisse had quarterback Jeff Bentrim, backups James Ellingson and Rob Bresciani starting at receiver. The team had plucked Brian Walling off Edmonton’s practice roster to help fill out their roster in Calgary.

The team might as well had been put together with duct tape and gum.

However, it was one of the biggest plays in Riders history that allowed them to continue their magical run to winning the best Grey Cup ever.

Brian Walling sent them to Edmonton with a classic 50-yard scamper on a draw play with just over a minute left after two clutch catches from quarterback turned receiver Jeff Bentrim.

The 33-26 final tells the story of a great game between two prairie rivals.

The entire story of the 1994 BC Lions playoffs is a remarkable journey of last minute miracles which gave the classic Canadiana moment as Lui Passaglia’s kick sailed through the uprights against the Baltimore Stallions as a fan in the upper deck flew a Canadian flag on Grey Cup Sunday.

But fast forward to the Semi-Final and the Lions needed their first of what ended up being three-straight, last-second game-winning plays.

The Lions were up against Edmonton and seemed down and out with four minutes to go and down by three, Edmonton had a chance to ice it. After Eddie Brown scored the go ahead score from Damon Allen, Edmonton had the ball again and Allen hit Lucius Floyd for a huge play with about six minutes left in the fourth quarter.

Allen would march by the Lions bench staring them down with a gesture feeling the game was about to be put out of reach and then Charles Gordon put his name in Lions lore with an interception at the goal line with under four minutes to go.

Like he did in 1989 with the Roughriders, Kent Austin was the quarterback tasked to march the team down the field for the win. He did just that, chewing up yards and time.

Lui then stepped on the field for his first of two game winning field goals in the playoffs, nailing it with 32 seconds to go in the game.

Edmonton couldn’t move the ball to give BC the win.