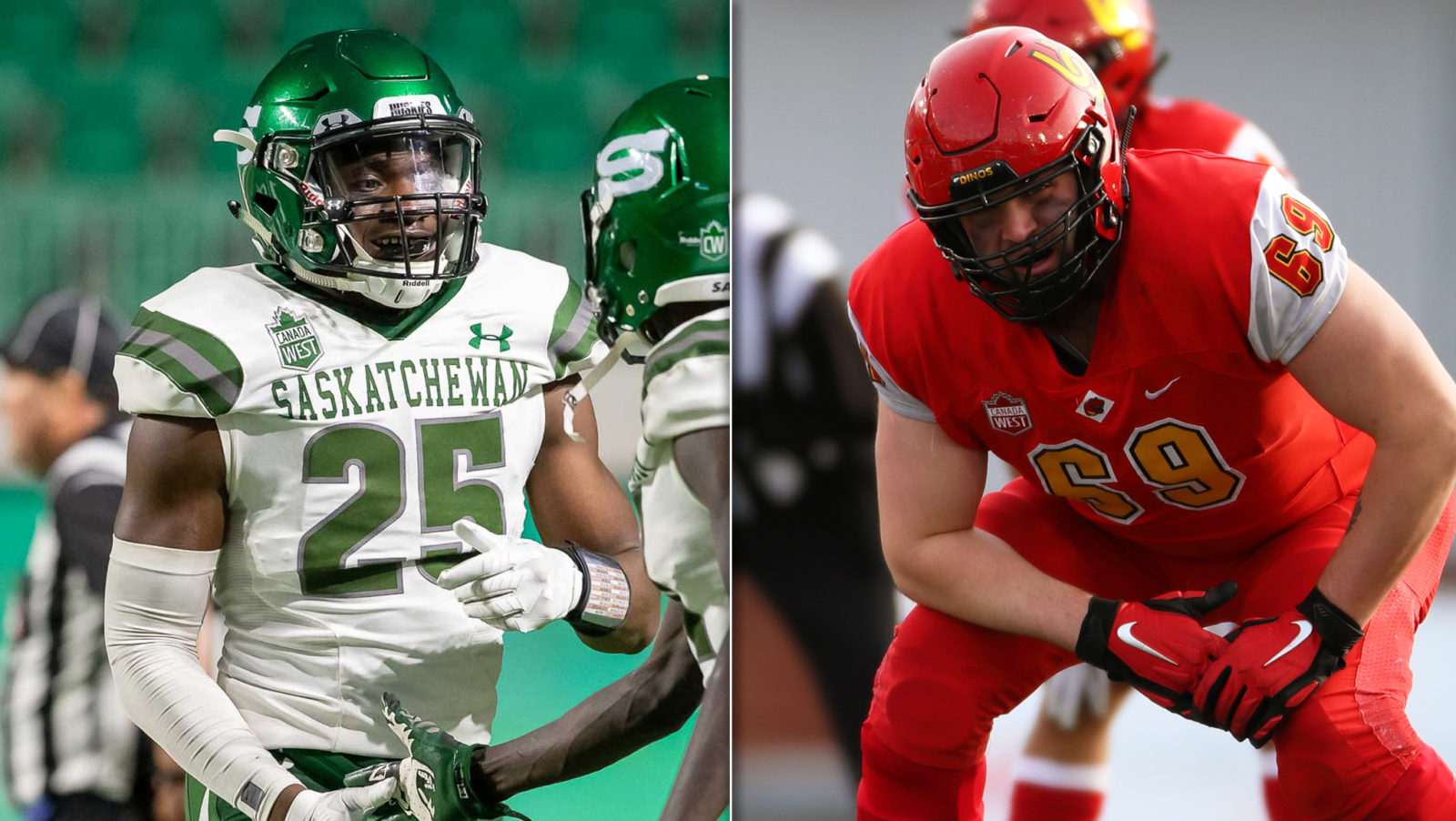 Photo: Get My Photo/University of Calgary Athletics

TORONTO — The 2021 CFL Draft is around the corner and players are beginning to ramp up preparation to have their names called by one of the league’s nine franchises.

In 2020, 73 individuals were selected, and another 54 will be welcomed into the league this time around.

On Wednesday, the Winter Scouting Bureau Rankings were officially released. Two of the top U SPORTS prospects available this year — University of Saskatchewan defensive back Nelson Lokombo and University of Calgary offensive lineman Logan Bandy — spoke to the media ahead of starting their respective draft journies.

In most years, the Scouting Bureau Rankings would feature a predominant amount of U SPORTS stars. However, 2021 is a different story as of now. Out of the top 20 prospects in the most recent rankings, only four are plying their craft at Canadian Universities.

It’s a massive year for NCAA prospects, and while the names on the list come from big-name schools down south, they also had the benefit of being able to play a full season.

With the COVID-19 pandemic still prevalent in North America, schools have gone to online learning and in some cases, sports have been postponed or outright cancelled.

The 2020 NCAA football season was in flux earlier in the year, but conferences and schools began to figure out plans to get games in during the pandemic.

In the case of U SPORTS, they were forced to cancel their fall and winter national championships, and the conferences announced cancellations in short order.

The AUS, OUA, RSEQ, and Canada West football were all put on hold for 2020, leaving draft prospects without tape or on-field reps ahead of potentially making the jump to the pro ranks.

Both Lokombo and Bandy were affected by this, having to sit out a crucial year of football in their respective careers.

Despite that, Lokombo remains one of the top DBs available in the 2021 class after a standout 2019 campaign with the Huskies.

He finished the year with 19 tackles, three sacks, four interceptions and four pass breakups. That earned him Canada West Most Outstanding Defensive Player honours and a conference All-Star selection.

This year, he stayed home in BC, training with older brother — and Toronto Argonauts safety — Bo.

“I’ve always been inspired by my brother, so having a guy that’s in the CFL and that is a CFL vet is huge,” Nelson said. “We’ve been doing mostly on-field work, increasing speed. Doing some sand work, some hills and talking about the game too.

“We’ll sit down together and watch some games. He’ll show me some of the games and the concepts and how to prepare and manage. So he’s been really big to have.”

Nelson was also asked about having the chance to play with his brother as a pro, something he’s excited about the prospect of.

“I think that’d be pretty cool to play with my brother,” he said. “I’ve watched him growing up and I’ve always dreamt of playing with him. So that would definitely be one cool moment.”

As for Bandy, he’s spent the past four years playing for the storied Dinos program, making it into 23 career games on the offensive line.

He has held down the blindside for Calgary, helping them to a Vanier Cup victory over Montreal in 2019. He was also named a Canada West All-Star as a result of his efforts.

Bandy has declared for the draft after not being able to play his fourth year of U SPORTS football.

“I think it was the best decision for me,” Bandy said. “I think that I’m ready, I’m prepared, and it’s the best opportunity for me to go and achieve my dream of playing pro football. So that’s the way I looked at it.”

EPISODE OVERVIEW: Fresh off the release of the winter edition of the Scouting Bureau, Donnovan chats with Canadian NCAA lineman Liam Dobson, CFL prospect and sought after transfer from the University of Maine who has found a new home at Texas State for his final season of college play.

Both Bandy and Lokombo were invited to the annual East-West Shrine Game in St. Petersburg, Florida. However, they won’t be able to participate.

“I’ve talked to a few former Dinos guys that have gone like Joel Van Pelt — who went I think it was two years ago — and they told me about their experience and how it went and what the game means,” Bandy said. “So when I got the selection, it was pretty cool but there is some furstration that we don’t get to go down there.

“…But we have to take it as an opportunity. You still get to hear from some of the top players and coaches in the world. So it’s really turned into us trying to pick their brains for information or advice.”

With the off-season now in full swing, the next step for both prospects will be the CFL Combine, which will be virtual this year.

There’s a large contingent of players looking to be selected this year, so every player will have to be in top form to cement their positions in the rankings.