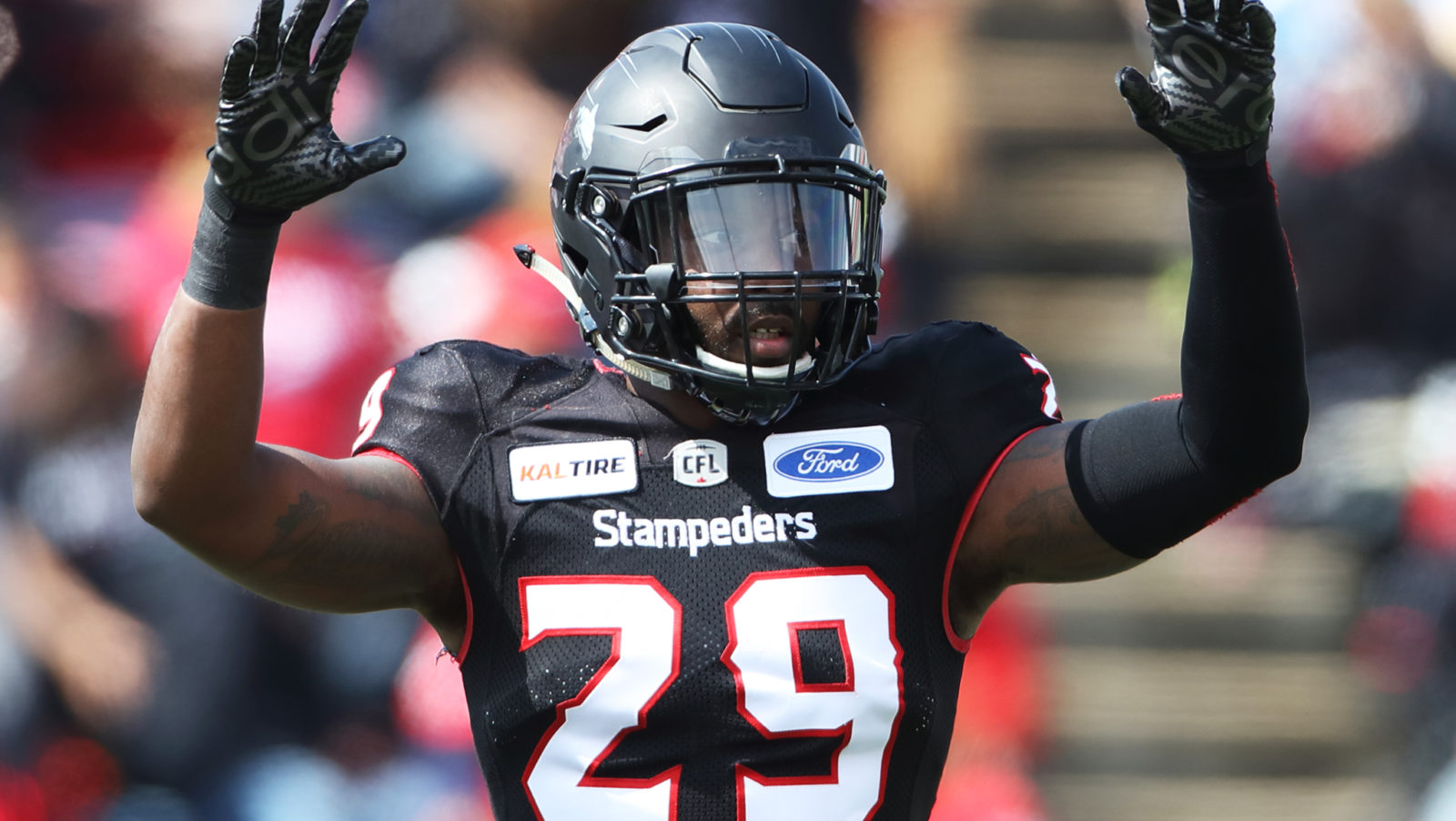 Jamar Wall is one of the vets on the Stampeders defence that will be relied upon on and off the field (Stampeders.com)

Much has been made of the new look nature of the Calgary Stampeders this season. That applies heavily on the defensive side of the ball, with new faces stepping in all over the map thanks to numerous significant departures.

Since the last time we saw the Stamps, defensive stars Tre Roberson, Wynton McManis, and Nate Holley have all caught on in the NFL. Additionally, Cordarro Law has been traded to Toronto and Brandon Smith has retired after 11 seasons in red and white. That’s a lot of star power to replace.

RELATED
» Trusting the Process: Stamps tap into their systems for 2021
» Mitchell on Stamps receivers: ‘I’m confident in the guys we have’
» Rene Paredes set to be a stabilizing presence in 2021

Even with all those losses, defensive coordinator Brent Monson has a trio of veteran holdovers he’ll lean on heavily as this transition takes place. In each of the three defensive position groups, Calgary has a key veteran to lead the way and ensure things run smoothly early on.

Among current players, only kicker Rene Paredes has worn red and white longer than Wall. Entering his ninth season with the team, Wall is no stranger to being a key member of a Calgary defence. Slotting in at the hybrid SAM linebacker spot once again, Wall’s role in 2021 will be more important than ever.

Wall has held an important leadership spot on this defence for some time. This year, however, he’ll be looked to as THE leader in so many ways. Veteran defensive back Brandon Smith has retired after more than a decade with the Stampeders, leaving Wall as the longest-tenured member of this defence.

But, even with nearly a decade of CFL football under his belt, Wall is still at the top of his game. The 33-year-old had a stellar 2019 at SAM, racking up 67 tackles and a sack while also handling significant coverage responsibilities. With so many new faces in the secondary, Calgary is going to need all of what Wall offers, on and off the field.

While Greenwood hasn’t been with the Stamps as long as others, he has been playing pro football longer than any of his teammates. Greenwood turned pro for 2010 with Kansas City and has been on an NFL or CFL roster ever since. That track record and experience will be invaluable come training camp and the start of the regular season.

Much like Wall, we’re talking about a veteran playing at an extremely high level. Greenwood’s 2019 was stellar, as he set career highs with 79 tackles, an interception, and three forced fumbles in just 12 games. Over a full season, Greenwood likely would have been in the conversation as one of the league’s top defensive players.

Cory Greenwood is the projected starter at middle linebacker for the Stamps this season (Stampeders.com)

Penciled in as Calgary’s starting middle linebacker for 2021, Greenwood brings a ton to the table. He’s a tone setter when it comes to work ethic and conditioning, which carries weight coming from a guy in a key position. On the field, Greenwood has solid range, hits like a freight train, and is hard to escape from upon initial contact. Finally, at 36, Greenwood is the type to likely benefit from a year away from the grind of a football season. I’m expecting a really strong campaign.

Very much under the radar, Wiggan enters his sixth professional season in 2021, all with the Stampeders. For a generally young defensive line lacking a ton of CFL experience, Wiggan is the perfect guy to take a leading role. His path to a full-time starting defensive tackle is one every coach loves to see, as it’s been all about hard work, biding time, and finally earning a spot.

A 2014 fourth round pick, Wiggan started with Calgary in a bit role in 2015 and started grinding his way up the depth chart. He started one game as a rookie, two as a sophomore, before making the jump to 11 in 2017 and a weekly starter the following season. Since 2018, Wiggan has played 32 regular season games, starting each and every one. That’s the type of guy I’d want to use as an example when trying to drive home “the right way” to do things.

Wiggan will be 29 when the Stamps kick off this season, which puts him right in the prime of his career. Knowing what we saw from him in 2019, everything points to another huge year. Very quietly, Wiggan was one of the league’s most disruptive interior lineman last season, finishing with 35 tackles and four sacks. Calgary will be counting on him to truly anchor their front four in 2021.

Jameer Thurman, linebacker – After a couple years south of the border in the NFL and XFL, Thurman’s return to the Stampeders is massive. Thurman played a pair of seasons with Calgary in 2017 and 2018, racking up 82 tackles, two sacks, an interception, and a forced fumble in year two. Just 26 years old, you can pen Thurman in as Calgary’s starting WILL and you shouldn’t be surprised in the slightest if he has a monster return season.

Mike Rose, defensive line – Coming off a breakthrough 2019, Rose will likely line up beside Wiggan to form an intimidating interior duo. After biding his time for a couple years, Rose busted through last season with 46 tackles and five sacks. The Stamps have traditionally relied on dominating in the trenches and Rose will be a big part of making that happen again in 2021.

DaShaun Amos, defensive back – For Calgary, it’ll be like Amos never left. Prior to the cancellation of the 2020 season, Amos had already signed on with the Green Bay Packers and also spent time with the Aviators in the Spring League in October. Now back with the Stamps, Amos will look to build on a 2019 where he started 17 games, racking up 42 tackles and five interceptions.