The fit has been so perfect, the move so seamless and the results so astonishing.

Given all that, it was nearly impossible to imagine Zach Collaros in any Canadian Football League uniform other than the Blue and Gold of the Winnipeg Blue Bombers.

Yes, his resumé will remind all of the stops in his career, as he broke into the league with Toronto in 2012, made a name for himself across the country during his 2014-2017 days with Hamilton, and then was traded twice in 2019 — from Saskatchewan to Toronto, and then from the Argonauts to the Blue Bombers in one of the most dramatic and impactful deadline-deals ever completed in this league’s history.

And so, when Collaros officially put his name on a one-year contract extension with the Blue Bombers Thursday night it was a decision made for a number of reasons, including the numbers on his new contract, which will reportedly make him the highest-paid player in the CFL.

Still, this is a relationship that goes so much deeper than that.

“I love the group of people that are there – the support group, the coaches from the top down and obviously the guys in the locker room,” said Collaros in a Zoom call with media Friday from his hometown of Steubenville, OH.

“We’ve signed quite a few of our free agents and have some to get back and some to join the team, but this game is about winning football games and the journey that goes on during the season. You take a look around and a lot of us have been other places and I don’t think anybody wanted to leave this group and not chase after wins every week together.”

The Blue Bombers chapter in his CFL career is already legendary. Acquired from the Argos literally seconds before the close of the trade deadline in October of ’19, Collaros went 4-0 in his starts that fall – including through the playoffs in helping the franchise end a 28-year championship drought.

He followed that up by going 13-2 in starts in ’21 – including another Grey Cup victory – while being named a CFL All-Star and the league’s Most Outstanding Player, the first Blue Bomber so honoured since Milt Stegall in 2002 and the first Winnipeg QB to be named the league’s all-star pivot since Khari Jones in 2001.

And, oh yeah, in his last game of ’21 he helped lead the Bombers to a dramatic come-from-behind overtime victory in the Grey Cup, earning MVP honours, while becoming the first QB to lead the club to consecutive championships since Ken Ploen in 1961-1962.

All of this coming, again, after all the stars aligned just right at the last-second on that fateful trade-deadline day in ’19.

“It’s just funny how life works. I can’t really put one word on it to describe it,” Collaros said. “Obviously, we’re very blessed and fortunate to have been given the opportunity in 2019 to come to Winnipeg and to play for that great football team. Again, the season ended the way we wanted it to end and last year was an amazing experience for me personally, my wife and I have had two children in between that time. It’s just been a really magical two-and-a-half, three years for us – minus the thing, everybody else is going through in the world. It’s just been amazing.

“Again, I can’t say how fortunate enough I am. I tell my teammates all the time, to be in the locker room like we have and guys holding each other accountable, understand the standard, understand the culture… it makes you want to come to work every day and continue to get better and not just for yourself but everybody else.”

Collaros said the uncertainly surrounding the current collective-bargaining agreement with the CFL means a lot of players – and teams – are pushing for one-year deals until they get more clarity on where those discussions may lead. In any case, he celebrated his new contract in Steubenville with a buddy over ‘a few beers and a cigar.’

Now, to truly appreciate what has happened in Collaros’ life since his arrival in ’19 it’s necessary to zoom out from that moment and take a gander at the bigger picture. After being injured and traded twice that season, he and his wife have had two daughters come into their world, he’s helped the Bombers win back-to-back Grey Cups and is now both the CFL’s MOP and all-star QB.

That’s a complete 180 from where he was at prior to his arrival in Winnipeg and he touched on where his head space is now compared to just before he was traded here. 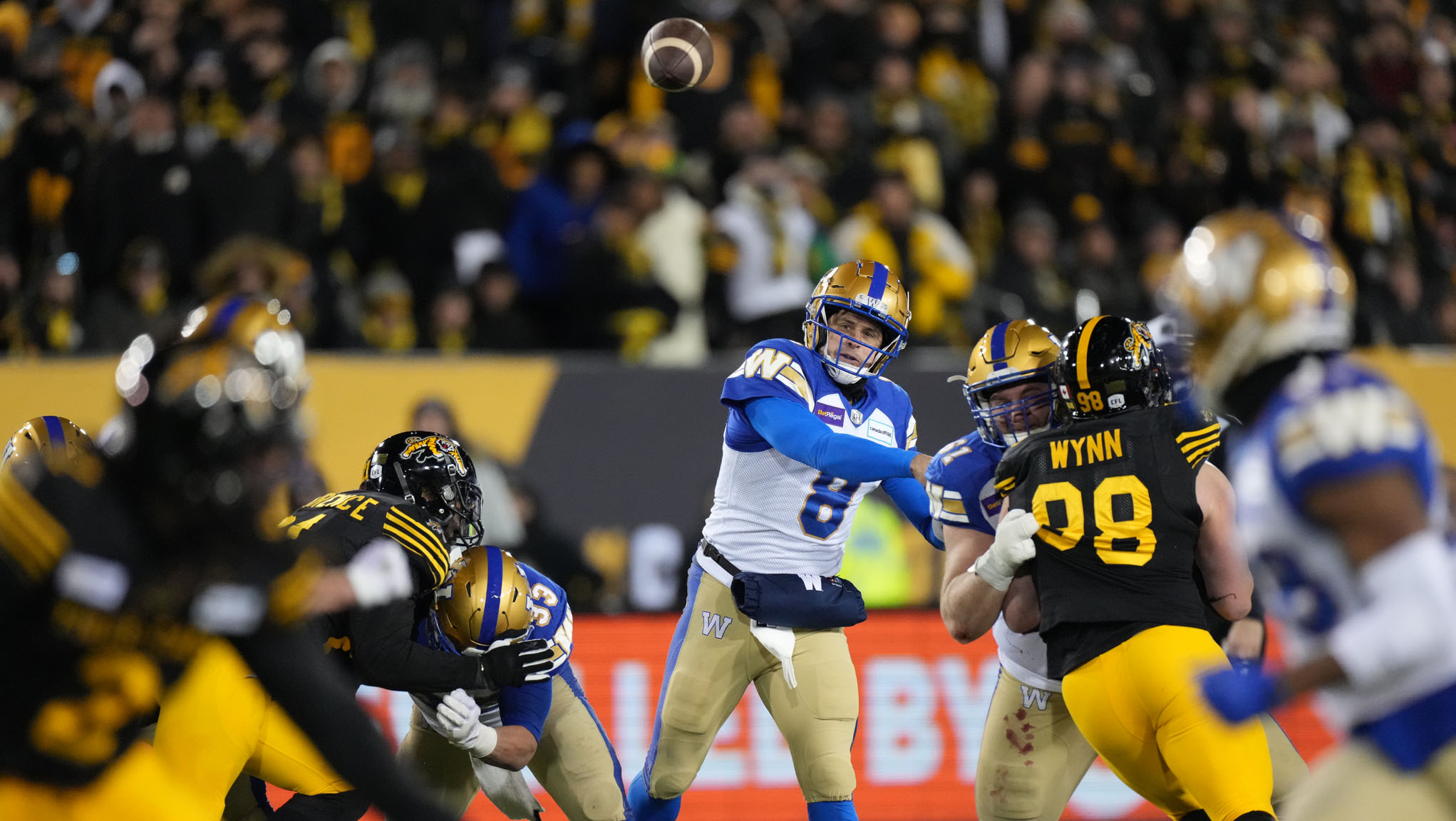 In 2021, Collaros steered the Bombers through a dominant regular-season, then the difficult road to defending their Grey Cup championship (Geoff Robins/CFL.ca)

“Going through that (2019) season, I was kind of thinking about, ‘What am I going to do next? Probably at the end of my road here, just unfortunate things that have happened and missed opportunities and so on and so forth,’” he said. “Obviously, I think we’re more at peace, knowing where we’re going to be, knowing the people in the organization, my wife getting closer with the other families and people on the team as well. I think it’s great.

“We’re just more at peace and more at ease with just our entire situation, as opposed to moving around every single year. It felt like after the stint in Hamilton that’s what our life had become there, and it wasn’t something that we were enjoying.

“I don’t think it’s a knock on any other organizations or teams that I’ve played on. It’s just a compliment, again, to what has been built here in Winnipeg and just my teammates. This game is about winning football games and going to work every morning, going through the process of putting together the game plan and practising. As well as off the field, getting to know each other’s families and all those kind of things. I just couldn’t, I wouldn’t want to go anywhere else and, for one, start that entire process over again.

“I just can’t imagine there being better people to be around to chase after these goals that we have.”

The Blue Bombers have knocked 12 names off their pending free-agent list since the New Year, while losing DeAundre Alford (Atlanta) and Jonathan Kongbo (Denver) to the NFL. There’s a core that wants to remain, even under the salary-cap restraints, because of the good thing they’ve built – and the desire to chase a three-peat in ’22.

“A lot of us talked about during the season and even after the Grey Cup,” Collaros said. “Pretty much all of our contracts were expiring, but a lot of us knew the grass isn’t always greener if you always chase the money kind of thing, right?

“I’m excited to be back and I know a lot of guys — Biggie (Adam Bighill) signed as well and all the people that we’ve re-signed so far and hope to re-sign moving forward — love the culture, understand the standard, and can’t wait to get back to work.”