At the start of her football journey, Tanya Walter was in her hometown of Forestburg, Alta., a village about 90 minutes east of Red Deer.

A basketball fan whose allegiances were pulled over to football during a NBA labour dispute, Walter found the game that fulfilled her where other sports came up short.

“‘You’re too aggressive. You take this too seriously,’” Walter recalled on Tuesday, as she sat next to BC Lions head coach Rick Campbell, the both of them in Lions’ garb.

“It wasn’t until later on when I got into football that I realized there was a space for an athlete of my mindset that worked as well as it did.”

Sitting next to Campbell, her new boss, Walter had immersed herself further into her calling and surrounded herself with more of her people. She was named the Lions’ defensive assistant coach on Tuesday, making her the first full-time female coaching hire in CFL history. 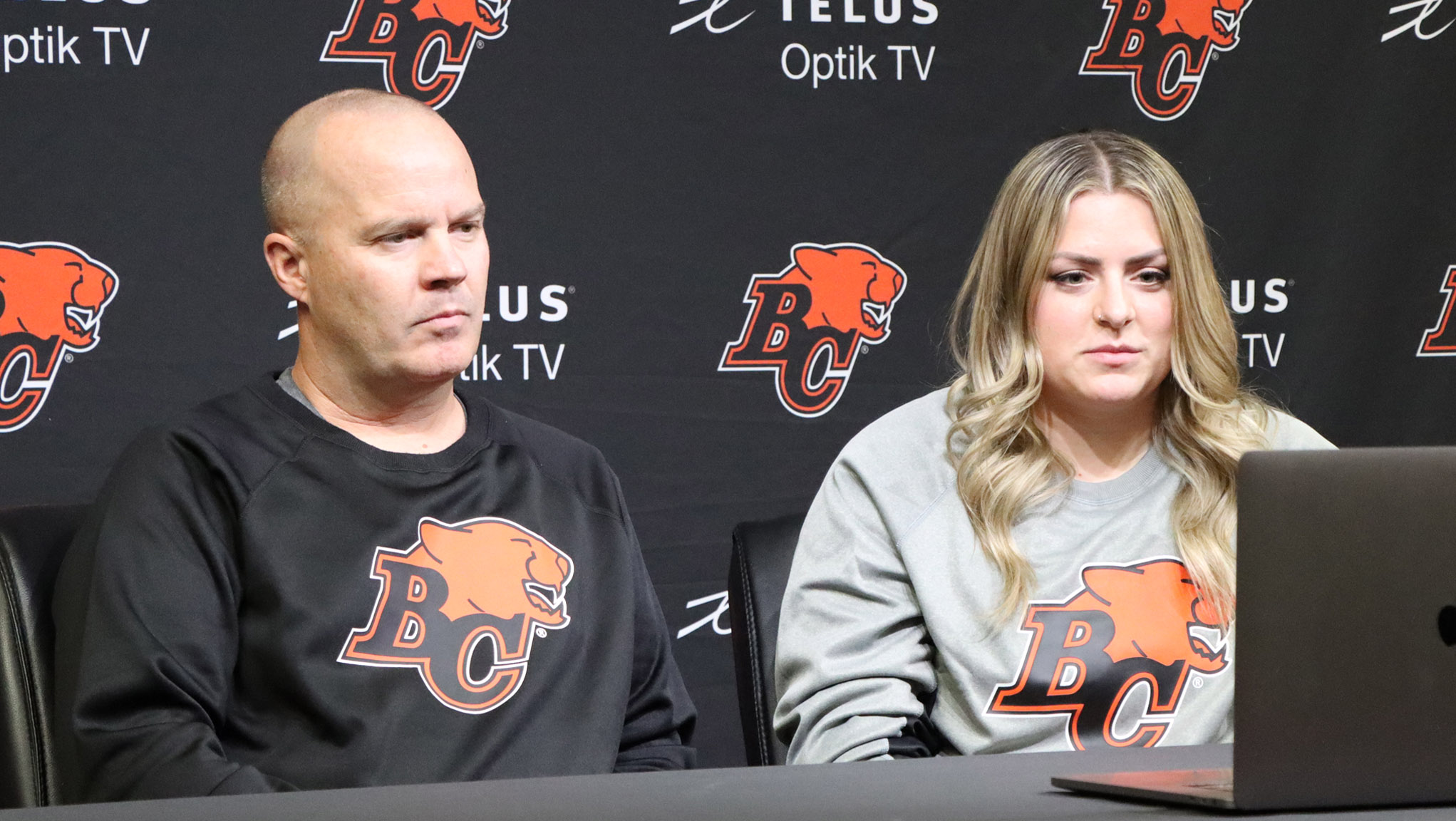 Walter is a former player – she was a linebacker for Team Canada – and started coaching at Edmonton’s St. Francis Xavier High School, with a four-year stay from 2017-2021. She worked as a guest coach with the CJFL’s Edmonton Huskies and worked as an assistant for the West Edmonton Raiders girls tackle football team.

On Tuesday, she made the leap to the CFL ranks and made some history along the way.

“Every year we have job openings come up…and this was a defensive assistant position that I wanted to look at everybody,” Campbell said.

“We always get multiple resumes, talk to multiple people. I literally just wanted to find the best person that I thought would be the best fit. After several Zoom conversations…I just think she’s going to be a really good fit and be able to help us and I think it was a two way street.

Like other trail blazers in sport, whether it’s those that have broken racial barriers or gender-based ones, there’s a pressure that comes with it. Walter is ready for that, while focusing on taking the next steps in her career.

“Personally at first, it’s that I finally have the opportunity to progress my coaching career, which is a really big deal to me. (It’s) something that I’ve wanted to do: Move up, continue on,” she said.

There’s pressure that comes with breaking a glass ceiling, she said, but it’s something she’ll work with.

While she’s breaking through as a woman in the CFL’s coaching ranks, she’s not making this journey alone. Walter mentioned a number of female coaches in the U.S. that she’s met and has as supports. She listed off Phoebe Schecter, who worked on the Buffalo Bills’ staff and Katie Sowers, who has worked with the Atlanta Falcons, the San Francisco 49ers and the Kansas City Chiefs. 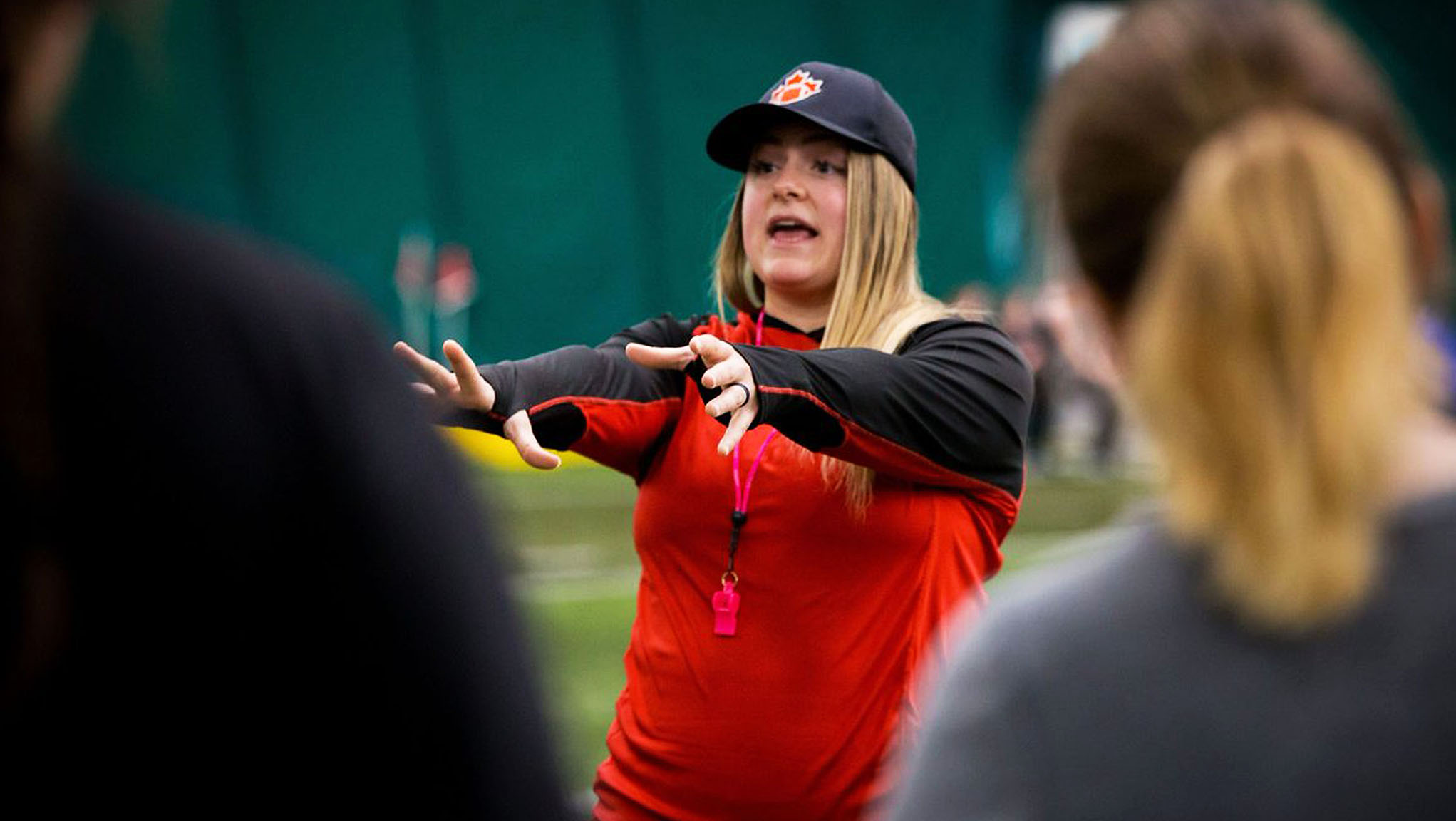 A former national team member and a coach around Edmonton for the last six years, Tanya Walter has earned an opportunity with coach Rick Campbell’s BC Lions coaching staff (BCLions.com)

Walter attended the NFL’s Women’s Careers in Football Forum in Orlando, Fla. in 2018. She was one of five Canadians to attend that year. The program has been a door opener to many women looking to ignite their football careers.

The NFL says that since 2017, participants in the NFL Women’s Forum have secured 201 positions in football, with 107 of them in the NFL. Another Canadian at the forum in 2018, Laurence Pontbriand, is now the CFL’s manager of football and officiating development.

“The women’s football community, obviously, even though it’s worldwide is quite small,” Walter said.

“They’re the first to go pro and it just sets that pathway and it sets the tone. It’s just that extra push that, you know, it’s possible.”

With a lack of female coaches around her on a day-to-day basis, she leaned on powerful women in sports like Serena Williams for inspiration. Locally, she sought out female groundbreakers, whether they sat on the boards of organizations, or women that worked around her in training.

“People that are kind of likeminded in the sense that they’re in an industry where they do often feel alone,” she said of her inspirations. “When it comes down to it, it’s just kind of amalgamating all of those successes and thoughts together and just going for it.”

Campbell said Walter’s job duties will include film breakdown and working with his defensive coaches, being on the field full-time, “just like you would see with any of our guys.”

“I think as this thing goes on, you’ll just end up seeing her as another coach, as we continue to go into the season. And I mean that as a compliment,” Campbell said.

“As we keep going and day-by-day we do our thing, I think she’ll just be part of the team. The thing I really like about football is you can’t hide. You’re either contributing to the team or you’re not. And so I fully anticipate her contributing in a big way.”

After splitting her time working as a personal trainer in Edmonton and with volunteering as a coach, Walter will now get to dive into her passion full-time. She has goals of one day being a head coach, but there isn’t a clock ticking on that for her. She’ll take everything she can from this coming season and continue to build.

“It’s no doubt that there’s going to be a lot of growth this year. To have the opportunity to do it full-time and not just as a volunteer for a couple hours an evening is a huge difference,” she said.