Rourke set to return in season finale against Winnipeg 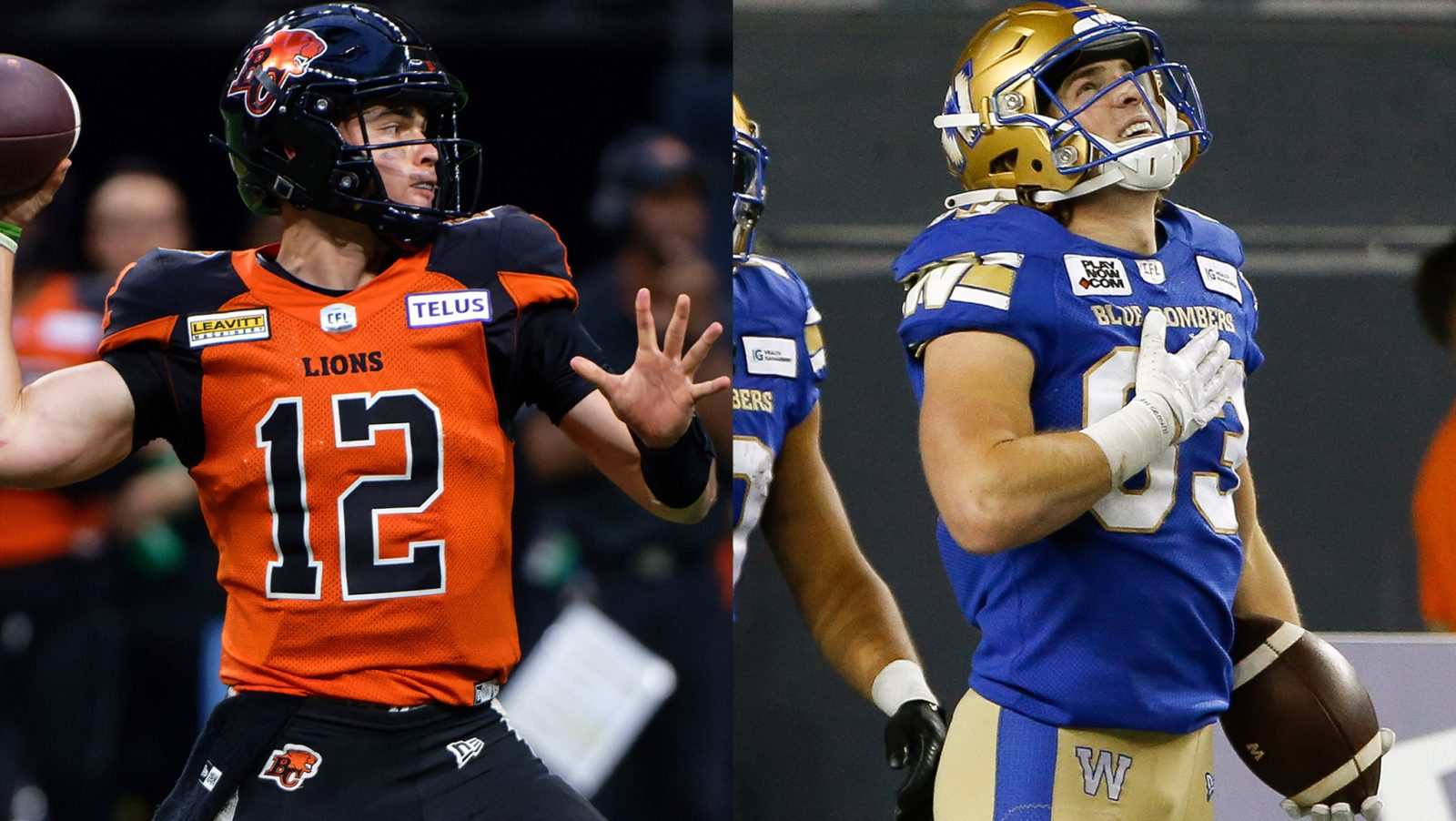 Rourke set to return in season finale against Winnipeg

WINNIPEG — As the Winnipeg Blue Bombers get set to host the BC Lions in the final week of the 2022 CFL regular season, there will be no shortage of storylines to follow.

In what was some of the biggest news to be announced this week, Lions head coach Rick Campbell confirmed that star quarterback Nathan Rourke will be expected to start under centre on Friday after missing the last nine weeks of the season with a foot injury.

With a 31-14 victory over the Edmonton Elks in Week 20, the Lions clinched their standing as the second placed team in the West Division and will host the Western Semi-Final on November 6 from BC Place.

The Blue Bombers playoff standing has also been secured, after an impressive showing in the regular season Winnipeg claimed the top spot in the West and will host the Western Final from IG Field on November 13.

The Lions and Bombers last squared off in Week 19, a game which saw the Lions earn a 40-32 victory over the division rivals. Vernon Adams Jr. completed nearly 60 per cent of his passes including a 23-yard touchdown pass to Dominique Rhymes to help the Leos secure a crucial win.

Come Friday, the BC offence will be led by Rourke for the first time since injuring his foot in a Week 11 triumph over the Saskatchewan Roughriders.

Playing in just nine games this season the second-year quarterback has completed an eye-popping 79.2 per cent of his 313 passing attempts, while throwing for 3,281 yards and 25 touchdowns. Rourke has also demonstrated that he is a threat to score as a ball-carrier, rushing for 304 yards and seven touchdowns, including a 50 yard touchdown run against the Ottawa REDBLACKS in Week 4.

While finding success through the air for the Lions will be a focal point in the teams game plan, it won’t be an easy accomplishment. BC will be facing a Bombers defensive secondary that has become one of the best in the league.

Entering the final week of 2022, the Winnipeg pass defence has surrendered an average of 254.5 yards per game, the lowest in the league and have allowed just 19 passing touchdowns this season, the second fewest in the league.

Rourke’s only action against the Blue Bombers this season came in the team’s 43-22 home loss to Winnipeg in Week 5. Despite the outcome, Rourke completed 64 per cent of his 25 passing attempts for 278 yards and three touchdowns, with Rhymes fielding a team-high 136 yards and two touchdowns in the game.

The Lions leading pass-catcher is sure to provide a sense of comfortability for Rourke as he returns to game action. Rhymes has had a remarkable season and is currently just 11-yards behind Winnipeg’s Dalton Schoen for the league-lead in receiving yards. Rhymes has totalled 1,346 yards and 11 touchdowns on 82 receptions this season, setting a new career-high in each category.

Approaching Friday’s contest in Winnipeg, Rourke spoke to team media stating that he is excited to be back on the field with his team.

“I’m excited to get back,” Rourke told BCLions.com. “It’s fun to be a part of the team, go to practice and all that stuff. I’m happy to have a chance to play. All through this process I wanted to be able to play in a playoff game.”

As of late, the Lions offensive attack has been fueled by running back James Butler, in his last two appearances he has recorded consecutive games with at least 100 rushing yards and a touchdown. In five of his last six games, Butler has rushed for at least 80 yards while averaging over five yards per carry.

In his team’s Week 20 win over the Elks, Butler smashed through the 1,000 rushing yard mark with 141 yards on the ground and now trails Ka’Deem Carey, the league’s rushing yards leader, by just 34 yards approaching the final week of the regular season.

In Winnipeg, quarterback Dru Brown was given the start in the team’s Week 19 loss to BC. Making his first career CFL start, Brown completed 28 of his 39 passing attempts, throwing for 325 yards and three touchdowns in the effort.

Brown leaned heavily upon the veteran hands of Rahseed Bailey was targeted a team-high 14 times in the game, catching 11 for 121 yards and two of Brown’s three touchdown passes. Schoen was the next most targeted receiver for the Bombers, catching four of his seven attempts for 82 yards and his league-leading 15th touchdown reception.

Despite the what appeared to be a successful day statistically, Brown did face adversity in the form of the Lions pass defence, a unit that has been one of the best through 20 weeks of regular season play. In the Week 19 win, the BC secondary forced two interceptions from the young Bombers pivot. Lions defensive backs T.J. Lee and Marcus Sayles each recorded interception returns for a touchdown, with Lee returning his 102 yards for the score.

Despite having their playoff standing already secured, Collaros detailed to team media that it is important to maintain the proper routine for game day preparation.

“It’s another week, that’s how we’re all treating it,” Collaros told BlueBombers.com. “We’re going to prepare the exact same way we always do, try to find an edge to get better every day. We’re excited for the challenge, BC is a great team. You have to play hard every week to win the football game, there’s no guarantees in many ways in this sport.”

Week 21 also brings some additional positive news for the Winnipeg offence, Greg Ellingson has been listed among the team’s starting receivers on the depth chart and will make his first appearance since suffering an injury that has kept him sidelined since Week 10.

Ellingson has appeared in just seven games for the Bombers this season, but has been impactful in every game he’s played. The veteran slotback has caught 37 of his 47 targets for 572 yards and three touchdowns this season. Ellingson averages 81.7 receiving yards per game, 15.5 yards per catch and has recorded at least 50 receiving yards in each of his seven appearances.

While it has been a milestone season for many within the Winnipeg passing attack, running back Brady Oliveira will be chasing a milestone of his own on Friday evening. The Blue Bombers running back has tallied 929 rushing yards and four touchdowns on 193 carries through 17 weeks of play, with 71 yards against BC, Oliveira would record the first 1,000-yard season of his career.

A win for the Bombers would give them a 15-3 record to finish the 2022 regular season, and would mark the first time in franchise history that Winnipeg has finished the regular season earning 15 wins.

Meanwhile, BC is looking to win the season series against the Bombers and carry some momentum into their Western Semi-Final matchup against Calgary.

Kickoff from IG Field is scheduled for 8:30 p.m. ET. The game can be seen on TSN, ESPN+ and can be followed on CFL.ca’s Game Tracker.