The Rookie and the Vet: Muamba guiding Jones to greatness 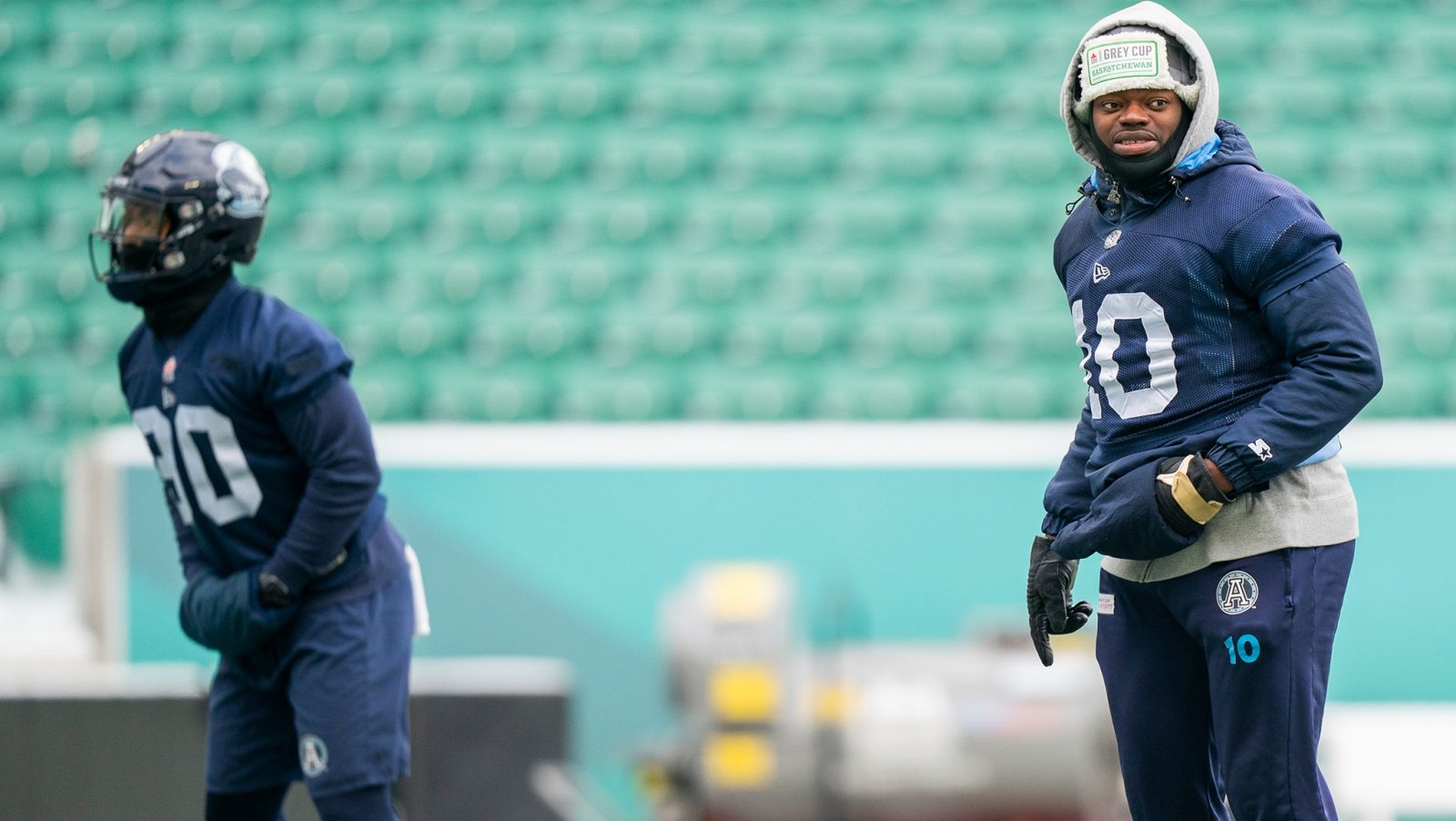 The Rookie and the Vet: Muamba guiding Jones to greatness

It’s a difficult thing to take the place of a player like Wynton McManis, the superb weak side linebacker for the Toronto Argonauts.

But Jonathan Jones, the rookie who will very likely play a boatload of snaps at the position on Grey Cup Sunday, has already done it once and done it very well.

109th Grey Cup
» Argonauts, Blue Bombers to compete for 109th Grey Cup
» Quote Board: Argos take the podium Wednesday
» How To Be a Champion: Banks searching for first Grey Cup
» Fire and Ice: Bethel-Thompson touches down at GC109

Jones, who turns 25 years old on Friday, was a revelation for the Argos’ defence, filling in for an injured McManis in tremendously positive fashion, recording 10 tackles, 2 interceptions and a sack in the four games he started in the team’s final four regular season games. Six of those tackles and one of the interceptions came in Toronto’s win over the Montreal Alouettes in Week 21.

“I just put my head down, listened to my teammates, listened to my coaches and just did my job,” said the native of Florida and one-time member of the Notre Dame Fighting Irish, reflecting on swimming rather than sinking when asked to take over McManis’ position in October.

It was a sudden shock to the system for a player who came into the CFL with high expectations and a little impatience, and who’d ended up spending most of the season on either the team’s practice roster or injured list. Now, though, Jones is poised to play a seriously important role when his team takes on the Winnipeg Blue Bombers in the 109th Grey Cup.

With McManis – who returned to the Toronto line-up for the Eastern Final but then was injured again during that game – a question mark for Toronto this weekend, it looks like Jones will be asked to once again show off the playmaking ability that has some observers thinking he is another McManis in development.

“He’s extremely athletic,” praised Argos defensive coordinator Corey Mace. “Extremely explosive. He does a lot of things that you like about Wynton. He’s exceeded expectations.”

Jones has been schooled well by the likes of Mace and linebackers coach Kevin Eiben, and he is aware that he has been the beneficiary of the gridiron wisdom he’s received from Muamba as well. One of the things Muamba helped instill in Jones was a measure of patience as a play unfolds. Previously, Jones says, he’d been a whirl of a linebacker, blasting off at full speed on every snap.

Patience off the field and not just on it is something Muamba has been trying to champion with Jones as well. After arriving in Toronto part way through training camp last May, Jones impressed straight away yet landed on the team’s practice roster anyway. And when he first hit the active roster it was as a special teams player only, in a Week 3 loss against the BC Lions. He was off the roster again after that and then back on specials in Week 8, but dislocated his shoulder during that game in Ottawa, landing on the injured list for a month. He was straining to have more and to have it now.

“He and I have had multiple heart to hearts,” said Muamba. “I told him. I think he’s going to be Adam Bighill. He’s going to be Solomon Elimimian. And that’s going to come. But you can’t rush the process. And I repeated that to him, I think, millions of times.”

“He’s a guy that’s very well capable of that,” Muamba continued. “But he’s in his first year and he wants it all, right? I don’t blame him and I want a young linebacker to think like that. To want more than he has at the very moment.”

McManis, himself, was very helpful to his rookie replacement, says Jones, generous with his time and his advice. “He gave me more than enough wisdom,” Jones said. “He went above and beyond when it came to that leadership role.”

“What a guy, what a football player.”

Because it was McManis’ bad fortune in suffering a knee injury that led to Jones’ making his debut as a Toronto starter, the rookie’s big break came with mixed emotions, the predominant one being disappointment for his teammate.

“Hate to see that he went down,” said Jones. “It makes me sick. But it also gives me a lot of motivation to come out and go as hard as I possibly can.”

The Argos will need that from Jones, as they attempt to derail Winnipeg’s bid for a third consecutive championship. “Great challenge,” Jones said, nodding.

And when you talk to Mace about how he feels about needing a rookie to patrol the place of a star veteran in the season’s biggest game, the coach expresses no uncertainty.

“The kid’s a football player,” said Mace. “He’s a playmaker. The moments don’t seem too big for him. We’re looking for him to have a good day (on Sunday).”

“Wild ride,” the rookie linebacker said. “I didn’t expect to even make it to the pros. I didn’t even expect to get to this level at all. Now that I’m here in the Grey Cup, this is a dream.”